The 7 best things to do in Doha, the capital of Qatar 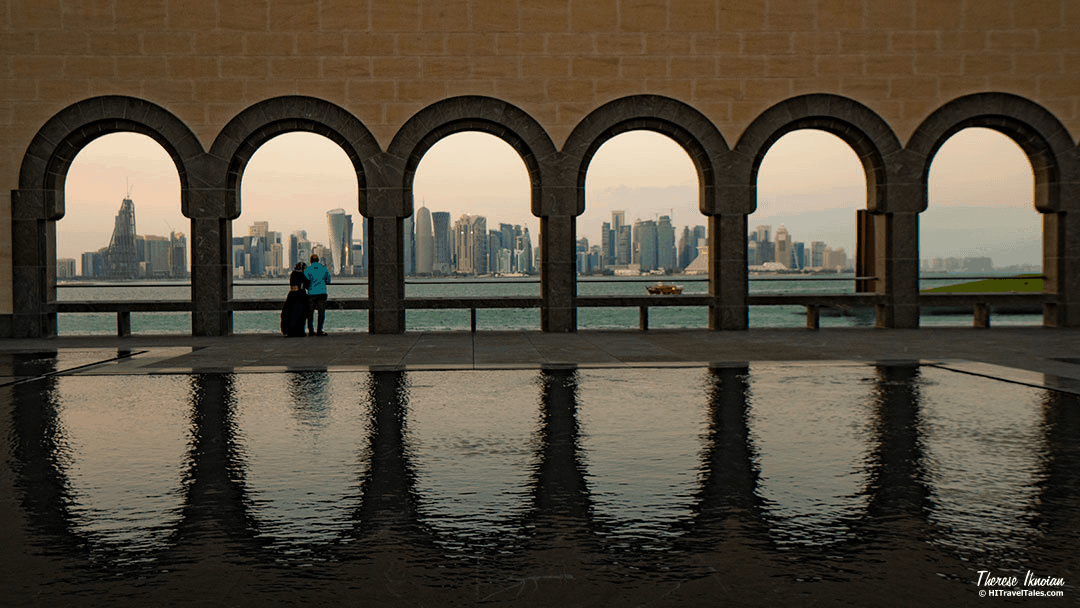 Doha is the capital of the tiny nation of Qatar located on the Persian Gulf. The dazzling skyline of the city keeps changing with the seemingly ever-present development and massive investments from the Qatari government and business leaders. Some of these iconic developments — the Museum of Islamic Art, the Doha Corniche, and the Pearl for example — have become massive tourist attractions and are considered some of best things to do in Doha.

There are so many things to do in Doha, now one of the fastest growing cities in the world, from cultural and historic to traditional and modern. And with all of the build-up and development because of Qatar hosting the 2022 FIFA World Cup, Doha, already worthy of a best place to travel nod, is now even more worthy of a visit.

Despite the air, land and sea blockade that started in mid-2017 as a result of a diplomatic tiff with Saudi Arabia, the United Arab Emirates, Bahrain and Egypt, Doha’s Hamad International Airport has become a significant transfer point connecting over 100 global destinations. Tourism has taken a hit, though, and visiting Doha as a final destination appears to be less common than it is to simply pass through.

As we were checking in for our Qatar Airways flight from Berlin to Doha, the agent asked us where we were headed. We said, “Doha,” quite cheerfully. To which he looked up at us and queried, “And then where?” Puzzled, we replied, “Just Doha.” The agent appeared surprised and responded with an “Oh?” that had a very “are you seriously just going to Doha?” sort of tone. 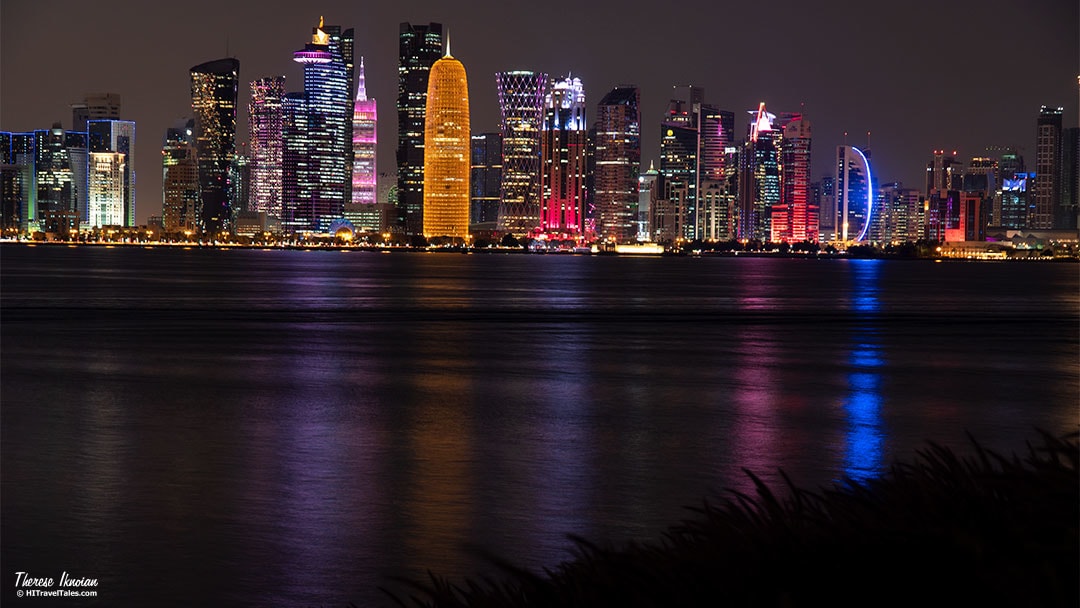 View of downtown Doha from MIA Park, behind the Museum of Islamic Art.

For those who wonder what to do in Doha even for just a day, we spent an amazing four days in Doha, including for Qatar’s National Day — and four days were hardly enough. We can say without hesitation that even if you are planning to transfer there, you should plan on at least 24 hours and preferably 48 hours (or more!) to explore the tiny Gulf nation of Qatar, still considered one of the safest countries in the world for tourists. Doha is a city of lights, with modern development and a rich culture that celebrates food, ethnic diversity, warm hospitality, and plenty of sunshine, while still struggling at times with its rise-to-riches past.

Our 7 best things to do in Doha 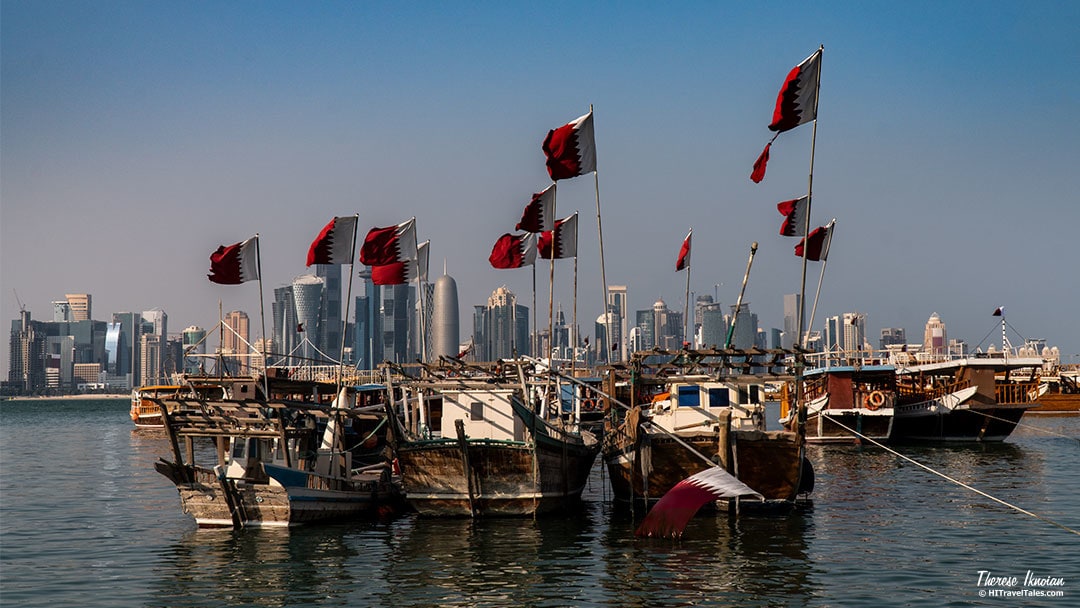 Looking toward the skyline of downtown Doha and at dhows from the Corniche.

In a city that is not so pedestrian-friendly, the 7-kilometer (4.3 miles) so-called “Corniche” crescent-shaped waterfront path becomes an exception. In the cooler morning and evening hours, the Corniche is filled with all nationalities enjoying a sit or a stroll. The best — and as a result the most photographed views along the Corniche — are from the water’s edge including around the Museum of Islamic Art at the south end with dhows (traditional sailing vessels) in the foreground and the spectacular skyline of Doha as a backdrop. If you wish to walk its length, we would recommend starting at Costa Coffee in “I Park” at the north end and then walking south toward the Museum of Islamic Art. Plan on about 1.5 to 2 hours for a leisurely stroll. 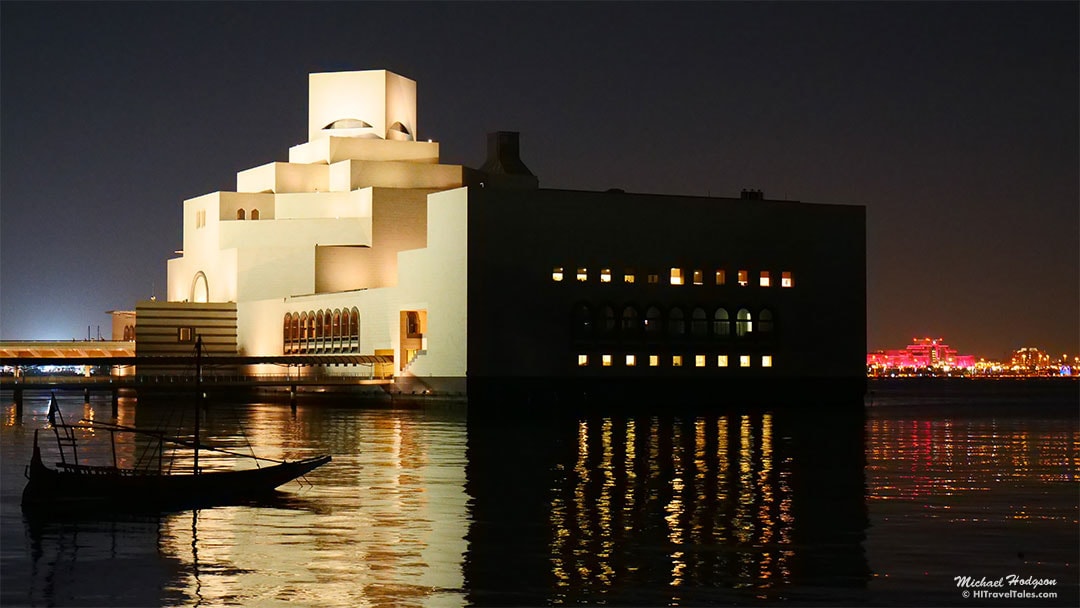 Night view of the Museum of Islamic Art with the lights of Doha across the harbor.

Designed by architect I.M. Pei, the Museum of Islamic Art is a stunning architectural landmark that stands out at one end of the Corniche. Inside are collections that present Islamic art from three continents. The building is a wonder unto itself. It stands on an artificial island that I.M. Pei “suggested” being constructed in order to ensure no other buildings would obstruct the view of either it or its views toward Doha. There are two outdoor patios that are a must see, located at either end of the museum. Both offer superb views of downtown Doha. The museum is free. Tip: At night the thick column at the top has slits that are lit so it somewhat resembles a woman wearing a hijab with a face veil – quite beautiful and eerie. 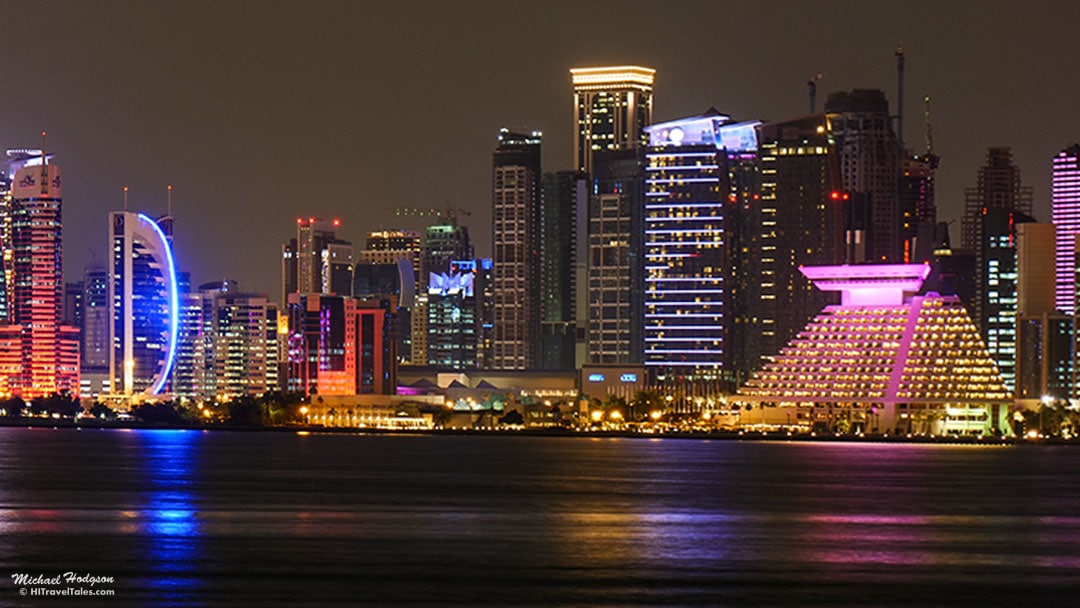 Colorful downtown Doha, as photographed from MIA Park, behind the Museum of Islamic Art.

Follow the path around the Museum of Islamic Art to enjoy this peaceful green space beside the Doha waterfront. At the far end of the park, just beyond the MIA Park Café (an outdoor café) sits a vertical steel sculpture, known as 7, by the sculpture Richard Serra. This was his first commissioned piece in the Middle East. Walk through the sculpture, made up of seven steel plates, stare up at the sky. Why seven? The number seven has special spiritual significance in both Islamic and Qatari culture. From the grassy hilltop in the park, nighttime views of downtown Doha are spectacular and very popular for couples, photographers and kids. 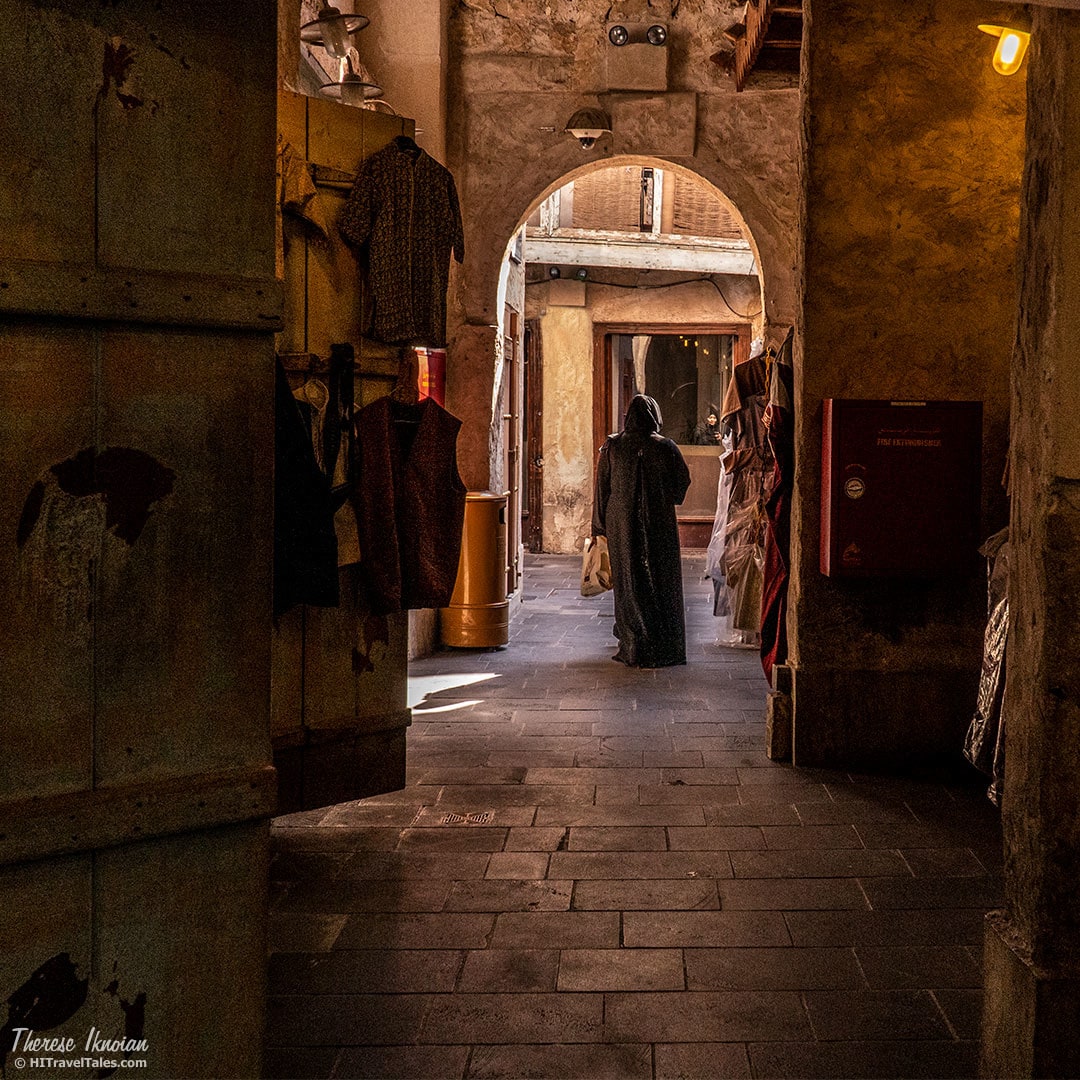 Inside the maze of passages of the Souk Waqif.

This is where the modern city of Doha meets an ancient market site, one where centuries ago, Bedouin would reportedly bring sheep and wool to trade. In 2003, much of the original market was destroyed in a fire, but a significant reconstruction effort resulted in the “new” buildings looking very much as they did in the 19th century with mud-walls, narrow alleys, and exposed timber beams. While the Souq Waqif has become a major tourist attraction, the primary purpose is that of a traditional marketplace where shoppers will find national Qatari dress, fabrics, spices, perfumes, incense and much more. Most shops and stalls in the Souq close around 1 pm and reopen at 4 pm, but the cafes and restaurants stay open all day. The best time to visit the Souq Waqif is in the late afternoon and early evening when the entire area really comes alive with people, music, and often performers. Be sure to turn off the main thoroughfares for a real feel. 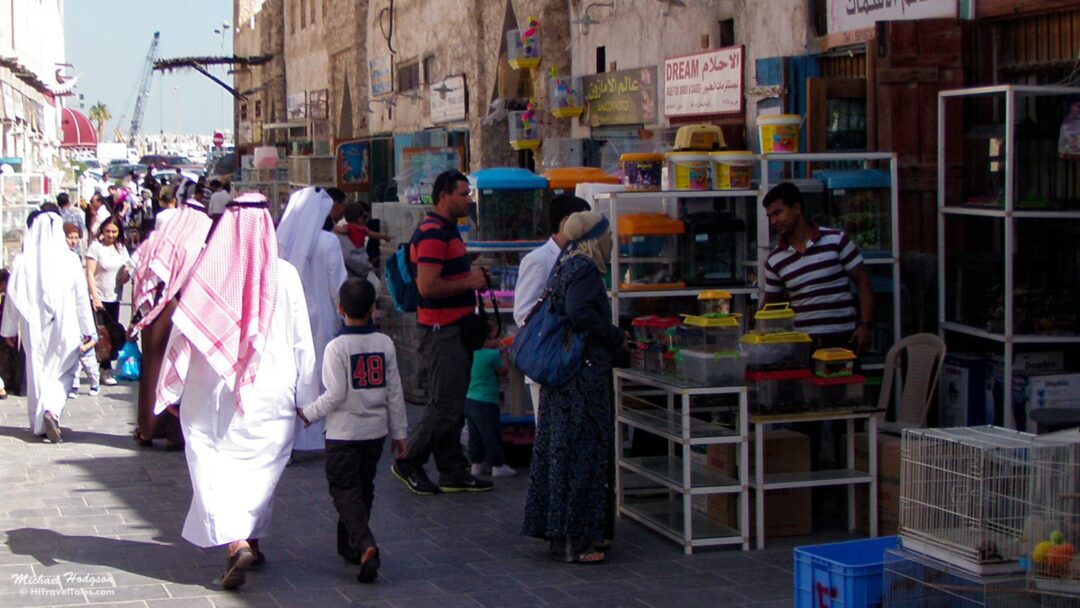 The pet market in the Souq Waqif … which may offend some Western minds. 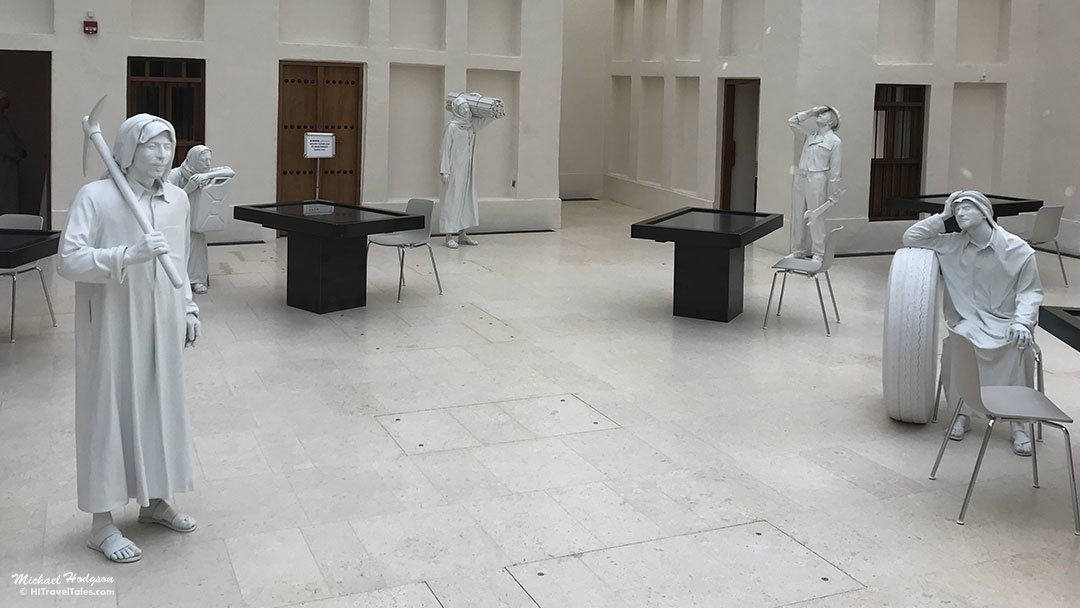 The Msheireb area is the world’s largest LEED gold development with 100 buildings constructed on the street footprint of the original city intended to become “downtown” Doha. Just a short walk from the Souk Waqif, the Msheireb Museums are actually four separate buildings. Each are somewhat near each other, but each somewhat frustratingly hard to find. Signs help but are also confusing. A map is hard to orient. Which is why you may find yourself chased down by a museum guard or attendant who is merely trying to help direct you and invite you inside. Each museum focuses on a different story Qatar’s history, culture and development. You will learn about the story of oil and gas exploration and its importance, pearl diving (once a primary economic driver for the country) and trade. In our view though, the most impactful and eye-opening museum is the one focused on slavery, including an honest look at Qatar’s part in this. The museums are free, and the areas around them are also worthy of a look. 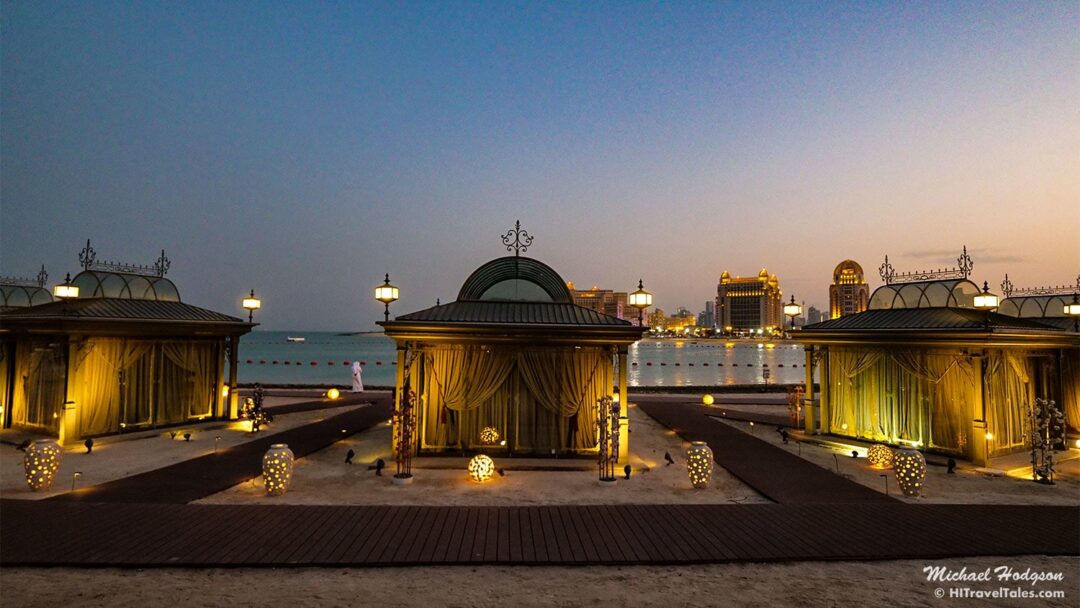 Located north of the corniche area, between downtown Doha’s West Bay to the south and The Pearl to the north, Katara Cultural Village is a shining diamond representing Qatar’s art, music and culture scene. This is where local students come to take music and art lessons, and where locals and tourists come to experience a vibrant music, art and food scene. There’s also a pretty spectacular beach too. Every building is a sandy yellow and each is modeled after traditional Qatari buildings, with the intent to reconnect the old with the new and the youth. The passageways are narrow and winding adding an element of mystery and wonder. Suspended overhead between the buildings are fabric canopies to help shade from the intense Gulf sun.

Dubbed the “Arabian Riviera” by locals, The Pearl is a very pedestrian-friendly artificial island that becomes a scene during cooler evenings and winter months as tourists along with the rich and famous mingle. Shaped like a pearl (hence the name) and covering approximately 1.5-square-miles, the island offers high-end cafes, restaurants and shops. Canals and bridges add to a bit of a Mediterranean feel, a little bit European, and indeed every bit contrived – very pleasant and fun to see, but still contrived. The promenade around the harbor is a nice place to wander and gaze at very expensive yachts.

HITT Tip: If you are simply connecting through Doha on Qatar Airways, and have a layover that affords you at least six hours between flights, Qatar Airways offers free tours of Doha (https://www.qatarairways.com/en/offers/doha-city-tour.html) where you can see the Museum of Islamic Arts, Souk Waqif and Katara Cultural Village. Tours can be booked by heading to the Doha City Tour desk in Concourse B. Each tour comes with a tourist visa (to expedite your return to the airport) and a bottle of water (It’s the desert, you’ll need it).

You’ll need to have a car or join a tour 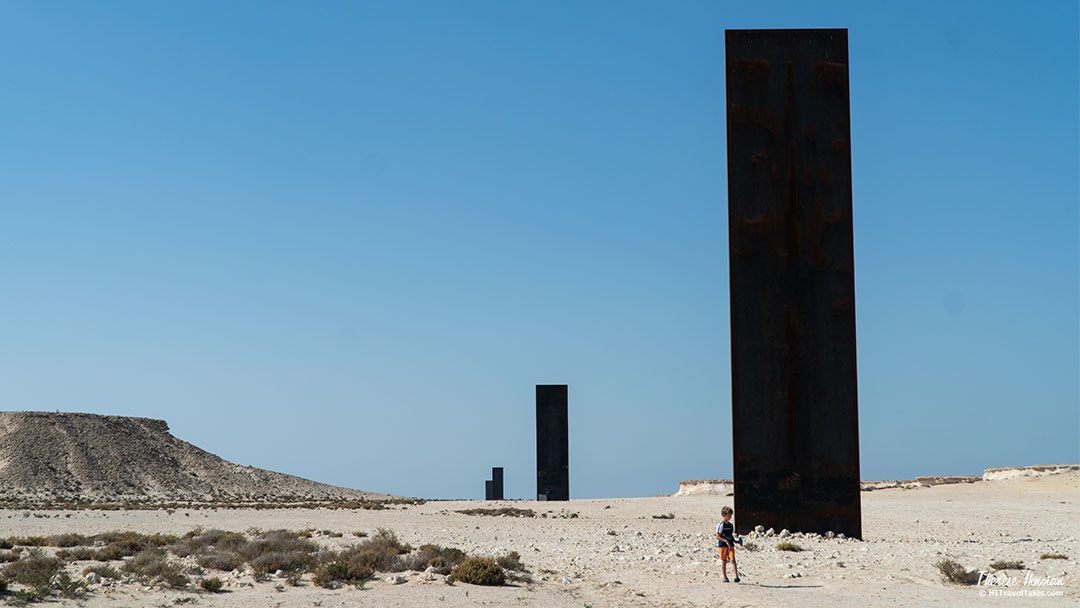 Located approximately 60 kilometers (37 miles) west and slightly north of Doha (at the peninsula’s other coast), here is where you will find the second of sculpture Richard Serra’s installations – East-West/West-East. The four massive steel plates, each 15 meters tall (just over 49 feet) stand like sentinels in a line, spread out evenly along a one-kilometer (0.6 mile) corridor between sandy ridges. 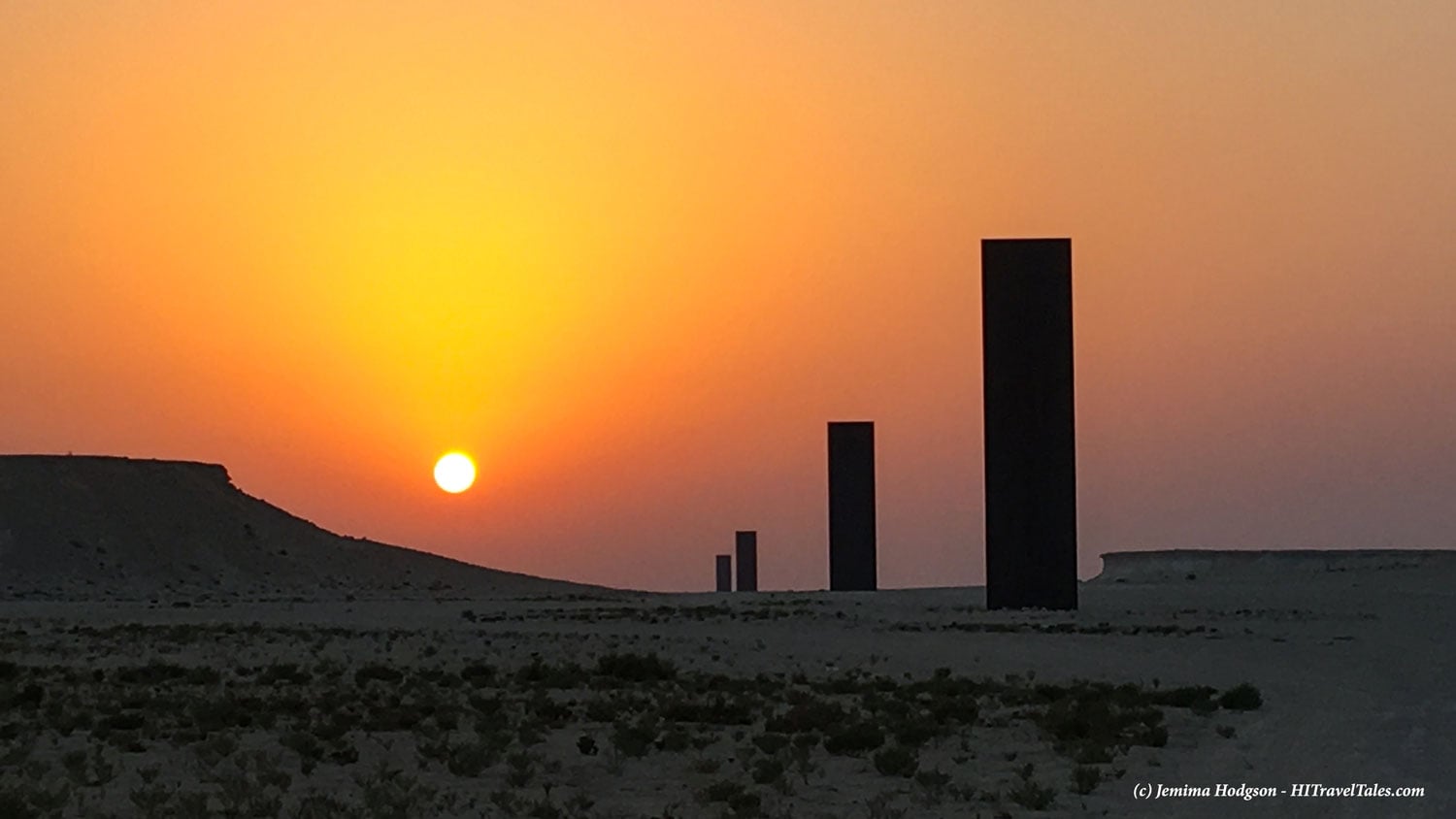 Not too far from here one can also find a replica village known as “Film City,” which is a fun to wander around and take photos. You are advised to go with a guide or rent a 4WD vehicle before driving to this area since it is not easy to find and easy to get lost. 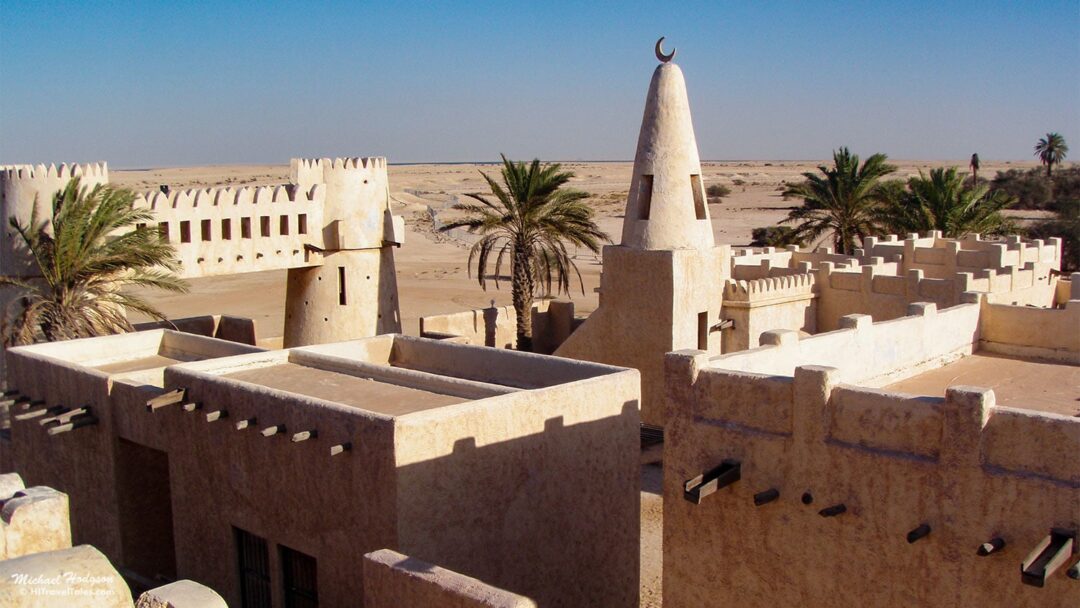 We didn’t get to visit Sheikh Faisal Museum on our last visit, but teachers at the American School in Qatar tell us this is a must-see and a place they take students and tourists to frequently. Named for a Qatari billionaire Sheikh Faisal Bin Qassim Al Thani, this museum is, quite simply, his private collection of random artifacts that fascinate him. Collectible cars, carpets, a completely furnished traditional Qatari home, a dhow boat replica, guns, swords, a dinosaur egg, … you name it. Is it one of the best things to do in Doha? You decide. 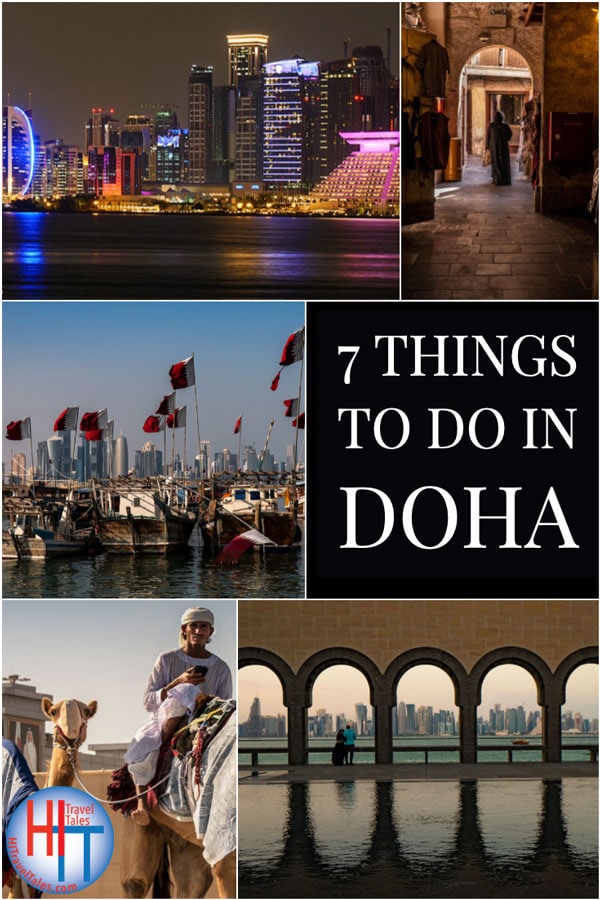 Heads up! This information on best things to do in Doha was accurate when we published it on HI Travel Tales, but, as we know, traveling is all about changes (and inflation, sadly). It is your sole responsibility to confirm prices, transportation schedules, hours of operation, safety and health considerations, and any other important details before your adventure.