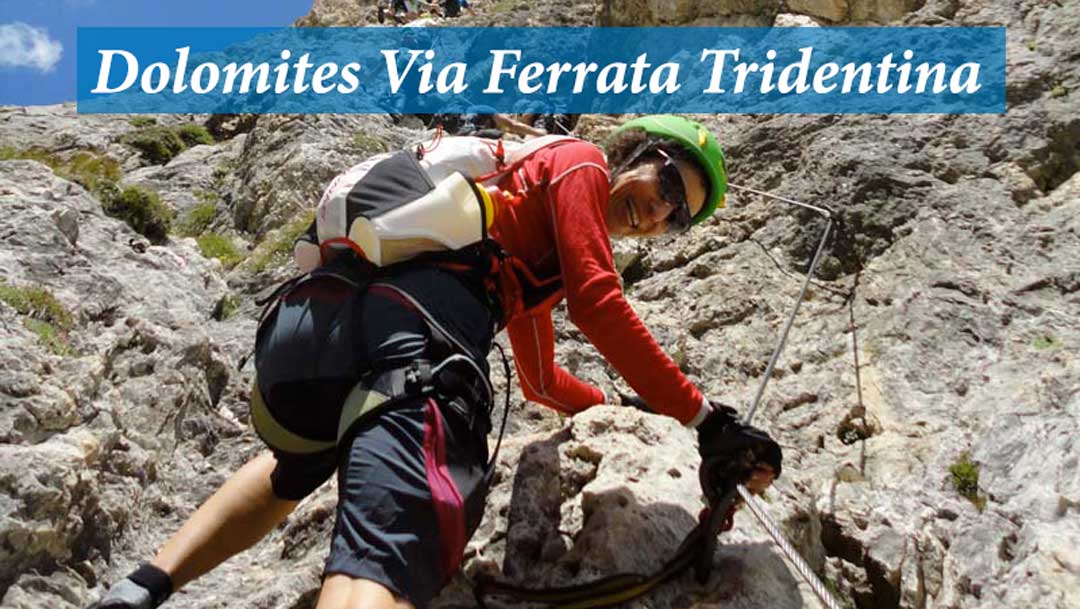 I stood at the bottom of the cliffs, staring up at my first Dolomites via ferrata, or “road with irons,” — the Via Ferrata Tridentina.

“Where does it go?” I asked the others with me as we slipped on our harnesses and helmets to head out on the Tridentina route in Italy’s Dolomites. I squinted into the sun, trying to make out any of the iron stairs, cables or ladders along the route on the rock face stretching to the sky above. “Can we see it from here? It doesn’t go straight up THAT, does it?” 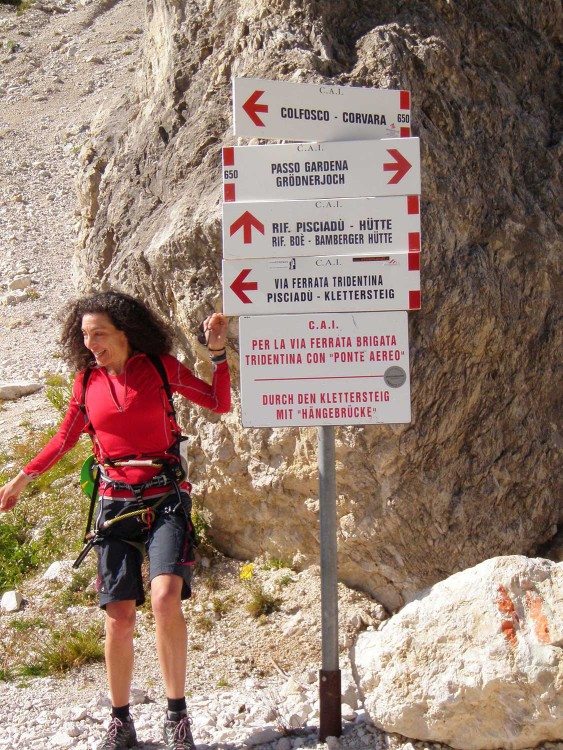 Wait … does the sign for the Via Ferrata Tridentina point straight up?

Towering over me was a craggy and, um, quite vertical chunk of rock. I’m not scared of heights but these spectacular Dolomite cliffs were definitely massive. Still, everybody was laughing and smiling as we prepared for the climb.

The day before, “Fede,” our Italian host with Salewa, told our group of about 25 retailers, sales reps and journalists, that the route had about 600 meters of vertical (2,000 feet, give or a take a few), and that it was a beginner route that would take us around 2 1/2 to 3 hours to complete. I felt reassured. All the others with me were climbers or heartier backcountry folks who had done a lot of vertical in one form or the other. I had climbed, but mostly in a gym on walls there were maybe 20-30 feet high. And the last time had been 10-12 years ago. In recent years, I had been most comfortable with my feet on terra firma either running or biking. But I was adventurous so what the heck…. If he said it was for beginners, all was good. I figured the others would just be bored.

I knew in general what a via ferrata was — “Klettersteig” in German: Climbing routes in the Alps that were put in mostly during World War I as a way to help soldiers ascend rocks to the peaks and protect their country. Difficulties vary with some being nearly sheer rock faces and others being rocky crags you could practically scramble up. To keep soldiers from falling off the rocks and dying – not kidding here – the troops began to install fixed cables, pins, ladders, bridges and other iron stuff..

Therese Iknoian high up on the Via Ferrata Tridentina — and still smiling.

Climbers on the routes wear harnesses with two lanyards attached; on the end of each is a self-locking carabiner. They slither up along the route, which is lined with thick cables. As you progress, you unclip one carabiner, move it forward in front of the pin in the rock that holds the cable down at intervals, and then, once it is locked on again, you unclip the other and move it forward also. That way you are always attached to the rock with at least one securely locked ‘biner. Or that’s the point at least. One brain-dead moment could be your last. But don’t think about that.

I had practiced the routine the day before on a short route – maybe 20 feet — that went straight up the side of the concrete wall at the new Salewa headquarters in Bolzano, Italy: Find a hold for your toes, grab either rock or iron with your fingers, then let go with one hand, unclip one carabiner, move it forward and lock it back down, unclip the second one and move it forward then lock it down. Then progress a few more feet and repeat the routine, keeping one carabiner clipped on securely at all times. It went well, once I got the hang of the rhythm of clipping and unclipping: Squeeze open, unclip, clip in, check with a little pull, squeeze, unclip, clip in, check with a little pull, inch forward a few feet, repeat. 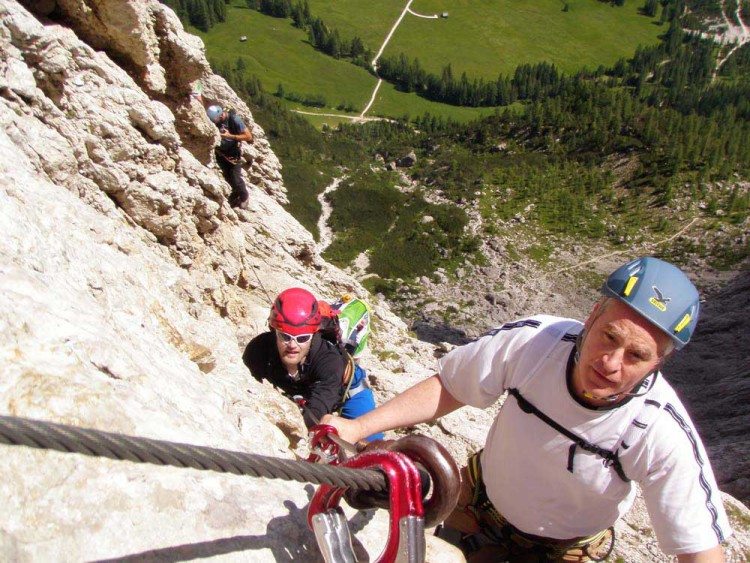 John Horsnell, veteran climber in white with blue helmet, and Aaron Provine of Backcountry.com in the red helmet peer up at Therese Iknoian, taking a money shot.

“Just don’t leave me behind,” I said as we prepared to start the real course the next day on Tridentina. No worries, I was told, we’re in no hurry. Dirk Bockelmann, a guide with Aspen Expeditions, stepped forward and said, “I’m going to be your personal guide.” He was a happy, relaxed guy and slipping in behind him, with sales rep and experienced climber John Horsnell behind me, was reassuring, for sure.

We hiked and scrambled a bit before we came to base of the climb. “When should I go?” I asked, as the others began to clip in and head up confidently. “Whenever you want,” Dirk said. “And remember to have fun and don’t grip too hard.”

OK, then, no time better than the present. I took a deep breath, clipped in and thought, hey, it’s a beginner route. I’m strong.

The first hour or so went well, and I relaxed quickly. Some of it seemed appropriate to just scramble sans carabiners, but I wasn’t going to dare that – yet. Dirk on the other hand was kinda scampering around me like a squirrel in a forest full of trees – up, down, over, up, light on his feet, and grinning the entire time. John came in behind me, and Aaron Provine of Backcountry.com right behind that.

“Hey, John, so how do you know the ladder-like pins and cables are in securely?” I asked as I kept the unclip-clip routine going.

“If the pin is kinda spinning in the rock, I’d avoid it,” he said with a grin to underscore how ridiculous his reminder sounded.

“So does anybody sort of oversee these things? You know, to make sure they are safe and secure each year?”

“I think the Italian Alpine clubs do that,” he answered.

“You THINK? Oh, that makes me feel real good.”

My ability to chat along the way changed about an hour or so out: The craggy rocks got steeper. Fully vertical ladders appeared. Ledges were fewer and fewer. The rock turned into sheerer faces where you have to search for a toe hold or finger grip. More muscle was called into action.

“Unclip, clip, unclip, clip,” I said to myself over and over. I exhaled deeply and heaved myself up another section. Remember, this is a beginner route. They wouldn’t take us up anything else, right? I mean, it would be really bad form to lose a retailer or a journalist on a company trip. Right? Not good press to wipe up somebody from the rocks below. It’s a beginner route…. RIGHT?

“WOW!” I’d say I in places where I dared to actually look down at the view. Dirk scrambled ahead and took way too many photos of me, even asking me to pull backward and hang at one point so I looked as if I was just hanging over nothing – which I was.

“Hey Dirk, is there going to be a board at the top with all the photos printed, lined-up, and numbered for me to buy?”

I managed a few photos but the sketchier it got, the less my camera was pulled out. 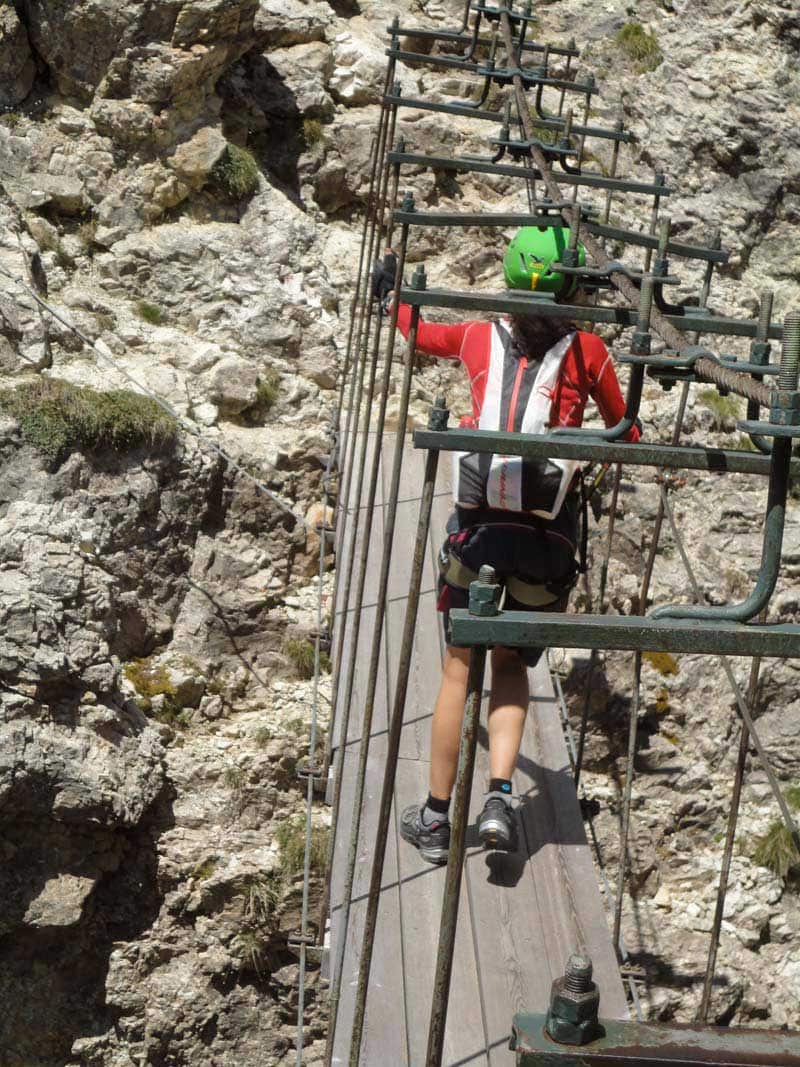 Therese Iknoian braves the swinging bridge on this Dolomites Via Ferrata.

Soon, we came around a corner and to a swinging bridge, maybe 20 feet long – looking as if it were a remnant of the Italian army from WWI. “Oh my!” I said, stopping briefly to assess. “Oh my.” The top of the route was nearly in view, and I knew the drop off below the bridge was really far, but I wasn’t about to peer down. I crept toward the bridge, leaving John and Aaron on one side. “Nobody gets to be on the bridge at the same time!” I yelled back. If I felt these thin board bounce for any reason, I’d have a heart attack. Dirk had completed his little scamper act across it and waited on the other side. 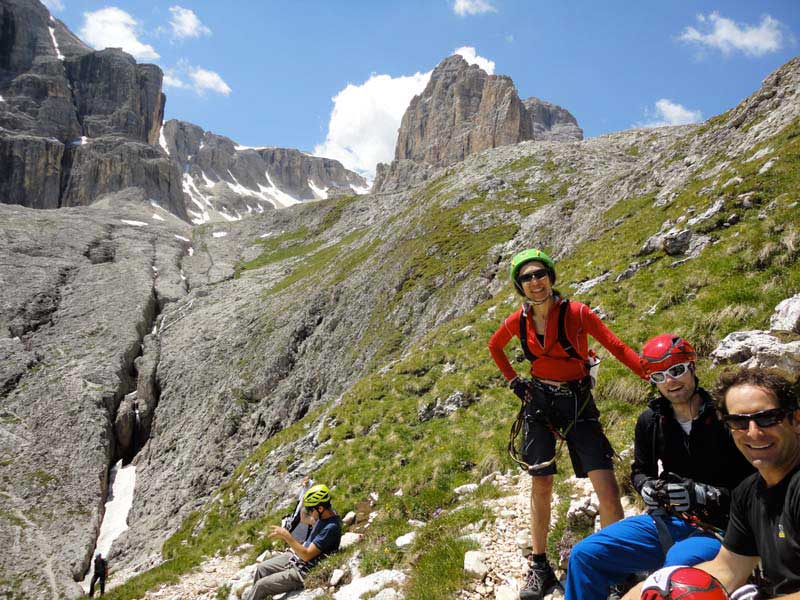 Unclipped and smiling, the author, left, with Aaron in the red helmet, and Chris Denny, far right.

I’m part way across when John said, “Hey, look there,” likely pointing down at something or another in the valley that was now close to 2,000 feet below me.

“I’M NOT LOOKING DOWN!” I yelled back, keeping my eyes glued firmly ahead and away from those rickety boards. My forearms were starting to get sore from the unclip-clip routine, which could thankfully continue across the little bridge with horizontal cables. Dirk’s camera was out again.

“That’s the money shot,” he said — for about the 10th time. I reached the other side and tried to not appear too eager to be on solid ground again.

Then the next two start across. And what do they do? They start swinging the bridge. On purpose. Kinda jumping up and down. I may not be afraid of heights, but there are limits, you know?

On the other side, I can’t see much above me with the overhanging rocks. Gotta almost be there, you think? It’s been more than 2 ½ hours. Then, all at once, the cables end. And I’m there! I unclipped for the last time. The Hut Pisciadu, our lunchtime goal, is just across a rocky field, itself clinging to the scantiest edge of the mountaintop. 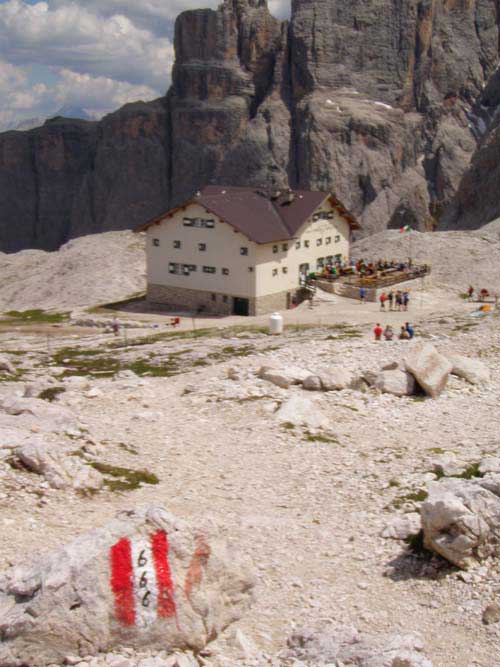 The Hut Pisciadu at the top of the Dolomites Via Ferrata Tridentina.

The rocky field is littered with clusters of alpine wildflowers in pink, blue, white, yellow, purple. WOW, I said agaiin…for about the hundredth time.

We took a long break enjoying the camaraderie of accomplishment flavored with food and beer – I didn’t think fried potatoes topped with a fried egg could taste so good. 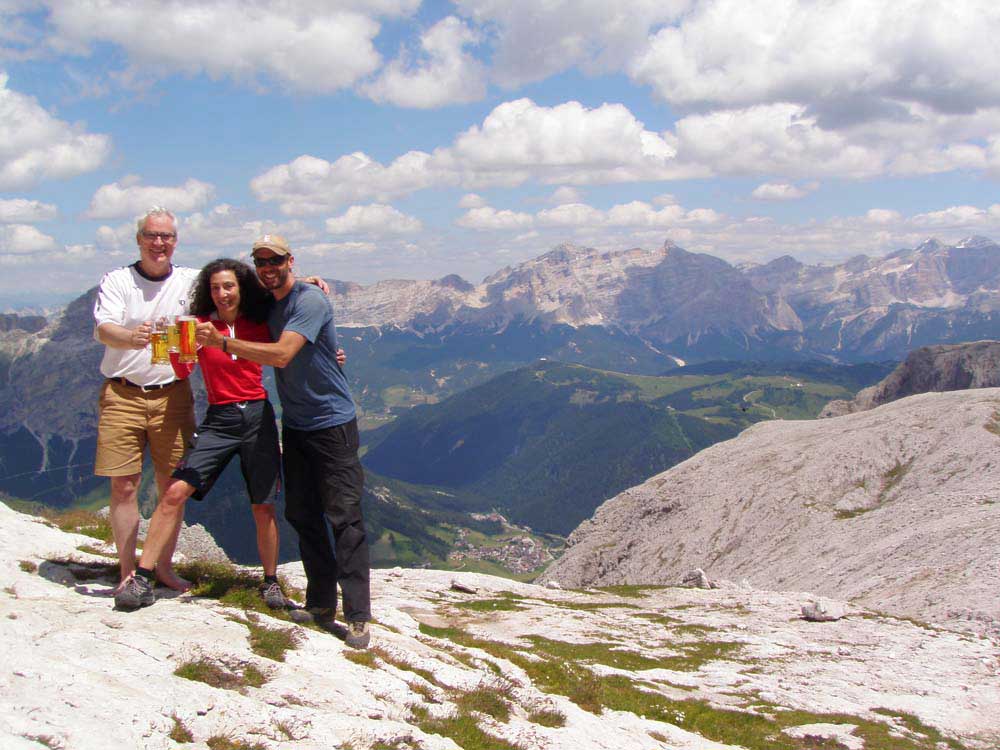 Was this really a “baby via ferrata” as the Italians gallantly called it? Not so sure. Seems there isn’t really any one agreed-upon rating system for the difficulty of a via ferrata. Rather there are several. I go searching and find a Wikipedia page just on this one route. OK, it’s in Italian, but here’s what it said:

I saw the “abbastanza difficuile” and “una buona experienza” and thought, whoa, mama, that wasn’t no baby route.

Translated it became this:

Heads up! This information about this Dolomites Via Ferrata Tridentina was accurate when we published it on HI Travel Tales, but, as we know, adventure travel and traveling is all about changes (and inflation, sadly). Please be sure to confirm prices, transportation schedules, hours of operation, safety and health considerations, request for perfect weather during your entire visit, and any other important details before your adventure. 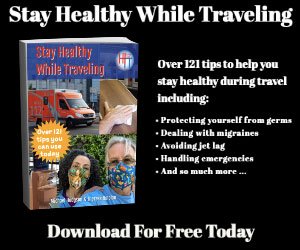