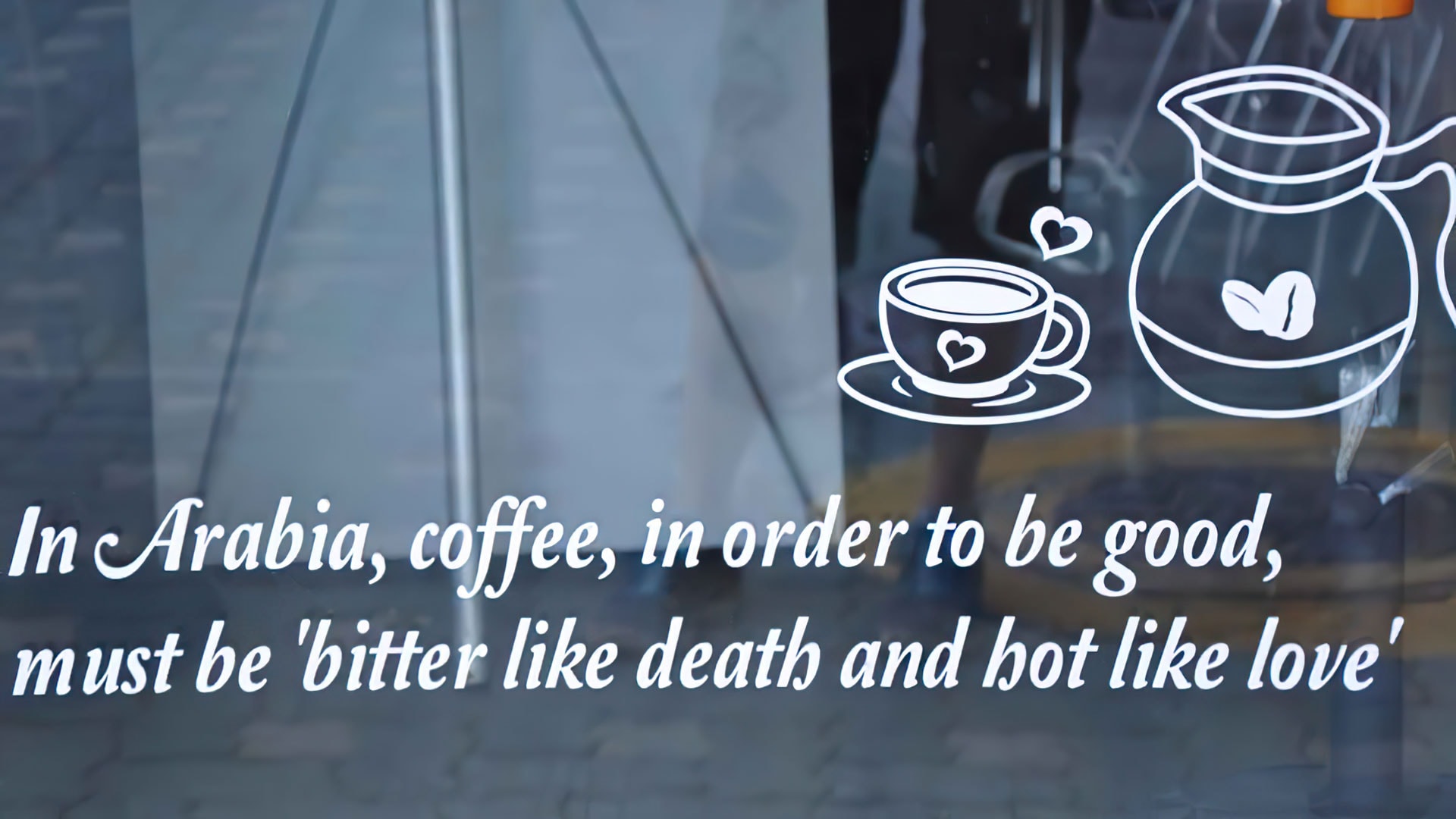 We have experienced coffee culture around the world. We’ve sampled various ways of serving the caffeinated elixir, from nearly syrupy dark tablespoons of caffeine in doll-sized cups to huge bowls of espresso and frothy milk. It’s what you do as a traveler – enjoy a cup of local coffee as the locals enjoy it. What is fascinating is indeed how much the world (well, much of it) loves a cup of coffee. And sharing a cup of java can actually break down international barriers. But what is also fascinating is the culture of coffee in different countries.

Turns out coffee is good for you too – A study out on July 10, 2017, by the respected Annals of Internal Medicine journal found that those who drink more coffee have a significantly lower risk of death. Yup, drink coffee, live longer, it seems. The findings from the studies that looked at consumption in 10 European countries and by different ethnicities were the same no matter what color your skin or what country you lived in. And it was the same whether you drank caffeinated or decaffeinated brews. And those who drank three or more cups a day gained the most benefit in health gains and a longer life. Why? Still uncertain, but this and other past studies noted it could be because of the antioxidant effect from caffeine’s polyphenols. 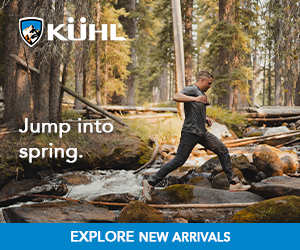 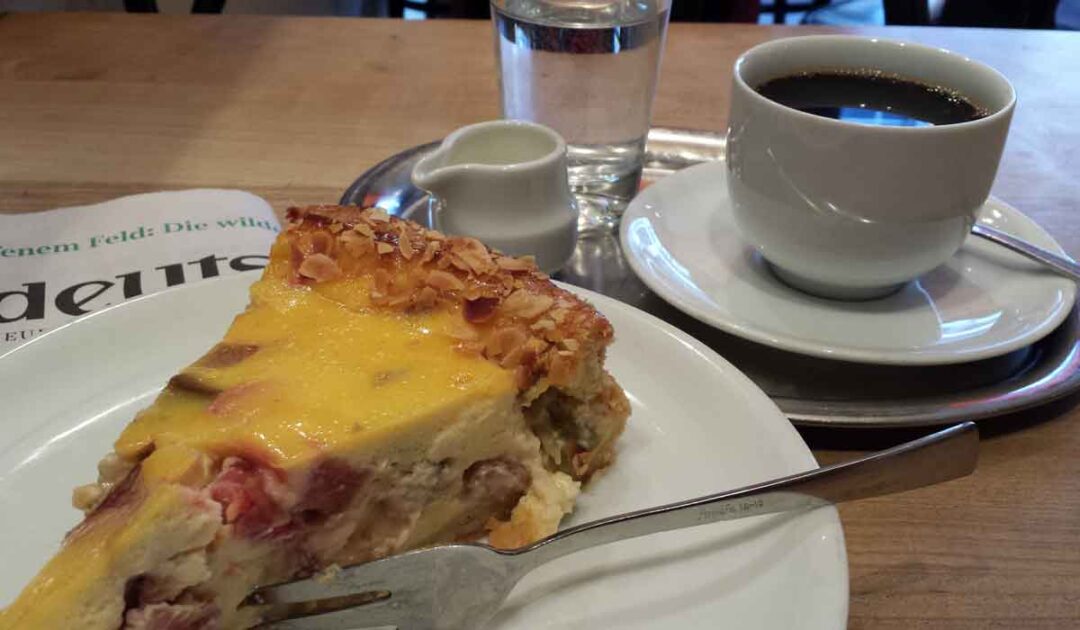 When in Germany, Austria or Switzerland, a piece of cake is a must with that afternoon. Try a cherry-rhubarb cheesecake!

Now, what’s not to like about these results? In honor of discovering that coffee is good for you and helps you live longer and stay healthy, we are taking a short look at the coffee culture in a few European countries. Take good notes on what a nation deems appropriate and how and when they drink coffee, and you will blend right in like the savvy traveler you of course are.

Austria/Germany/Switzerland – I apologize in advance for lumping these three countries together since they are really so different. But when it comes to the coffee culture they are also so similar (well, OK, the French- and Italian-speaking parts of Switzerland do have similarities to their bordering countries). Drink whatever form of coffee you like – from black to espresso to cappuccinos – whenever you like. All day perhaps. Coffee is what they do and the coffee is quite excellent (in most cases). What sets these countries (and a few others apart) is the tradition of afternoon coffee that means so much more than a cup of black brew. To be asked if you want to “have coffee” often means there will be cakes, tarts, strudels or other baked goods involved. “Kaffee trinken” is a reverent thing in this corner of the world, especially on weekend afternoons. It’s treated a bit like the quintessential English teatime: You may be hungry by mid- to late afternoon so why not have a piece of cake to tide you over? We’re in! 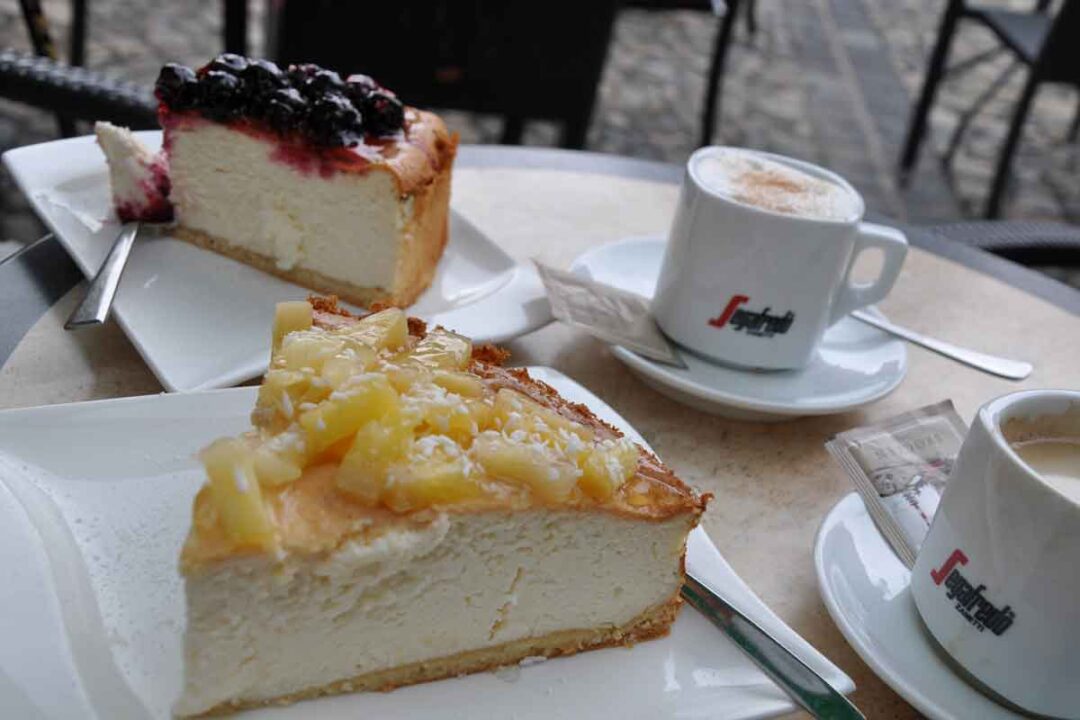 The best recovery after a long hike is afternoon coffee and cake (in this case, a ridiculously huge piece of cheesecake – yes, we took half back to our room). This sort of sit down in late afternoon in Germany is referred to as “having Kaffee” but somehow that Kuchen (cake) always slips in too.

HITT Tip: What we do find a bit sad is how coffee used to mean sitting down properly, while getting your java in a to-go cup to run out the door meant raised eyebrows and a surprised shake of the head. Now “to go” is much more common. Sigh.

England – Blimey, but times do change! The Brits are now drinking more coffee than tea. This tea-loving nation is experiencing a coffee culture surge in the last decade, thanks to Wi-Fi-loving youth and a socially focused café experience that is replacing what is seen as the aging pub. Rest easy, though, tea is far from dead, and since there are also antioxidants in black tea, we’ll take that as approval to mention English tea here too. By late afternoon, it’s time to tide yourself over until supper with a hot cup of tea (or, yes, perhaps, coffee) and some biscuits, sandwiches or cakes. Know that to many, “tea” refers to a time of day, and not just the beverage. More than half of people in England drink tea with milk – sort of a “tea au lait” if you will – but you need to pour the milk in the cup first, then add the tea. And you better make that cup properly as described by the Royal Society of Chemistry. Coffee too is served with milk more often than not, but you won’t get a grimace if you order it black. 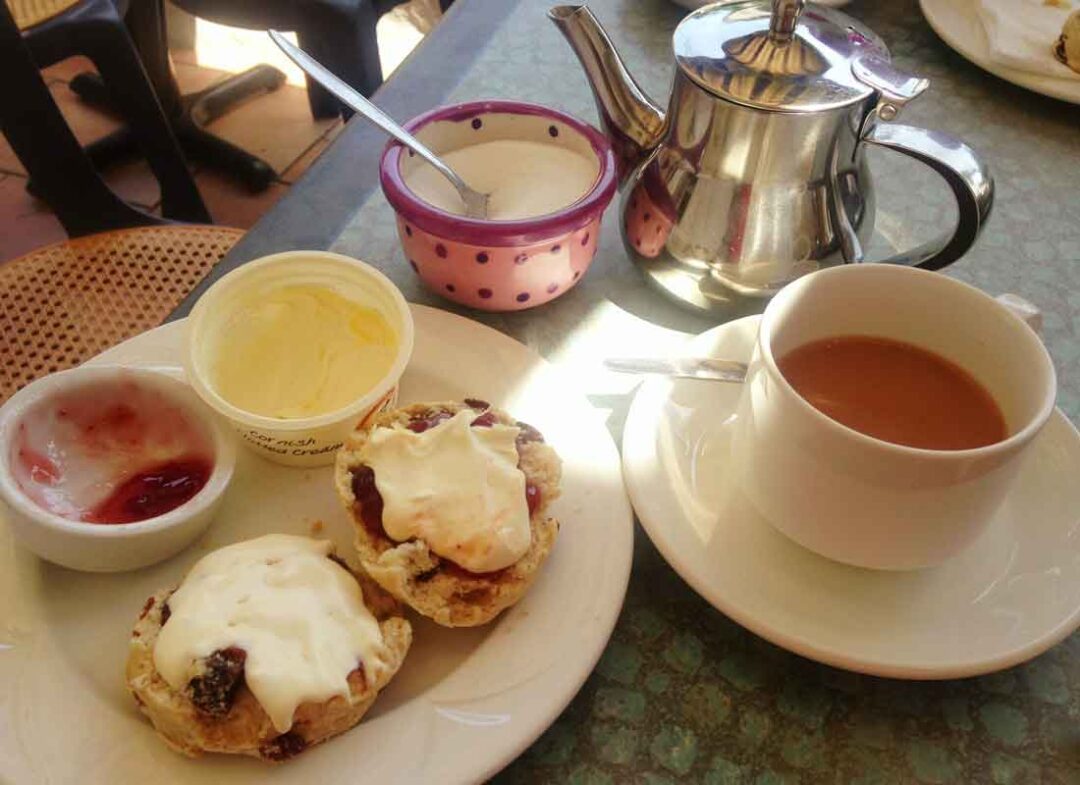 A proper afternoon tea in Cornwall with clotted cream slathered on scones with strawberry jam, and of course, tea … Ssshhhh, I was having coffee!

HITT Tip: England with its continued tea obsession is actually in the majority globally. A chart from Pew Research shows clearly that coffee remains a western tradition, while most of Asia and the countries of the former Soviet Union lean toward tea. Want to know more about the origins of coffee? A good coffee explanation is found here.

France – In this country, you traditionally have a “café au lait” with breakfast (a large bowl-like mug filled half with coffee and half with warm milk. Not to say you can’t have an espresso or a regular cup of coffee too. Since French breakfasts are traditionally a baguette with butter and jam, or a croissant, I have this suspicion that big mug of warm milk is thought to round out the meal. But I don’t know that. Later in the day, if you go into a café or bistro and order “un café” you will almost without fail get a small, potent espresso (a.k.a “un express”). Since I tend to like to sip and not gulp it like medicine, I like to order “un café allongé.” You get a larger cup with espresso to which you can add hot water given you on the side to your taste.

HITT Tip: Standing at a bar in a café in most countries – particularly Italy and France – is the way many get their quick dose of caffeine. And pay less. Yes, if you don’t take a table you will pay less for your joe. 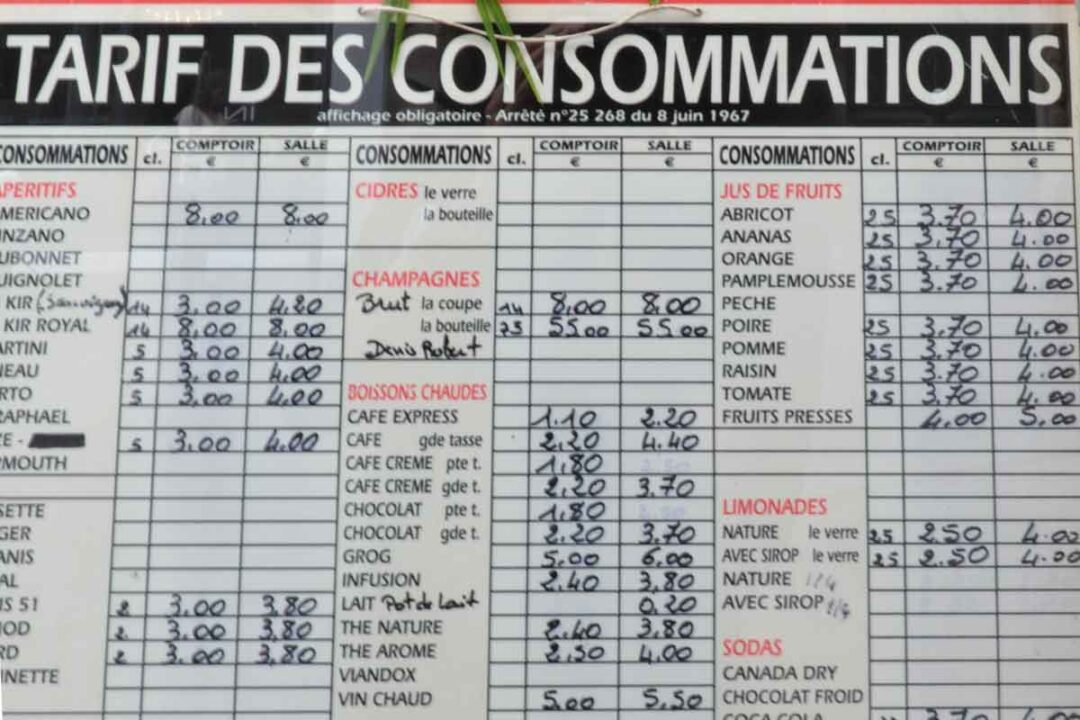 Note the price difference on the menu — at the bar (comptoir) is as we note usually cheaper than seated (salle) — not insignificantly!

Italy – Ah, Italy, for such a seemingly laid-back country, we have never seen such shock at ordering a cappuccino after lunch. Gasps all the way around. We quickly learned that “one does not drink” cappuccinos or any caffeine beverage with milk after breakfast or perhaps after about mid-morning. Never. Period. Don’t dream of it. Later in the day, such as after lunch or dinner, it is all about a thick dark very short brew. Be prepared for shock if you want otherwise; apologize in advance; and know you will be fodder for a story that evening somewhere. You will see people streaming into coffee shops to order “un caffè” (not an espresso, puuuleease), and they take it like a drug, standing up at the counter, put in plenty of sugar, lift the doll-sized cup, and sling it back with a backward toss of the head. Done. Go on with your day. What is this dawdle and sip thing you Americans do? And why would we dilute the pure caffeine with cakes or crumpets? 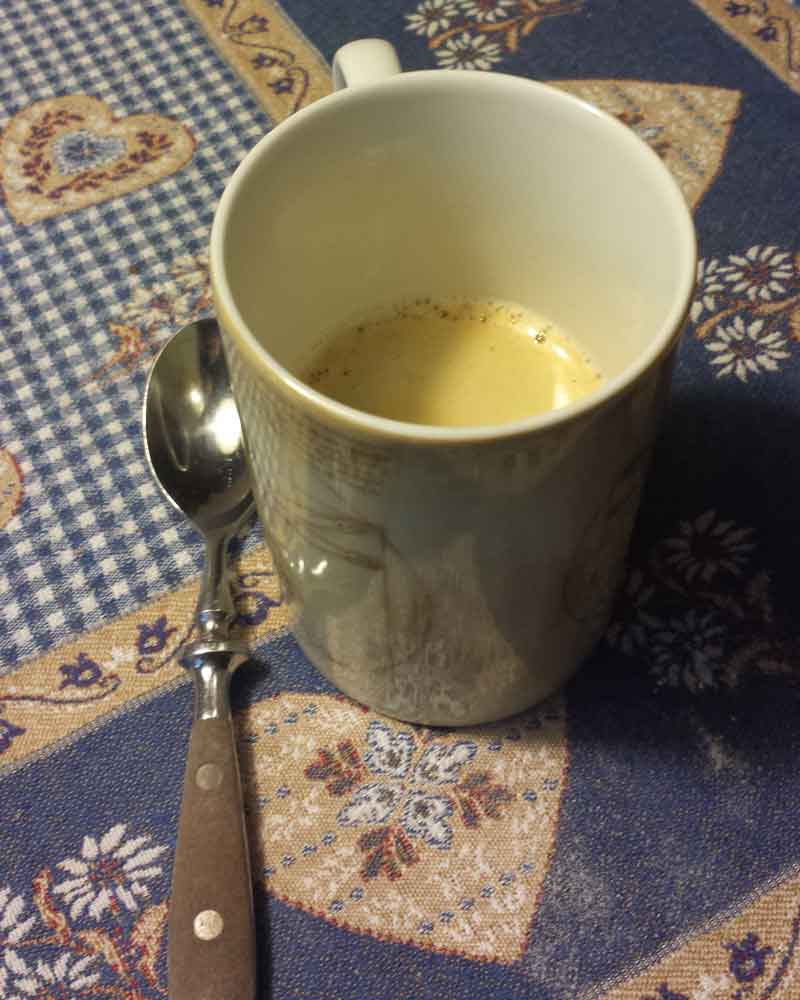 Yes, this is a cup of coffee in Italy…. Flavor, outstanding, but can we have more please?

HITT Tip: Take a look at Oxford Dictionary’s blog post on coffee terminology to help round out your vocabulary.

Spain – Hot days, late sunsets, steamy cups of java all day long, however you like it. In the morning, it may more likely be a cafe con leche (espresso with milk, much like is drunk in France). Although they too tend toward the milky version in the morning and sway toward the potent black little cups of espresso after lunch and in the afternoon, you won’t get a raised eyebrow if you want the leche in your coffee later either. Breakfast may only be a warm flaky croissant with that caffeine (maybe because they eat dinner so late they aren’t ready for more?). But a strong shot of caffeine toward what we Americans would call “dinner time” is just a warm-up to stay awake for dinner hours later … around 10 p.m. or so.

We want to know why a watered-down coffee in the rest of the world is named after America? In fact, only recently I was in France and the host at my bed and breakfast wanted to know how I liked my coffee. When I said, strong and black, he said, “Oh, so not American.” There you have it. Whatever way you like it, now you know you’ll also live longer. Want to be sure you can always make an excellent cup of coffee no matter where in the world you are? Then read our story, A perfect travel coffee maker: The coffee fix for travelers.

HITT Tip: Are you a science geek? OK, OK, here are the links to the study abstracts from the Annals of Internal Medicine from July 2017. This one is about coffee in 10 European countries and the second study is about coffee consumption in non-white populations. Or perhaps you are seeking a bit of “coffee must be good for me” nutrition validation? Then you might be interested in this story. 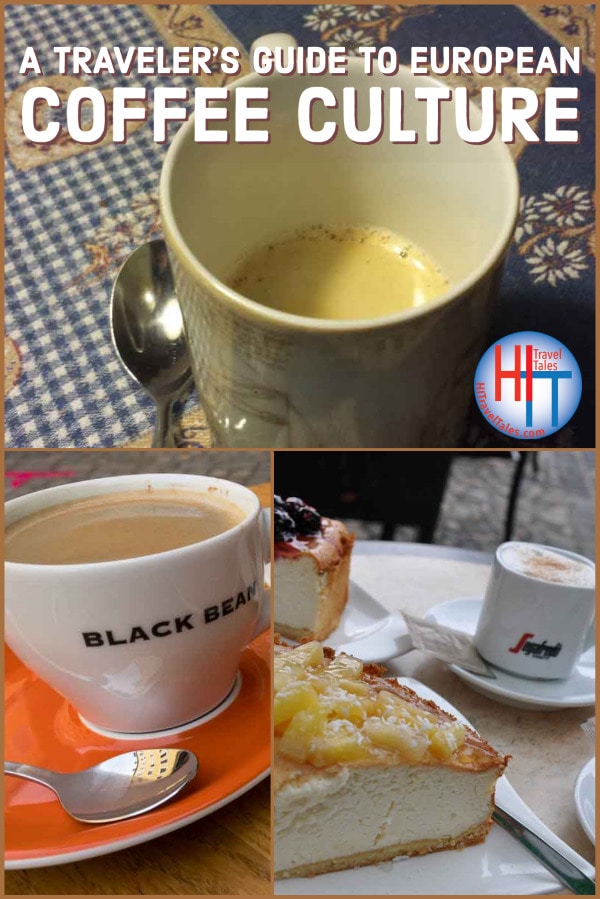 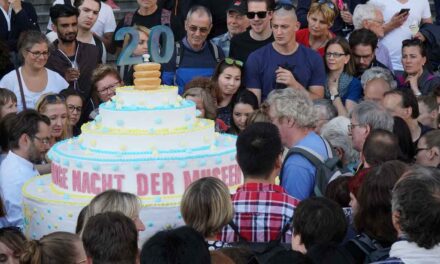 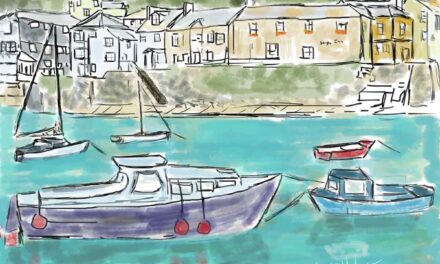