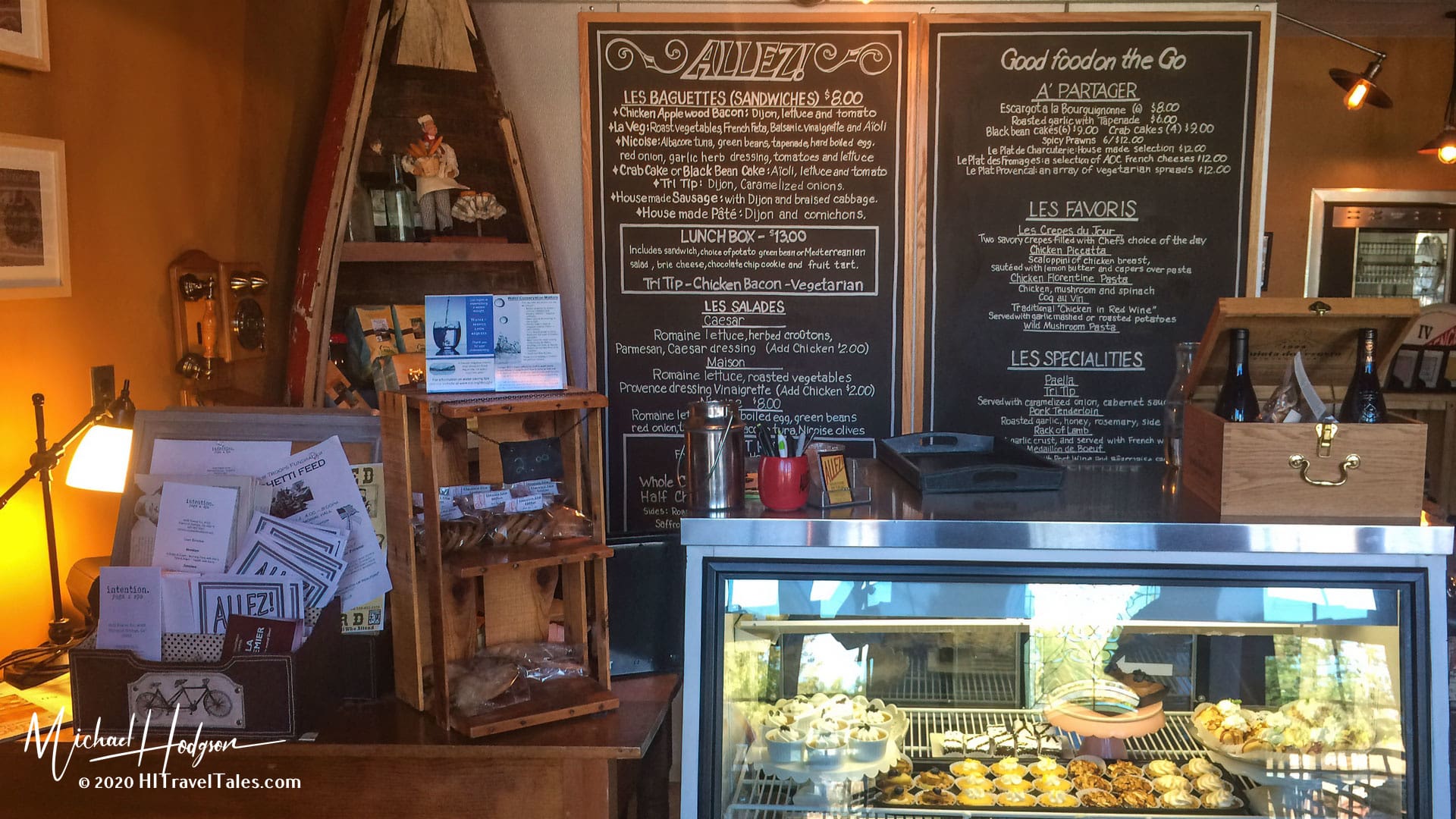 Allez “Good Food on the Go” is a delightful French bistro/restaurant located in the Gold Country town of Diamond Springs, near Placerville in Northern California. In addition to delicious French cuisine served in its rustic dining room or to go, Allez French restaurant offers local and imported cheese, wine and wonderful desserts.

We could not have imagined what French culinary delight we were about to experience as we walked to the front door of Allez!  Located just a few minutes from Placerville in the California Gold Country not far from Sacramento, Allez French restaurant is an intimate bistro owned and operated by Christian and Jennifer Masse. Christian is as French as they come — and Allez’s chef. One of his two sons, Shane, was also working the day we arrived at the building where the cafe moved in 2012. It had just enough “quaint” to offer a casual European bistro feel. 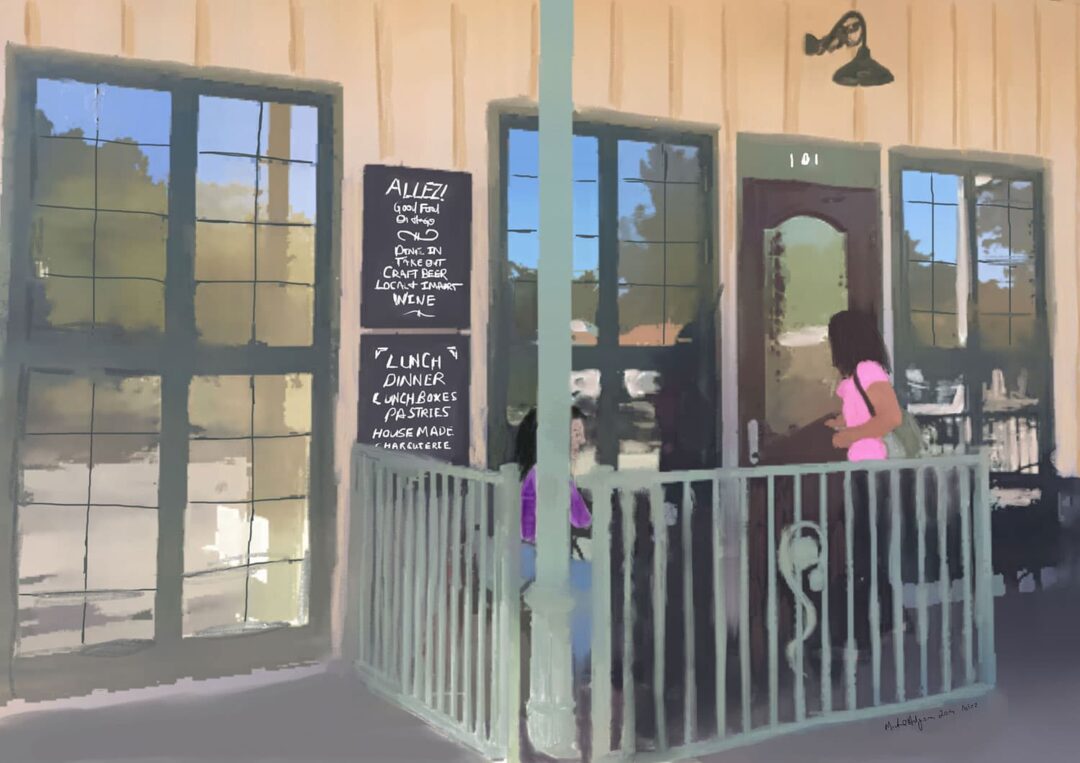 Allez French restaurant is a delight – both elegant and casual in atmosphere and the service is superb. This illustration of the front entrance and outside seating is by Michael Hodgson. View more of Michael’s art at https://michael-hodgson.artistwebsites.com/

We were greeted at the counter by Michael Masters, a passionate and culinary-academy trained pastry chef who was also working as the greeter/waiter/front-of-house person. Masters has been working for Christian since he graduated from the Culinary Academy in San Francisco, seven years ago. His professionalism, and knowledge and enthusiasm for the food — and Allez! — showed immediately. He encouraged us to sit at an outside table where he would join us to explain the menu, the food style and cooking techniques, and answer any questions we might have. He even brought water for our dog, Kayla, who admittedly turned up her nose at the tureen-style pottery bowl but gladly accepted love from him and all the other patrons. 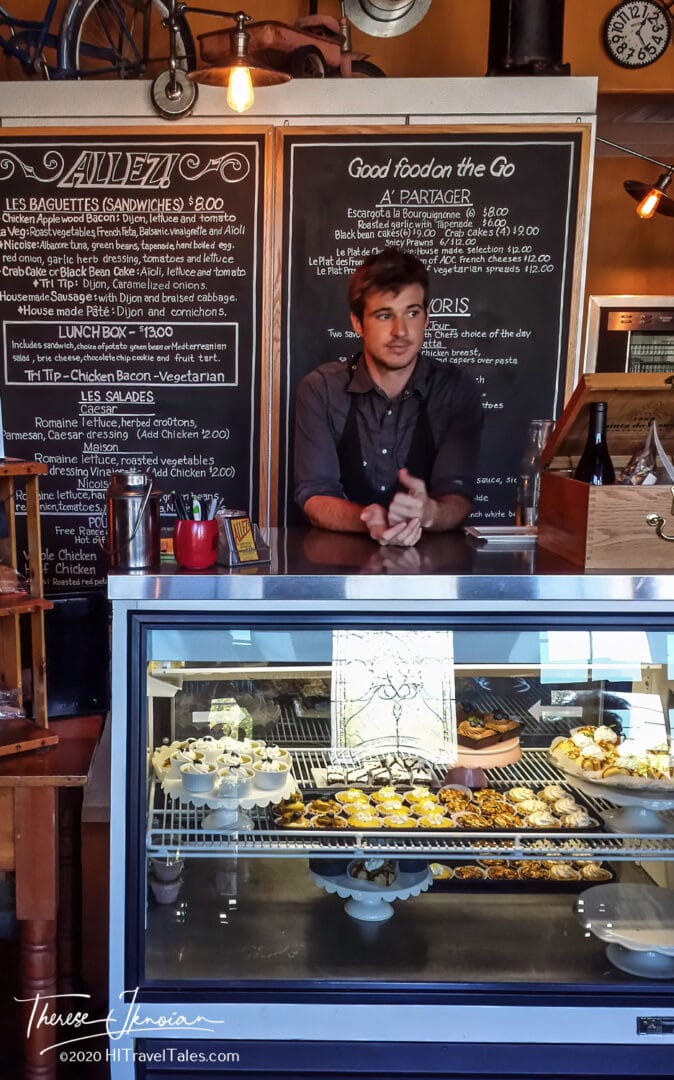 Michael Masters behind the pastry counter at Allez French restaurant

The setting was surprisingly quiet, and Masters’ made us feel right at home, explaining the food choices, making recommendations in a friendly, definitely unpretentious, yet decidedly informed way.

She ordered the chevre chaud salad ($8), and he ordered the seafood crepe special ($14) — no way he was turning down cream sauce and fresh fish flown in from Hawaii that day prepared by a French chef! And she was smitten with warm goat cheese baked on baguette slices with crunchy pancetta and toasted walnuts. We reluctantly turned down wine from a concise yet inclusive list that was obviously carefully chosen to include local and French selections.

We watched yoga students coming and going from the studio next door – with a detour for lunch at Allez! – until our food arrived – and, mind you, this is not fast food. At that point, our love affair with Allez! only deepened. The presentation was elegant, but casual. The flavors were simple, yet remarkably complex. He had not enjoyed a crepe this much since, well, eating one in France several years ago. She’d comment on the salad, but was too busy making “oooing” and “aahing” noises. 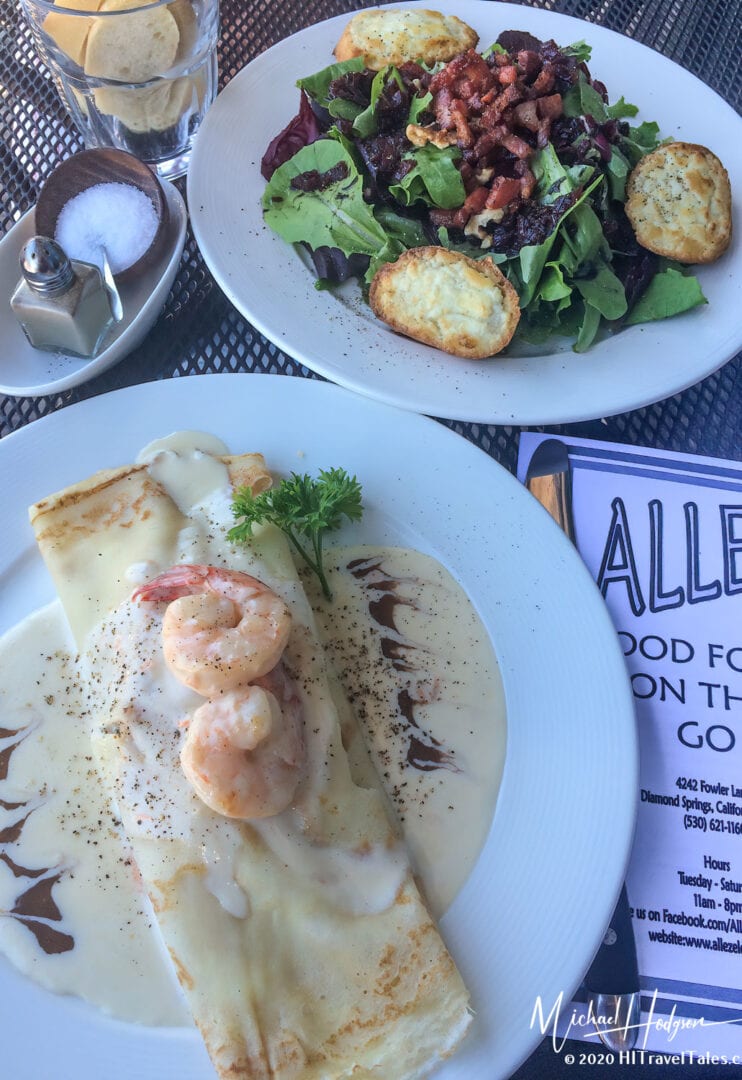 Allez! – offering a plentiful lunch box item and foods packed to go, has a history as a take-out place – hence, the name “Allez,” which means “let’s go” or “come on” – until it moved to this location. Still, the space is cozy and compact — three tables outside, plus perhaps another five tables inside plus a six-seat wine bar. The menu is also compact but not limited by anything other than by Christian’s imagination it appears – main dinner items rotate for variety and other items change with the seasons (look for a popular Cassoulet in cooler weather, for example). The food is simple, with French and American influences that meld into an offering that is affordable, approachable and delicious.

Do not miss dessert here, as the pastries by Michael are delectable – and they leap out the door apparently; he told us he had sold 115 the day before alone. They are also small and priced at $2 each to encourage sampling – for example, dark chocolate with toasted almonds, lemon or apple tarts, or a plate of three golf-ball-sized pastry balls with a drizzle of hardened caramel sauce for crunch (his grandmother’s recipe, he noted proudly). 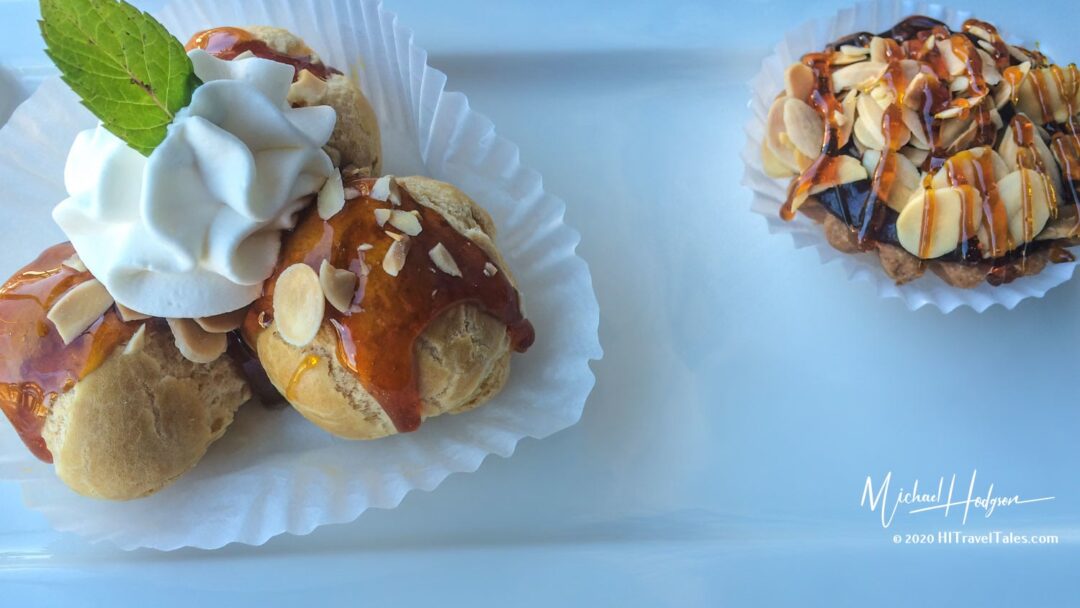 The total bill was just $28.49, including tax, for our lunch plus one gourmet soda and a dessert. With the quality of the food and service, combined with the casual yet elegant feel of the restaurant, little wonder Allez! garners rave reviews from almost every guest. HI Travel Tales now counts among them.

Learn more about Allez French restaurant including the current menu at www.allezeldorado.com. 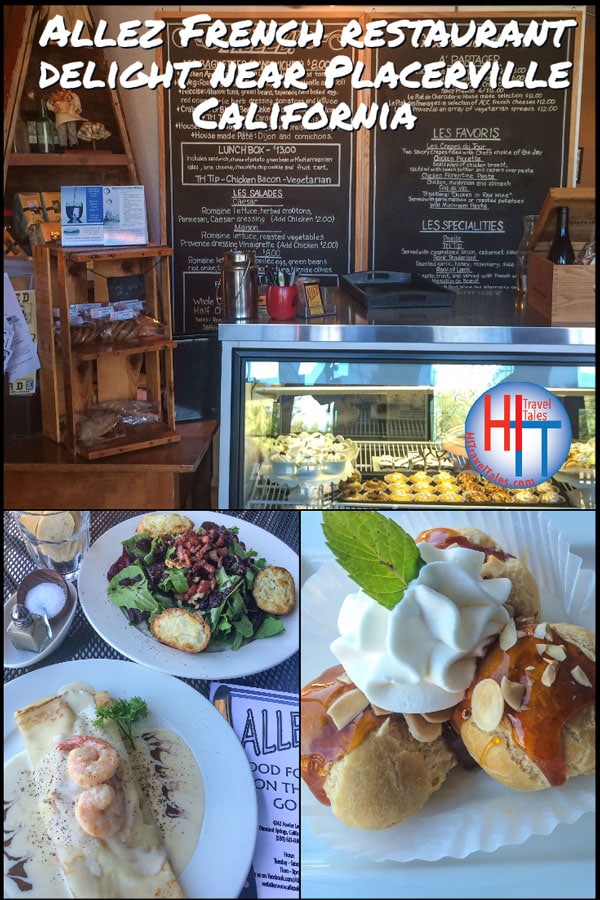 Heads up! This information on Allez French restaurant was accurate when we published it on HI Travel Tales, but, as we know, traveling is all about changes (and inflation, sadly). It is your sole responsibility to confirm prices, transportation schedules, hours of operation, safety and health considerations, and any other important details before your adventure. 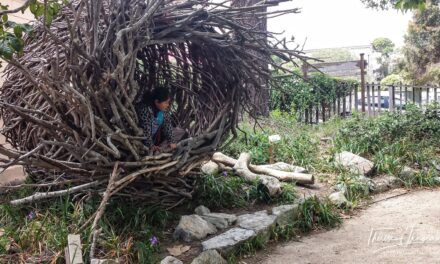 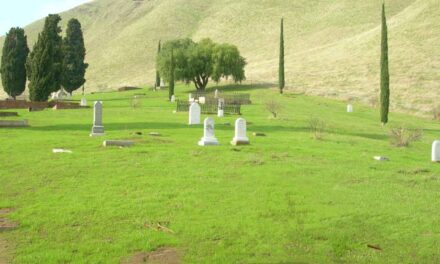 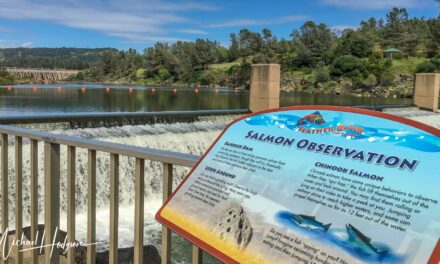 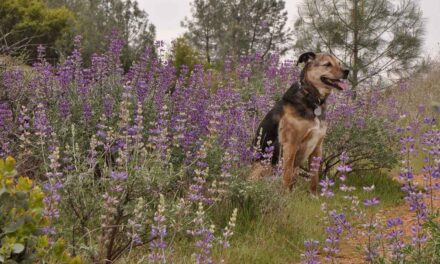