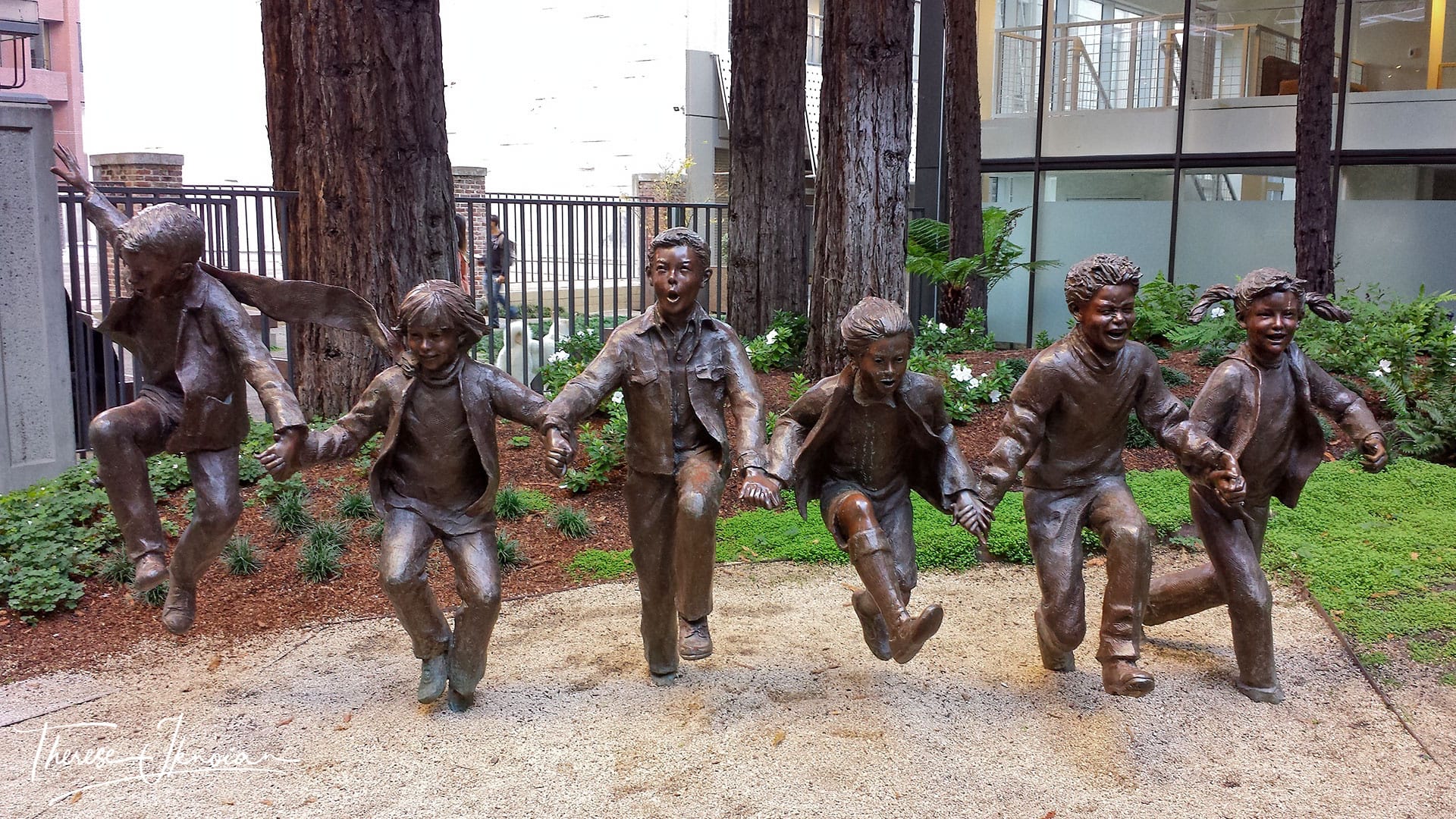 POPOS are privately owned public open spaces that have been required as part of development in San Francisco since the 1985 downtown plan. They make up what are more popularly know as San Francisco Secret Gardens, urban parks and city open spaces — all right there for travelers and locals alike to access in the city.

POPOS may sound like a funny name for something you might munch on during happy hour, but that is so wrong. POPOS stands for “Privately Owned Public Open Spaces,” a.k.a. San Francisco Secret Gardens — urban secret parks in the city for travelers and locals alike.

Whether you as a traveler call them POPOS, secret gardens, secret parks, open spaces, or rooftop parks, they are ideal respites and secluded open areas — perfect for travelers wandering and touring a city who just need to rest weary feet or simply take in the surroundings and do a little people-watching – for free, often in a really pleasant venue, sometimes with public art and fountains, too.

POPOS is in fact the legal and official name of this collection of often pocket-sized parks, atriums, terraces and plazas scattered about the urban core of San Francisco. And they are required of private spaces and buildings by public planning codes since 2012 when the city published an actual guide. Current planning requirements aside, these San Francisco secret gardens have been idyllic getaways of one level or another since the 1980s.

So where do you find these little secret gardens or rooftop parks in San Francisco? All over! Take a look at the city guide to pinpoint POPOS as well as public art. Granted, there are laws about required signage to alert the public to the park but sometimes it doesn’t really exist or is hard to find. And sometimes there may be other hurdles placed in your way of your legal enjoyment of these San Francisco secret parks. But you always have the right to enjoy, so do not hesitate for example walking into what may be a foreboding bank building! 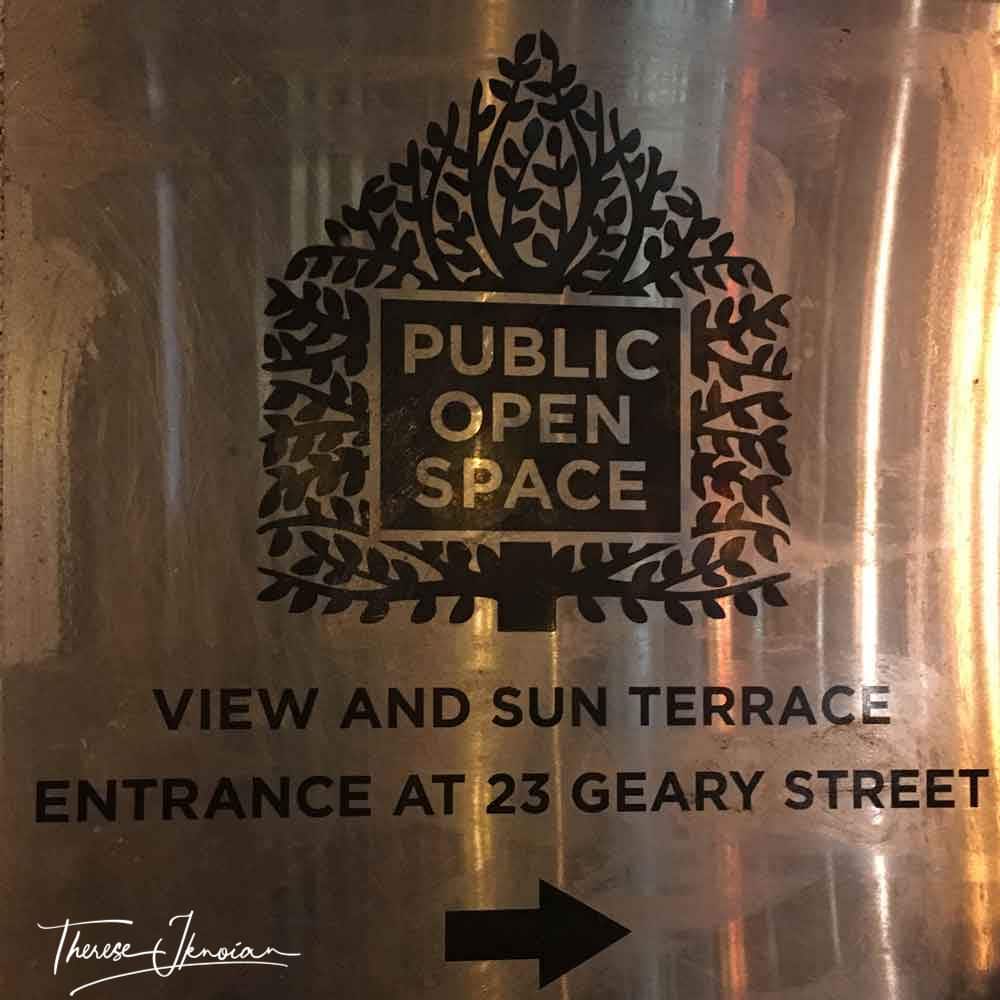 Example of a sign that marks a POPOS, secret garden or secret park in San Francisco.

We visited six of these secret rooftop parks, art venues and privately owned public gardens that are right in the financial district/Union Square/SOMA core of downtown San Francisco (two of them aren’t even on the city’s list!). Use this information below as your quick-start guide, then just keep your eyes open for signs like the above. and Never be shy about making your way into a building to enjoy these POPOS, i.e. secret garden gems, à la San Francisco.

HITT TIP: This interactive map allows you to see the locations of gardens, including public art, on a broader scale, including outside of the city core. 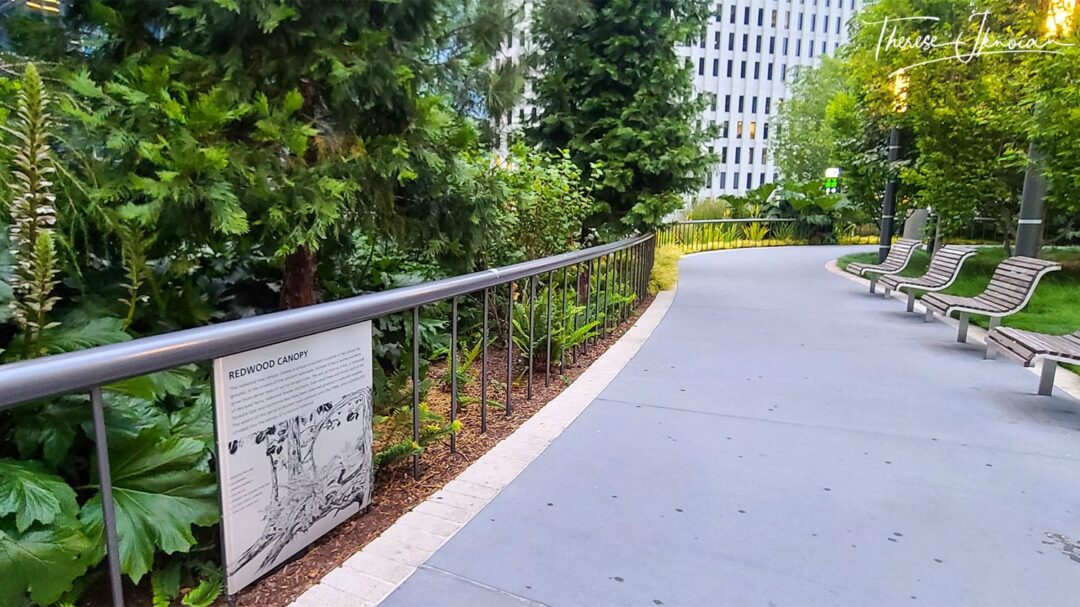 425 Mission St. (with access anywhere there is a door, from Beale and Fremont to 1st and 2nd streets, between Mission and Howard streets, just south of Market Street)

A dandy little surprise on the roof of the highly trafficked downtown transit terminal, the 5+ acre rooftop park at Sales Force Transit center is – in one over-used word – amazing. Located 70 feet above the main transit hall, the park runs along the entire four-block roof of the transit center and feels like an oasis in the middle of a bustling urban center. There is a walking loop around the perimeter, tons of benches for casual meetups, work tête-à-têtes, or a meal. Take a moment to be entertained by the “Bus Fountain,” with 247 jets of water that shoot up whenever buses are coming or going. An amphitheater entertains for special events, classes and special interest groups meet on the lawns, and a children’s play area seems to attract locals with their kids living in the city core. Like gardens? There are 13 different garden ecosystems with signage to help you understand the difference between plants that grow in Australia or in the Mediterranean. There is even a short gondola to transport you from the sidewalk to the roof (we visited when it was shut down due to COVID). Find details and hours at the Transit Center website. 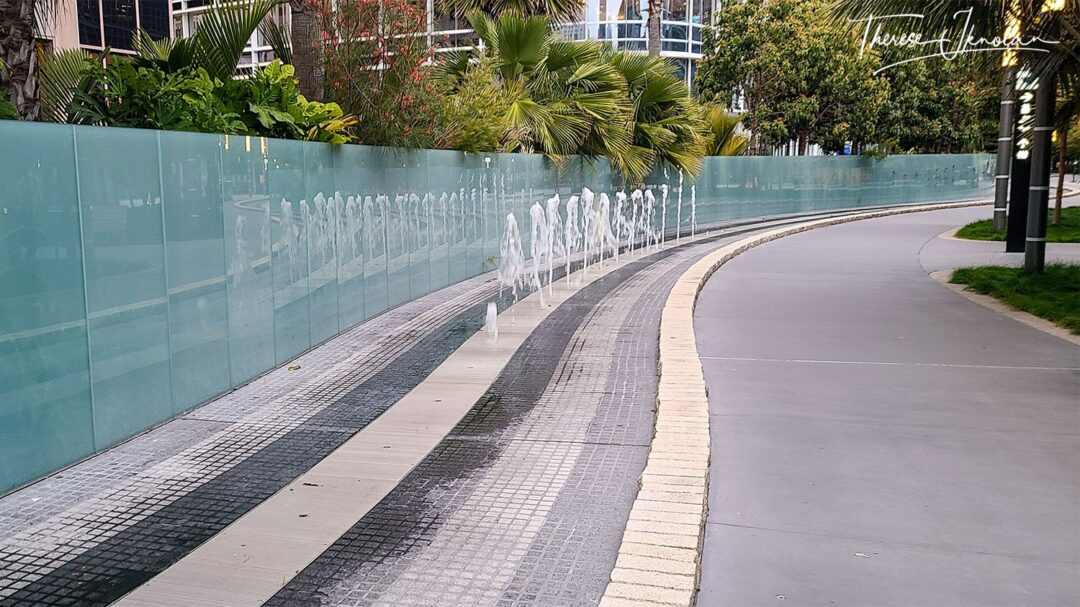 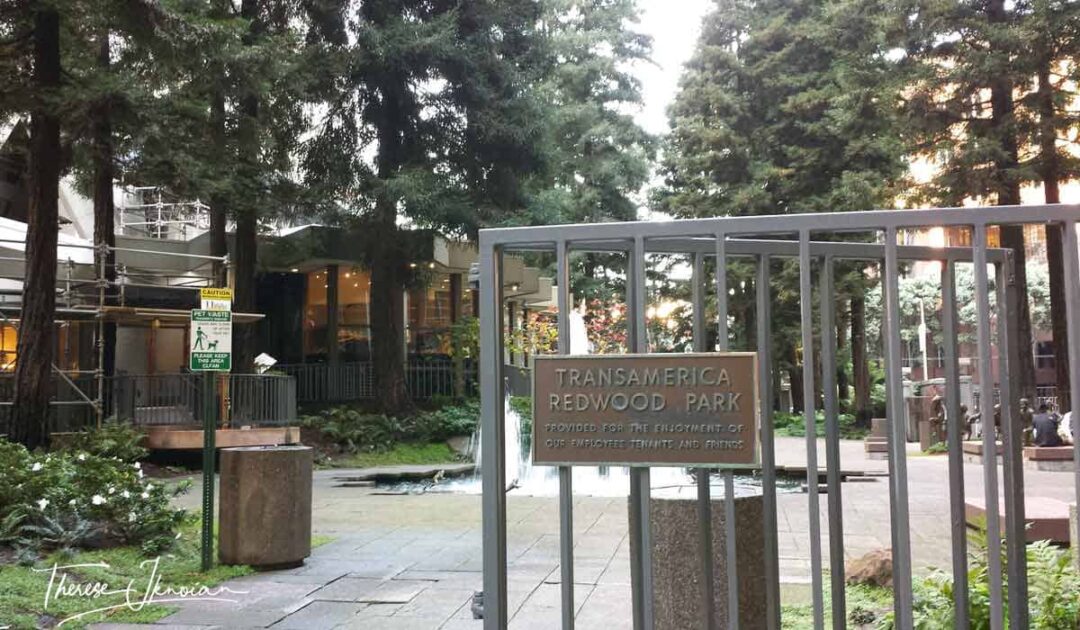 This could be one of the better maintained and most peaceful retreats in the city. And it gets pretty busy at lunch. During the day, you may also find impromptu meetings there between the towering redwood trees, among the ponds, fountains and whimsical sculptures (see the feature image for this story, above). The trees originally came from the Santa Cruz Mountains when the famous high-rise pyramid was built in the ‘60s. Look to it for a dandy escape from urban sensory overload. And you are seriously sequestered in nature here. Take a moment to read the plaque commemorating two stray dogs that were literally adopted by the city as a whole in the 1860s. 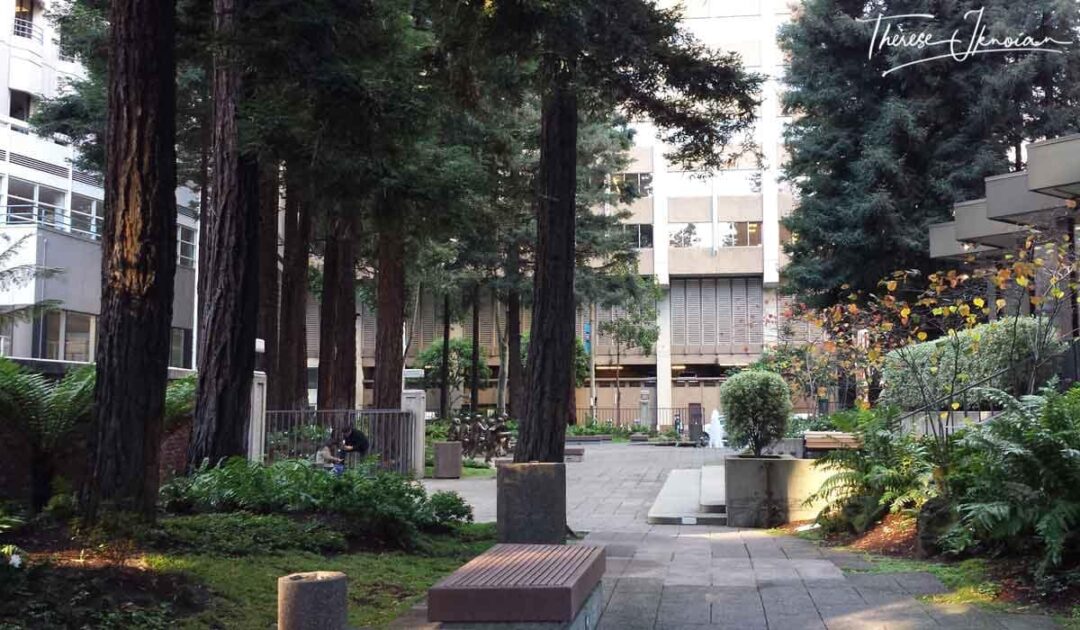 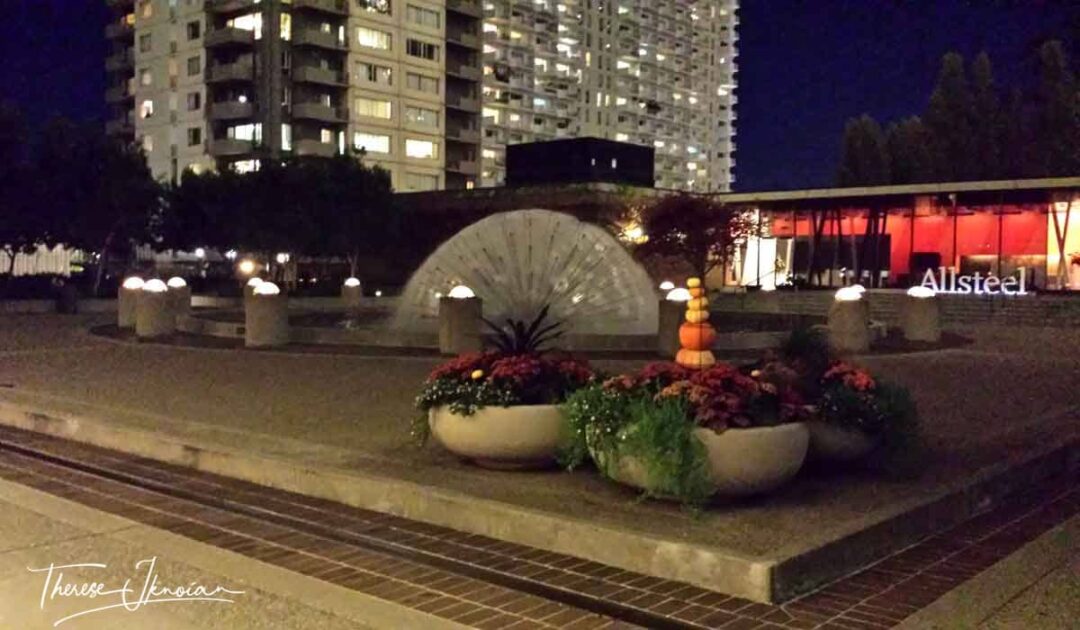 Open: 24 hours but be careful at night when sometimes folks like to find dark corners to sleep (I visited at night and found a building guard patrolling frequently, though, so I didn’t feel unsafe).

Although not listed on the city’s map of parks (only as public art), you can see the green blob on any map and just head there. The landscaped plaza is elevated from the street, and the entrance off Clay had no signs at the time of my visit. You’re just going up these not-so-attractive concrete stairs next to a parking garage (see below). Don’t hesitate. These are public stairs leading to a public open space. Up top, the wide open park offers great benches, a superior pond and fountain, sun (if it’s sunny), and a few pieces of public art to enjoy, too. 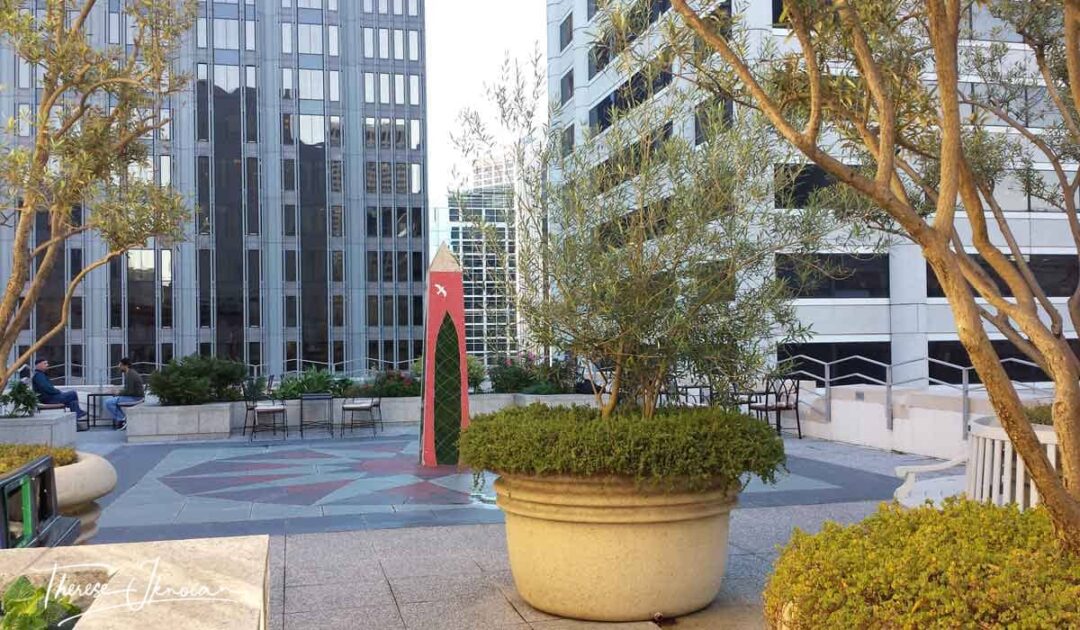 Walking into this one is even more intimidating since it is an office building with a guard next to a bank.  Originally built in 1909, this art deco building has a tall, heavy, golden door and an elegant foyer you traverse to the guard’s station. Just tell him you’re headed to the rooftop garden on the 15th floor and up you go. The secret garden itself is quite nice, open, with flower boxes, tables and chairs with less people-watching but awesome sitting, relaxing and enjoying. The view to the ocean or beyond is blocked mostly by buildings other than a few peek-a-boos, but you can look straight up the side of the Transamerica Pyramid, which is kinda cool. 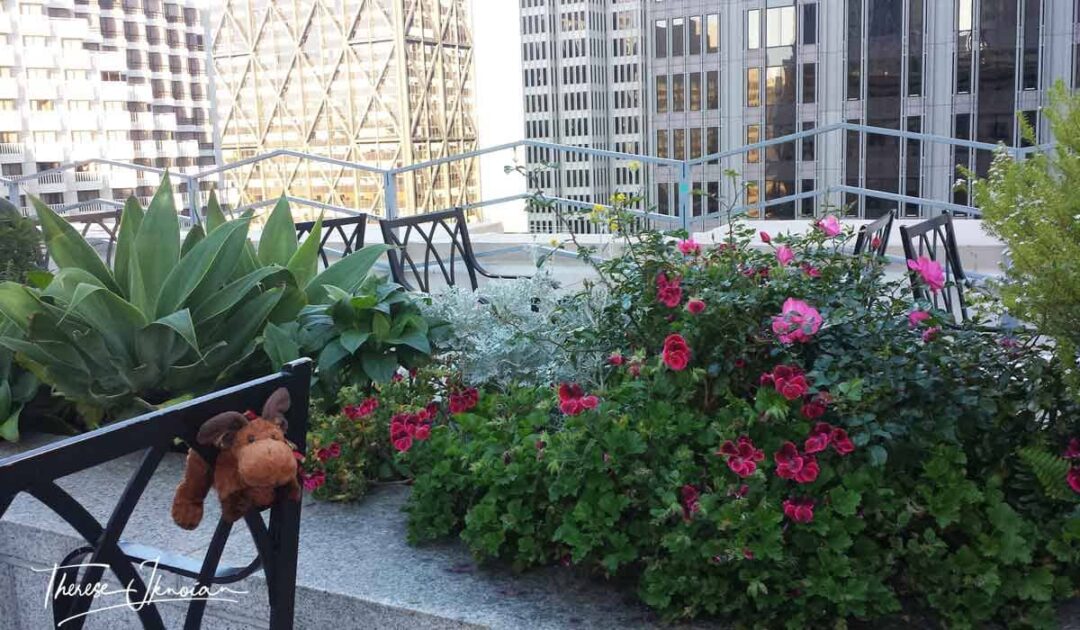 Mookie really made himself at home at 343 Sansome and is an unabashed HUGE fan of any secret gardens and rooftop parks he manages to discover. 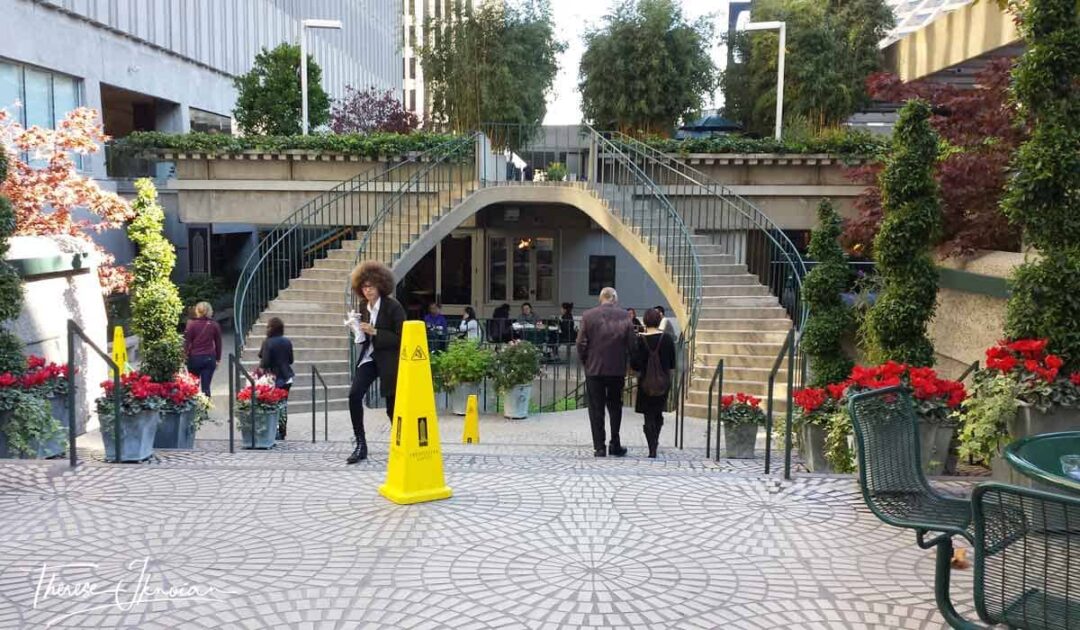 Between Clay and Sacramento streets

Running from the Hyatt Regency and the Embarcadero bayside area are three buildings called, appropriately One, Two and Three Embarcadero Center. You find restaurants, shops and cafes, but the centers are dotted with privately owned public parks and secret gardens. One garden area runs the length of the buildings above street level. With beautifully landscaped nooks and crannies with tables, chairs and benches, you can hang out and watch the activity below you. Or just gaze up at the buildings around you. Or people watch. Inside the centers at ground level are even more parks with artwork and fountains. You can even access a little plaza that is often less busy out the back of the Hyatt Regency that has a gigantic sculpture floating overhead. Go to the Embarcadero website to learn more about the art and sculptures on site and even access a self-guided tour to the art. 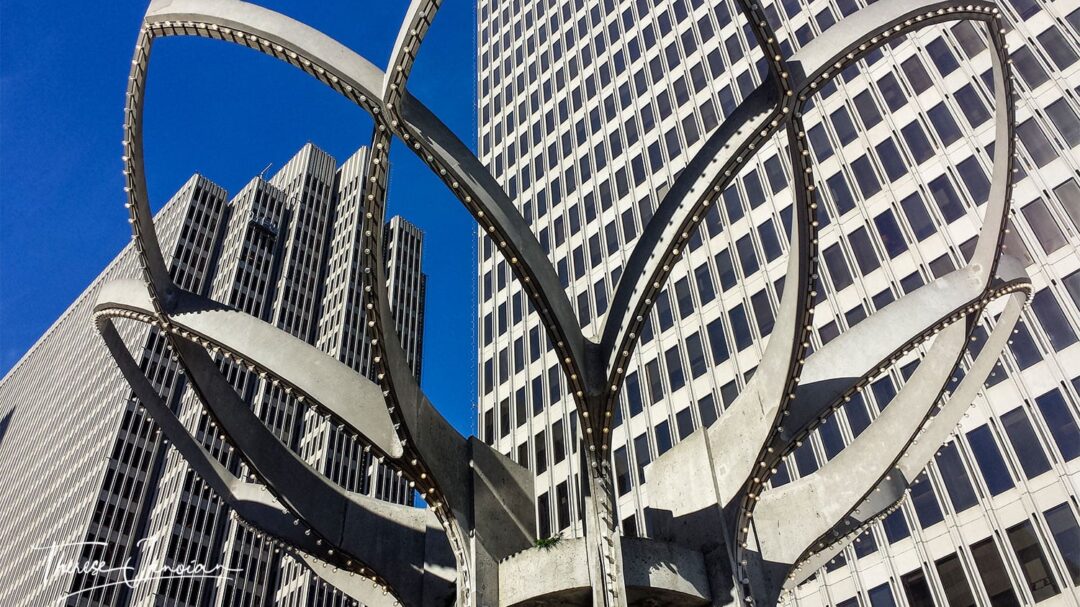 OK, OK, so Yerba Buena Gardens aren’t really so secret. They are in fact pretty dang huge. And OK, OK, so they aren’t really a rooftop park, although indeed a privately owned public space à la POPOS. But they are a wonderful retreat for travelers (or anybody), where you find a massive amount of green space smack in the city. Many convention goers next door at the Moscone Convention Center don’t even realize they can go up some stairs above the center for a green escape from convention and trade show madness. Or for a tour of public art. Only a block down from tumultuous Market Street and a couple of blocks from the Westfield Shopping Mall, Yerba Buena Gardens are close by, and they also offers something that I adore: A fantastic circa-1906 carousel that is part of the Children’s Creativity Museum there. Yes, I ride it every time I get a chance!

HITT Tip: If you are a city ordinances geek, you can read the original 2012 San Francisco Board of Supervisors ruling on POPOS here. And for those history buffs, New York kicked off the concept of Privately Owned Public Spaces (they called them POPS) in 1961.
 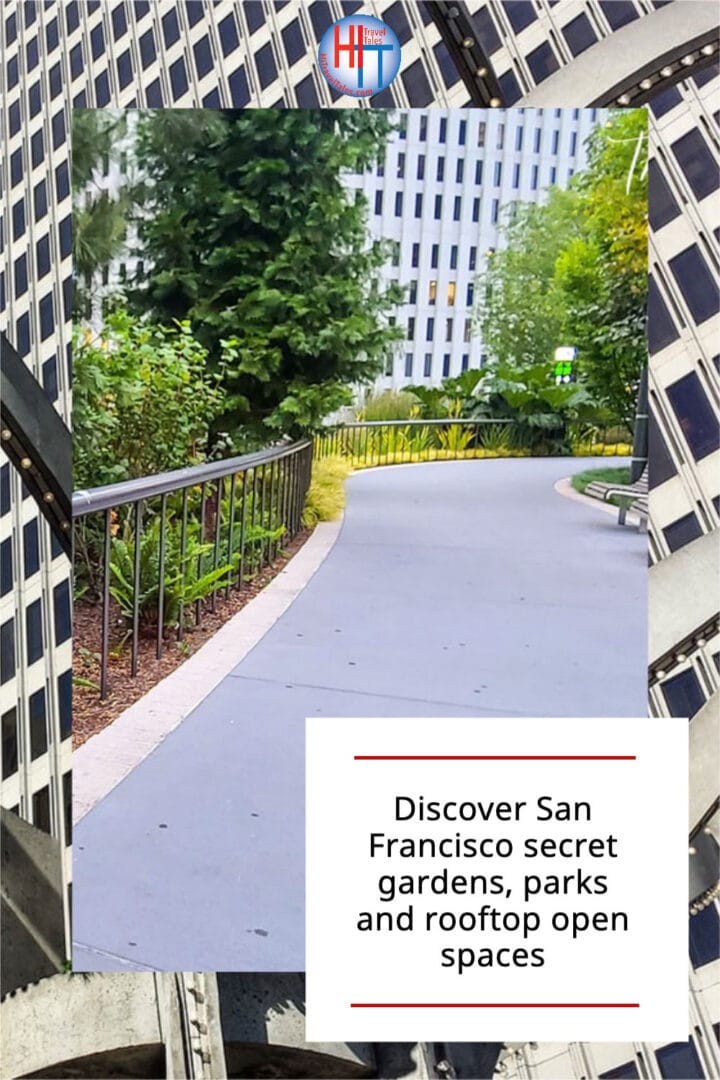 Heads up! This information on Discovering San Francisco secret gardens and public rooftop open spaces was accurate when we published it on HI Travel Tales, but, as we know, traveling is all about changes (and inflation, sadly). It is your sole responsibility to confirm prices, transportation schedules, hours of operation, safety and health considerations, and any other important details before your adventure. 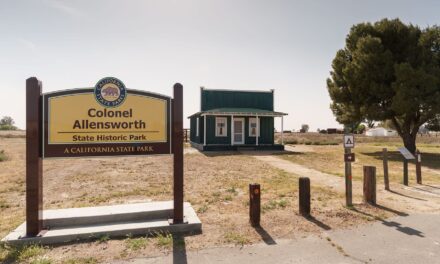 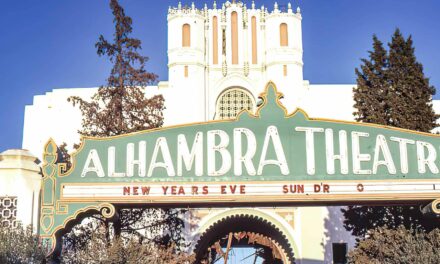 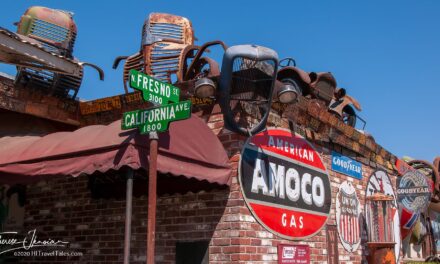 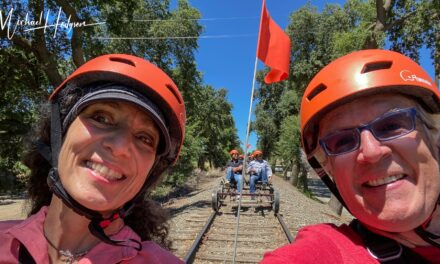