Euroschirm umbrella is light and compact 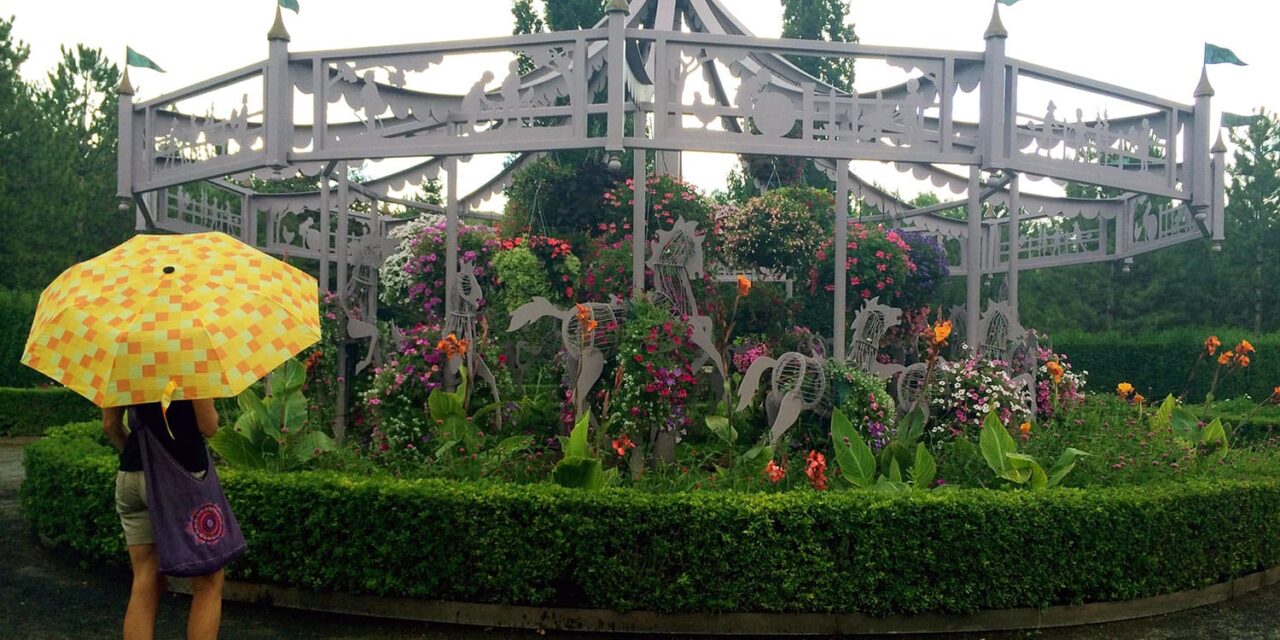 Some people believe you never pack a bag and leave home without bringing along a travel umbrella, ever. He is one of those. She isn’t. He likes the convenience of quick cover. She would rather have a hood on a jacket because umbrellas are (usually) one more bulky item to deal with.

Then we discoveredthe  Euroschirm umbrella. In the United States, we don’t tend to carry umbrellas on hikes or non-urban adventures. But in many countries, it’s a given. That’s why the word “trekking” is part of the German company’s name (for language aficionados, “schirm” means “umbrella” in German). 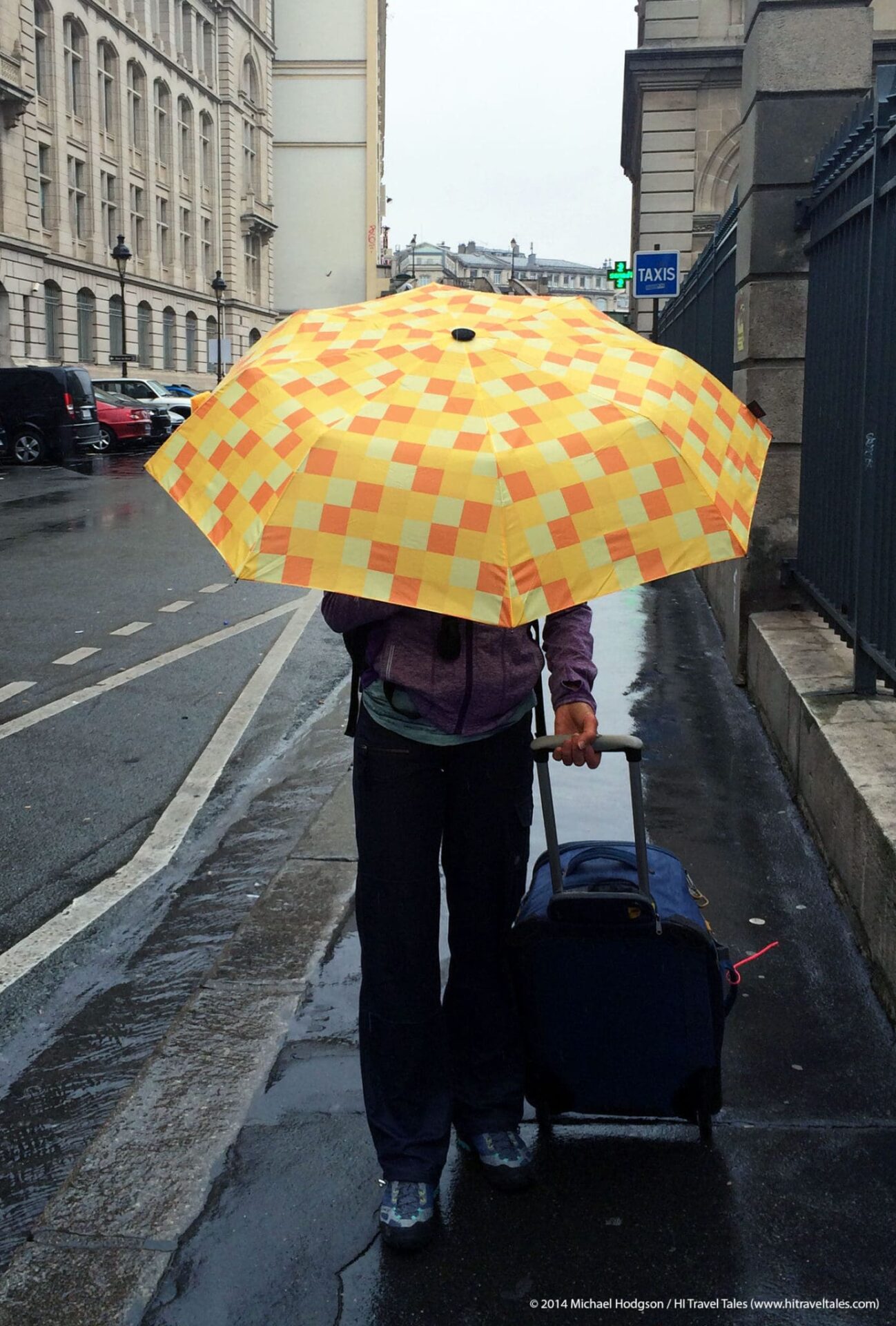 We first met the folks at Euroschirm several years ago when they tossed a full-length umbrella in our hands and we were floored by how light it was. We loved that umbrella but didn’t pack it on trips due to its length. Then along came the foldable ones – and he was sold. Now, she too is ready to pack that umbrella for those just-in-case thunderstorms that can drench you (and your pack or bag) in minutes if you’re only wearing a jacket with hood.

The Light Trek Automatic Euroschirm Umbrella is a bit of a wonder – sturdy enough for winds and rains on hikes or treks means it’s sturdy enough for the same on a city street. Yet it’s only 11 inches long and 10.5 ounces with a span of nearly 45 inches. Enough for two to cozy up under if needed … if he lets her when she opted for a hood that day.

A super lightweight aluminum frame and ribbing supports the fabric, which features a Teflon-treated polyester with double-stitched seams between segments for durability. The style also has an auto-open/close function so there is no struggling as the rain dumps – just one button push to open and another to close. These are high-end and will last you years and years – not like the cheap-o ones you can get for a fraction of the cost that end up in the gutter in a rain storm.

Whether the automatic ($56) or manual (1.5 ounces lighter, $48) version, they come stowed in a nylon sheath with mesh sides to allow for drying. The sheath has a hook-and-loop closure top strap and side carabiner so you can attach it to the side of a pack, a carrying loop, belt or bag. One thing we do miss however is a wrist loop so you can carry it without thinking about it. She would also like a slightly looser attachment of the nylon webbing on the end of the case so it’s easier to yank off the umbrella in a hurry with one finger.

With a wide range of colors – plus a new bright check pattern – we don’t have to argue over colors. Another version ($69) actually has a flashlight in the handle with an emergency signal function, adding 1.5 more ounces to the automatic sans light.

The Euroschirm umbrella is so good it has earned our HITT Seal of Approval which means she’s ready to pack one along too so she won’t have to abscond with his when the clouds open up. 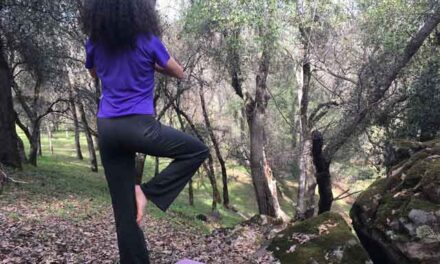 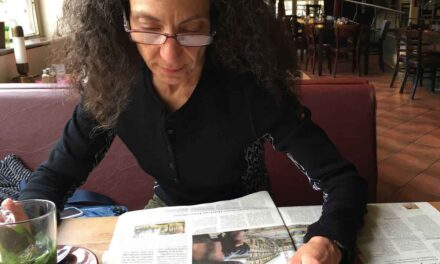 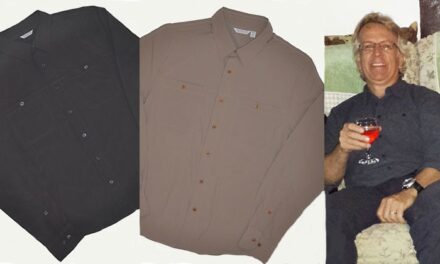 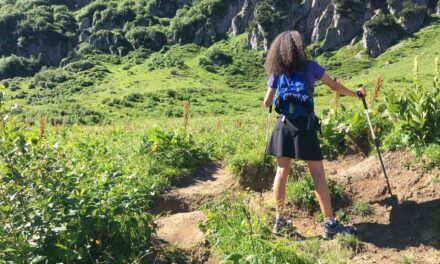