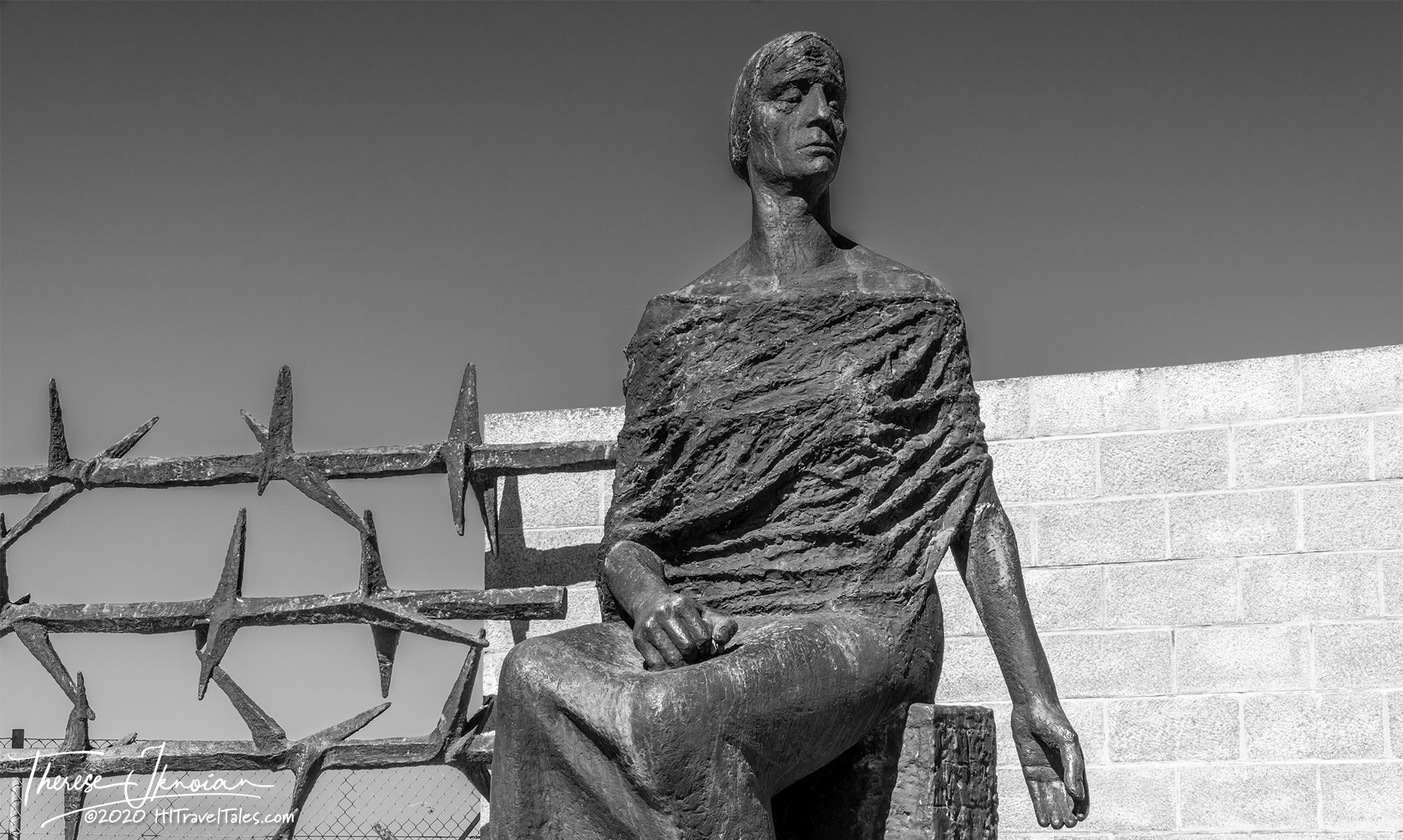 The Mauthausen Memorial in Austria offers a sobering look at Nazi terror during World War II. The former Mauthausen concentration camp, located not far from the Danube River, was one of the most notorious camps. It is estimated that of the 190,000 prisoners held at Mauthausen during the seven years the camp operated, at least 90,000 died. 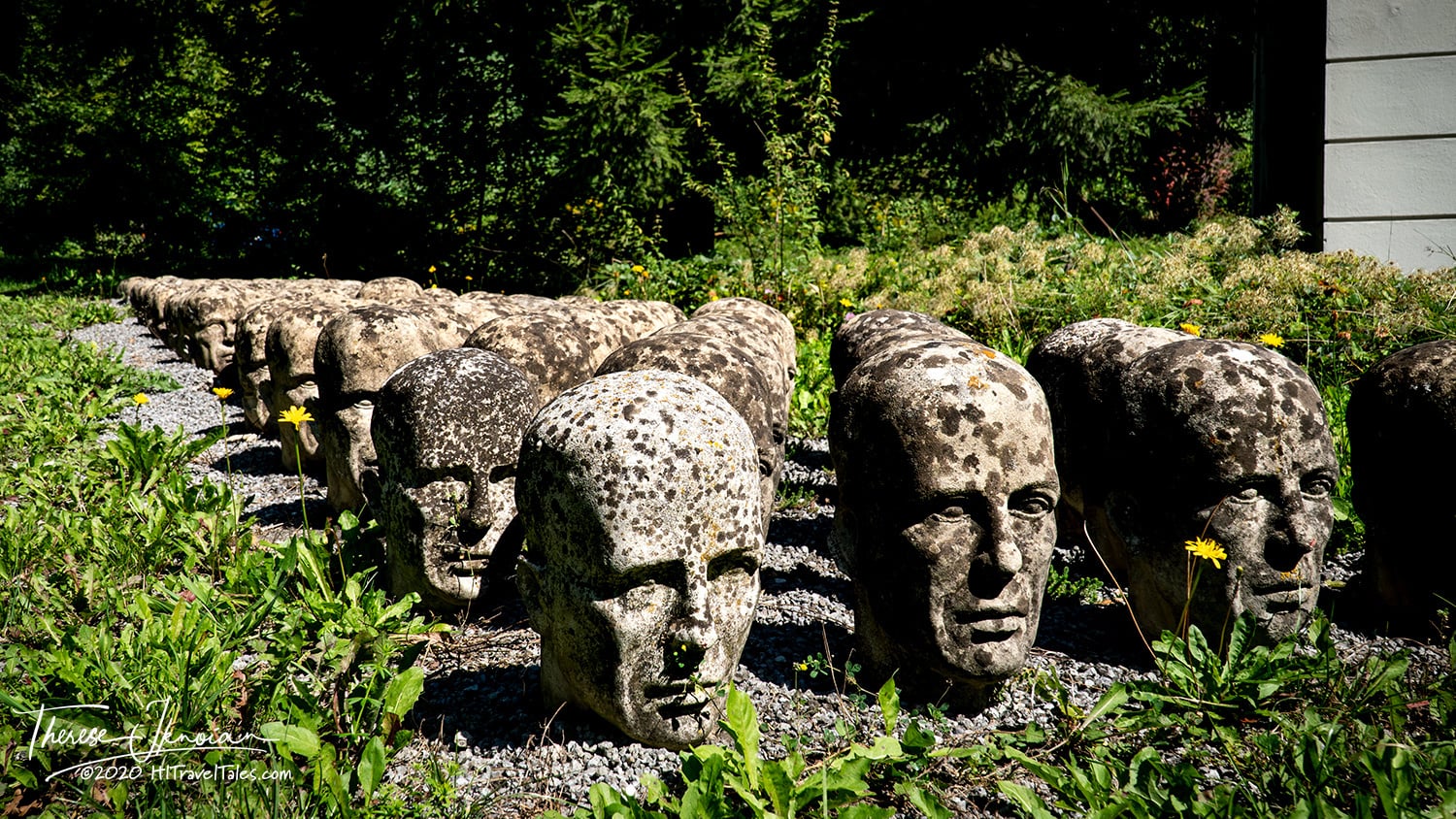 This artwork by Polish artist Eva Kaja near the entrance shows heads slowly disappearing into the ground, demonstrating how individuality and humanity is lost when you lose the right to their own fate.

Mauthausen was built within weeks of the Nazi annexation of Austria in March 1938 in an idyllic setting near the Danube River, about 15 miles southeast of Linz. It wasn’t until the war began, however, that it was transformed into a truly evil place remembered for its violence and harsh treatment of prisoners. The concentration camp housed “undesirables” – men and women — from many countries, including nearly every German-occupied country as well as Allied Forces prisoners. Toward the end of the war, prisoners from other camps also arrived by the train full, adding to Mauthausen concentration camp’s legacy of hunger, death and disease. Many prisoners were in fact transported to Mauthausen and then killed without ever being registered as a camp prisoner. 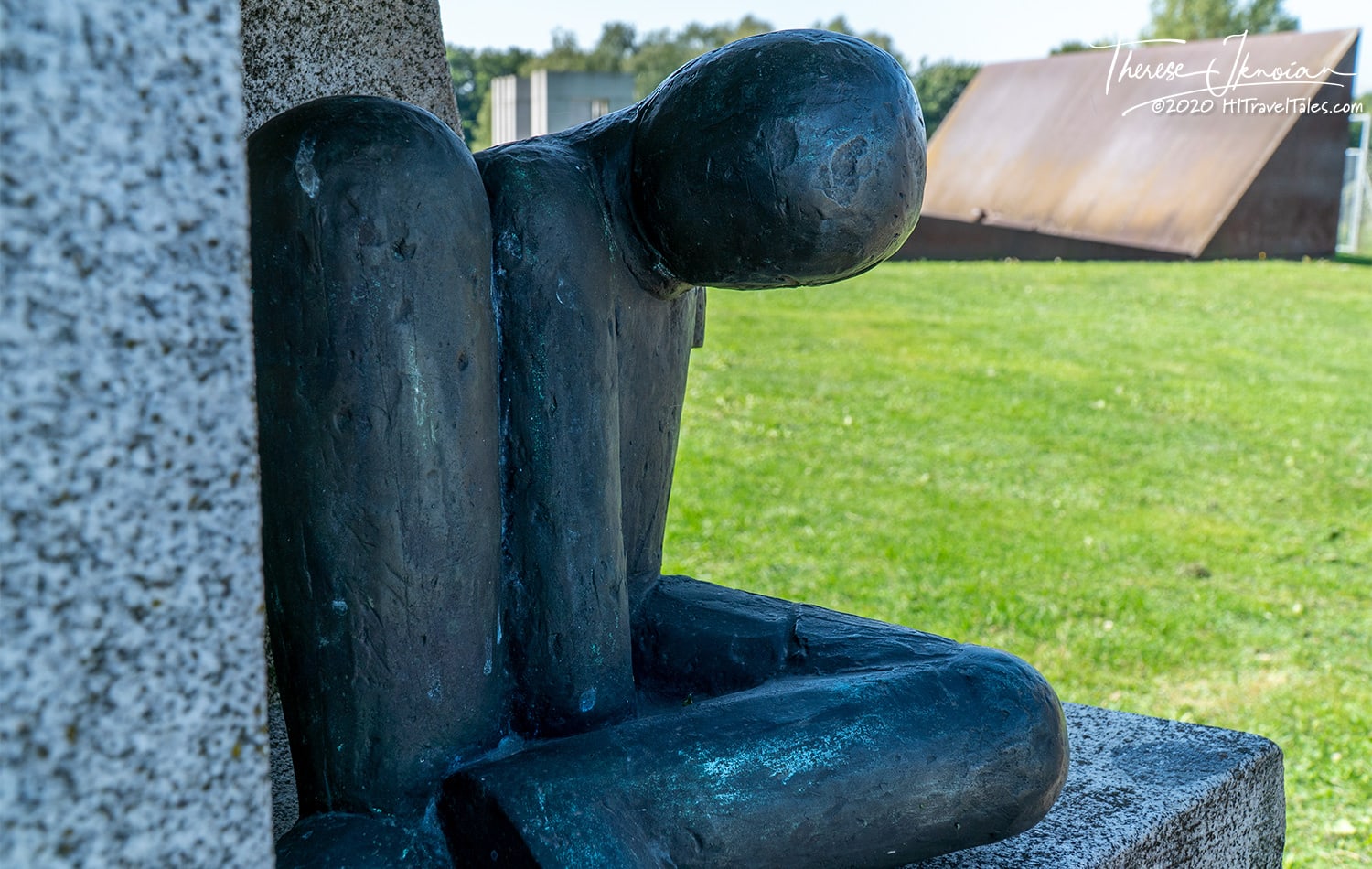 East Germany’s memorial to citizens lost at Mauthausen sits among many other country memorials. The bronze memorial in the background is West Germany’s.

Among the millions who died in the network of Nazi concentration camps across Europe, an estimated 90,000 died in Mauthausen – or nearly half of all its prisoners. That is in fact nearly triple the number that died in Dachau, outside Munich, Germany, which is often the camp travelers go to for a history lesson.

We completed a two-week bike trip along the Danube River a few years ago, starting in Regensburg, Germany, and ending in Budapest, Hungary. On Day 5, a visit to Mauthausen was on the agenda after we had departed Linz. It was actually a long, hot, hard climb up the hill from the Danube to the Mauthausen camp. Prisoners were forced to march right through town and up the hill when they arrived. 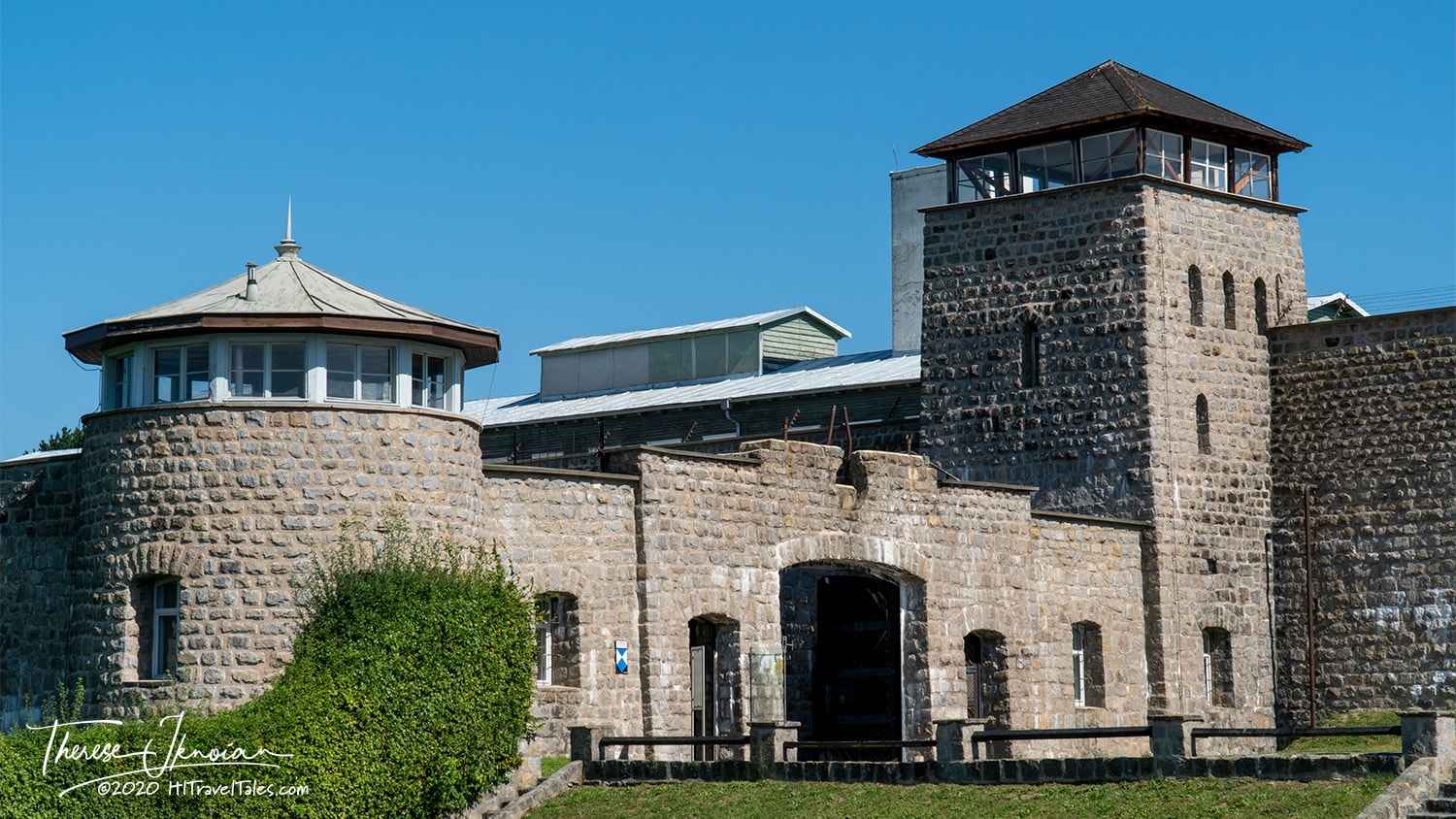 A visit to any of the thousands of former concentration camps open as sites of remembrance is of course a sobering experience. Mauthausen camp however was chilling. It was not our first visit to a concentration camp or site of Nazi terror, having been to Dachau. A bike trip is full of joy at seeing villages and landscape, visiting small towns, and talking to locals as you glide past scenery. If you are going to fully appreciate history, how it repeats itself, and internalize the “never forget” motto, then a visit to Mauthausen concentration camp is still a must. A day trip from Vienna, about 2-2 1/2 hours to the west, is also possible. 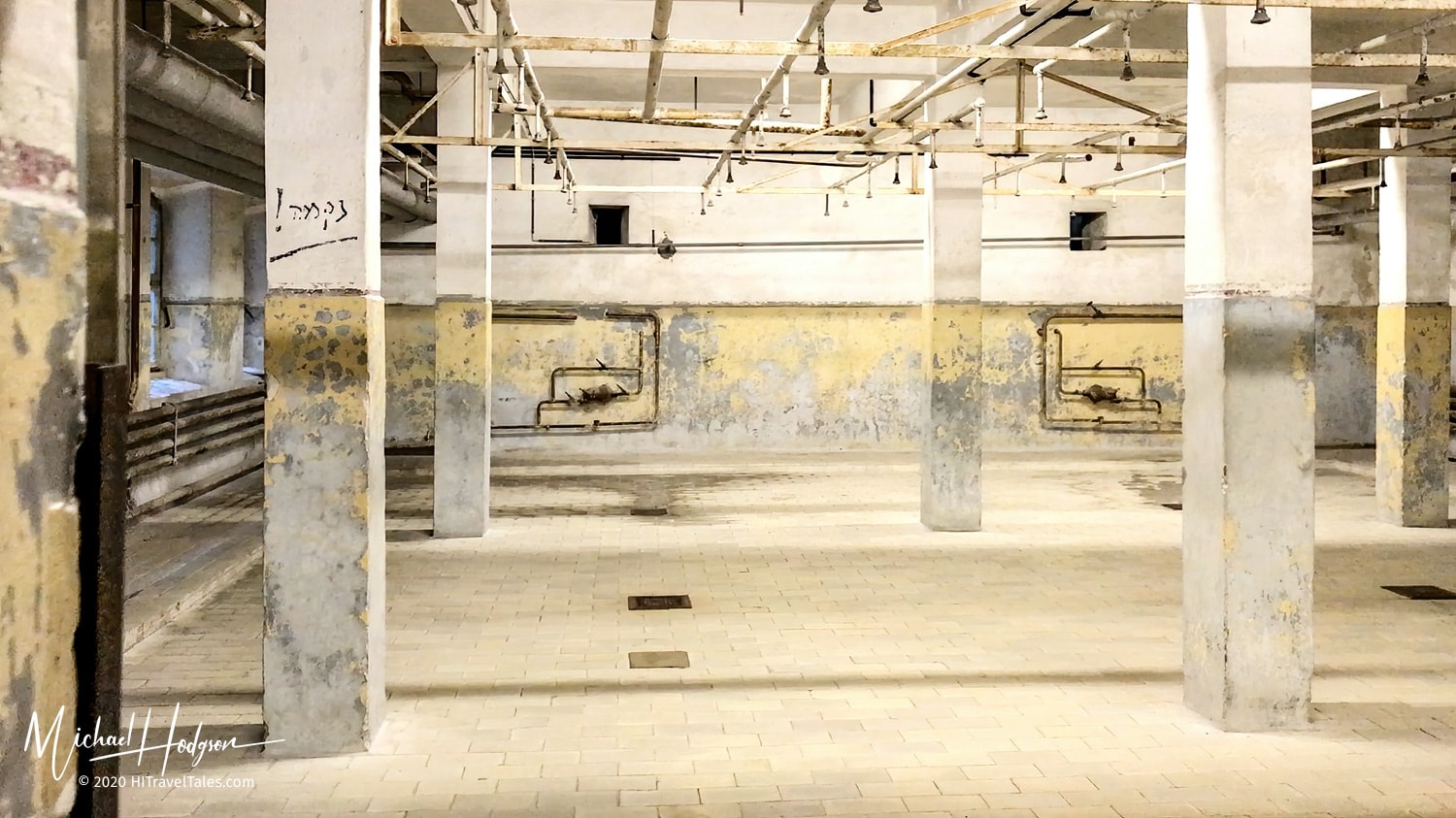 A room in the crematoria and gas chamber area at Mauthausen Memorial.

We spent about two hours there, in part because you move so slowly and have to stop and think about the people and the torture as you walk through former barracks, visit rooms of memorials, and take a look at the grounds and cemetery. (See an overhead map to take a virtual tour here). We found ourselves staring down into a quarry and at the Stairs of Death, where prisoners forced to carry stones that weighed more than they did up the stairs. Many collapsed along the way. Those that didn’t make it were often forced to make a choice on the so-called Parachutists Wall of pushing the prisoner in front of them off the cliff or being shot. Many committed suicide rather than face continued terror.

A look down into the quarry from the camp’s main grounds. To the right and heading up the hill are the Stairs of Death.

We heard stories of prisoners who were forced at gunpoint to run into electrified fences, left to scream in pain until they died. The bodies remained hanging on the fence for other prisoners to see. Guards at many camps of course adopted inhumane behavior, but at Mauthausen, horrific treatment and suffering seemed to be something guards really enjoyed. 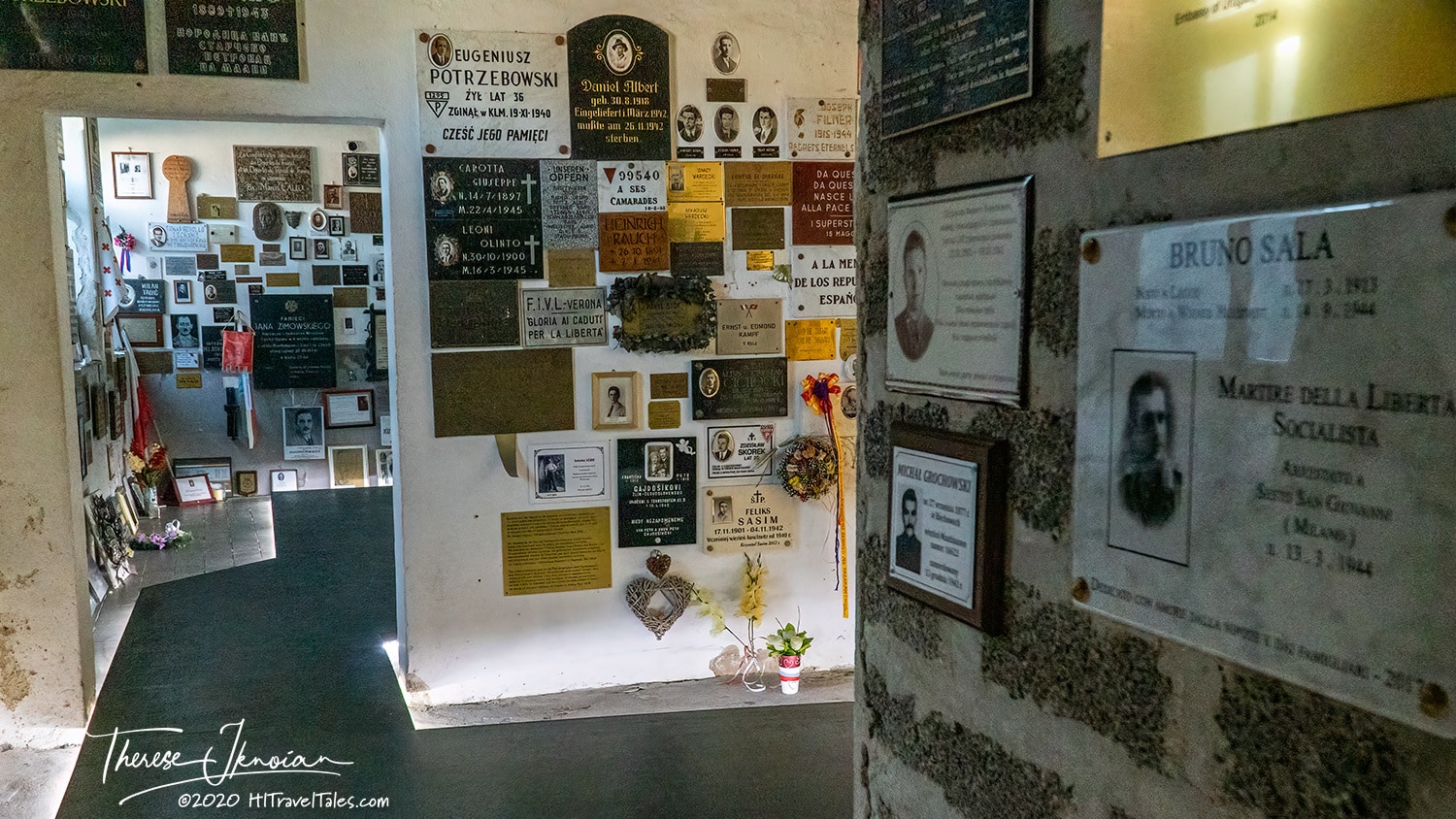 Families of those who died at Mauthausen Memorial concentration camp leave remembrances that crowd the walls and floors of rooms near the crematoria.

Today, there are educational services and tours, with archives and a library maintained in Vienna. As with other Holocaust remembrance sites, there is no charge to visit the Mauthausen Concentration Camp, although additional tours, guides and audio tours carry a small fee. Particularly moving is the Memorial Room of Names, an angular and partly darkened room with the names of more than 81,000 prisoners who died at Mauthausen, its sub-camp, Gusen, or other sub-camps. Over the years, countries have added their own memorials on the grounds to their citizens who lost their lives as prisoners, including Britain, Bulgaria, Yugoslavia and Belgium 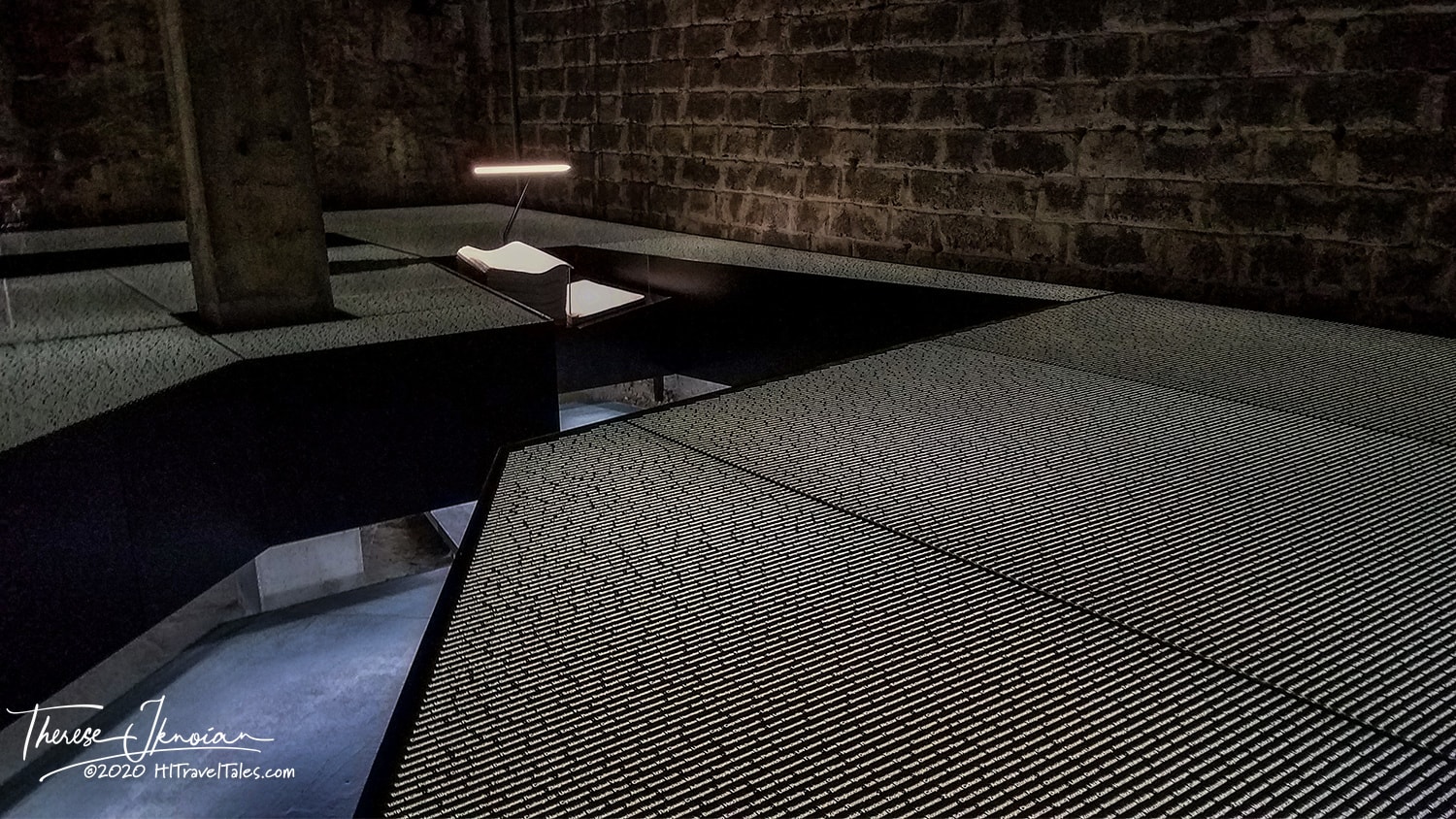 The haunting, semi-dark Room of Names is nothing but a sea of names of all who died at Mauthausen. In the book, you can look up each person.

We left after our tour, continuing our ride in silence for several hours, left to mull how humans can treat each other in this way. Never forget. 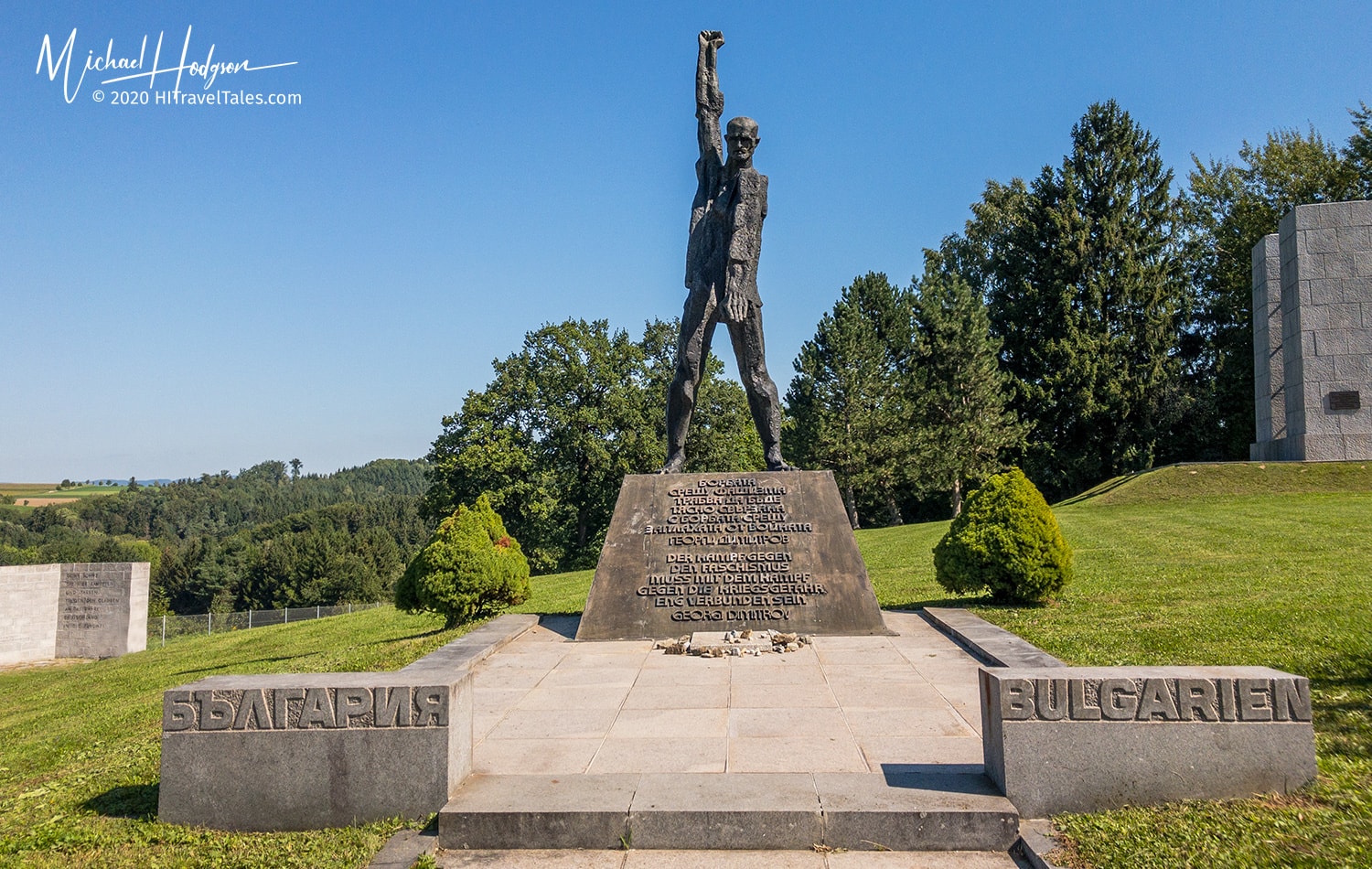 Among many countries that have installed memorials on Mauthausen’s grounds to those lost is Bulgaria.

You may be interested in reading about and visiting other historic sites related to Nazi horrors such as Munich NS Documentation Center teaches terror of Nazi reign and Seelow Heights museum memorializes Battle of Berlin 75th anniversary and also Hohenschönhausen Memorial – Reliving the Stasi prison horrors. 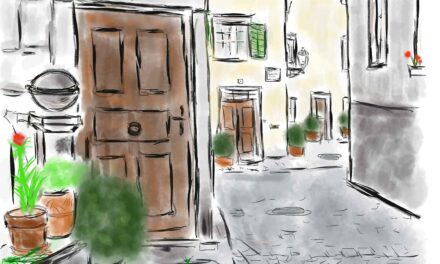 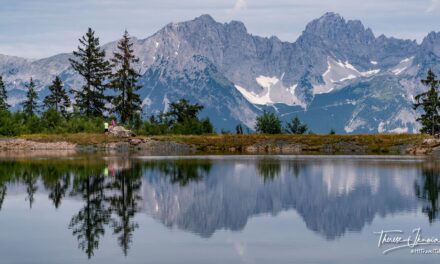 The real Kitzbuhel Austria: Visit Kitzbuhel through the eyes of locals

Danube cycle path – biking the Danube from Regensburg to Vienna 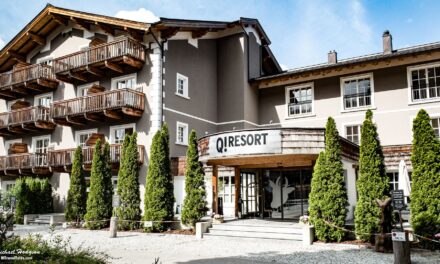 Review of the Q! Resort in Kitzbuhel, Austria