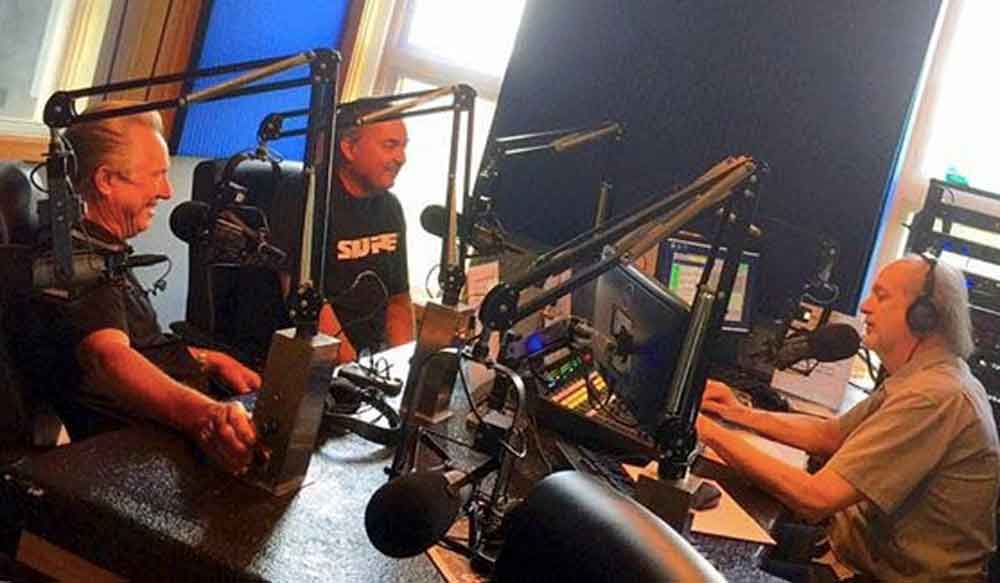 Traveling blues guitarist Charles Baty (“Little Charlie and the Nightcats”) and his fellow musicians with the Golden State-Lone Star Revue concluded their June tour across the Midwest and are looking forward to a break. He and band members Mark Hummel, R.W. Grigsby, Wes Starr and Anson Funderburgh turned clubs and theaters into steamy joints with their blues night after night. But when not playing this seemed to be a food-focused tour! Pizza, Greek food, pizza, steaks, pizza, cognac ice cream….

Hey, Charlie, we know you are singing the blues now that your traveling blues band tour is over and you’re home without any more Saigon Nights ice cream….

June 25, 2016. Part 2 of the South Side Chicago story (Ed. Note: Click here to see Baty’s last journal with Part 1). Buddy Guy’s serves Cajun food and provides us with a refrigerator’s worth of beer – about a case. I noticed a new brand — the Buddy Brew. Replete with the black and white polka dots that have become Buddy’s trademark on his Fender Stratocaster, the label also proclaims the beer as “the Damn Right Beer.” How cool to have your own brand of beer! 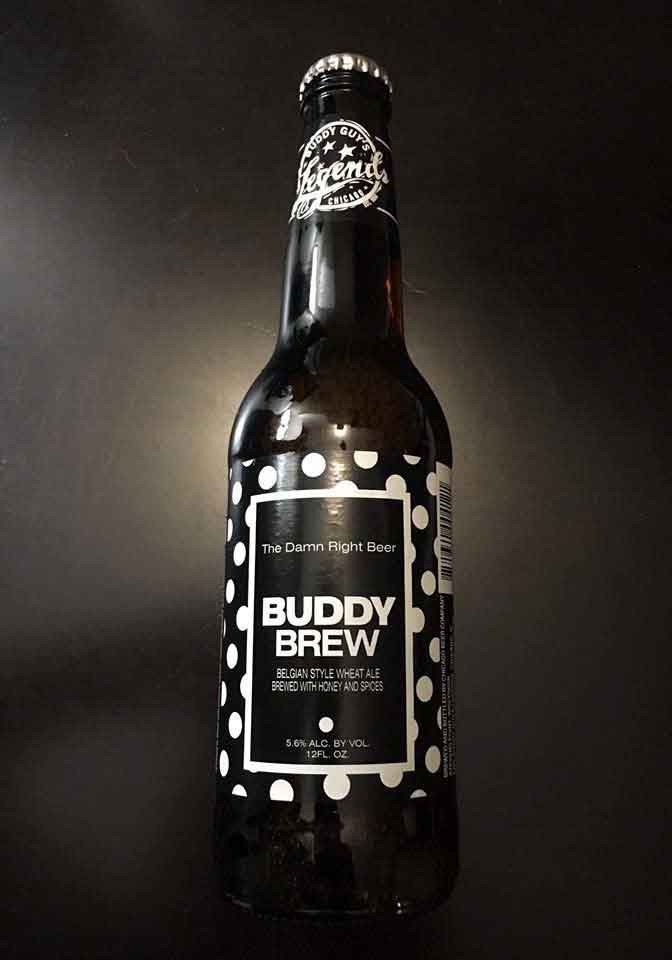 However, when the backstage manager told me that I could drink anything that I wanted, I requested a glass of Buddy Guy’s favorite cognac. Why not?… That was some smooth cognac. It ought to be because it costs about 500 bucks a bottle. This morning four of us headed over to Ricobene’s, four blocks or so from the hotel, and I had a delicious Italian Beef with sweet peppers. That sandwich alone is enough reason to travel to Chicago. They are messy to eat but so satisfying. 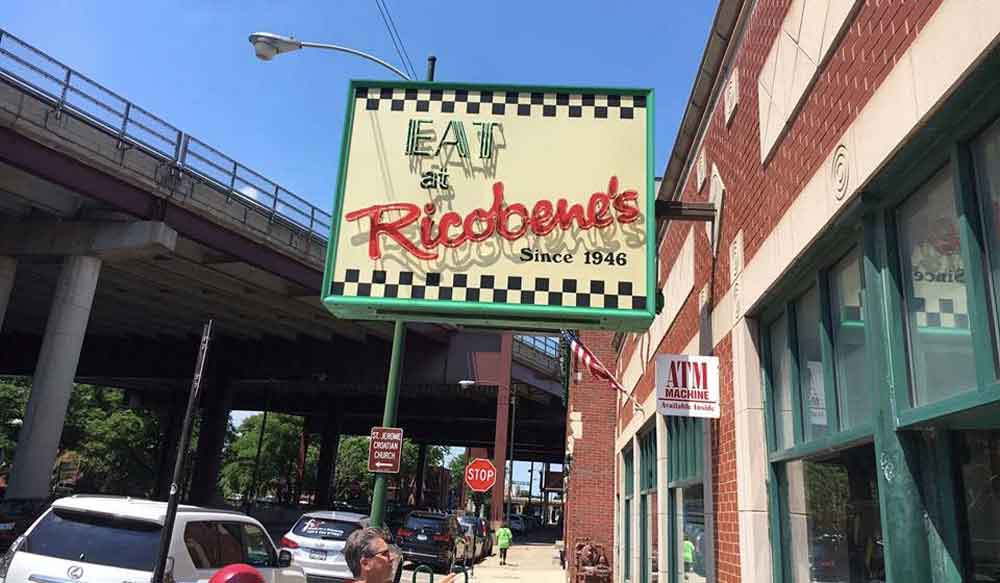 June 26, 2016. Tonight we played a performing arts center in Rockford, Ill., called the Mendelssohn. I guess it used to be a church because all the seating was in the form of pews and they had a large pipe organ in the theater. I met the organist — a lady who asked me what we were doing there. She was casually dressed with a student in tow and looked at me with a blank stare when I asked if she had heard of Jimmy Smith. I don’t think that she stayed for the show. We did a quick sound check, headed to a restaurant called the Olympic Tavern, and dinner was slow. 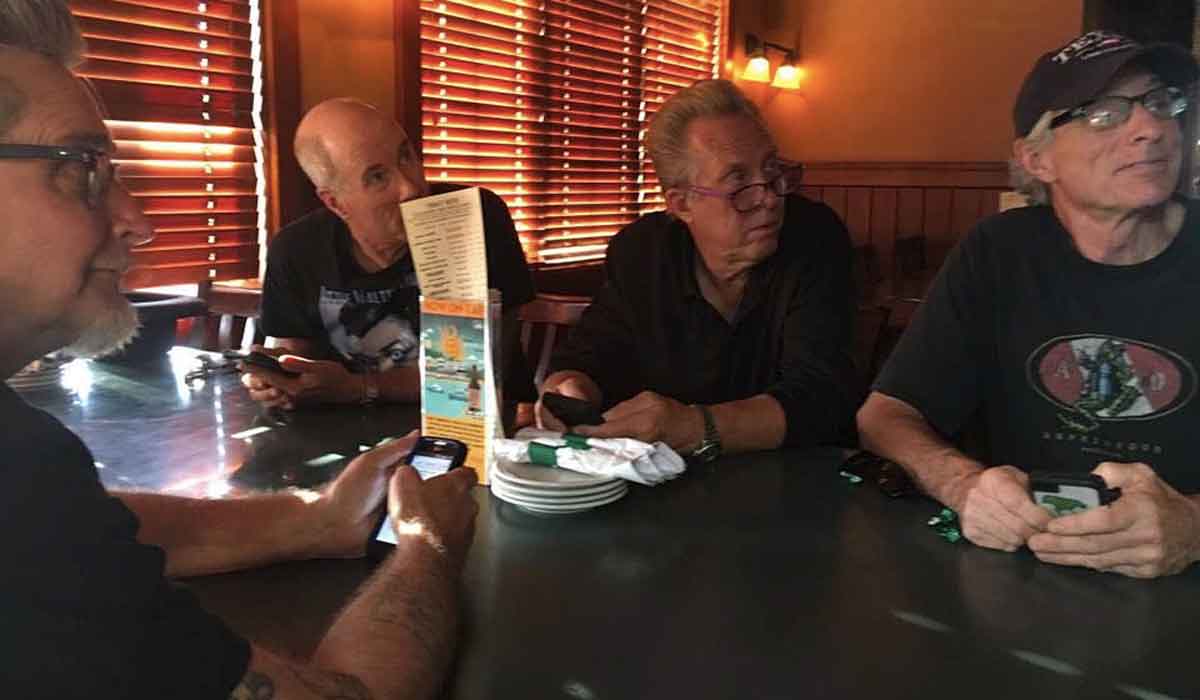 Checking the phones seems like the pre-meal prayer at Olympic Tavern.

In fact, we were supposed to be on stage at 7 p.m. and we were brushing crumbs off our clothes at 7:08. Had to hurriedly drive back, quickly change, jump onto the stage and play a 75-minute set in a decidedly hot and humid church. By the end of the set I was fading fast – actually thought that I might faint. A quart of water and 30 minutes later, I returned to the sweatbox and we banged out Set 2 and earned an encore. On the ride back, I noticed 2 young people driving while drinking out of an open fifth of cognac — classy drunk drivers. We’re back at the motel with no nearby restaurants, just a strip joint. Maybe they could whip up a burger…or maybe I should just wait for breakfast.

June 26, 2016. About a half hour ago, the Golden State-Lone Star Revue finished its gig in Galesburg, Ill., and pulled up to the motel. Wes Starr was wandering around the first floor with a confused look and asked Anson, “What room are we in?” Anson couldn’t remember, so I told them, “307.” (I knew, because they are my neighbors.) This is a common phenomenon among road warriors. When you stay in over 100 hotels and motels per year for some 30-plus years, eventually you have stayed in just about every numbered hotel room. I try to remember by placing my “Do Not Disturb” sign with a certain rakish angle…. We drove from Rockford, south and west to get to Galesburg, using the toll road I-88 for a while. Not much food on the Western stretch of I-88. We stopped at Rock Falls, Ill., and I found a decent Mexican restaurant called El Tapatio. I ordered some variation of a tostado and guacamole called a Tostaguac. We played this afternoon in a small bar called Fat Fish Pub. It was an audience of blues lovers enjoying a Sunday early show with a 5 p.m. start time. Three blocks away, some fair or circus was going on. The smell of cotton candy and mustard-encrusted corn dogs wafted down to our little club. As we were loading out, we could see the carnies loading out with their giant trucks hauling rides, funnel cake stands and the like. Kindred spirits headed in different directions. The lightning bugs were beginning to flash as dusk settled over the corn belt. A few hours of sleep and then we head through Amish country towards the Twin Cities. First, we cross through the Quad Cities — all 5 of them. Must be the new math to have 5 quad cities. We are part trucker, salesman, carnie, entertainer, tourist, itinerant worker and just tired working guys trying to earn a buck…and trying to remember their room number.

June 27, 2016. As this short tour draws towards its conclusion in three days, let me say something once again about motel breakfasts. There is nothing more depressing and disgusting as the bargain motel continental breakfast. Stale bread, Dollhouse muffins, 3-ounce yogurt (if you are lucky), the dreaded motel waffle, and two-year old Cheerios are not my way to start the day. There are exceptions to this fare, but these choices cause me to turn up my nose and look elsewhere. Right next to our inn was one of my favorite grocery stores, the Hy-Vee, shining in the morning sunrise like a golden temple. It beckoned me with its alluring Starbucks sign. When I saw the many breakfast choices, I gladly shelled out 8 bucks for a country skillet full of potatoes, bell peppers, onions and scrambled eggs with rye toast. No weak Denny’s coffee, but the full octane Starbucks bold roast complemented my morning fare. Granted, there isn’t a lot of atmosphere there, but I left feeling awake and ready to drive. 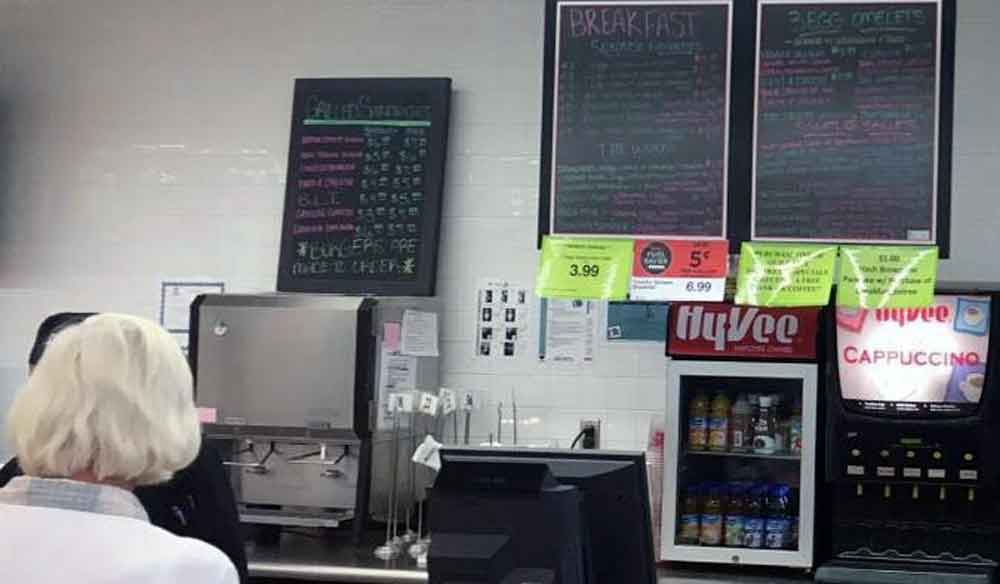 Our blues correspondent loves the breakfasts at Hy-Vee. Really?

June 28, 2016. Some 10 years ago, a friend of mine named Ann Wickstrom organized a polka vacation to the Twin Cities area for me. We went to German restaurants and heard polka music, she arranged for me to take accordion lessons from two top-notch accordionists, I visited polka music stores, jammed with a church group that wrote religious lyrics to famous polka melodies, and she even arranged for polka disc jockeys to give shout outs to me over the air. Today, on my off day, she gave me a tour of Minnehaha Falls, we hiked along the creek trail and saw lots of interesting wildlife, and then took me uptown for dinner to a great restaurant called WSK for “World Street Kitchen.” They had a great collection of food that you might be able to find on streets and food carts around the world. I ordered a “Yum Yum” bowl with Korean short ribs and kimchee served over rice and a poached egg and topped off with peanuts and hot sauce. It was spicy, filling, and unusual. 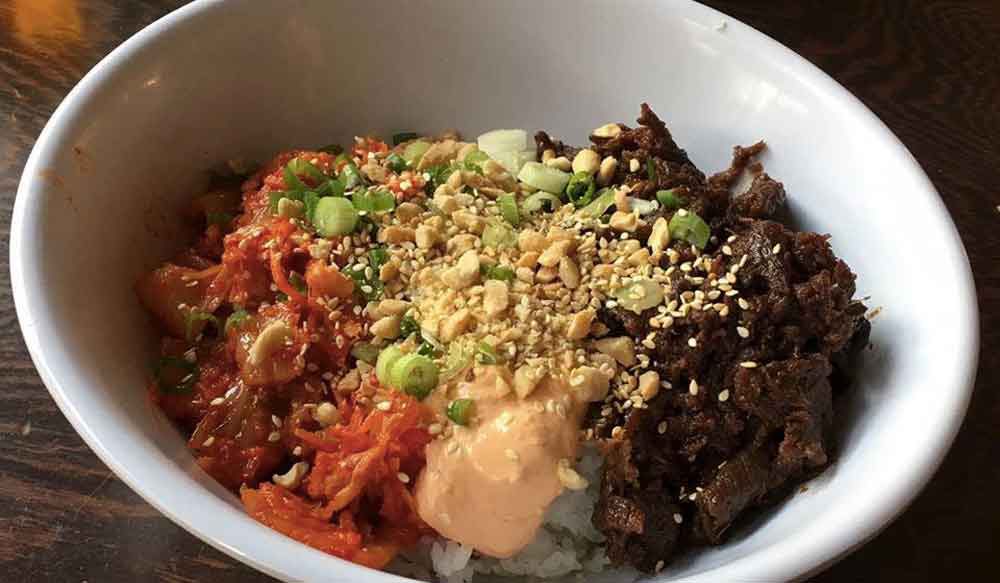 Right next door was an ice cream shop with a long line out the door. The same people who run WSK evidently own it too. It is called Milkjam Creamery. They serve adult-flavored ice cream. I sampled a couple, but settled on Saigon Nights: Vietnamese coffee ice cream with some Hennessy Cognac added to the process. 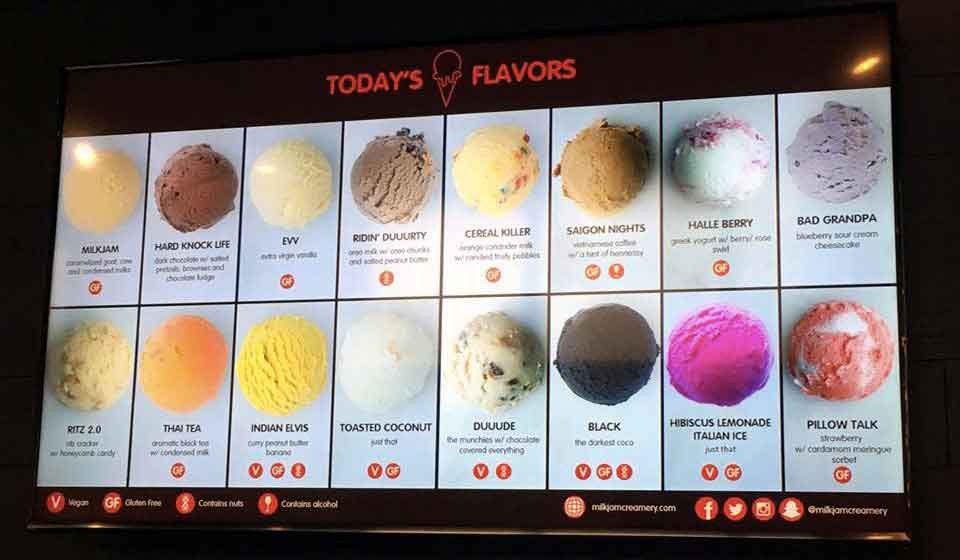 Minnesota is a beautiful state with some great people and picturesque countryside. But I have only seen about three lakes and there are supposed to be 10,000. Where are the other 9,997? Did somebody misplace them or even steal them? Or are they the victim of global warming? I will search some more tomorrow.

June 29, 2016. Today the Pup and I headed down to radio station KFAI in Minneapolis to promote tonight’s show. Usually we don’t have time to head over to a radio station and be interviewed and spin records because we’re driving. But today we dropped by on Jackson Buck on his show Freewheelin’ and we told some tall tales.

Anson and Charlie yuck it up on the Freewheelin’ talk show at KFAI with Jackson Buck.

After the spot, a radio station employee named Betty offered me a choice of homemade cupcakes. We said our good byes and headed towards the car and noticed a funky looking bar, the kind of bar that you would expect to see Steve Buscemi get kicked out of and thrown into the gutter. It was called the Viking Bar, an old bar dating back almost a 100 with beautiful art deco panels on the wall behind the bar. We headed over to the Parkway Theater, a beautiful old theater with immense, bright murals on the walls including one that looked like Josephine Baker. It was adjacent to an old Tex Mex restaurant named Pepito’s and the food was great but heavy. I had the chicken mole and it was cooked perfectly. We put on a great show, but the crowd was a little light since we were competing with a blues society show with Doug Deming, but the energy was palpable, and I sincerely hope that both shows succeeded. It felt great to be performing in the Twin Cities again. The crowd was enthusiastic and the sound was impeccable.

Tomorrow is Omaha – should be a blast (thanks Omaha Blues Society) – then the tour is over and we all head home again. 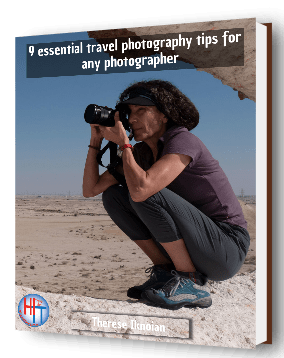 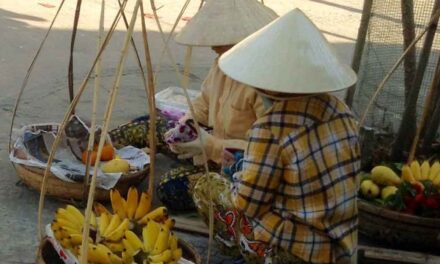 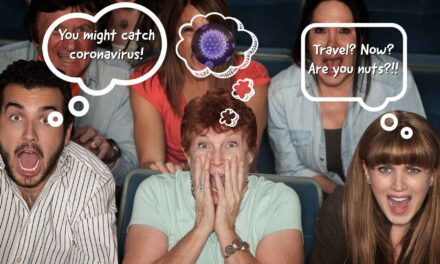 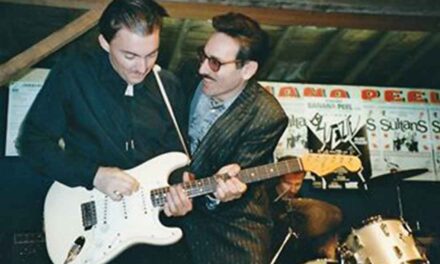