Photography tips for improving your travel and street scene images 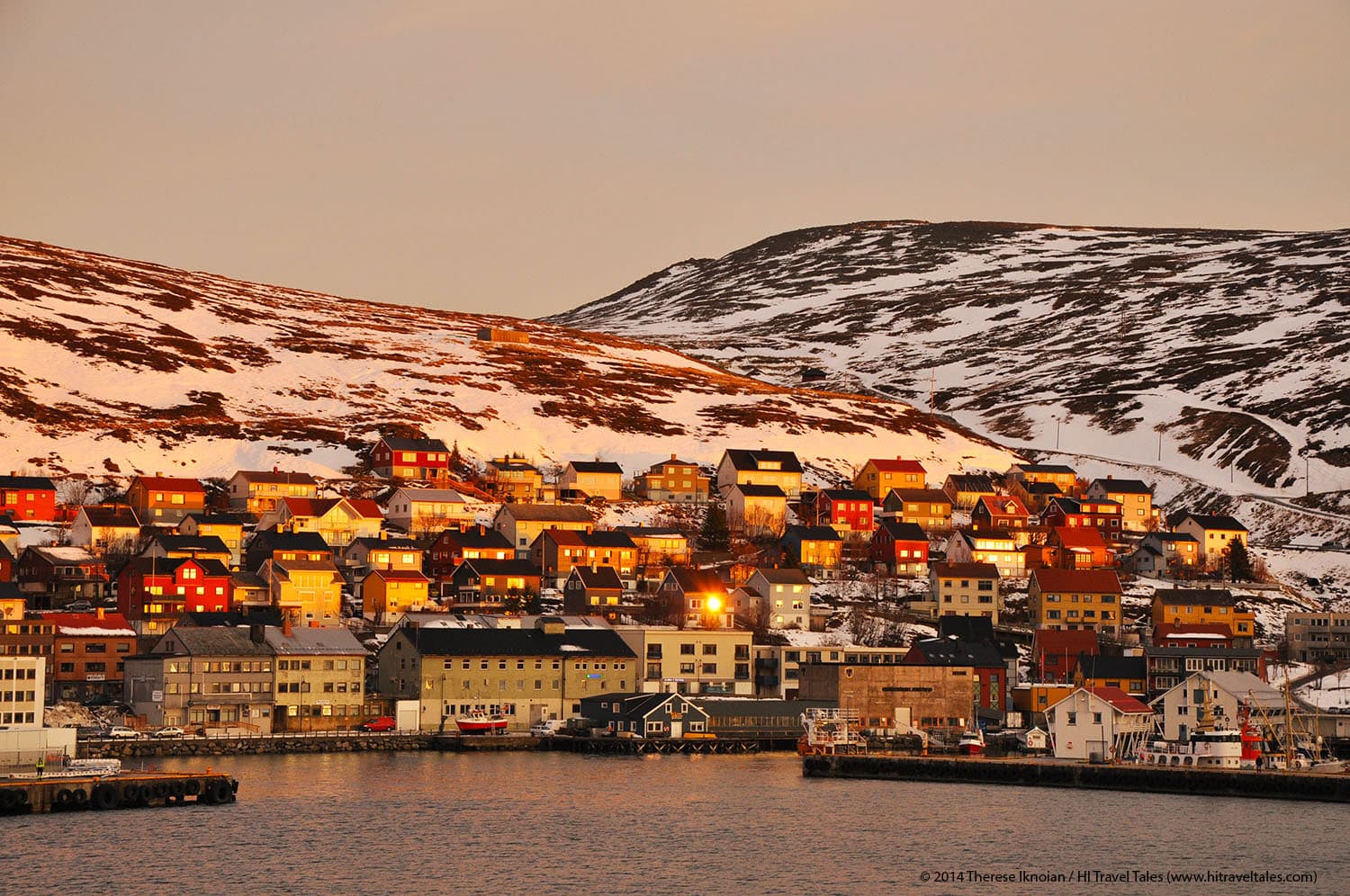 I like waiting. Sometimes you see a scene and think, “oh wow!” and just snap. Sometimes it makes for a better photo if you see the scene (go ahead and snap if you want for fun) and then wait. Wait for a pedestrian to be in the right place in front of a church, wait for a bird to fly in front of the trees, wait for the lady selling apples to turn her head just right, or maybe wait for the wind to push ripples across a pond. Waiting has its rewards in often improved composition and character.

The sensory overload of street scenes in China leaves you mostly overwhelmed. With a temple gate in the background in Kunming, China, in April 2016, I waited for cyclists to roar past, working to pan with them to put the background in blur. 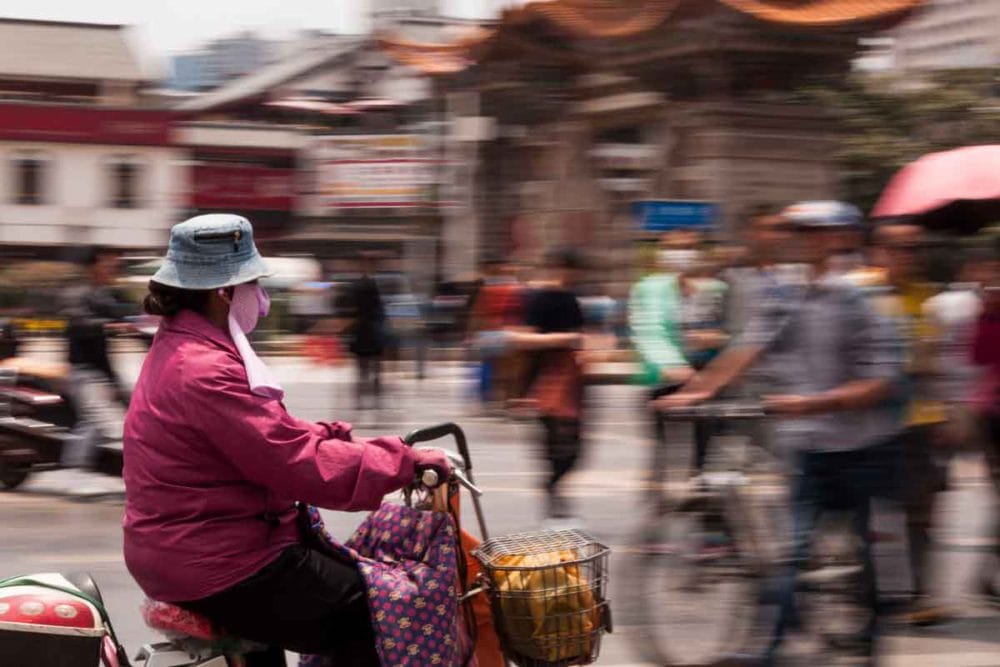 Although a part of waiting – thus my word “anticip-wait” — this means not just passively hanging out waiting for the man in the sun to flip the newspaper page but watching his eyes to get a feeling for that next flip. Or being on a street with a backdrop you want and looking around for just the right passer-by to accentuate the scene and anticipating that person’s arrival. This means being an active part of the composition and components and not just letting them happen to you.

Attending a children’s Carnival parade in Altstatten, Switzerland, in February 2015 (known as “Fasnacht” there) all the little ones were tossing confetti. So I got down to their level and waited, anticipating a toss in my face i.e. lens. Several tosses targeted me wonderfully (manual focus demanded here!), but this little girl covered me with blue and white flecks while she stared right in the camera. 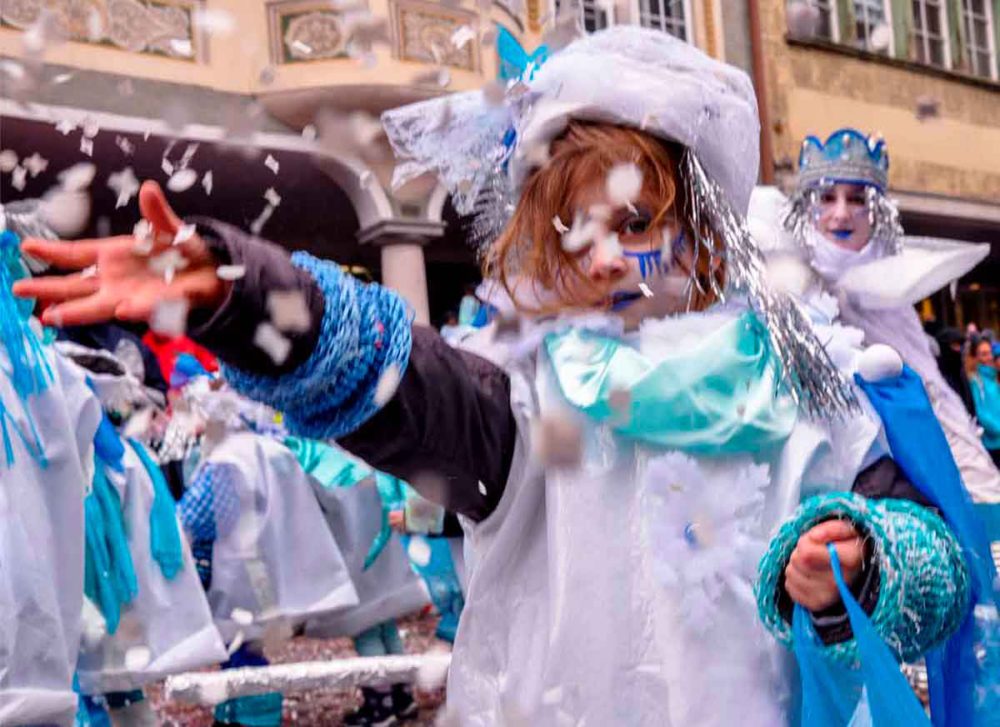 Get up, down, all around

Ever watch most people taking photos? They stop and snap, usually standing with camera at eye level. The world is not always best seen at your personal eye level. For example, you can make a child seem bigger by getting lower, squat in a flower field to feel a part of the scene, find a better perspective with the shadows by climbing on a wall or bench. Even consider lying on the ground (This is one of the more important photography tips and requires practice). I in fact very rarely take a photo at my eye level unless it’s more of what I call a snapshot.

The Sunset Celebration in Key West, Florida, is a nightly all-comers party on the ocean, with vendors selling drinks and trinkets. Visitors and residents alike show up early and pack the rail to watch the sun drop below the horizon. We didn’t arrive early, so a rail-side position was not possible on our November 2015 visit. As the sun set, I heaved myself up on a tall brick planter box to put myself above heads (but not exclude that scene). I got a few shots before a security guard ordered me to get down! 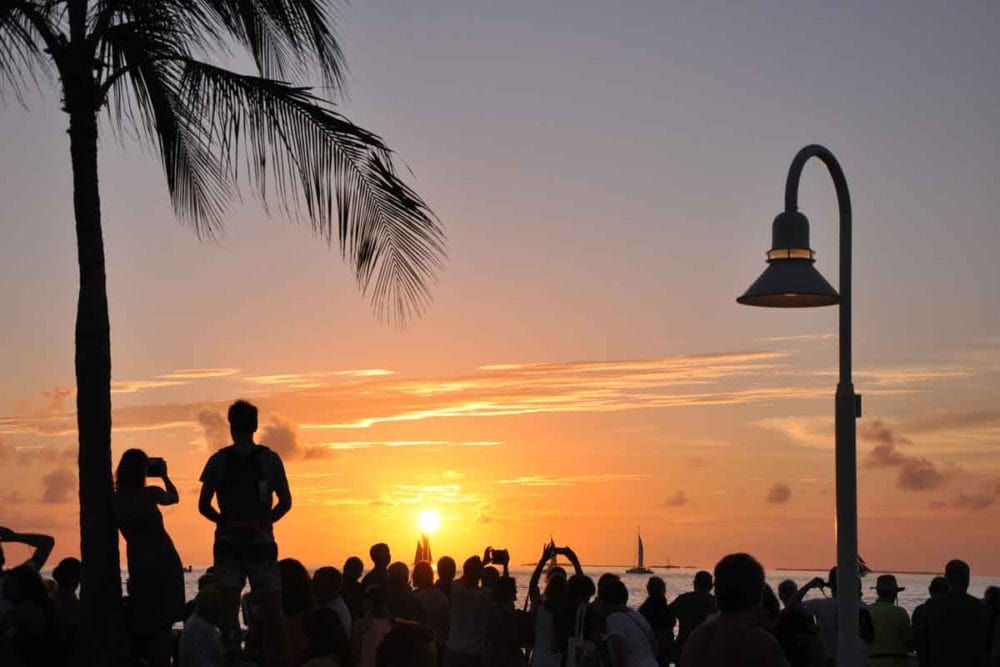 Now that you are getting down and climbing high, another one of my photography tips is to do the hokey-pokey to the right or left. Those figurative people you always see who stand as if glued in place snapping a scene precisely from where they first saw it. Sometimes that works out great; sometimes if you sauntered one way or the other, the scene that caught your eye would be even better – or that move would eliminate something like an ugly building or a store sign that distracts. I’d rather eliminate or add something to a photo in the camera rather than rely on post-processing! Call me lazy…. I call it efficient.

At this street food market in Berlin, Germany, called Thai Meadow, I moved around people standing in line to cut out faces, toes and legs I might otherwise have to process out. I then sidled up next to the boxes of colorful dumplings being sold by a vendor there and moved in closer to cut out the table edges and his legs where he sat beside the offering. 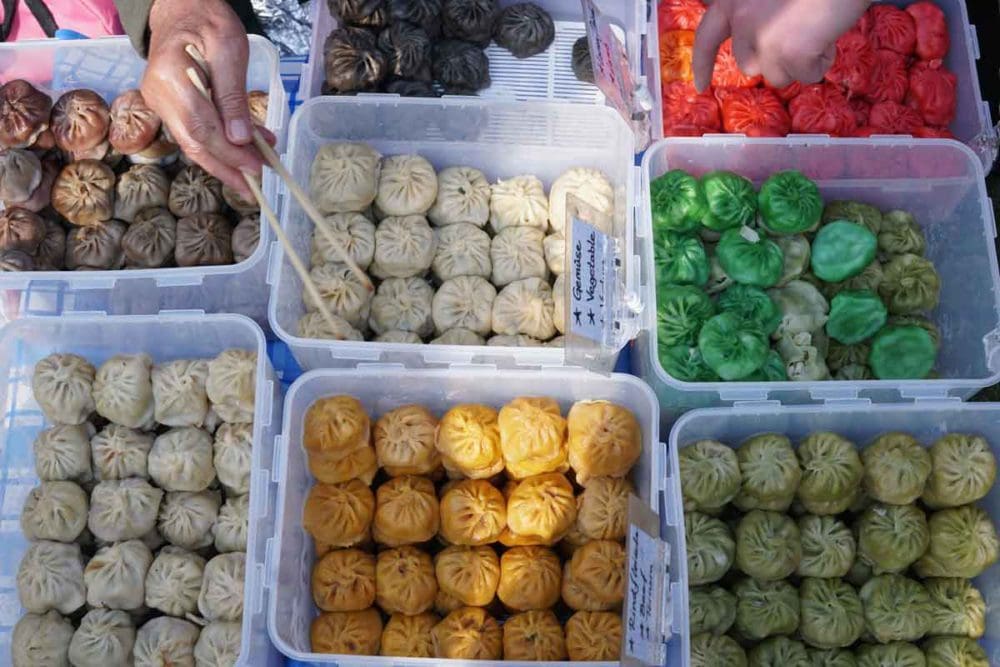 Let’s say you are hanging out in a café and you notice a window across the street. Suddenly, it’s opened and out pops a head to hang laundry on a line above your head. And you missed the shot. Well, now, that’s something that might happen the next morning, right? Be there. Or how about a reflection at a certain time of day that is gone in a flash? Note the time and get there in time. Even if you don’t have your camera with you, keep your photographer’s eye open. Sometimes travel and street photos happen in a blink of an eye, but sometimes you can observe a scene and be there, ready for it next time.

We had passed through Kunming, China, in late April 2016, and rushed through the Old Town right at sunset – but no cameras! So we made a note of the time and vowed to get back here two weeks later when we came through again. The sunset cast a warm, orange glow on all of the old dilapidated building facades. 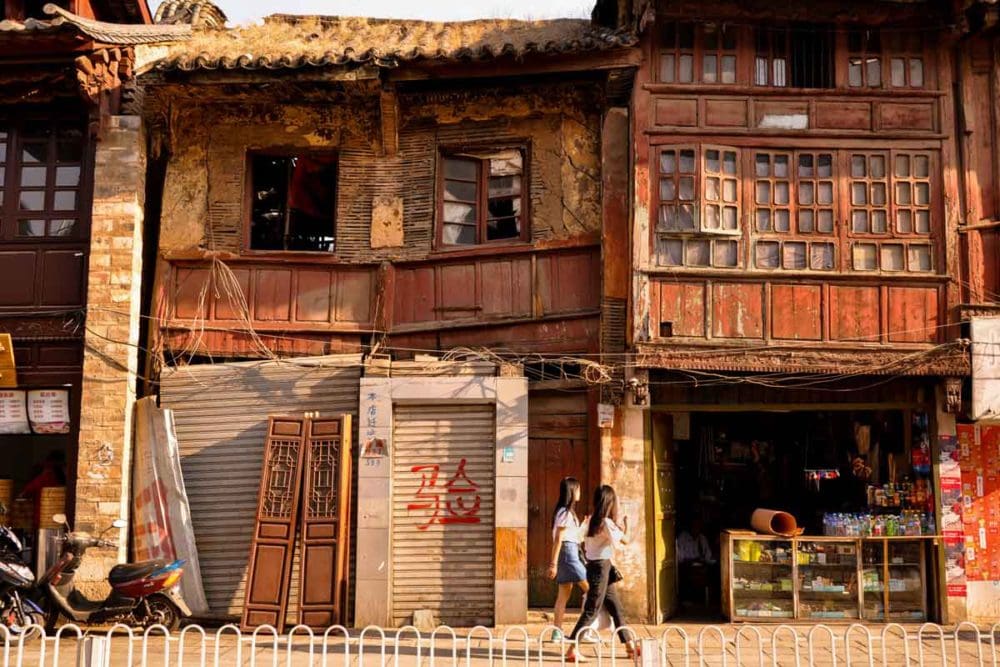 Everybody’s taste is different. Me, I sometimes like it when a subject interacts with the camera. It can be goofy, it can be endearing, it can help bring you into their world. I have been known to cluck at a dog or cat so they come toward me, wave at somebody in a window, or talk to a person so he or she looks at me. Now, you may not get what you want. The look may be askew or a hat may suddenly cover a face, but it’s always worth a try, and, as another of my street photography tips, it’s particularly good to try after you managed a few good shots before any interaction.

I drove to Oakhurst, Calif., to watch the Amgen Tour of California bike race in May 2012, but shots of cyclists whipping past are a dime a dozen, so I went for the goofy fans. I raised my camera and waved my hands at this group, telling them to jump. This was the result! In fact, the photographer from the local paper took a photo of me taking a photo, which ran in the paper the next day! 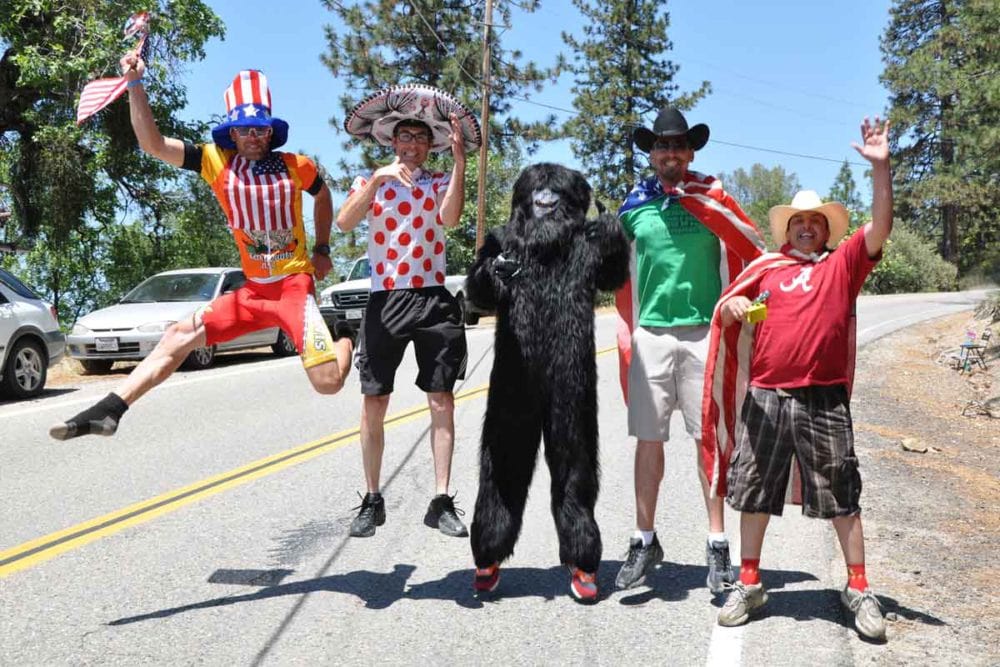 Big gorgeous landscapes or sprawling urban scenes can sometimes be difficult to make look like more than a postcard expanse – unless you do what our contributor Rick Saez does so well (and discusses in his primer on taking better landscape photos). I find myself often drawn to the small stuff – a lock on a door, part of a boat on the lake, a log with some ripples around it, a cup on a counter – and sometimes that small detail can tell the whole story. OK, OK, sometimes that sprawl or expanse in its “sprawli-ness” and expansiveness is precisely what the doctor ordered if you are indeed trying to capture that feeling. But thinking small can be really big.

Cycling along the Moselle River in Metz, France in June 2017, I suddenly came across this fluffy white stuff caught among the weeds and flowers beside the river. It was everywhere, but I got down and got up close, which I thought was much more magical than an expansive image. I found out this fluff comes from Cottonweed trees during a short season. 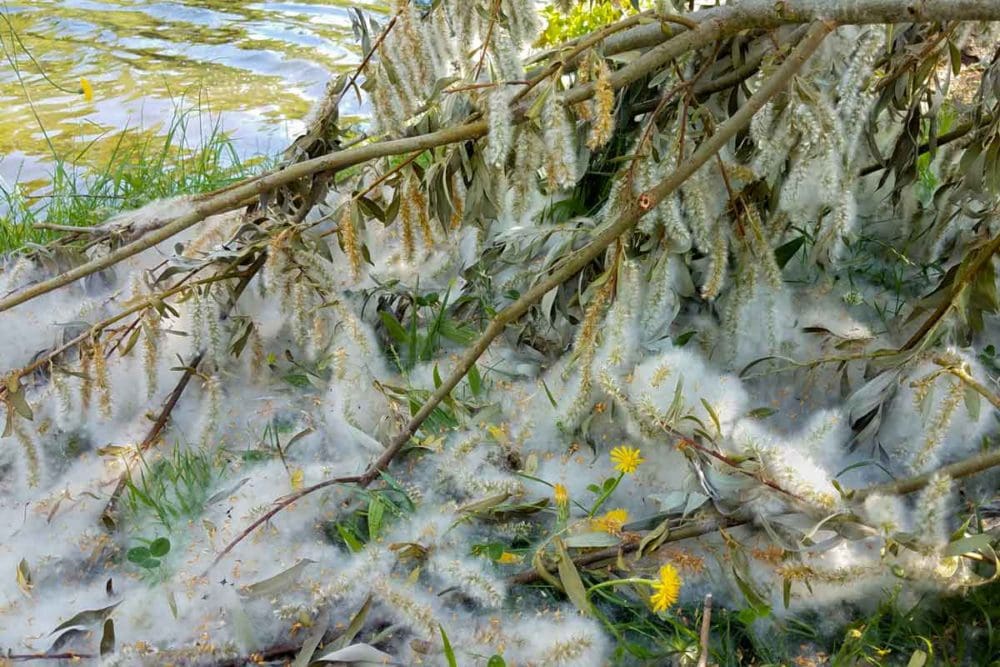 And then there is just the “reaction” of your action in taking travel photos. I tend to keep my camera on a manual mode and set on a somewhat “standard” setting for wherever I am (adjusting for the light outside or on a shadowy street or movement I anticipate seeing where I am). I don’t know if I’ll need or want to take a quick photo, but this way if suddenly a woman on a bike with a child on her shoulders whizzes by, I might be ready (not that I’ve seen that, per se). At least I know I have a chance of getting what I want without saying, “Could you just hold on a sec while I adjust?” You need to be ready and just click away. Another one of the key photography tips is, don’t over-contemplate.

Back in 1984, I traveled through then-Leningrad (now St. Petersburg), snapping street scenes and people. To catch this, I just pulled up my camera and snapped, catching the rickety bus as this man gave me a sideways glance. (Take a look at another fun photo of winter sunbathing in the same city!) 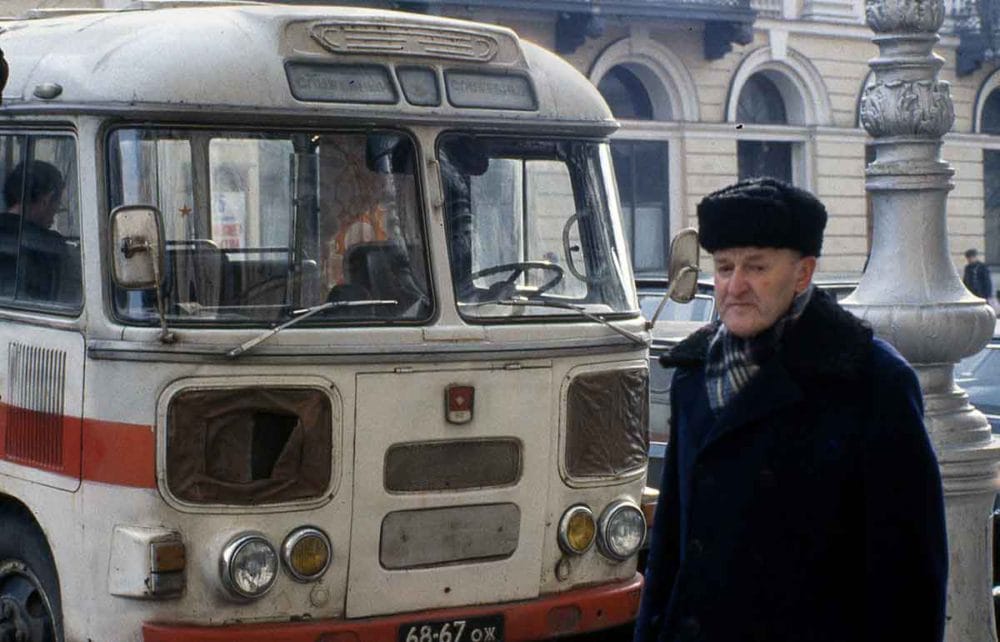 So to speak. In other words, the real photo may be of somebody taking a photo, or a crowd watching something happen, or a band from behind. Don’t hesitate to walk around behind the scene or put something between you and the attraction. Sometimes that bit of humanity or “disruption” makes for a much more interesting and improved scene.

Here, at the Stone Forest in the Yunnan Province in China, visitors can check out period costumes and parade around in them, taking photos of themselves. That’s what these two young women had done, and they were quite enjoying their selfie in May 2016. 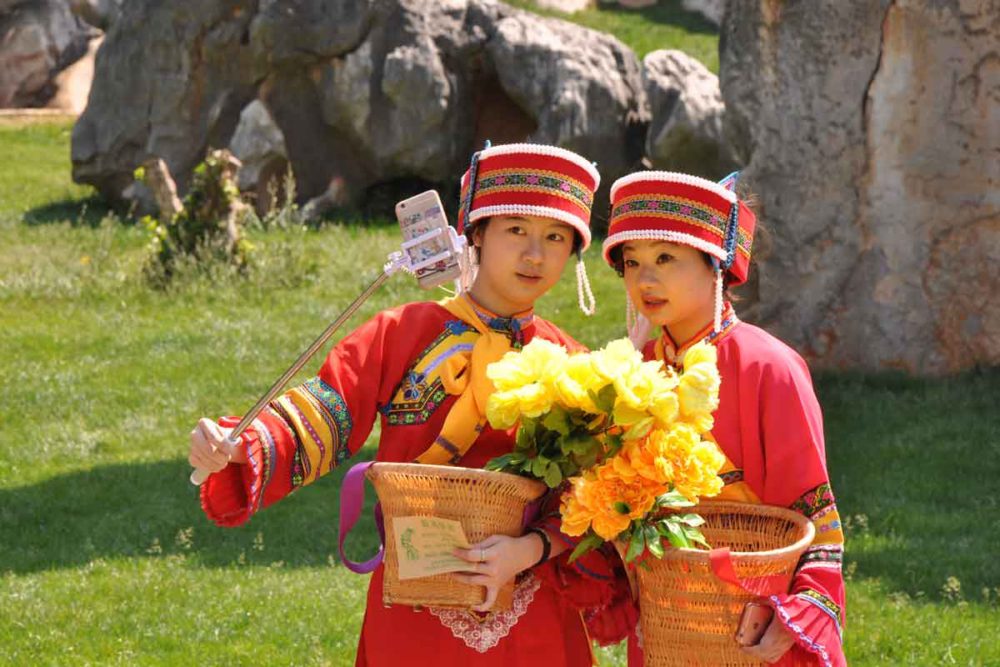 When it comes to improving travel photography and street scenes, everybody has their idea of what makes them good. Your job is to read everybody’s tips and then figure out what works for you. We’d of course love to hear what other photo tips you use to grab better travel images on the road!

To see more of Therese Iknoian’s award-winning photography, go to her website, Photos by Therese. 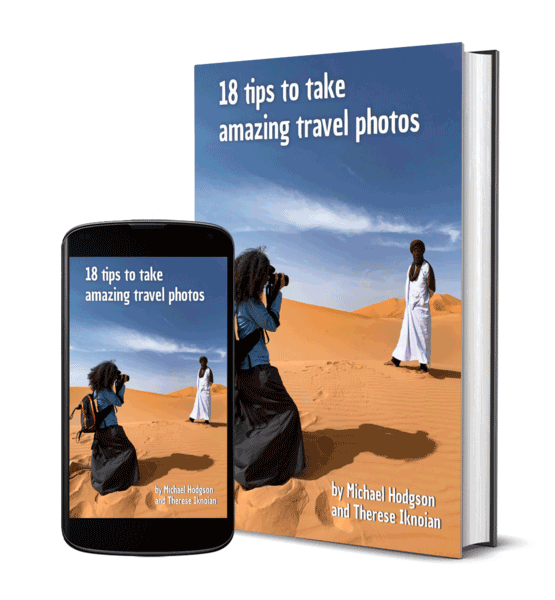 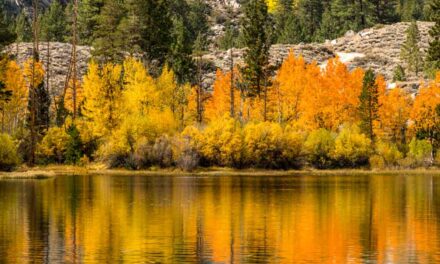 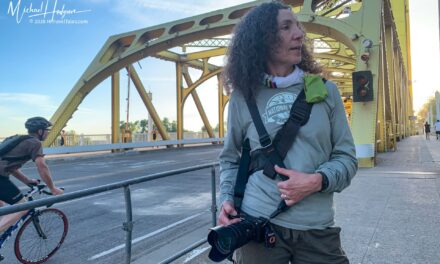 Shooting from the hip: how to take a photo on the sly 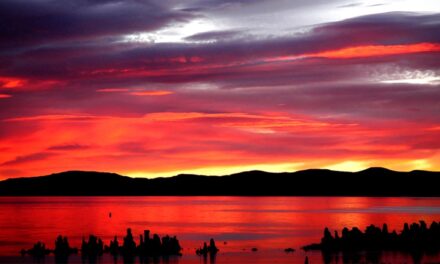 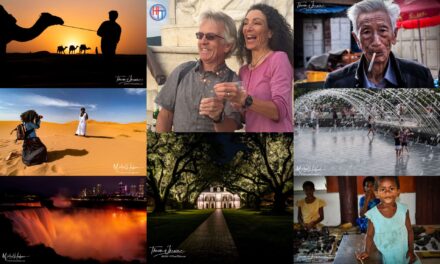 10 photos from the 10s: our favorite photographs of the decade