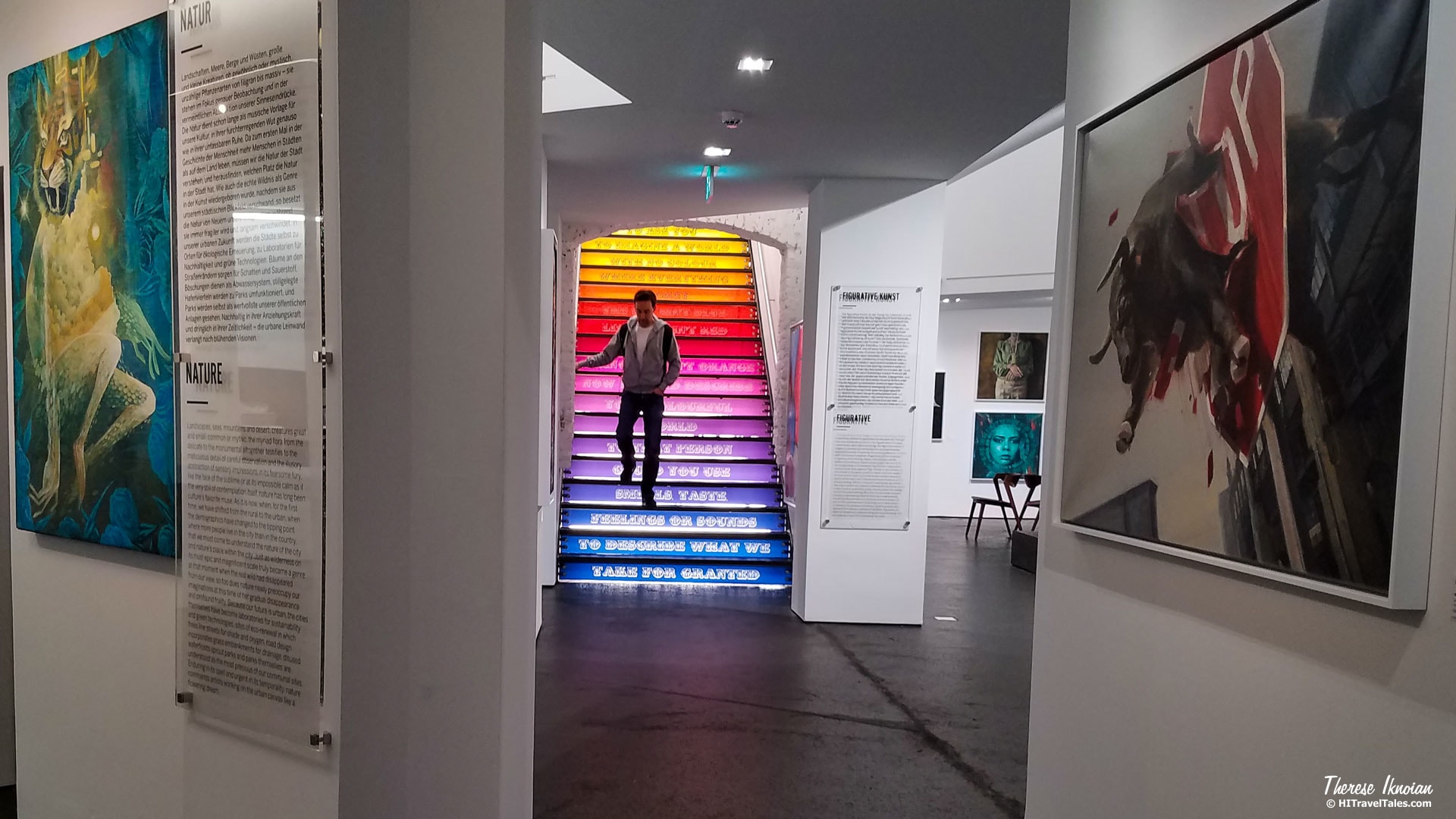 Urban Nation museum for street art in Berlin is like no other, uniting not only the nation but also the world as it turns the German capital into a giant international open-air street art gallery. Opened in September 2017, Urban Nation is just the beginning of your tour for great Berlin street art. The non-profit gallery itself is cozy, thought-provoking – and always free. But after your visit, it’ll be time to hit the streets on your own street art treasure hunt.

When asked what other street art museums exist in the world, creative director and founder Yasha Young asserts like a proud parent, “We are the only one.” OK, so one could dispute that since there are museums in Munich, Houston, Amsterdam, Paris and even St. Petersburg, among others, but the differences in how they are operated is key to Young.

Urban Nation “has workshops, a library, and an integrated residence program. We are active in all parts of public promotion,” she told HI Travel Tales. Still, she notes there are more museums opening around the world, and “that’s a good thing. The more there are, the better it is for the community.”

HITT Tip: See more about the Munich’s Museum for Urban and Contemporary Art, a.k.a. MUCA, which says it is Germany’s first urban art museum, in HI Travel Tales’ City Guide to Munich. 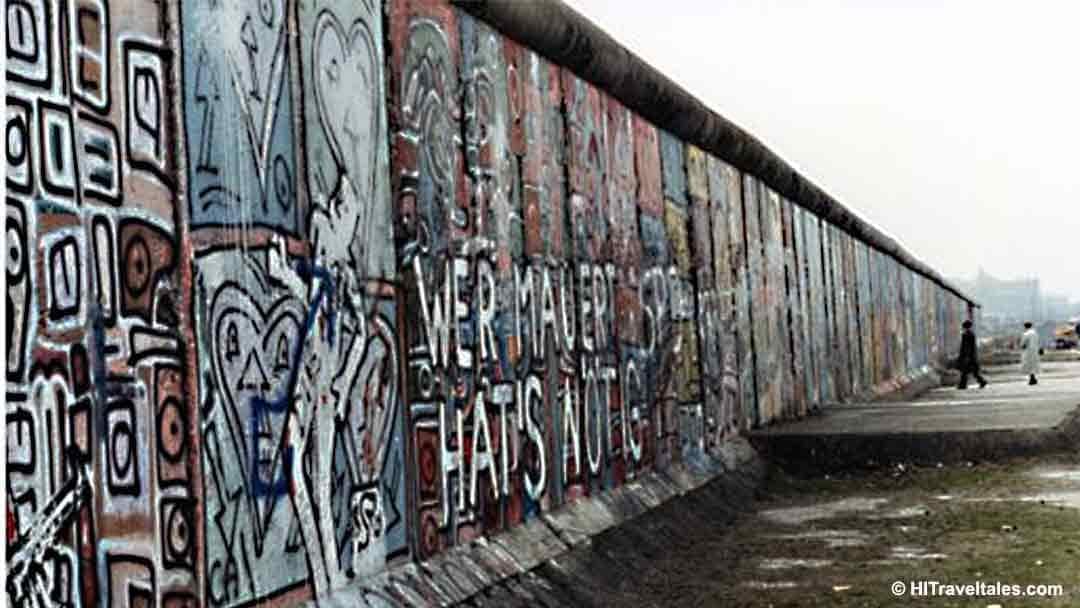 It is only fitting that Berlin is steeped in street art. Many in fact call Berlin the global capital of street art. Perhaps that title stems from 28 years of the Berlin Wall that once divided East and West during the Cold War. During that time, the west side of the wall was covered with miles of graffiti, often with political themes. Today, the Urban Nation museum has used the city’s forward-thinking mentality as a springboard to showcase international street artists both inside and outside its four walls. 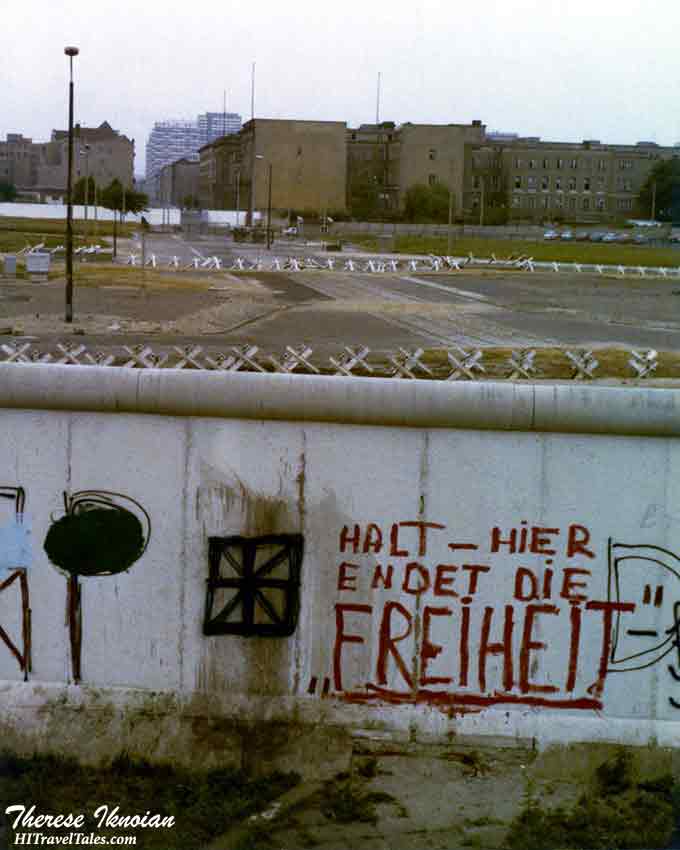 Former Berlin Wall, 1978, with a view into the “Death Zone” and into to former East Berlin — taken from an observation tower. Note the political statement “Freedom ends here” (“Halt – Hier endet die Freiheit”).

Finding great street art in Berlin can be a bit of a hide-and-seek game since it can pop up in the least expected places. You can see it outside a street car window as you roar past and then try to remember where it was. We love the way it brings boring building facades to life with color and emotion, but also the way it unites art, culture and even politics in its artwork and messages. We have heard visitors from other cities and countries say that this kind of art (often called “murals”) could never happen in their cities; as soon as something appears, it is painted over, to return the urban façade to a bland landscape. Often, such outdoor art is actually illegal, as in Los Angeles, although the Arts District still nurtures art. In Berlin, street art is lauded, appreciated and mapped, even in many cases promoted by the city’s official tourism bureau, VisitBerlin.

HITT Tip: We love street art, often posting amazing pieces to our Instagram feed, as one way for you to find street art around the world. Follow us to see our discoveries or share your own with us. To see just our Instagram posts featuring street art, go to our street art page here.

Experts say that although both graffiti and street art are types of art displayed outdoors on walls, the intention is different: Graffiti artists often care more about what other graffiti artists think and thus care less about public appreciation. They work to create a lettering style that is unique and recognized. Street artists want public viewing and often are trying to make an artistic statement. When we’ve ambled through the German capital, our heads are often on swivels as we spy works of street art on tall buildings, in courtyards or in alleys. These are often breathtaking artworks that take tremendous artistic skill – and often use advanced methods such as 3D, tromp l’œil, or color inversion, and they can be multiple stories high. 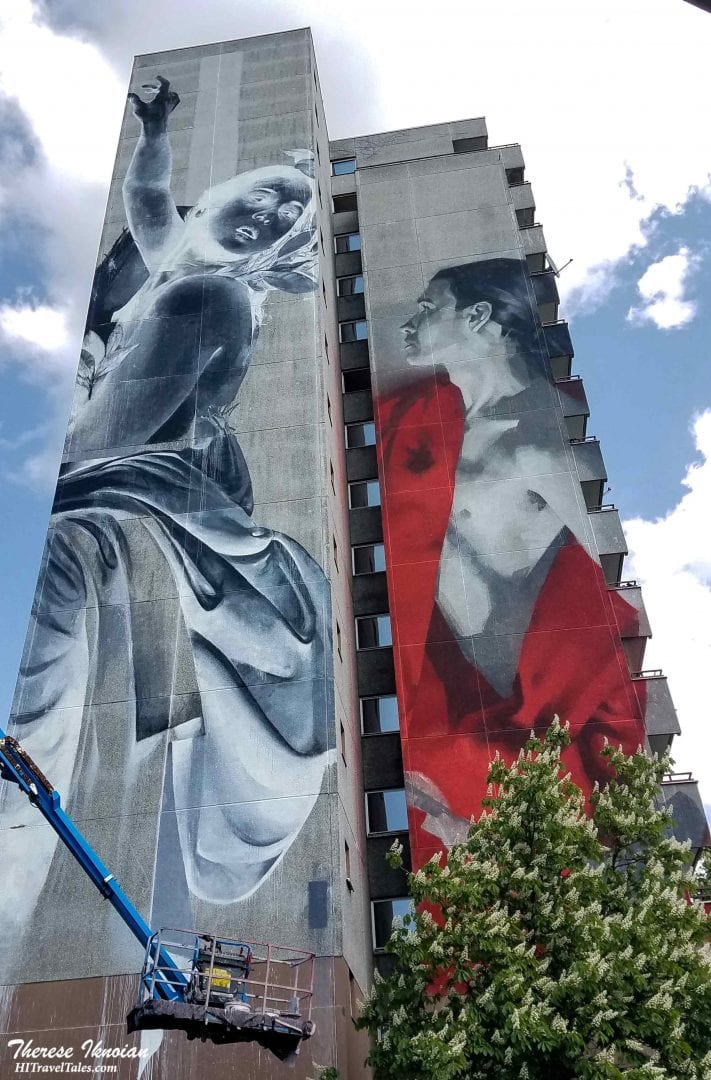 Here, a mural finished in April 2018 in time for Berlin Mural Fest: This was created “tag-team” style with Argentinian Francisco Bosoletti first painting the left side. Then, Canadian artist Young Jarus painted the right side. The art uses inversion color to give it a different look once inverted. Together the art tells the tragic love story of Daphne and Apollo from Greek mythology and is located at Wassertorplatz 65 in Kreuzberg.

Of course, there is a bit of a gray area between graffiti and street art, and thus one will see these kinds of “modern art” pieces on the street called “urban art,” “contemporary art,” or indeed “street art.” We like what the Design Group SchriftFarbe wrote about the difference between street art and graffiti, as well as this essay from Quartz magazine.

But just as graffiti “taggers” may mar street art, so too do street artists themselves realize that their work is often transitory; walls are often painted over simply because it’s time to showcase another artwork. So, if you see something you like, take a photo now! Even the entrance to the building with the Urban Nation Museum just changed in May 2018, to a piece by Dutch Artist Super A, below. 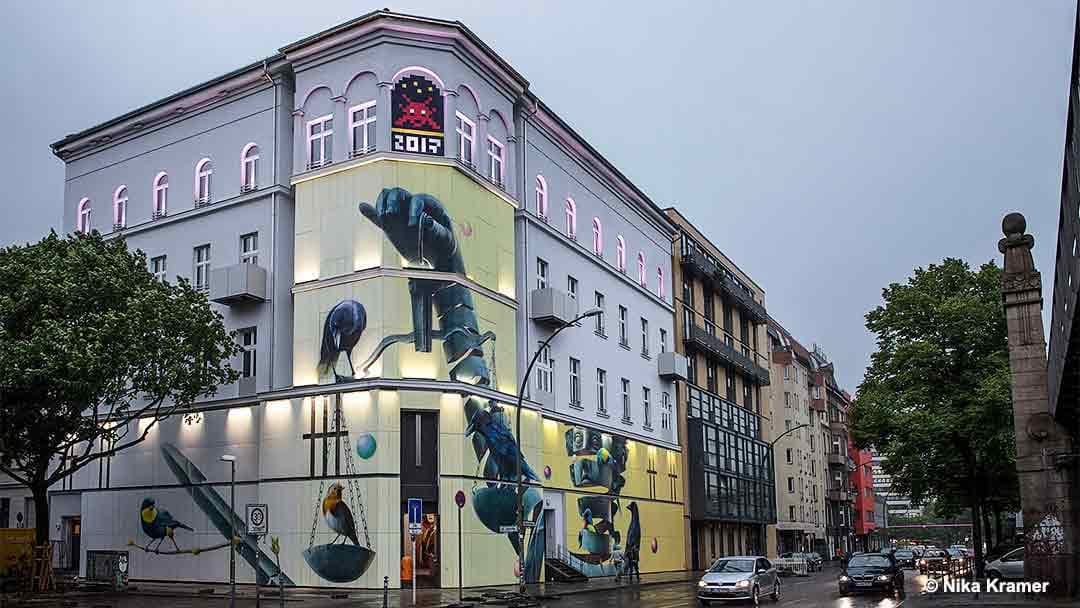 Urban National museum for street art in Berlin with its new facade painted in May 2018.

Young, as the mind with the vision behind Urban Nation, used to run three Strychnin galleries in Berlin, New York and London, but she says the concept of Urban Nation, a “living museum,” was rambling around in her head since 2007. Why?

“The opportunity to pursue not only a holistic approach for artists, but also careers in the world of art and even art itself as part of such a large project was a unique challenge,” she says. “But finding the right city and the right partner was the last piece of the puzzle. It is something special to be able to create something that really has the potential to shape art history as well as to integrate cities and politics.”

Urban Nation began in 2013 with its “One Walls” and “ProjectM” projects, before its brick-and-mortar museum opened in late 2017. The entire non-profit project is funded by the Berliner Leben foundation, operated by Gewobag, a housing company in Berlin and the Brandenburg region that manages tens of thousands of residential units and offers other property services.

In the Schöneberg district of the city, Urban Nation is one of the best places to see Berlin street art and to start your urban art tour. The beautiful thing is, that it is (at least at the time of writing) open to all at no charge (10 a.m. to 6 p.m., Tuesday to Sunday).

HITT Tip: The museum is only a short walk from the Nollendorfplatz station with four underground lines – the U1, U2, U3 and U4. Plan your excursion using the BVG public transport agency’s website.

It is clear from the Urban Nation website that this project is not just about a museum, but about urban contemporary art in general and great street art overall. Museum information is just one website section, but you can also find a directory of artists and an art map (although the map at the time of writing is not a thorough compendium of all street art in Berlin or even all of Urban Nation’s projects). 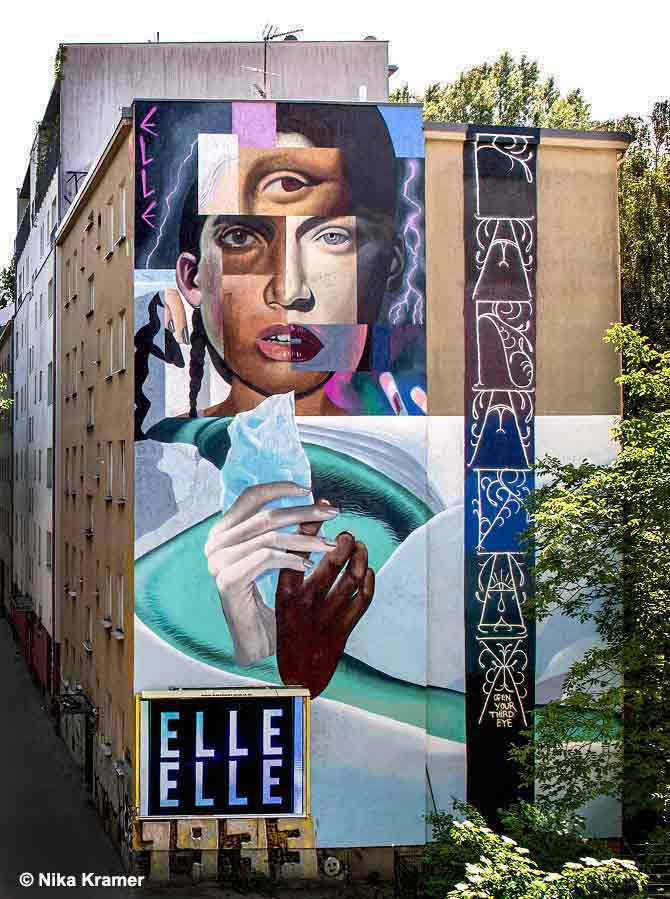 A soaring mural by New York artist ELLE at Wienerstrasse 42 during the 2018 Berlin Mural Fest in May.

And there is more to come from this still-developing gallery and project for Berlin street art, not only in the German capital but also around the globe since projects are commissioned in other venues. Young says she choose Berlin as a museum base because it is a visionary, innovative city. She calls the German capital the best place to start and to house the project nucleus. “After that, Urban Nation can continue out into the world and, who knows, eventually even to New York.”

Your urban art tour of street art in Berlin may begin at Urban Nation. But it will continue around the world.

There is so much to see and do in Berlin! Use our travel map of Berlin, in tandem with our many articles like this one, to help you decide where to go, what to do next, and even find your way from one fantastic sight, restaurant or place to stay to the next. 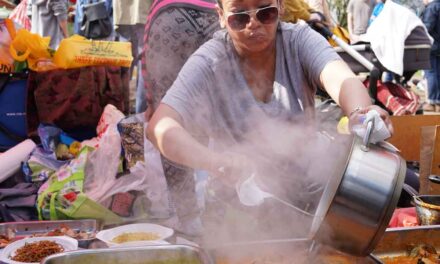 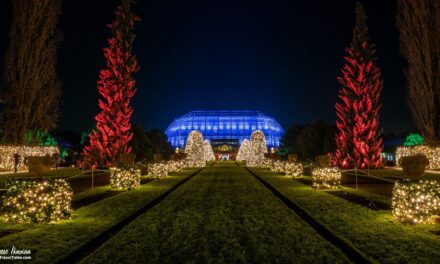