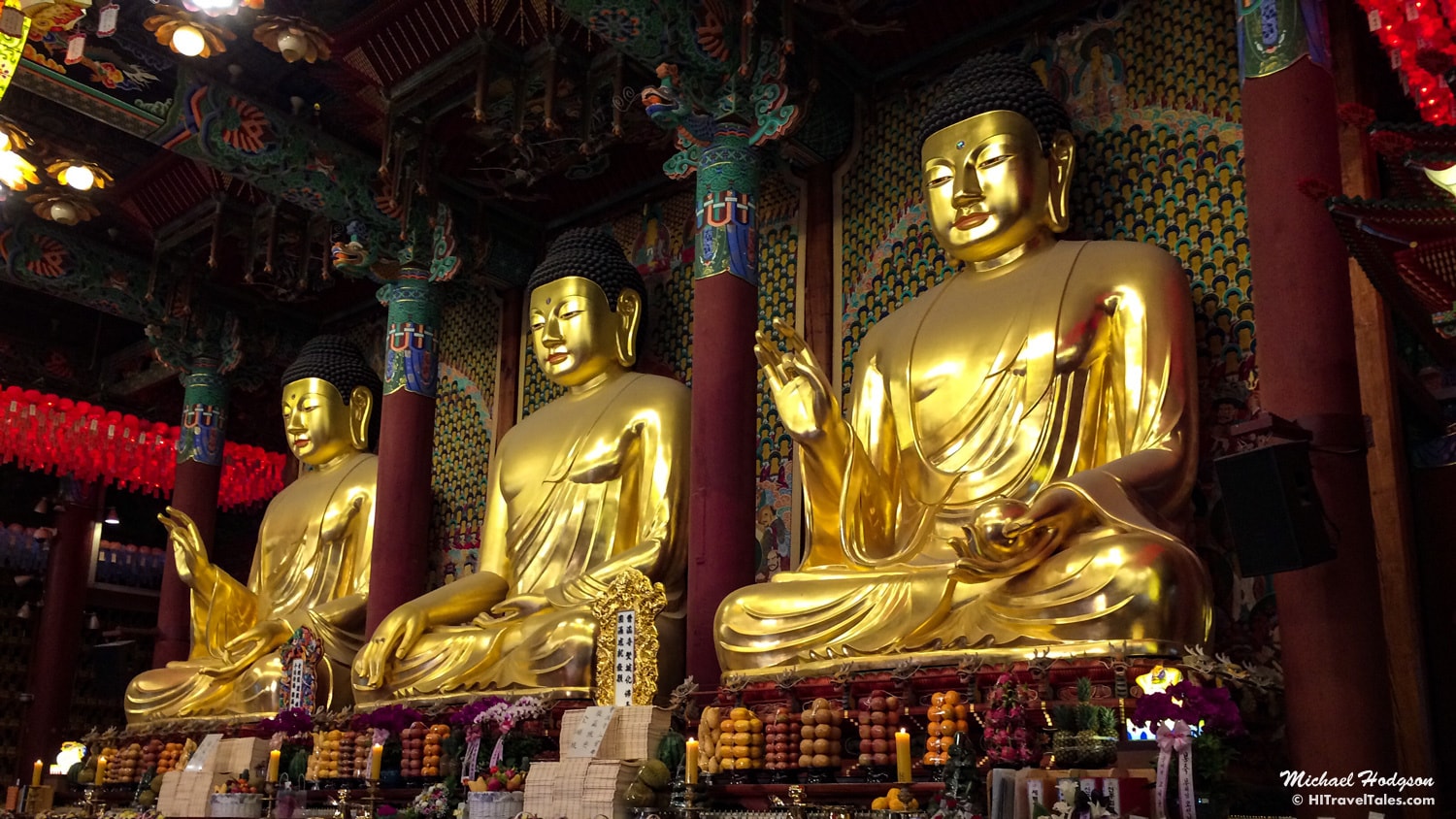 Widely celebrated in many Asian countries, Buddha’s birthday festival in Seoul, South Korea, was one of the highlights of our visit there. We took part in temple celebrations, Buddha blessings and washings, were awed by colorful lanterns and candles, and attended parades…. Take the time to be part of Buddha’s birthday celebration. You won’t regret it. 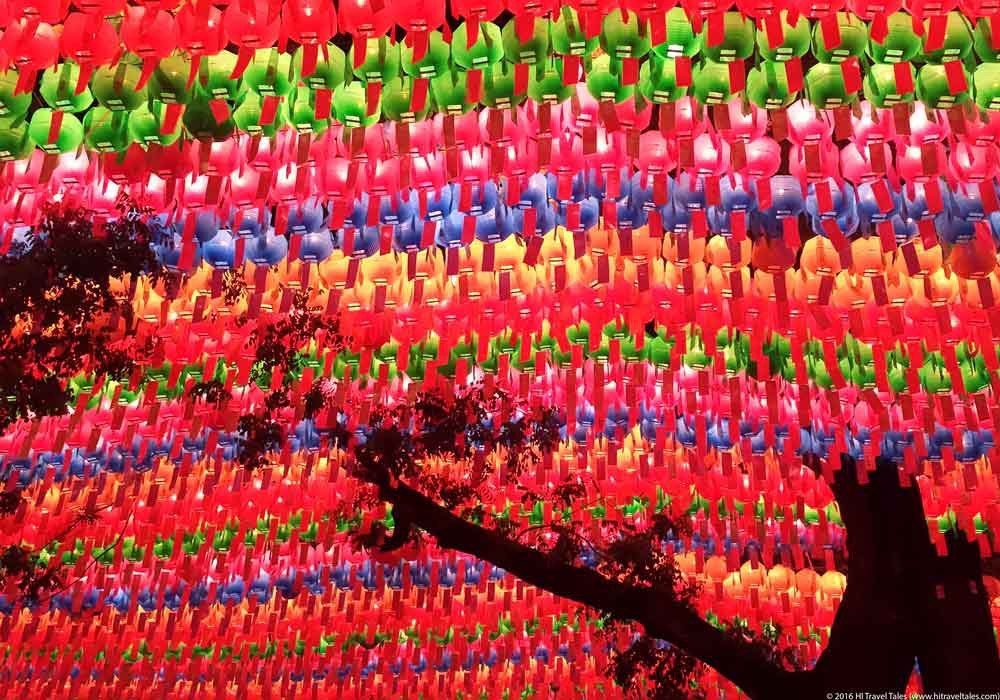 Lanterns engulfing a tree in the courtyard at Jogye-sa Temple create a mysterious glow at night. (photo by Therese Iknoian)

Of course, you’ll need to do a little research to find out on what day Buddha’s birthday festival falls each year unless you know the Chinese lunar calendar by heart. The holiday is celebrated on the eighth day of the fourth month, according to that Chinese calendar, meaning Buddha’s birthday festival in Seoul can fall sometime between late April and late May. In 2015, it was May 25. I discovered this date prior to booking our flight there in 2015 and extended our stay a couple of days so we could experience the celebration. 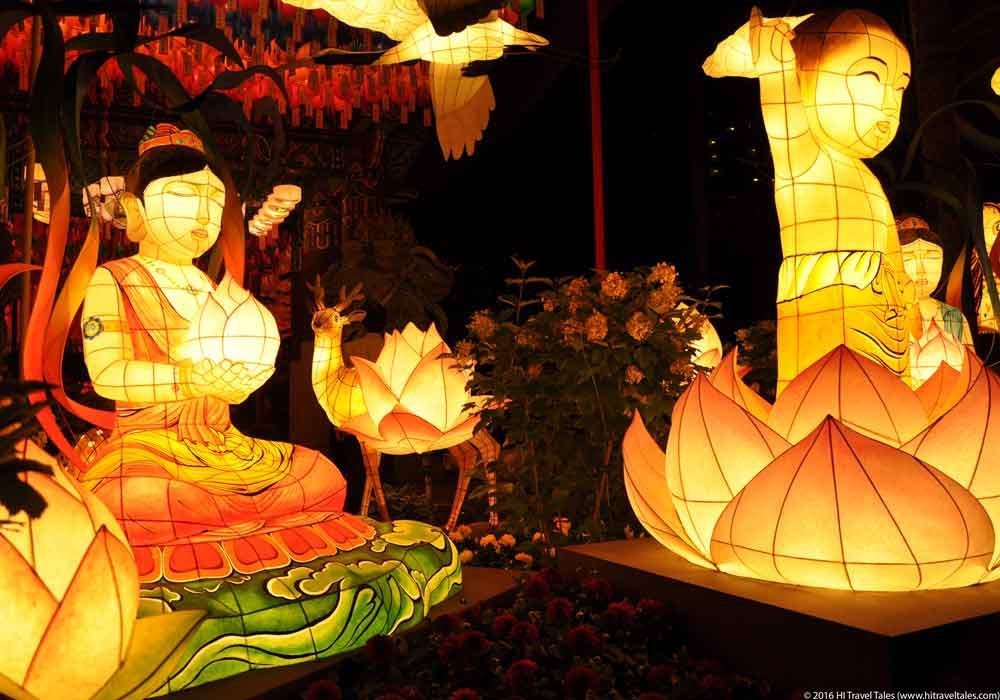 Lotus lanterns on display in a park next door to Jogye-sa Temple for Buddha’s birthday in Seoul. (photo by Therese Iknoian)

You’ll also need to be prepared for crowds at Buddha’s birthday festival in Seoul, and you’ll want to book any lodging and travel early. The day – also called the Festival of Lanterns or the Lotus Lantern Festival — is a public holiday as well as a time of celebration for 23 percent of the South Korean population that is Buddhist. A 1,300-year-old tradition celebrating the life and enlightenment of Buddhism’s founder Siddhartha Gautama, the lantern lighting is supposed to brighten the hearts of participants as well as brighten the world. We’re all for that! 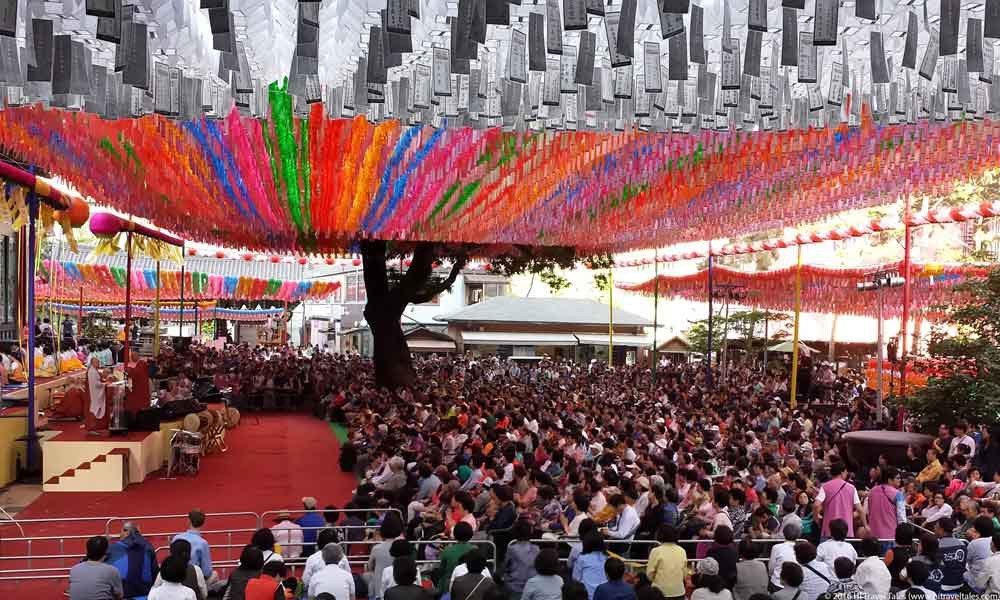 Crowds pack the courtyard with its “lantern ceiling” at Jogye-sa Temple hours prior to festivities. (photo by Therese Iknoian)

Most of the celebrations and lantern lightings start about a week prior to the big day, although lotus-shaped lanterns are hung all around the city starting weeks ahead of time. The Lotus Lantern Festival’s official website can also be of help in planning for your experience at the Buddha’s birthday festival.

HITT Tip: The official tourist office for Korea, Visit Korea, has a good summary of events for 2016 on its site , and we expect it would have one live in a timely manner for other years too. Here is the link to the Visit Korea home page also. Or try the Visit Seoul tourist office if you are just in that city.

What can you do for Buddha’s birthday? 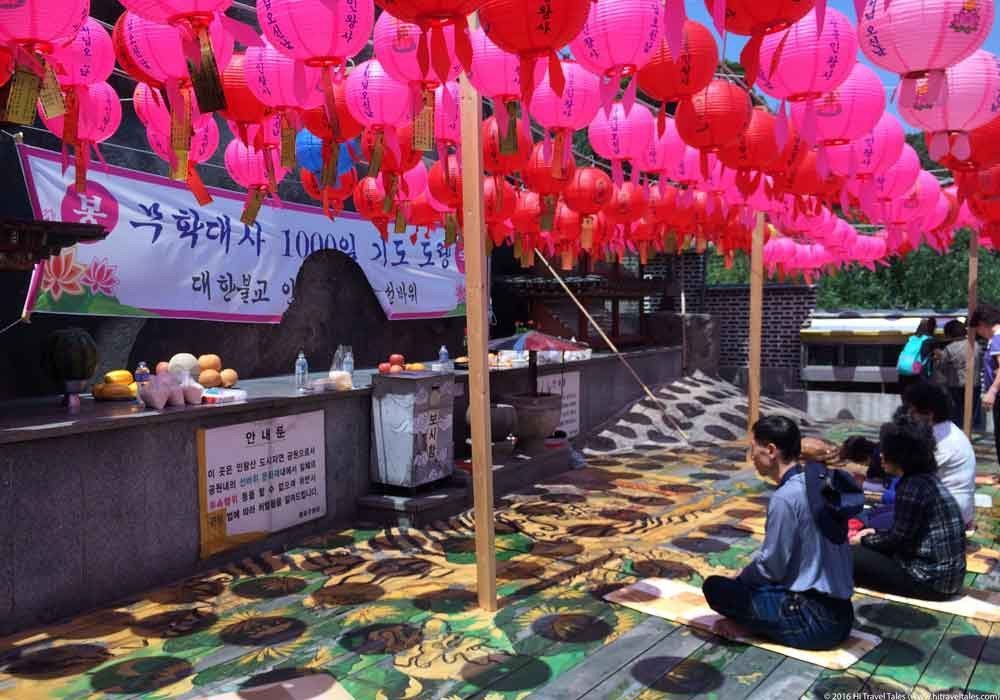 In prayer at a Buddhist temple on the path to Inwang-san shamanist shrine. (photo by Therese Iknoian) 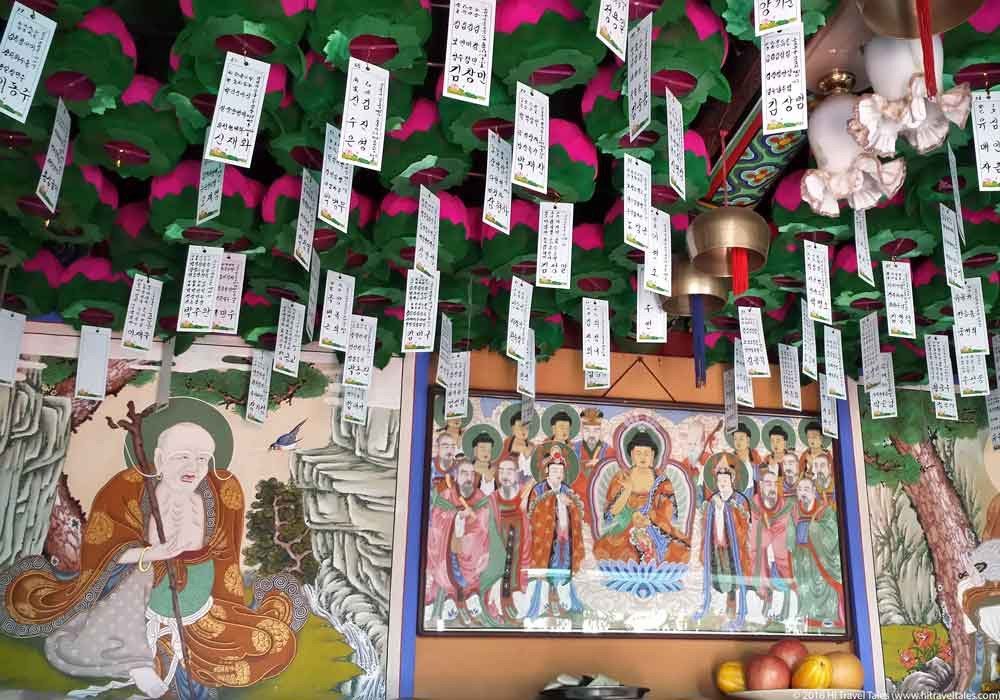 Lotus lanterns and blessings hung in a temple. (photo by Therese Iknoian)

Just because the big celebrations focus in and around Jogye-sa does not mean that’s the only place to experience the joy and color of Buddha’s birthday festival in South Korea. The Bongeun-sa Temple on the opposite side of the river farther south of there is another location for celebrations and lantern lightings. 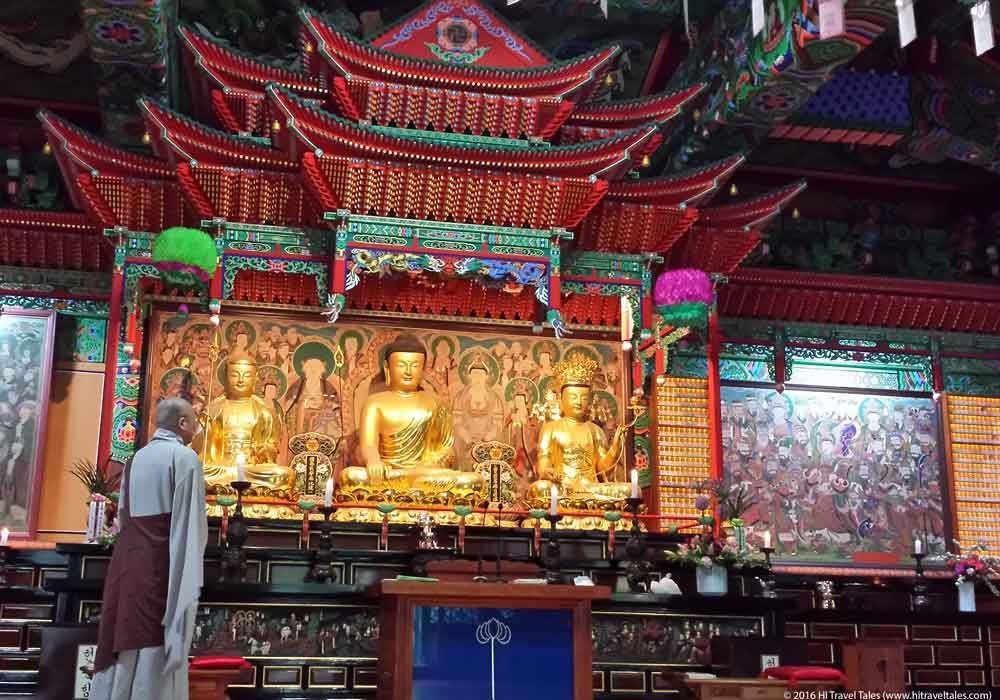 We stumbled across the Daegaksa Temple accessed through an alley near the Shamhwa Paint Store just north of the Jongno station and jewelry shopping street. The monk invited us in for his evening prayers. (photo by Therese Iknoian)

HITT Tip: If you haven’t planned your schedule in the week prior to Buddha’s Birthday in Seoul, just wander on over to Jogye-sa Temple. You’ll be sure to find something to see there. To get there, take Line 3 (orange) to Anguk station and take exit 6 to walk south. You can also take Line 1 (purple) to Jonggak station and take exit 2 to walk north (a bit farther). Or to take in Tagpol Park on the way, take Line 1 to Jongmo station, and take exit 1 or 2 to walk east then north (or even north then east). Please refer to a map (like our map below) to help you maneuver the streets.

Think beyond scheduled events on calendars: 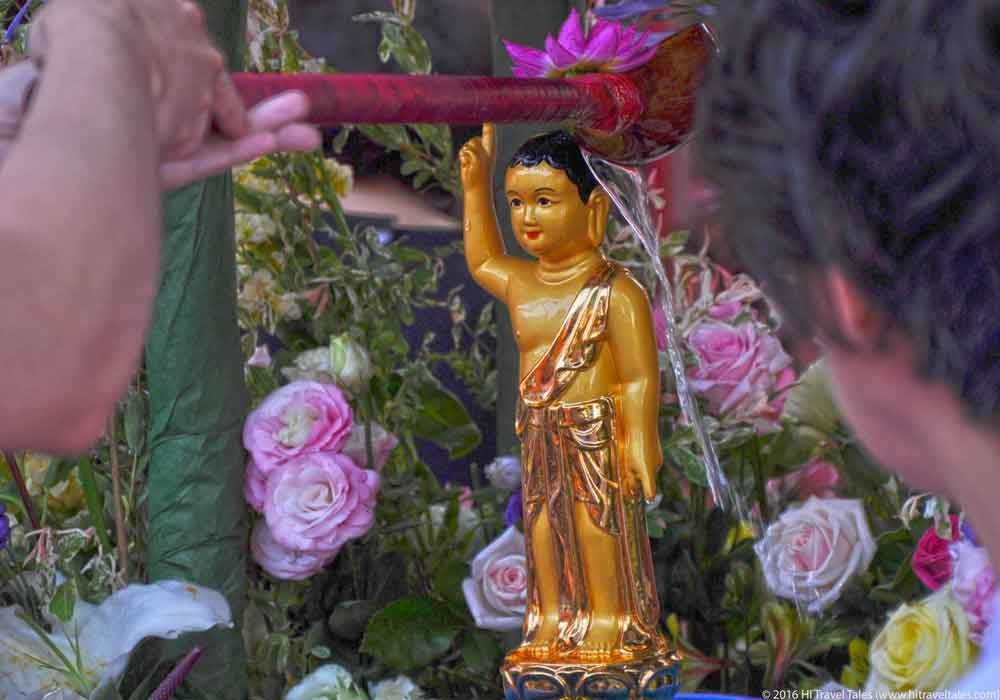 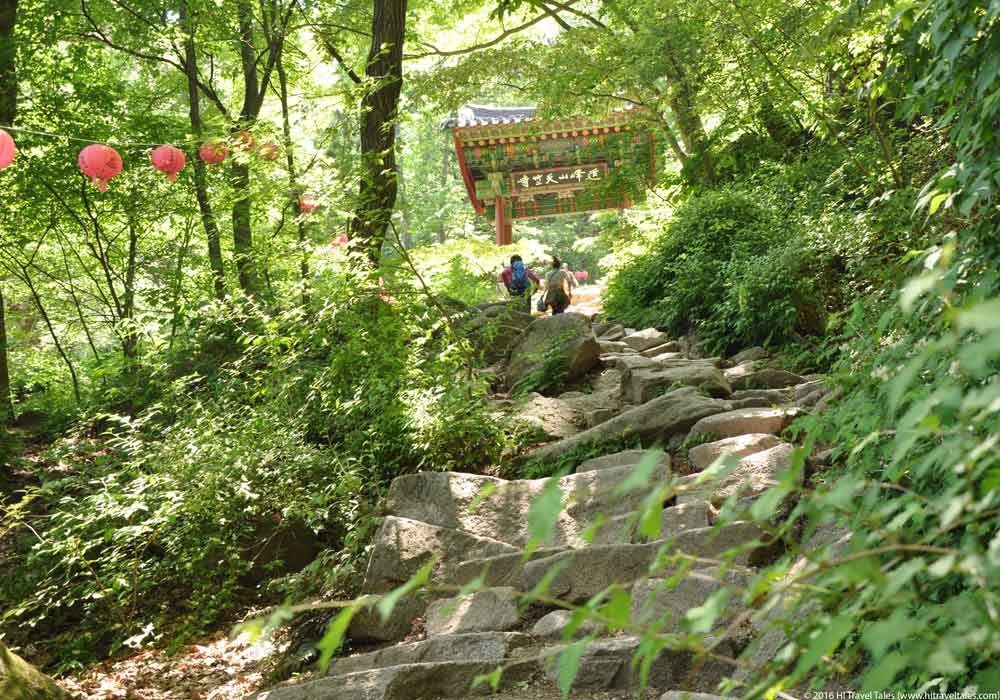 Lanterns along the steep, rocky trail toward Bukhansen peak. (photo by Michael Hodgson)

HITT Tip: IF you want to learn more about Buddhism in South Korea prior to experiencing Buddha’s birthday festival in Seoul, take a look at koreanbuddhism.net. 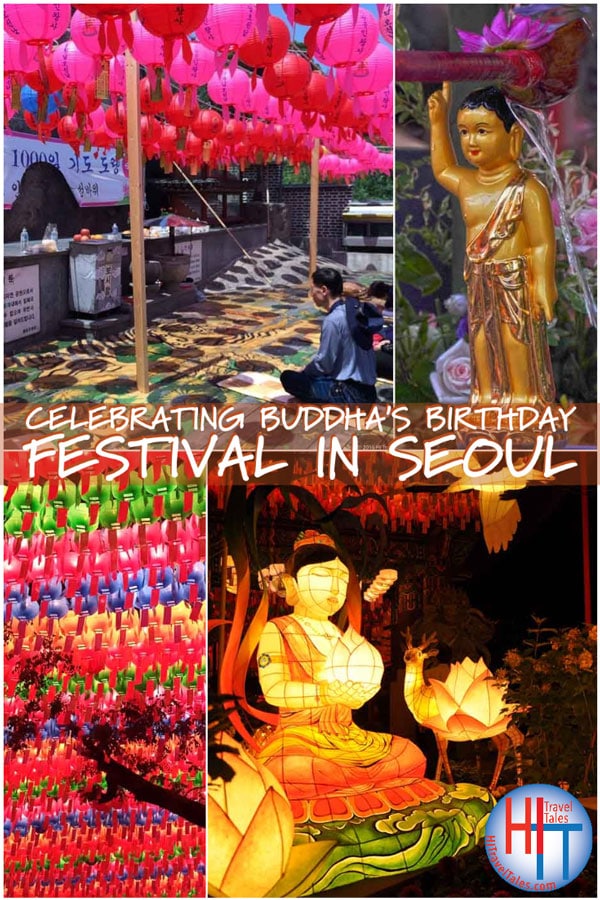 Discover more great things to do in Seoul

Heads up! This information on the Buddha’s birthday festival was accurate when we published it on HI Travel Tales, but, as we know, traveling is all about changes (and inflation, sadly). It is your sole responsibility to confirm prices, transportation schedules, hours of operation, safety and health considerations, and any other important details before your adventure. 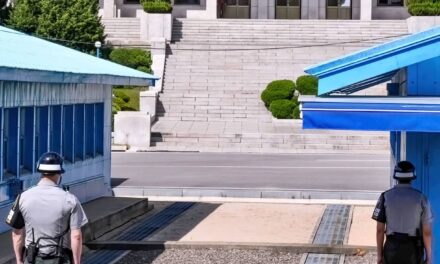 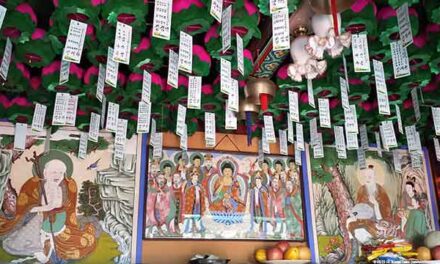 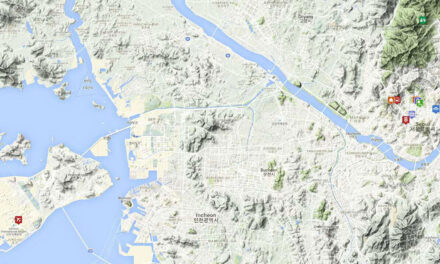 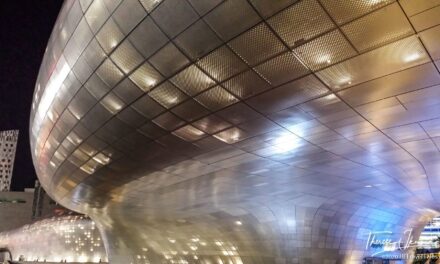