Take a tour to the top of the gasometer in the Schöneberg neighborhood to experience some of the best views of Berlin, see many of the city’s important landmarks, and learn about Berlin’s history.

Update: As of 2021, the gasometer in Berlin has been closed to climbs like the one we did in 2020 described in the story below. Management of the EUREF business park where the Berlin gasometer is located has decided to rebuild the space. Since it is an historic monument, the look must be maintained, but the inside area will be transformed into a conference center, event venue and a multi-story office space. Although climbs as we did will not likely be possible, the campus noted it is including a so-called Sky Lounge with a 66-meter-high (216 feet) publicly accessible terrace. After its completion in approximately 2024, tours will likely re-start but just from the outside and the terrace.

A cold March wind whistled through the girders and catwalk grates of the gasometer as our footsteps resonated on metal stairs. To the east, the lights of the landmark Berlin TV Tower were beginning to twinkle. To the west, fingers of twilight color tinted the skyline in various shades of orange. We were on a Berlin gasometer tour in the Schöneberg neighborhood, experiencing what could arguably be one of the best views of Berlin, sunrise to sunset. This former gas holder is not, however, a destination for anyone with a fear of heights!

The skeleton tower is 78 meters (256 feet) high. Every 10 meters (33 feet) there is one of seven circular catwalks connected by steel girders. A rusty metal staircase (still safe!) connects it all with more than 400 total steps. The entire structure is wide open, with only waist-high railings on either side of the stairs and catwalks. What that means is you get a truly one-of-a-kind and virtually unobstructed 360-degree view of Berlin’s skyline, from anywhere you stand, on any level. The highest catwalk is particularly spectacular with nothing but sky above (remember, we warned you if you have a fear of heights). The catwalk rings and the stairs are open steel grating, too, so look down only if you dare. 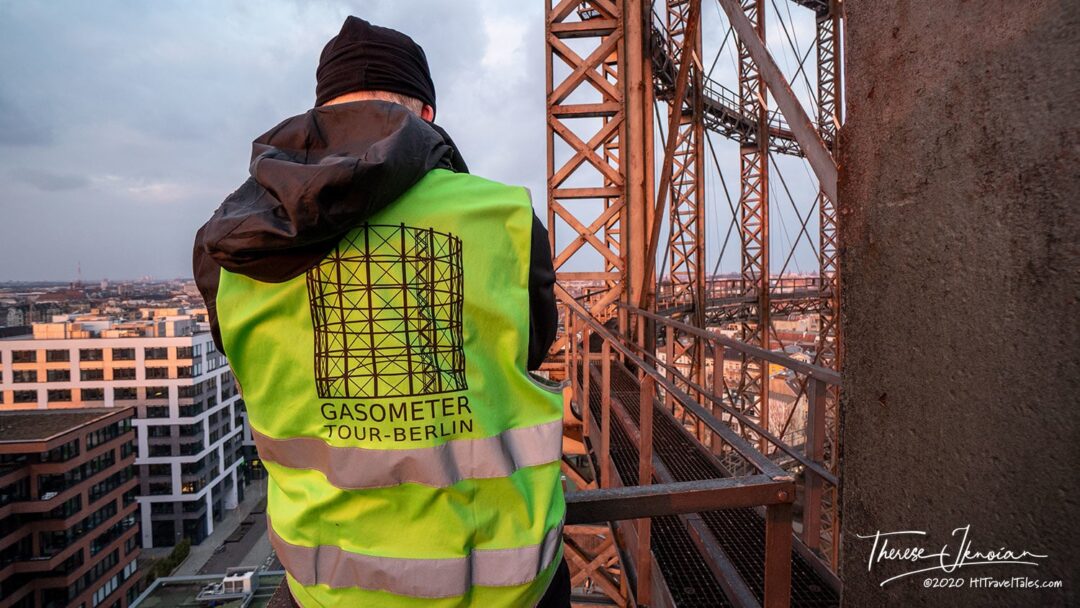 The rusting steel, cylindrical framework is the only part of the original structure, built in 1910, that remains today. During its more than eight decades in operation, the structure functioned as a low-pressure gas container, delivering gas to businesses and homes to keep the lights on and work efficiency high. In short, it worked this way: Coal was burned at a very high temperature creating gas that was stored in the container. As gas was pumped into the flexible container inside the framework, that container would rise all the way to the top of the metal skeleton structure. As gas was used during the day, the container would slowly drop down. Neighbors would eye the structure and the height of the inside container to assess the current gas situation, we were told. Coke, a by-product of the burned coal, was used in the production of iron. Tar, another by-product, was used for roadways. Of course, no one cared as much then, as they do now, about all the toxic waste released into the air and the ground. This particular tank was decommissioned in 1994.

Today, standing in the middle of the private EUREF science and research campus, the gasometer is considered an industrial heritage site. According to Sascha Maikowski, director of the gasometer guide service in Schöneberg, there are only about 100 gas holders left standing in the world – and, he says, this is the only one that has tours and climbs. Maikowski was asked to start the guide service in 2008. These days, nearly 50 percent of those who take tours are from Berlin, another third is from elsewhere in Germany, and only 10 percent are non-German. Tours, normally 80-90 minutes, are also offered on select days in English.

“I’m into story-telling about the world and in Berlin,” he says. “I’m showing people an interesting location – and showing people themselves, too. If you go up there and are scared, when you come down, you feel like a hero.”

Now, all that remains of the interior structure is a retrofitted dome that serves as a specialized event space for concerts, presentations, and business meetings. The metal skeleton is kept in good repair and can be climbed and enjoyed only on special guided tours. The tours are normally offered between March and November, depending on the weather, and can be canceled due to special campus events (such as political visits, you know, like the country president!), rain or very cold weather.

HITT Tip: Take our word for it, it is colder up top when the wind blows – MUCH colder than you think it will be. So, plan your layers, and then add another layer. Do not be shy to bring extras, including caps, gloves and wind-resistant outer layers. Most importantly, make sure everything is tethered to your body, including smartphones. No packs allowed due to some narrow walkways.

From the various levels, and especially from the highest catwalk ring, you can see almost every major landmark in Berlin: For example, to the east, the famous TV Tower, the Reichstag dome, the Berlin Cathedral, and the Sony Center; to the northwest the historic Schöneberg City Hall and the Schöneberg sports hall; and to the southwest the old Cold War listening station and street art mecca, Teufelsberg.

“We want to give a feeling that this is very special,” Maikowski says, “and that you won’t forget it.” 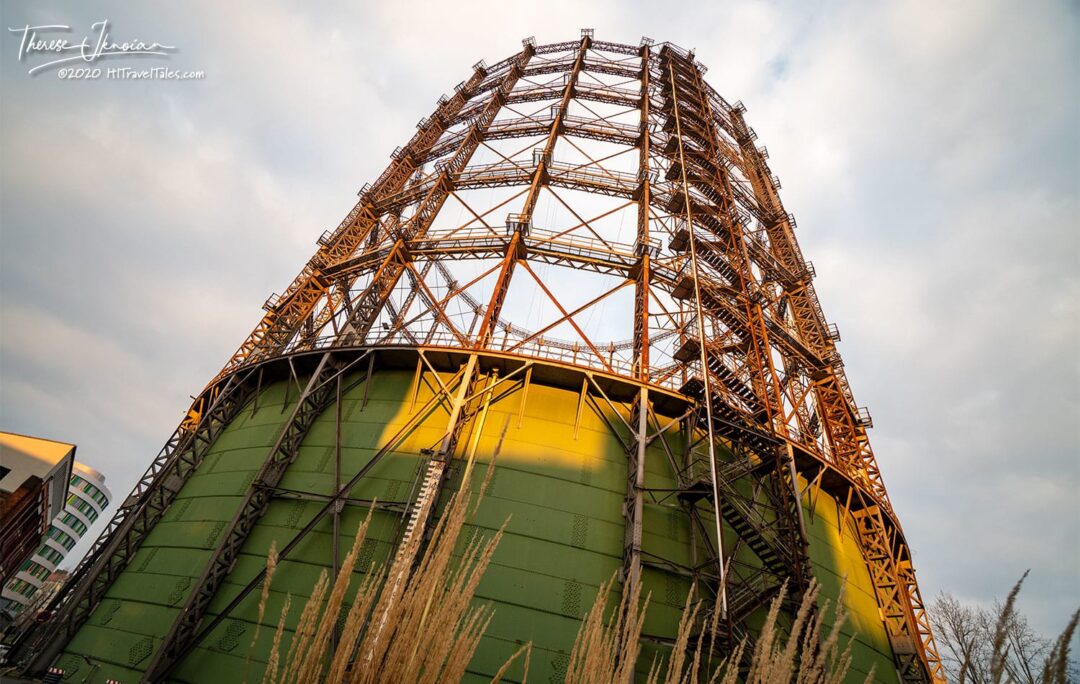 We can vouch for the fact that the experience is quite special. In the past few years, the approval for the tours has come late because of a proposed gasometer renovation and some construction on campus – but it has come. However, every year it remains possible the tours may be canceled – then who knows if they will ever happen again. Our advice: Go now if you are interested since you may not have the chance in the future.

For a special, relatively  “insider” adventure in Berlin, book a gasometer tour by sending an email to gasometertour@gmail.com. And tell Sascha HI Travel Tales sent you.

HITT Tip: Getting to the gasometer in Schöneberg is a bit tricky since it is in an area surrounded by tracks with only certain ways in and out. Give yourself extra time so as not to be late. If for example you take the S-Bahn to the Schöneberg station, you will take the exit toward Sachsendamm (and ONLY that exit), then follow the signs out of the station toward Dominicusstrasse / Sachsendamm. Once on the street, you will cross it, and then follow the Torgauerstrasse (Torgauer Street), which runs BETWEEN two train elevated train tracks. That street takes you onto the EUREF Campus, so go straight then take a quick left. At this point, you really can’t miss it since the tall steel framework is above you. For online maps, input Torgauerstrasse 12-15, Berlin-Schöneberg. 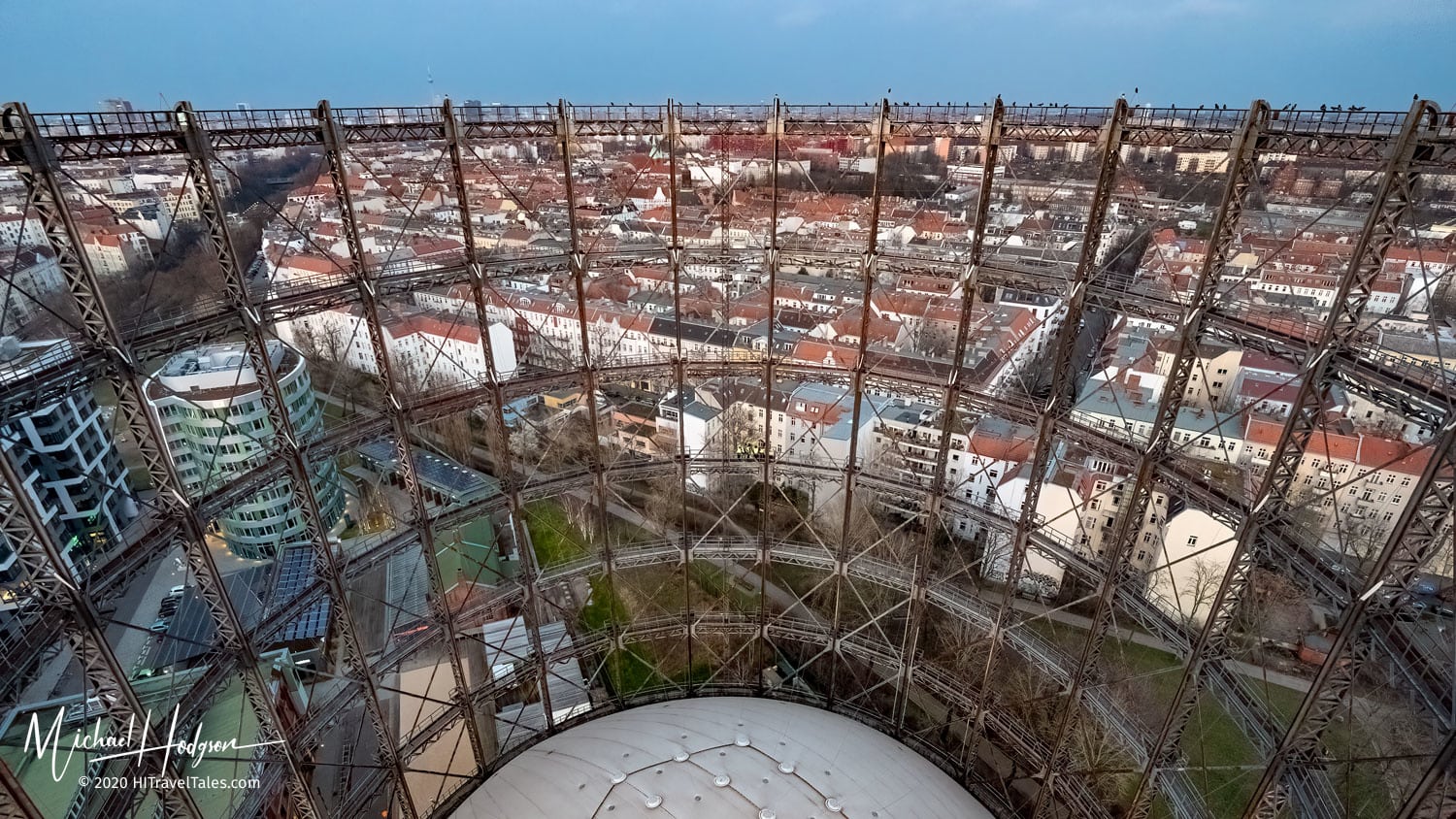 The gasometer provides for nearly unobstructed 360-degree views of Berlin from almost anywhere. For this photo, Michael was standing on the top catwalk, shooting east toward Therese and the tour group in yellow reflective vests on the fourth catwalk from the top. In the distance you can see the famous TV tower rising above the top catwalk. 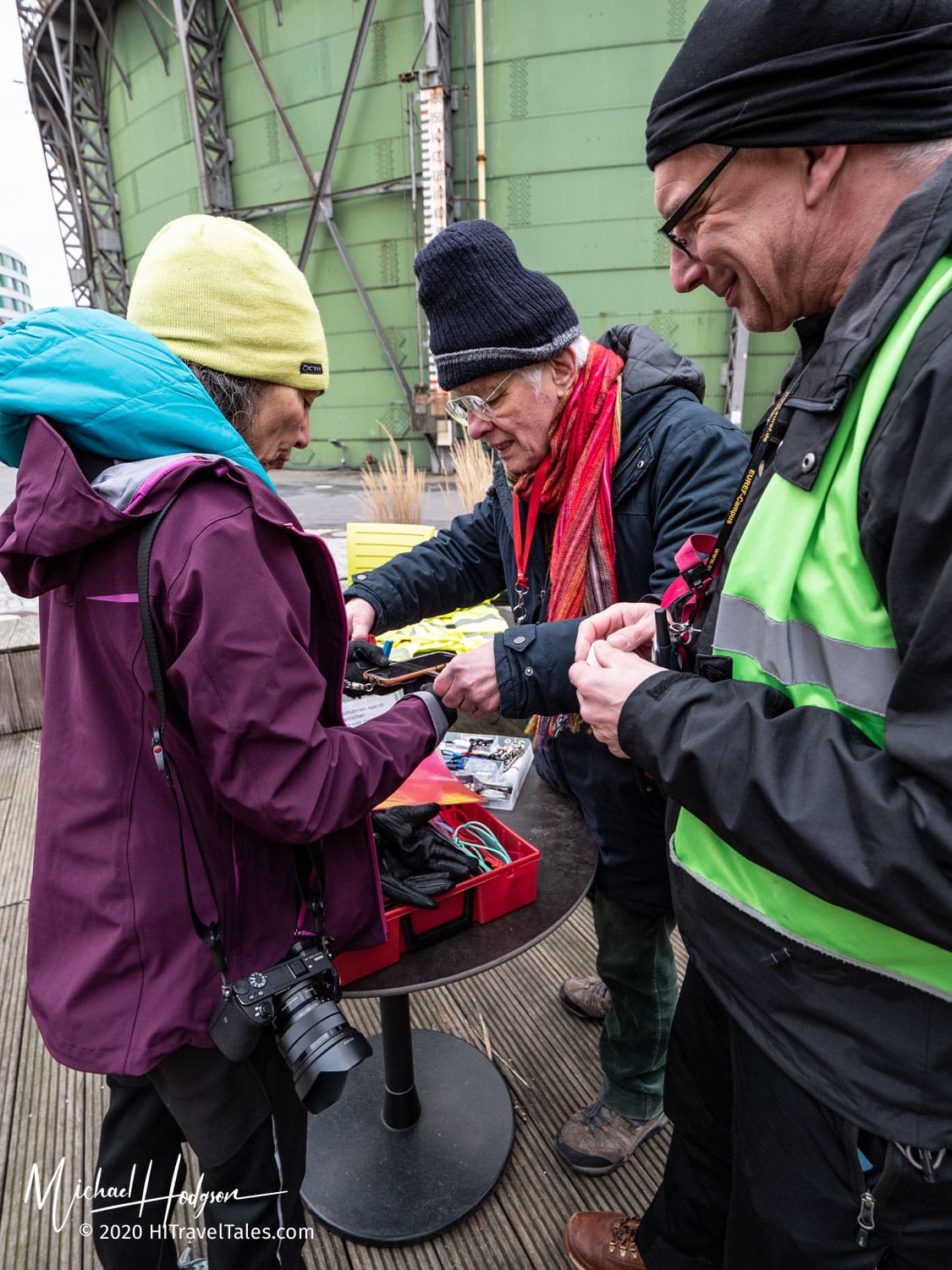 Guide Sascha wraps a length of clear tape around Therese’s mobile phone and case to ensure the phone stays in the case; guide Christian looks on. No packs are allowed. All cameras, mobile phones, or anything else must be secured to your body with a leash to prevent the possibility of something coming loose from above,  falling, and injuring anyone below. 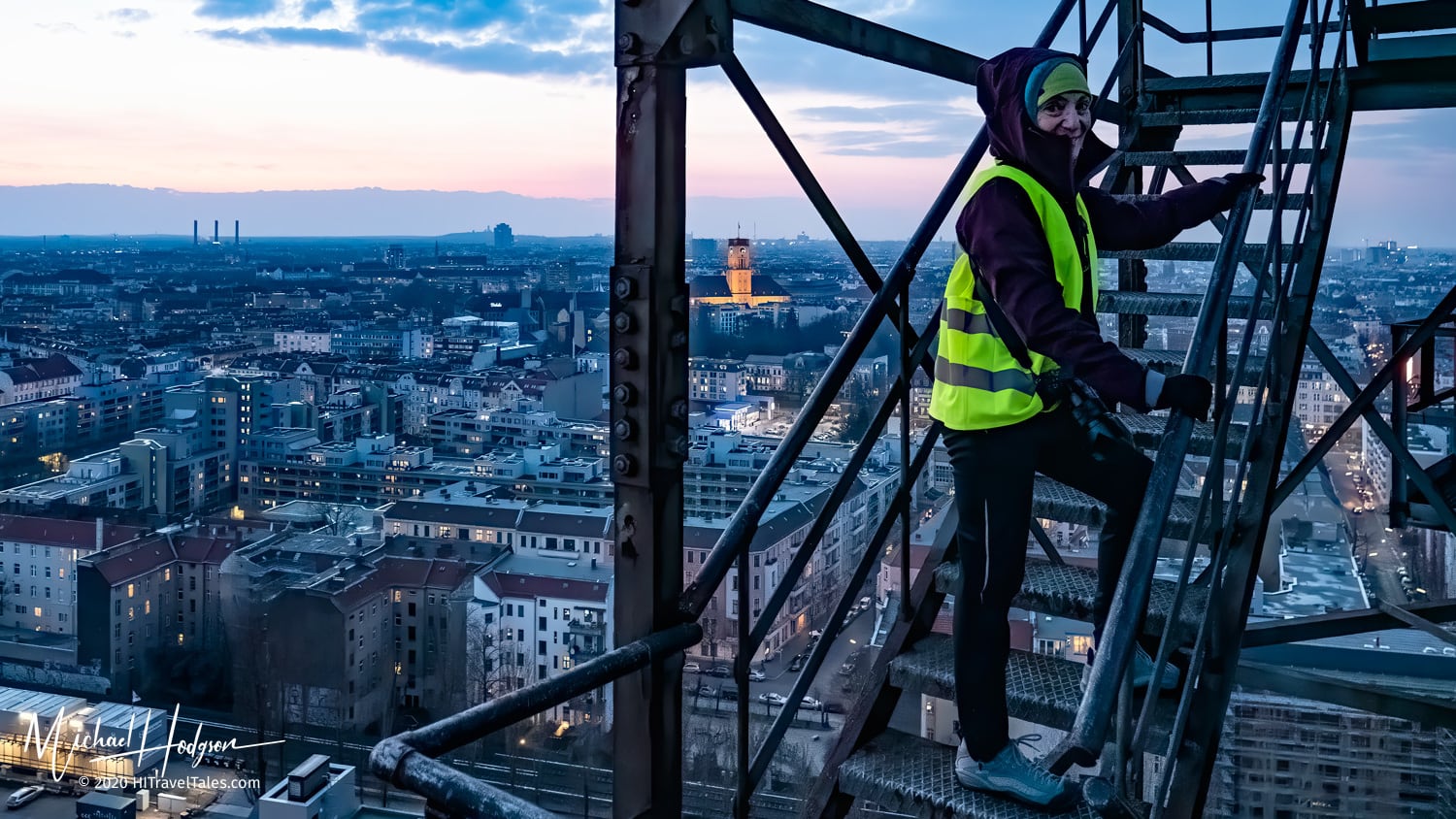 Therese climbing up and up and up the steel grated stairs of the gasometer as she heads toward the top catwalk and the most amazing views of Berlin. 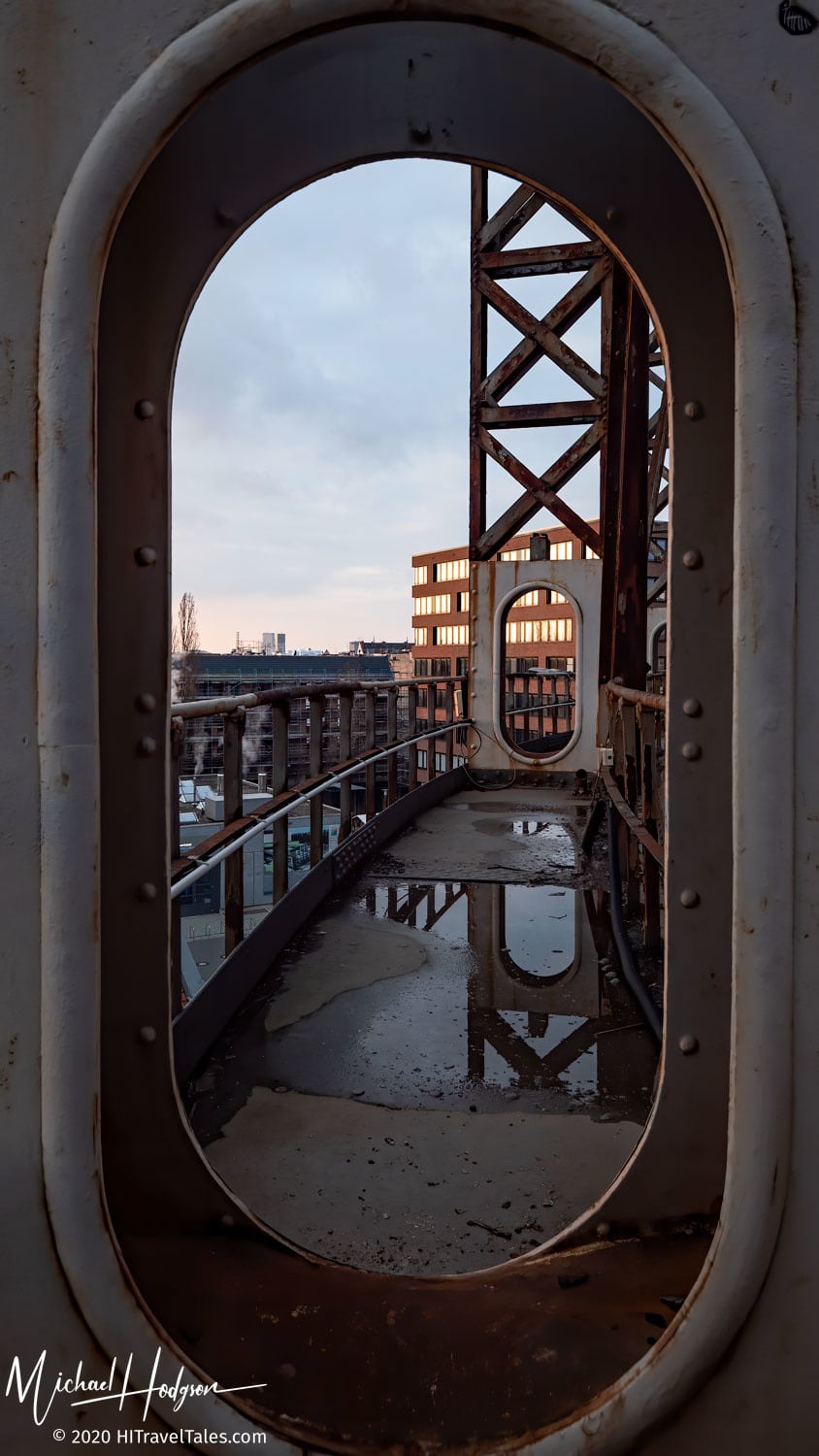 Spaces, some passages, and the catwalks themselves are narrow on the gasometer, which is a main reason no backpacks are allowed – and those with dramatic fear of heights may not want to climb the structure. 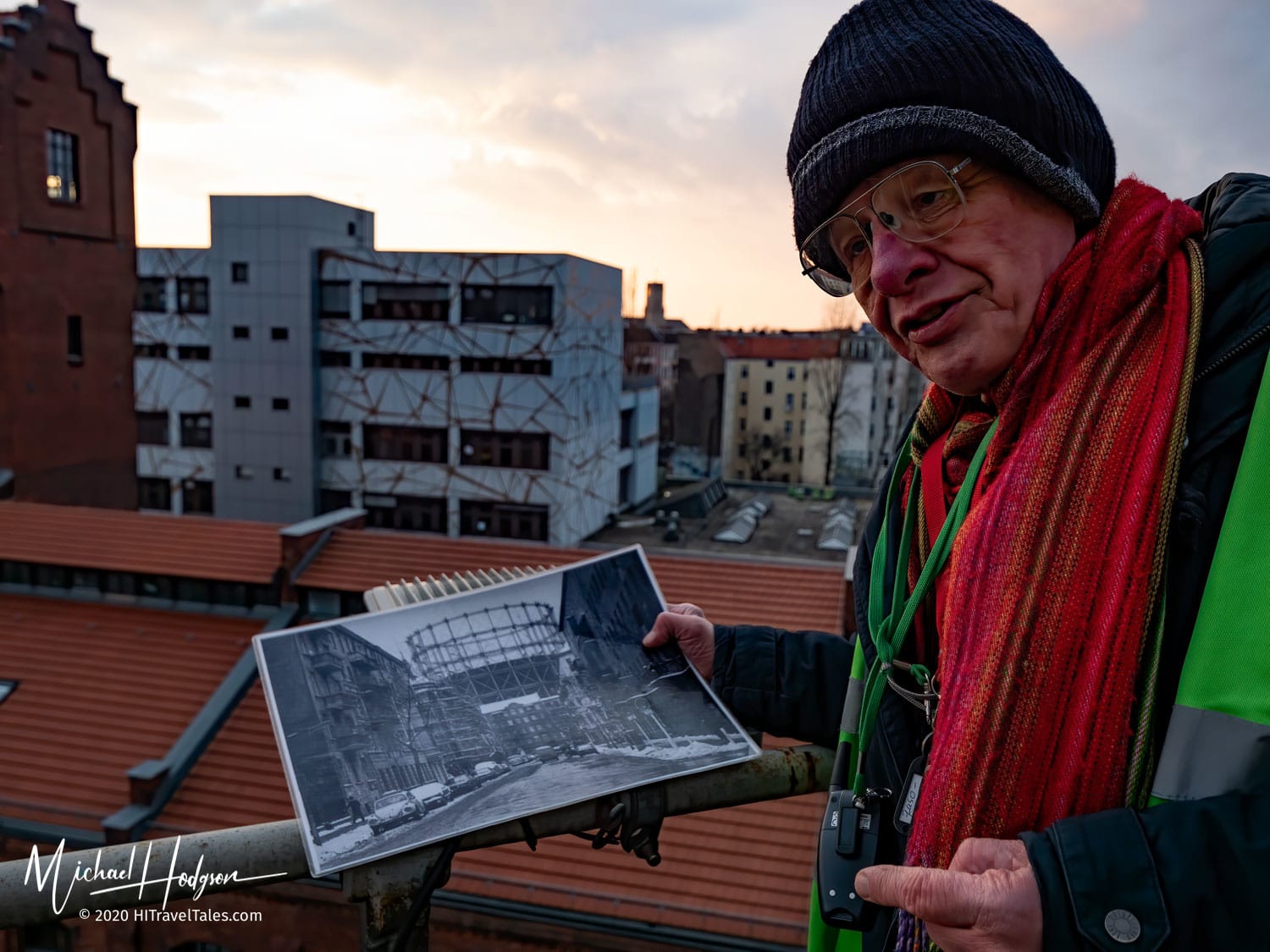 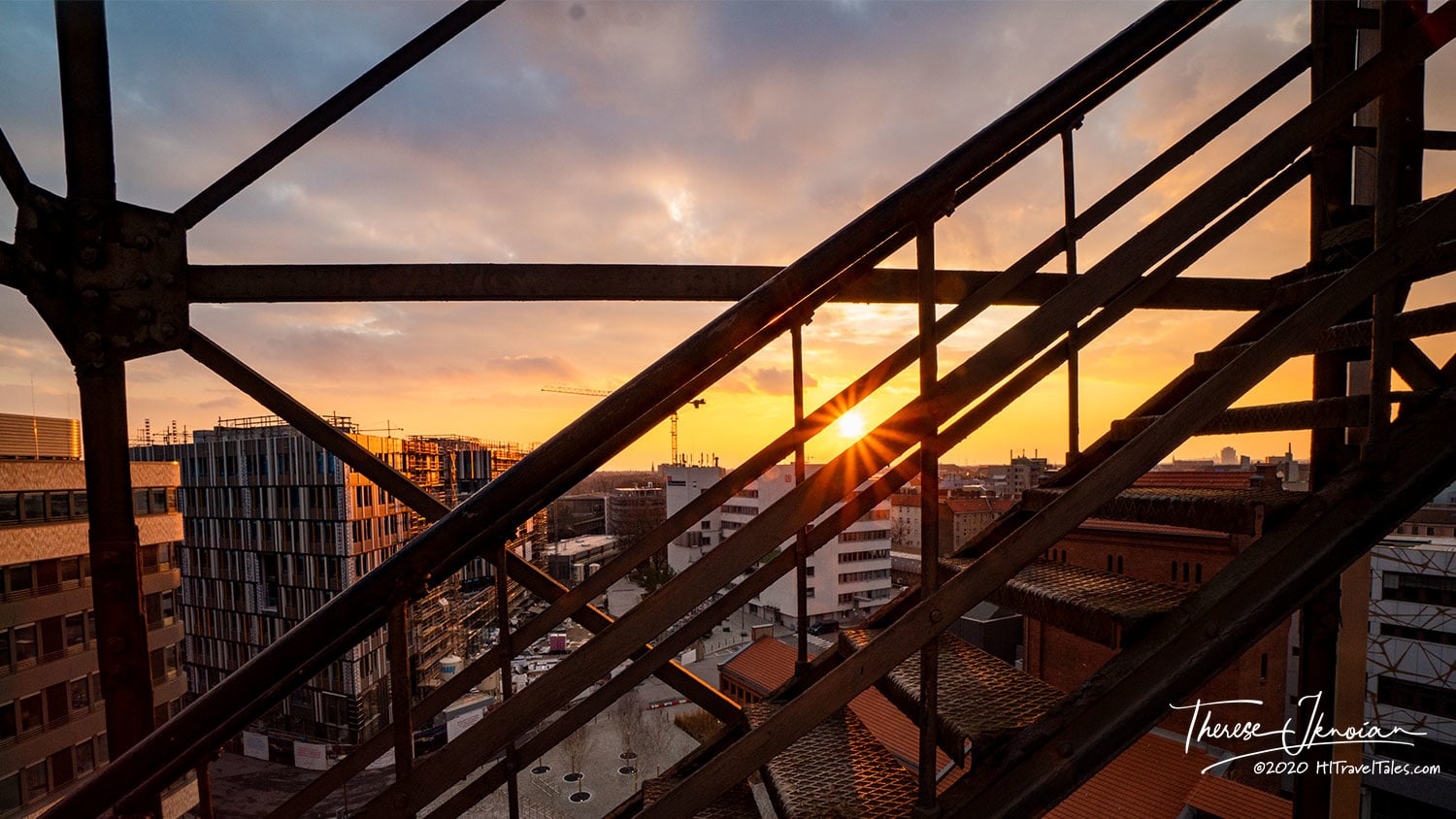 There is no bad view anywhere from the gasometer. Here, on our sunset tour, Therese captures a starburst during sunset while climbing the stairs. 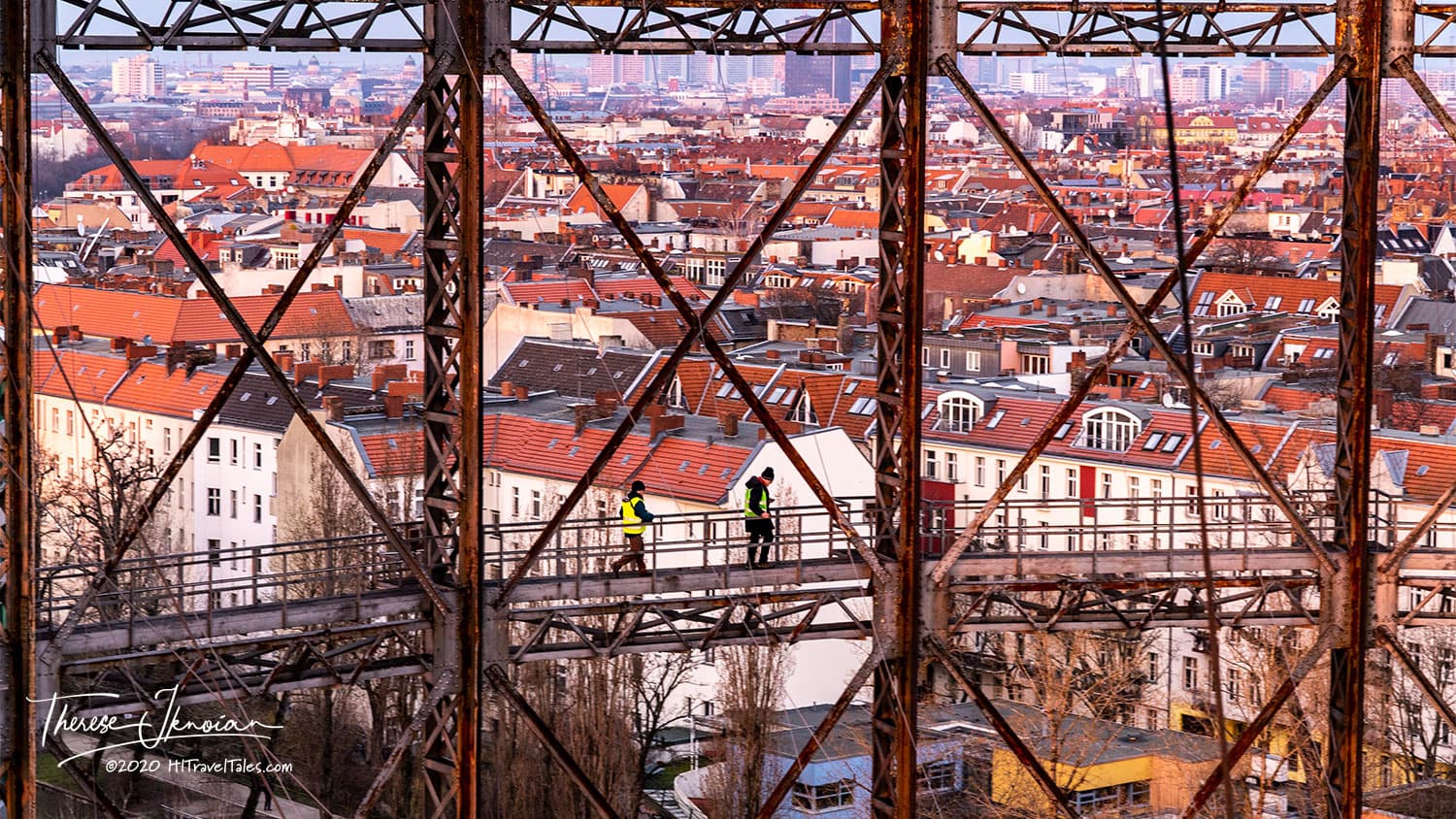 Michael and Sascha walk along a catwalk on the east side of the gasometer, looking for a view to shoot back toward the main group at sunset to the west, where Therese took this shot as she walked with the main group.

Climbing up the stairs between the catwalks on the gasometer as the sun begins to set. 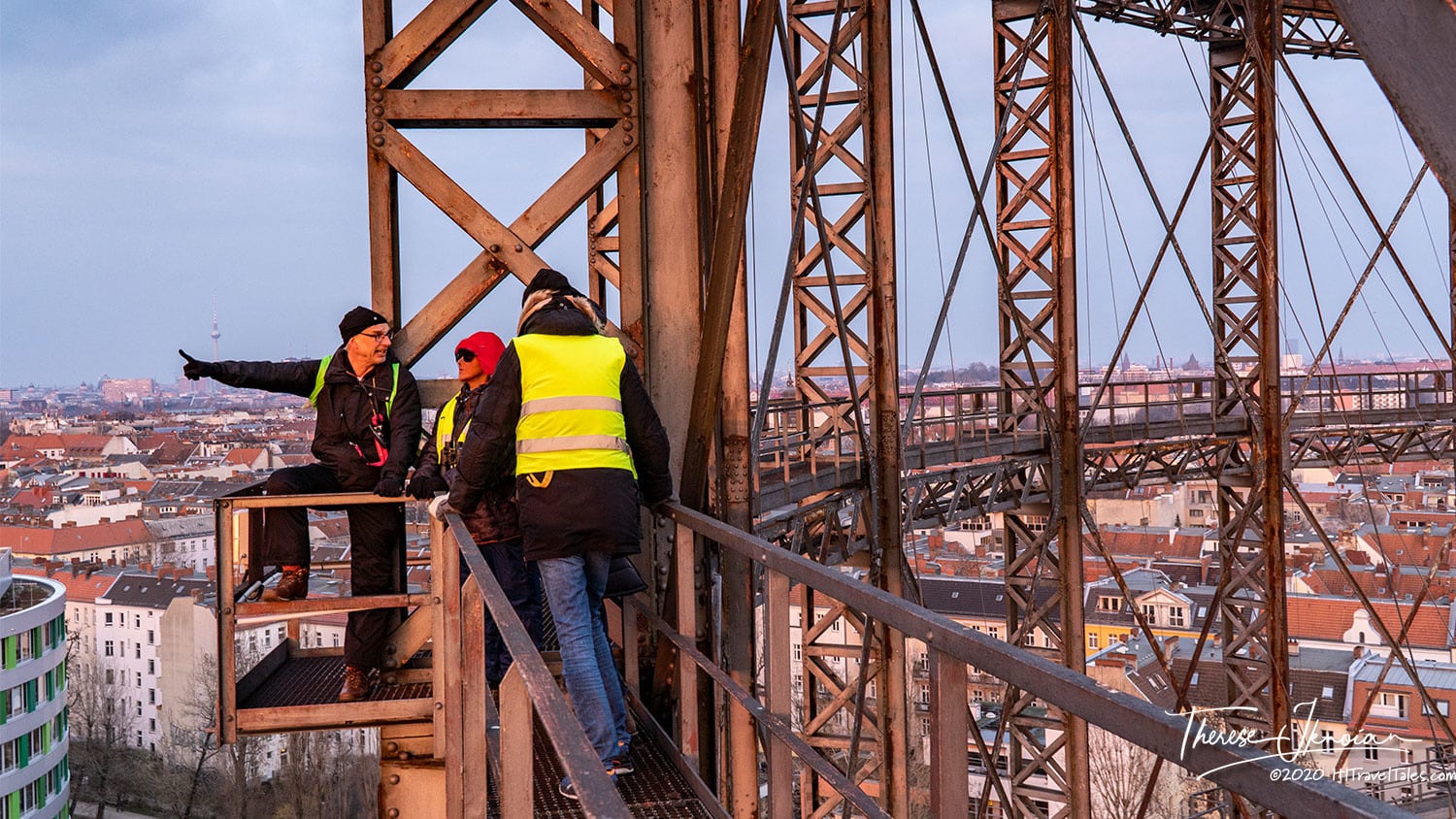 Christian, one of about a dozen tour guides, points out landmarks to the main group — note a few clinging to the rails. 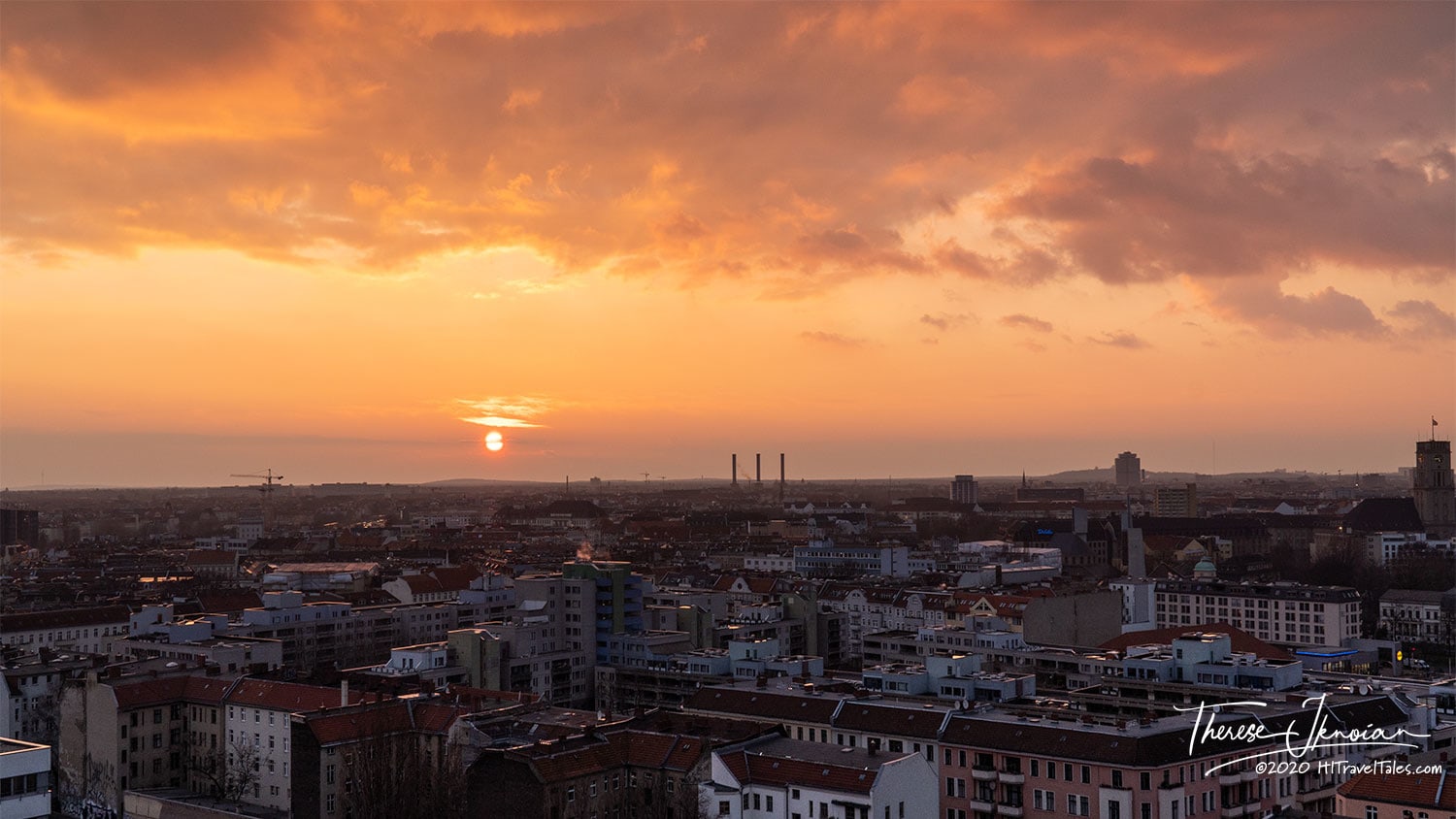 The sun sets over Berlin, painting the sky orange. Who can argue with these views of Berlin? 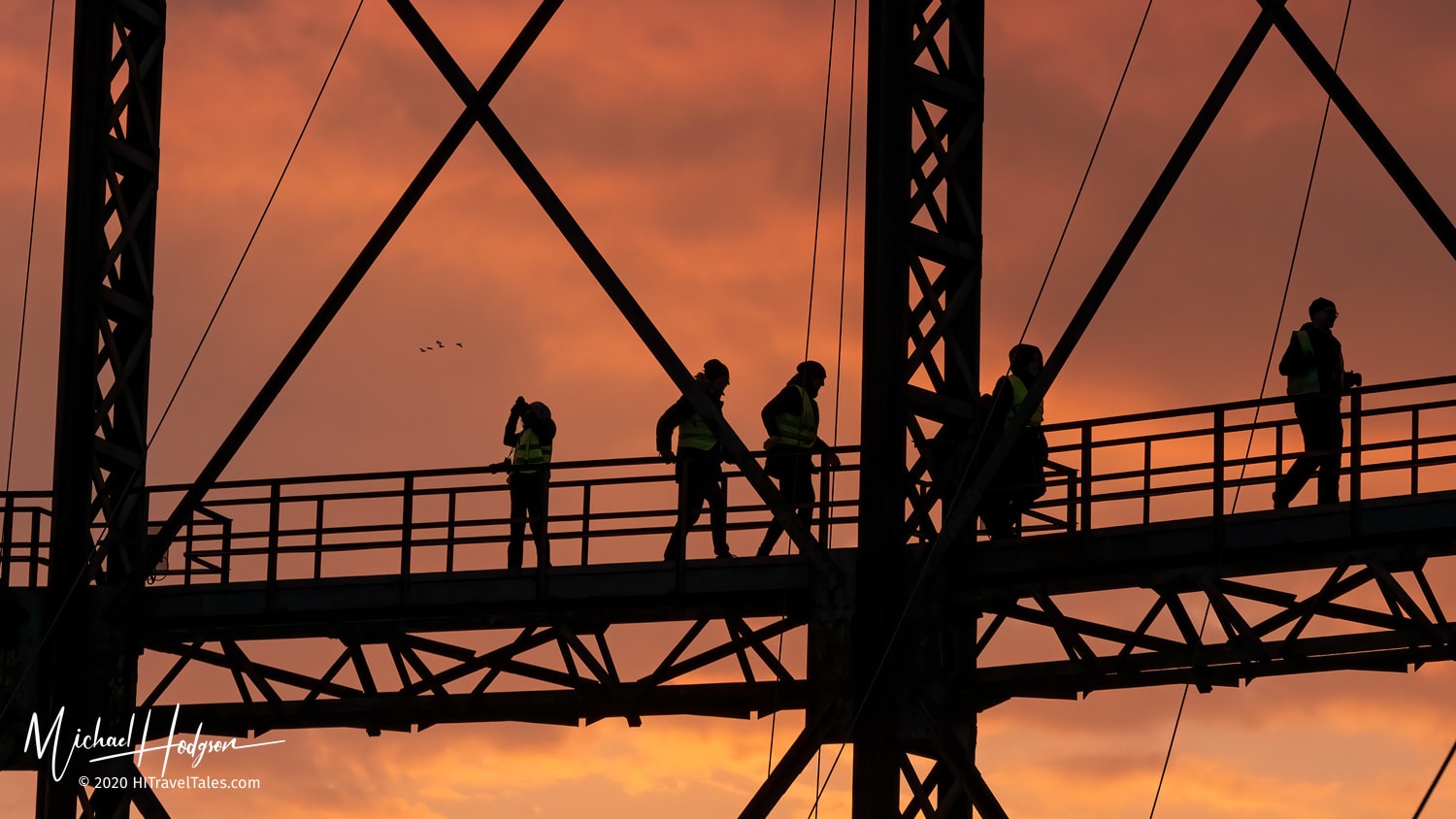 Silhouettes in the sunset on the catwalk of the gasometer. 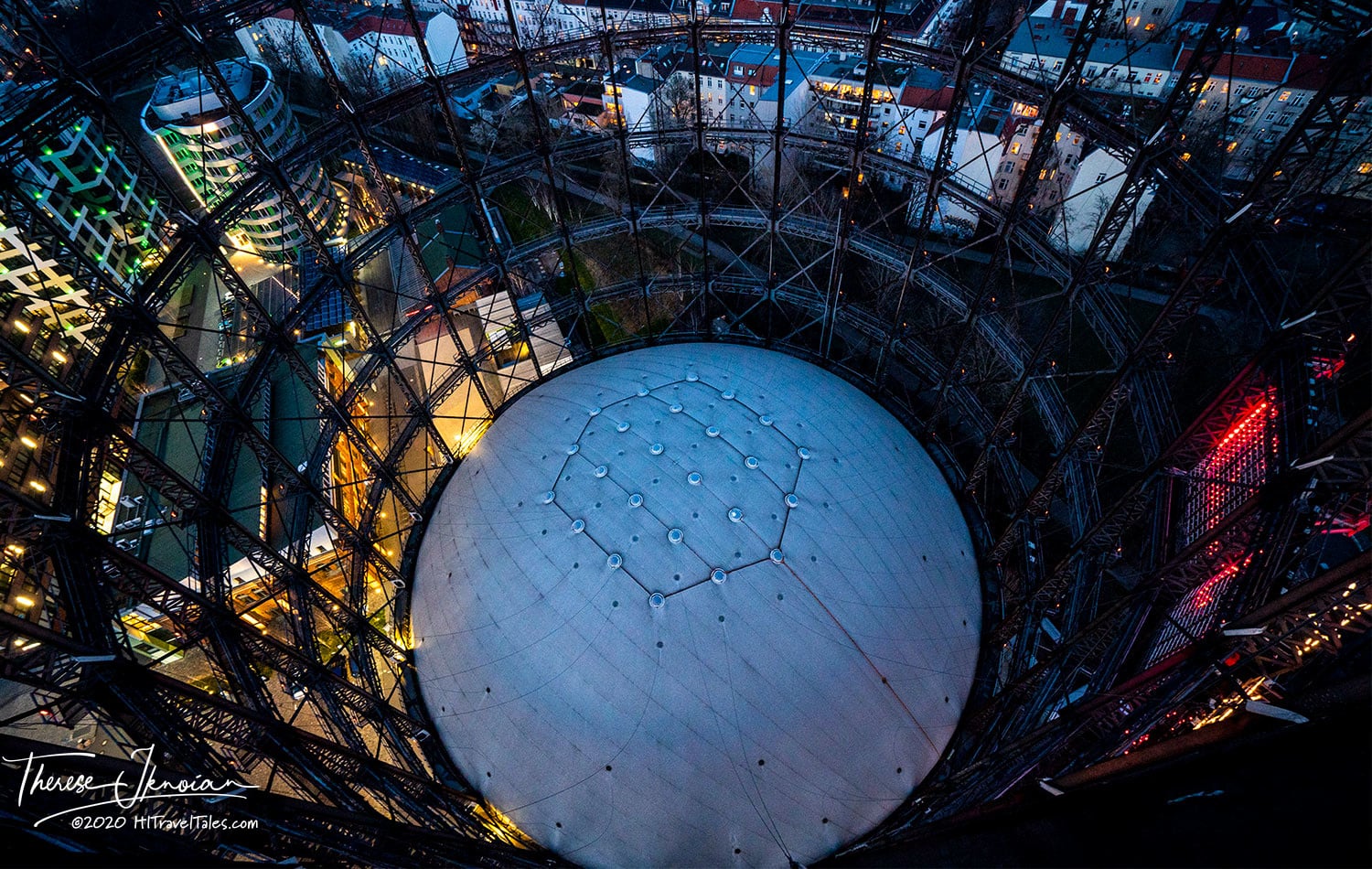 Peering down into the interior of the gasometer from the highest rung of the catwalks at 78 meters as Berlin’s lights illuminate the skyline. 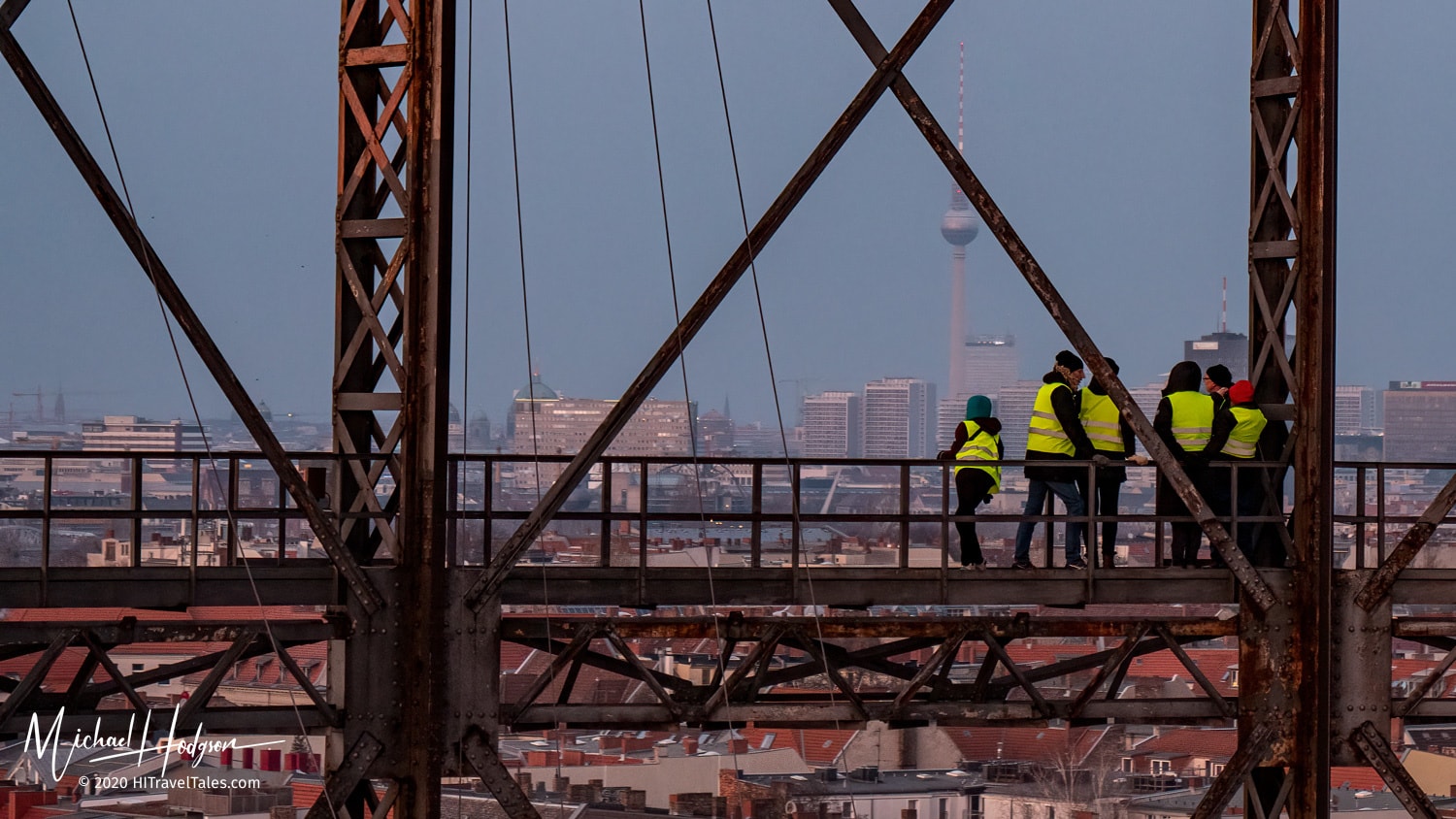 Enjoying the skyline views of  Berlin to the east. 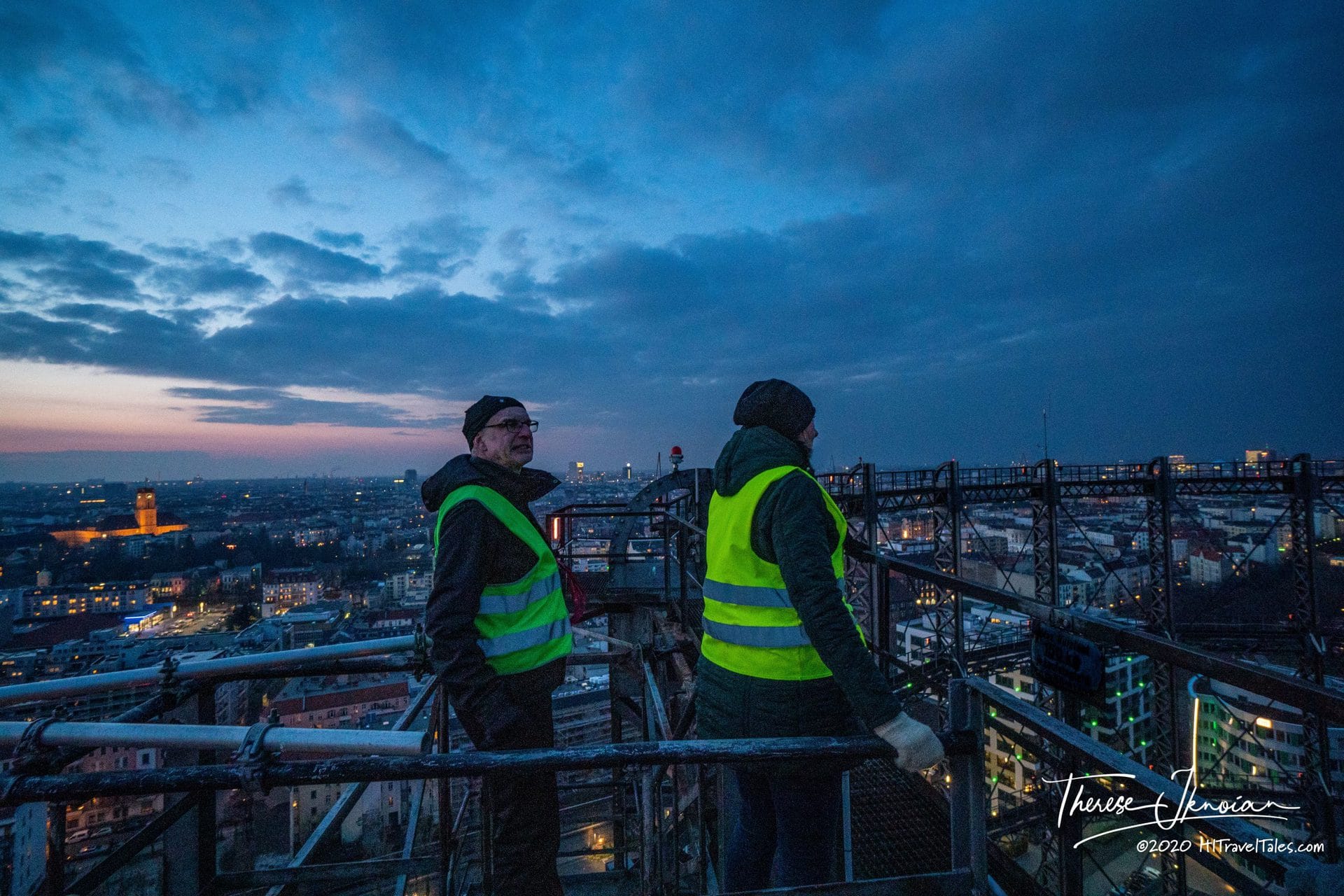 On top of the world. Standing on the very top catwalk of the Berlin gasometer just after sunset, looking out as the lights of Berlin twinkle below. 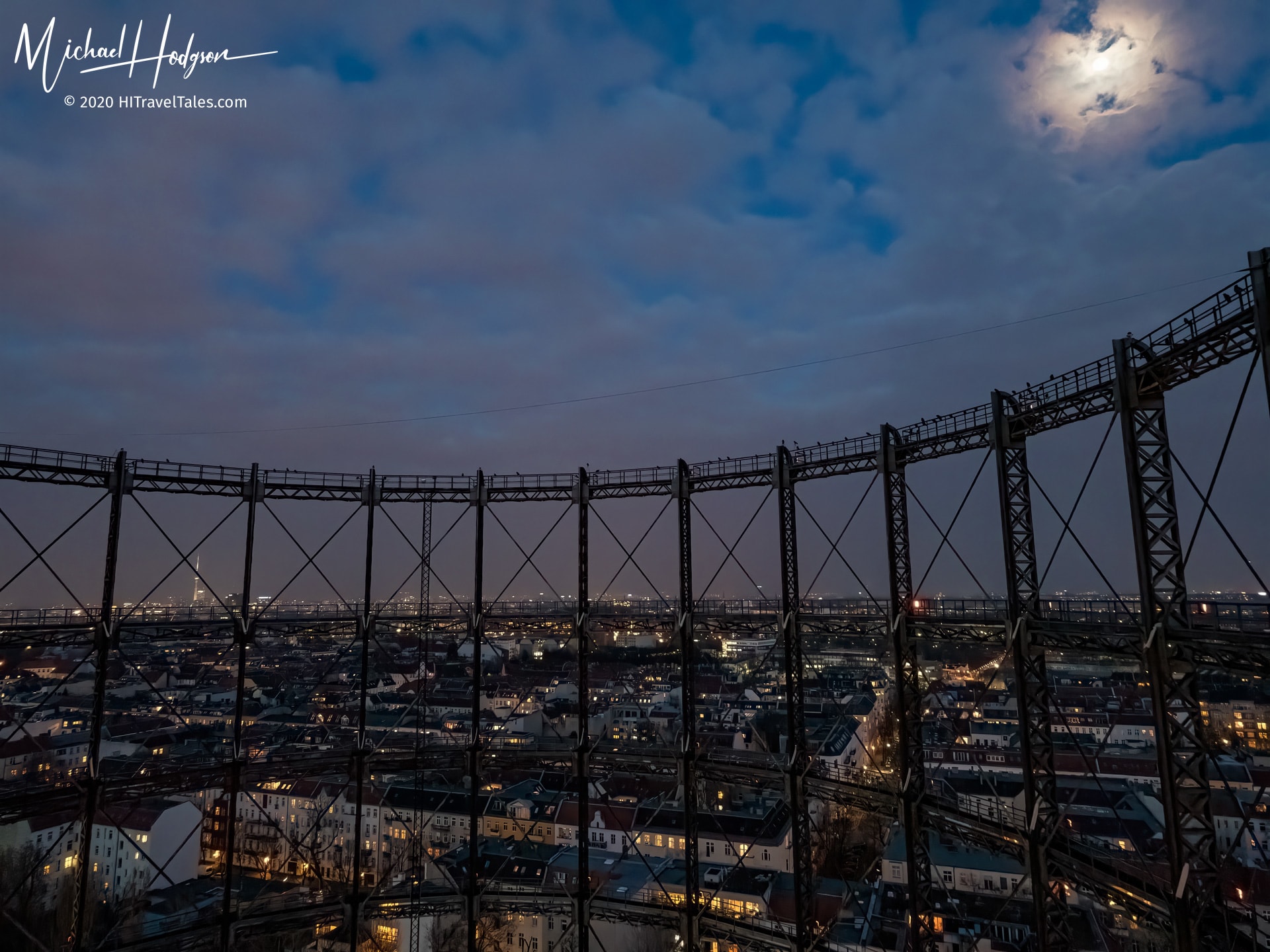 The light of a rising full moon casts a glow on the gasometer and Berlin below. Book a tour on a full moon for a special treat. 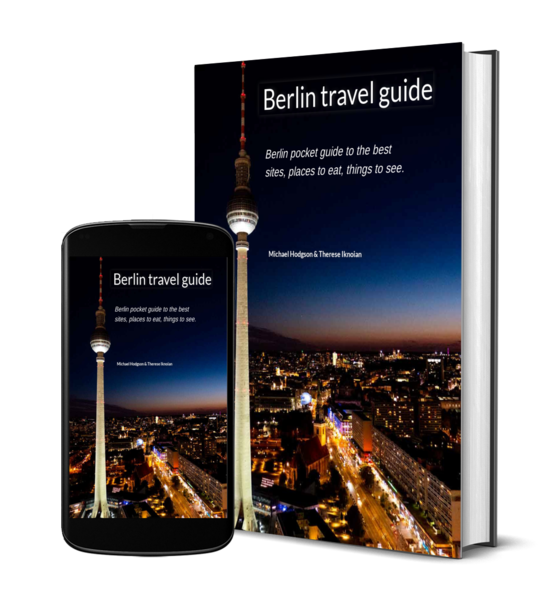 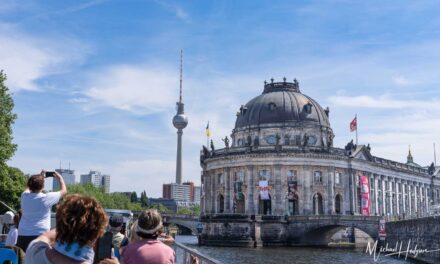 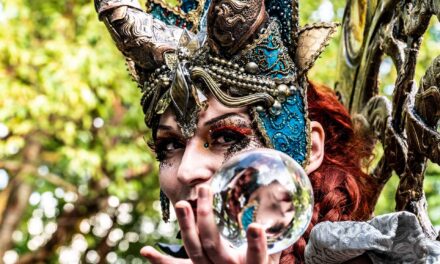