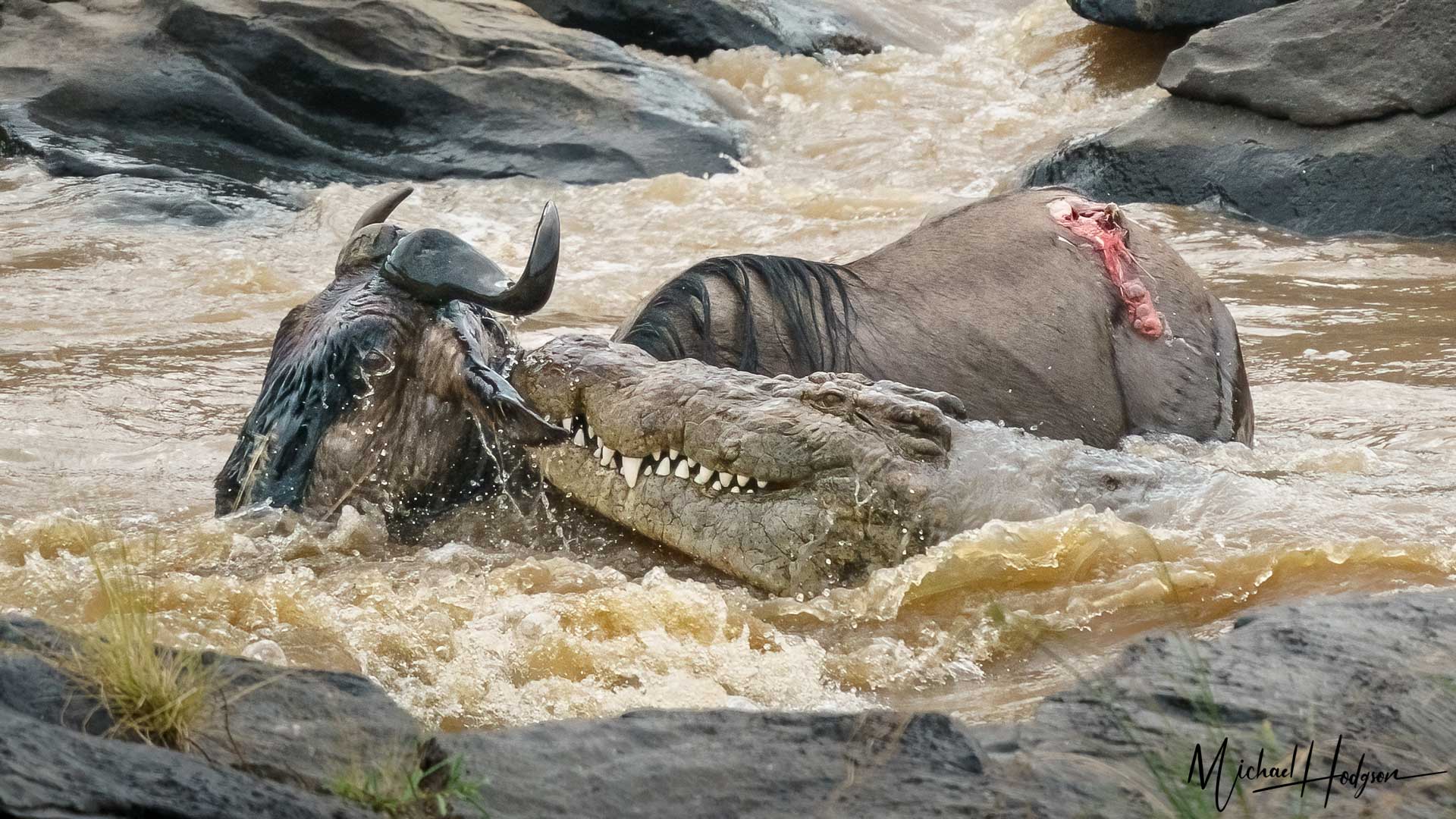 The Great Migration is considered the world’s largest migration of wildlife with over 2 million wildebeest, zebra and gazelles moving from Tanzania to Kenya each year. Nearly 250,000 wildebeest die during the migration, many to drowning and crocodile attack.

Being able to witness the Great Migration while on a photo safari in Kenya or Tanzania is considered one of the top wildlife viewing opportunities on the planet. Approximately 1.5 million wildebeest and another half-million zebras and gazelle travel from Serengeti National Park in Tanzania to the Maasai Mara National Reserve in Kenya every year between July and October. Along the journey, wildebeest must swim or wade across numerous rivers where many drown or become prey to a crocodile attack.

The potentially deadly river crossings along the Mara River in Kenya have become the stuff of legend. And Great Migration safaris give photographers and tourists fascinated with the wildlife spectacle an up-close look at the life and death struggle.

The death of a wildebeest feeds the river ecosystems

Wildebeest are not traveling from the Serengeti to the Maasai Mara to see the sights. The massive movement northward by millions of animals is triggered by the dry season as bodies of water in the Serengeti dry up, forcing wildebeest, zebras, and gazelles to move toward the Maasai Mara and the Mara River in Kenya.

Typically, depending of course on when the dry season begins, the height of the migration into the Maasai Mara happens in late August through September each year. During this time, the 583-square-miles of the Maasai Mara fill with massive herds of mooing wildebeest. Wildebeest herds stretching as far as the eye can see is quite something to behold both from the window of a safari jeep and from the air in a hot air balloon.

To get to the grass-filled savannah of the Maasai Mara requires wildebeest negotiate a dangerous crossing of the Mara River. Wildebeest have no natural leader of the herd. Which means migrating herds will often split up into smaller herds that travel along with and move into and out of the main herd. At a river crossing, these smaller herds often gather together into a larger mass of hooves and horns, pressing against the banks and edge of the river, moving up and down, until one or more wildebeest decide to make a go for it. And then herd mentality kicks in. Wildebeest surge down steep banks and into the Mara River. Dust kicks up. Water churns. Wildebeest pile in pressing the herd ahead of it into the water and, before long, each member of the herd is swimming for its life.

Many wildebeest succumb to drowning, as they slip and are trampled or pushed under water by their own herd. In fact, some estimates put the numbers at 50 drowned wildebeest for every one killed by a crocodile. These dead wildebeest will float down river and become food for crocodiles, hyenas, Marabou storks, and vultures. Fish feed on the rotting flesh. As the wildebeest bodies decompose (not a pleasant smell, I am sure) the dead bodies also provide vital nutrients for the river itself, keeping it healthy.

Crocodile attack during the Great Migration

I was fortunate to be able to join a photo safari to Kenya during the Great Migration, one organized by California Center for the Digital Arts. Our group was also fortunate that the trip occurred in August 2021, both at the height of the migration that year and during the COVID pandemic—the pandemic kept tourist numbers to a minimum. In a normal year, photo safari vehicles can pack so tightly along the river crossings it looks like a jeep migration, I was told.

During the two days we were photographing along the Mara River, we were able to witness several crocodile attacks. During one, the wildebeest managed to swim away, relatively unscathed and the crocodile went without a meal (photo above). The other attack, presented below, turned into a 15-minute battle as a wildebeest struggled to survive when a nearly 14-foot crocodile was intent on making it a meal. It was hard not to cheer for the wildebeest. And yet I think all of us in the jeep that afternoon knew what the outcome would be. It was both difficult and fascinating to watch, and part of the circle of life. 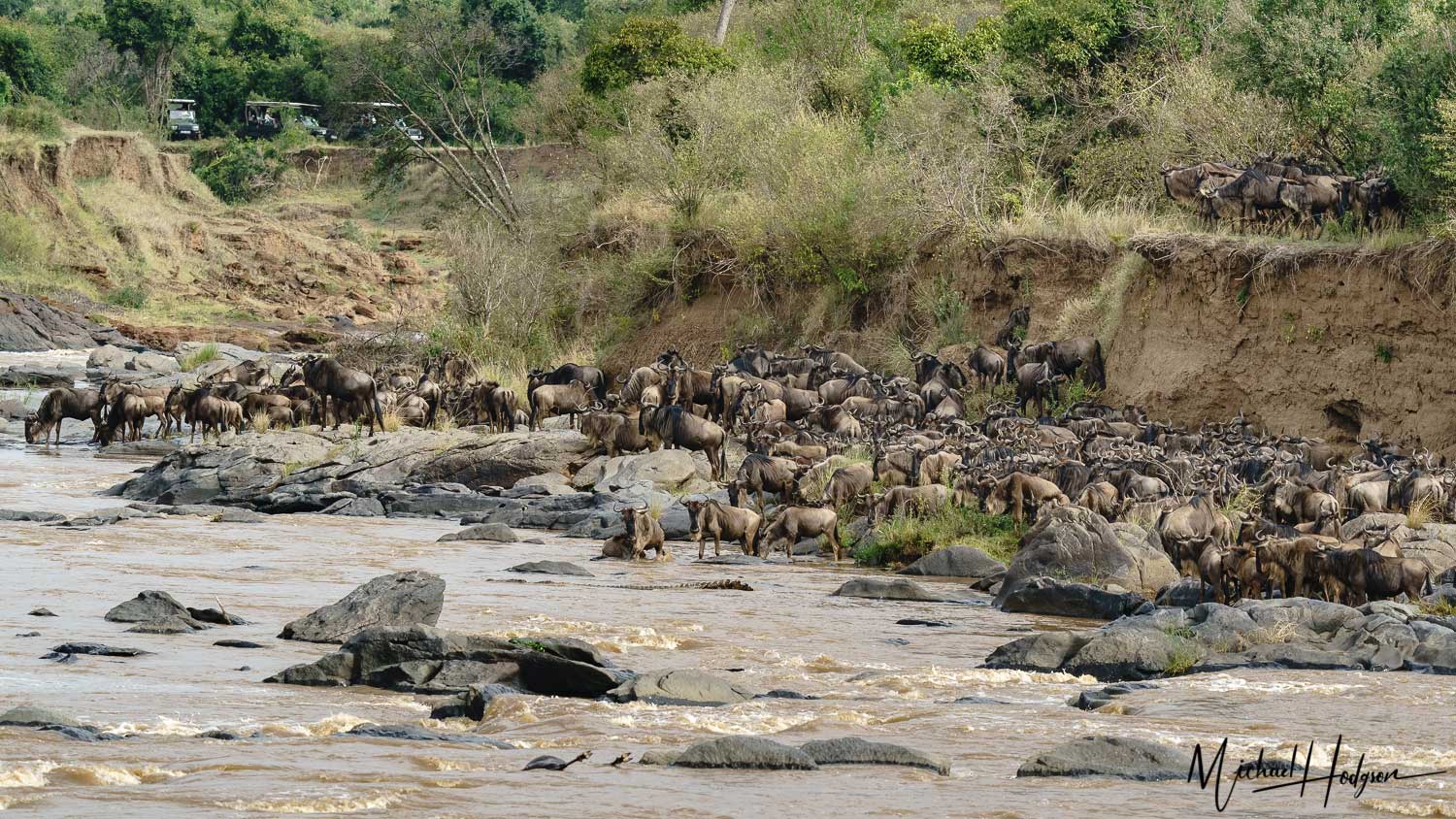 A herd of wildebeest press along the Mara River as a 14-foot crocodile lies in wait. Several notice the crocodile and step back, but others (in the back of the photo) are surging forward, seemingly unaware of the threat. Notice the hooves of a dead wildebeest in the foreground, likely drowned in a crossing attempt earlier in the day. 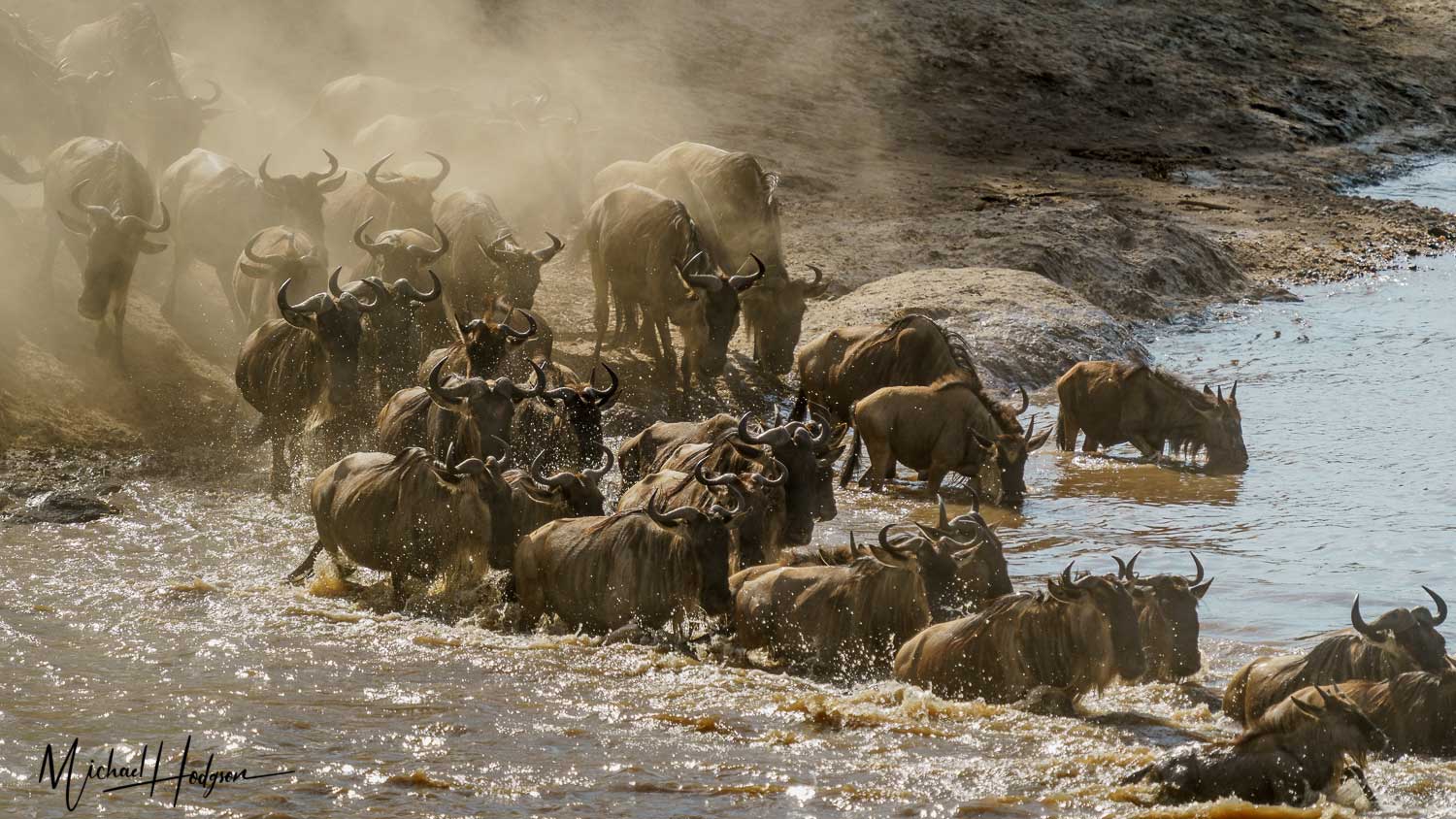 The herd decides to go, pushing other members of the herd into the water, swimming and plunging desperately for the other side. 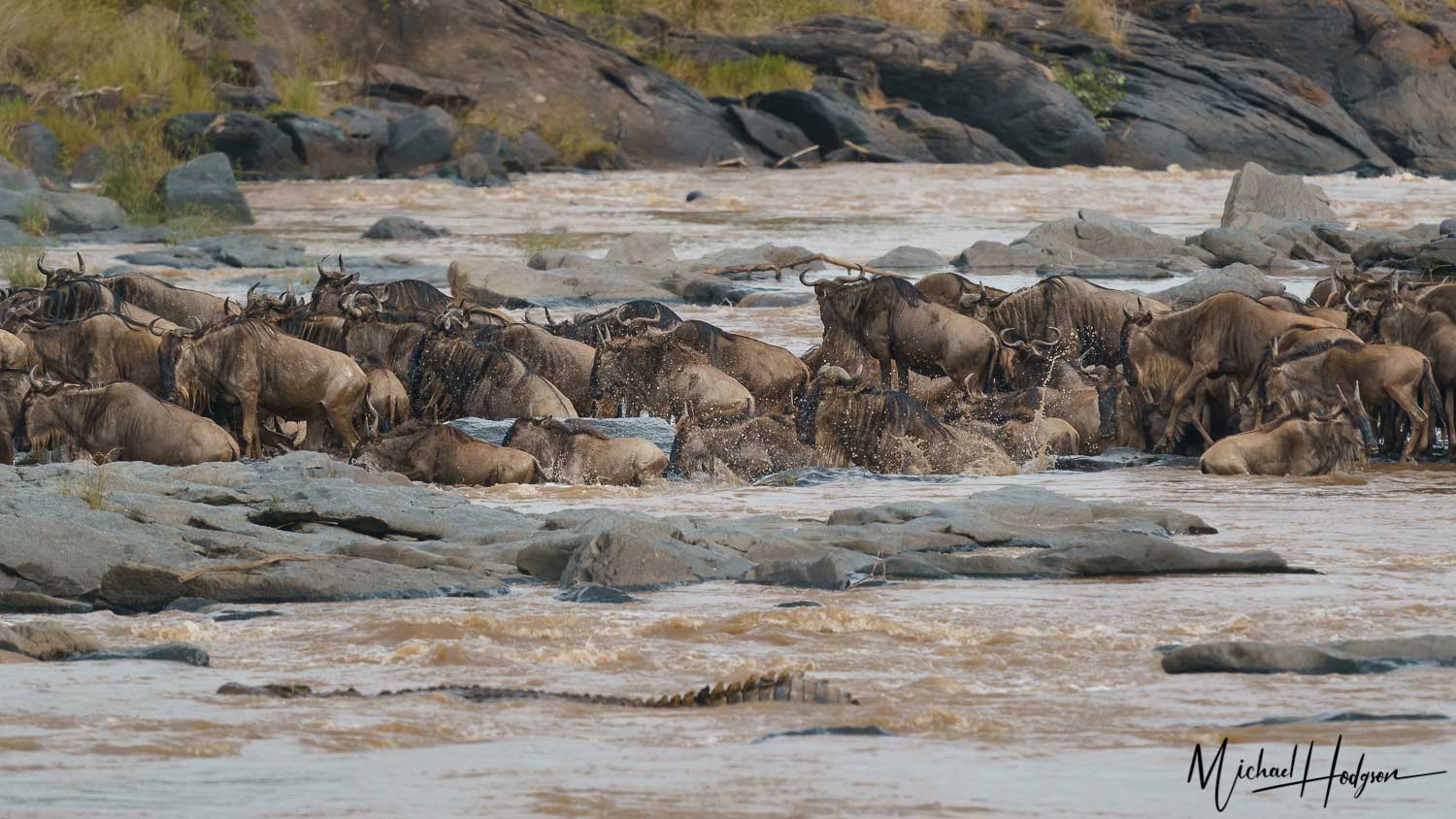 More of the herd fill the river as the crocodile heads toward the swimming wildebeest, deeper water, and a future meal. 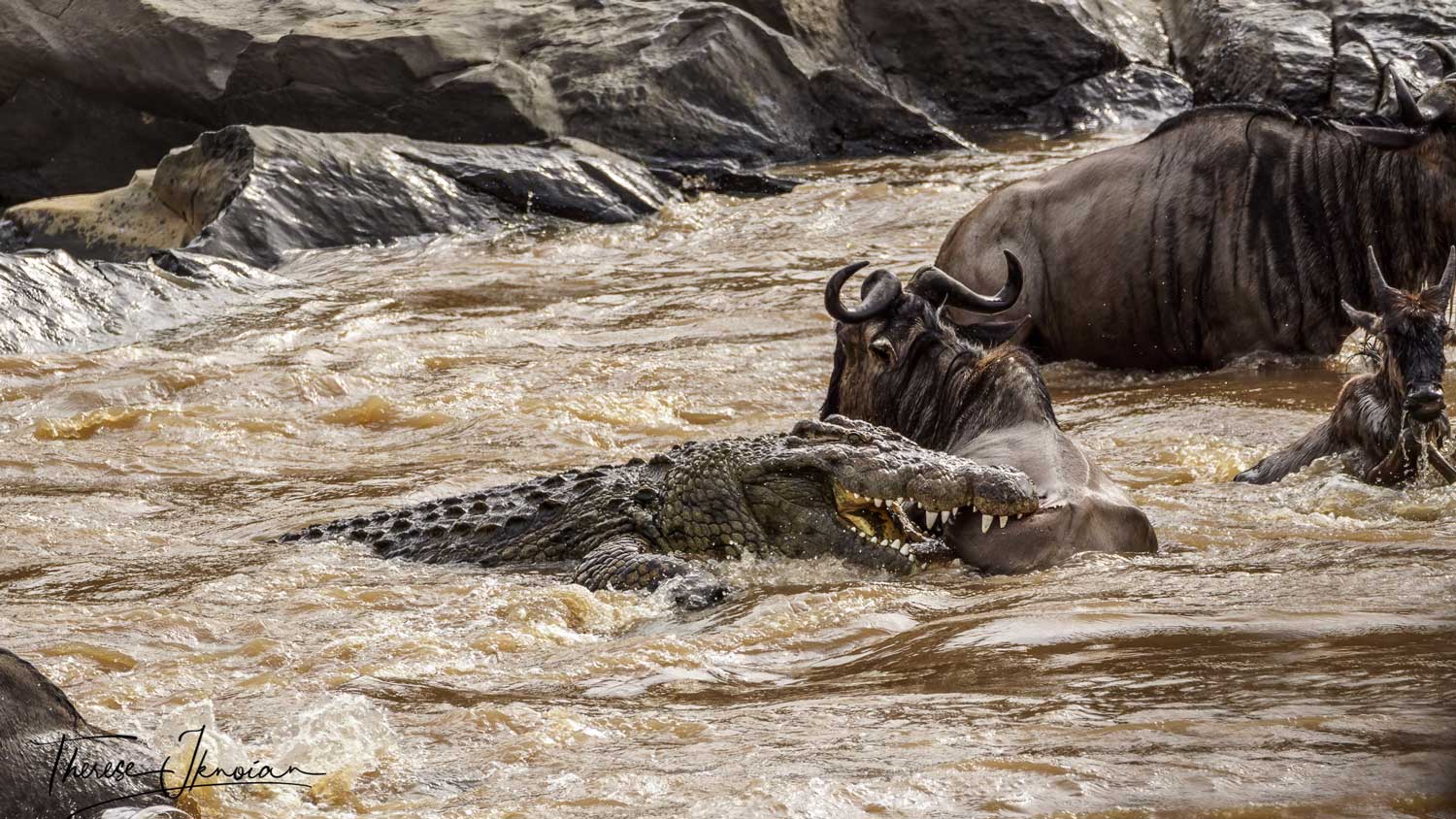 And then the crocodile attacks. I was photographing from a different vantage point to get the previous photos, but our driver noticed quickly what was going to happen and was rapidly driving us to a better viewpoint. During that short drive, the crocodile attacked. Therese Iknoian, my business partner and wife, was in another vehicle, positioned perfectly to capture the first moment of the attack as the huge crocodile launched out of the water and bit down into the hind quarters of a wildebeest. 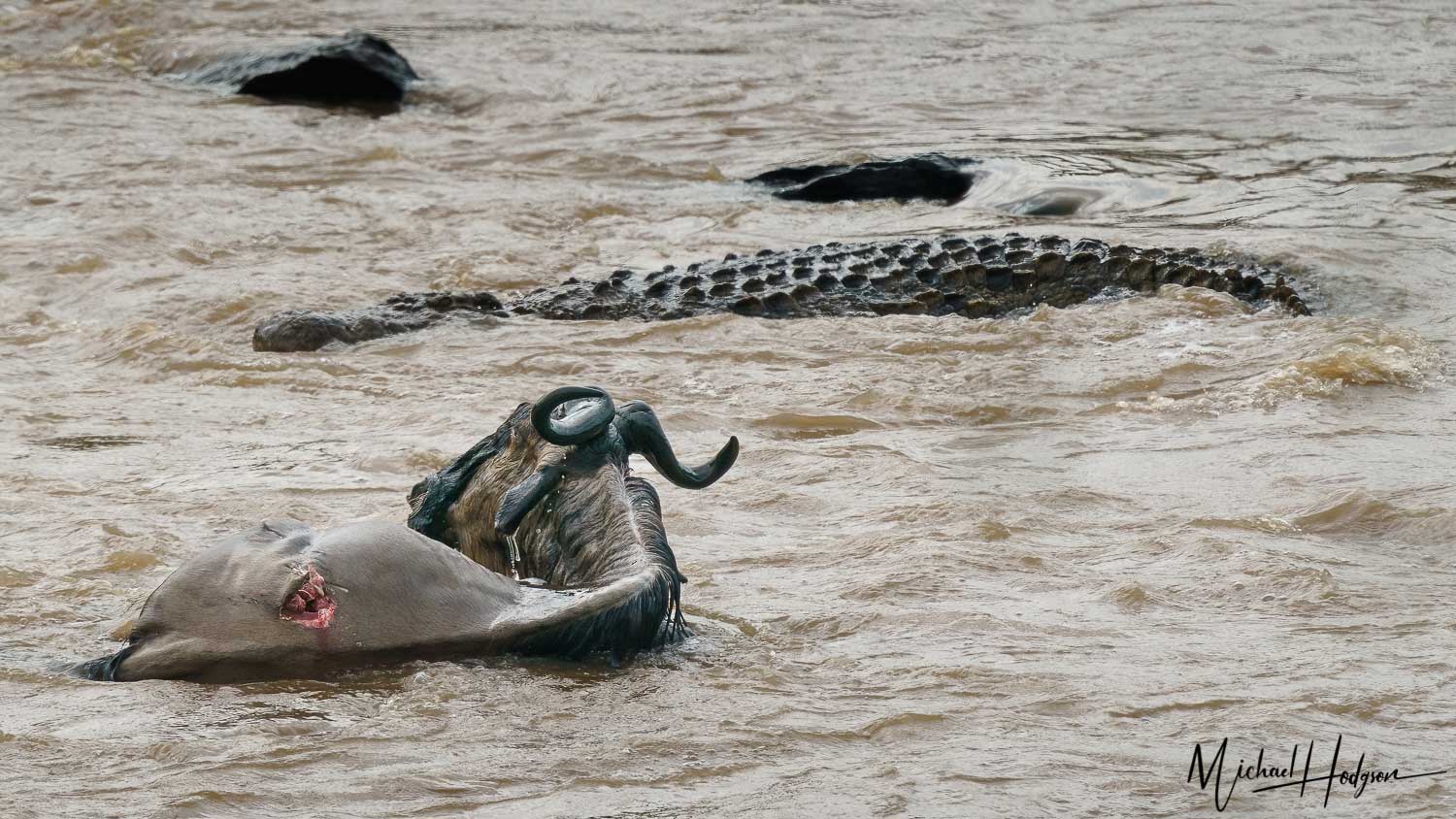 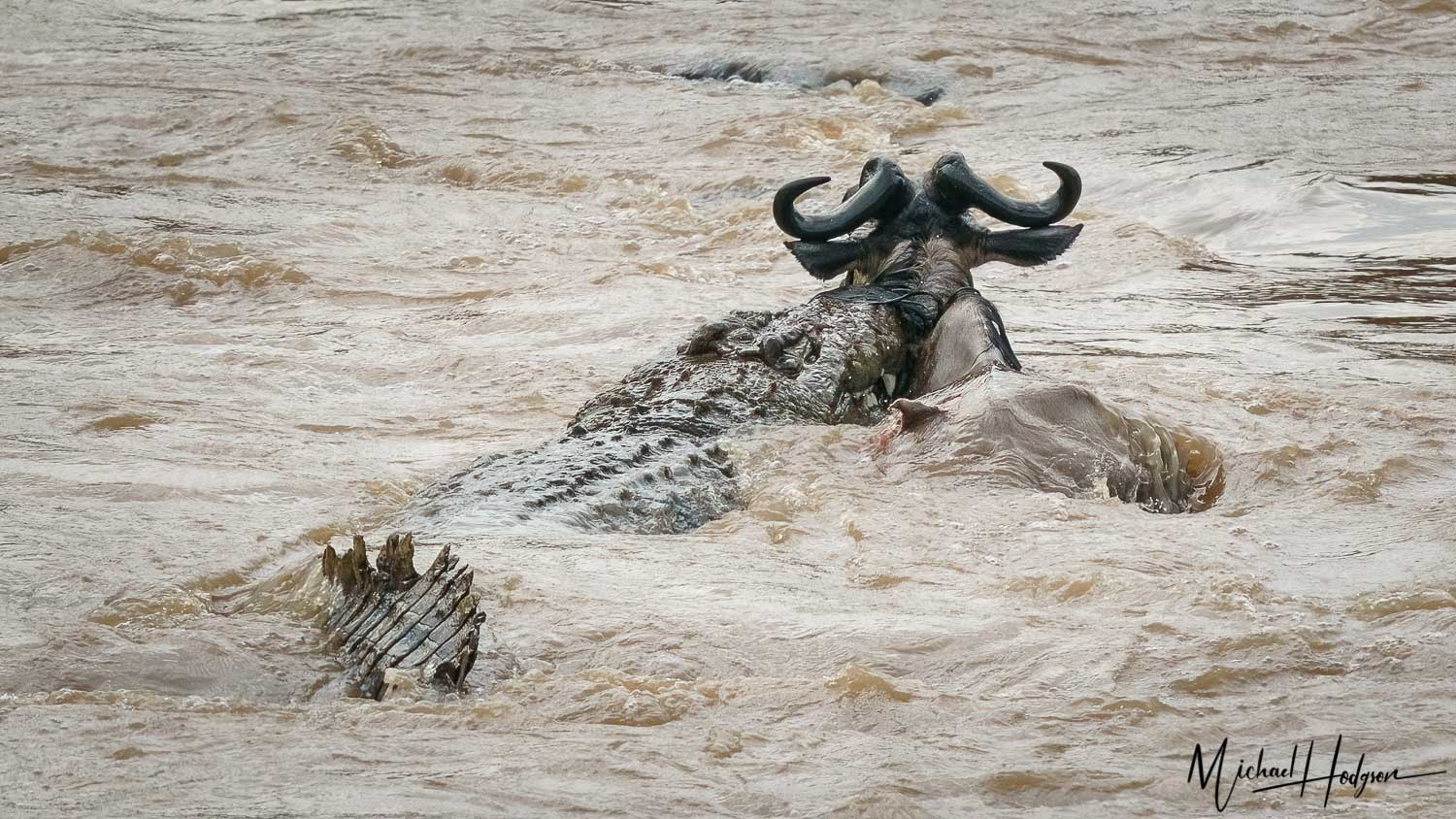 This time, the crocodile attacked the weakened wildebeest at the neck and swum with it toward deeper water. 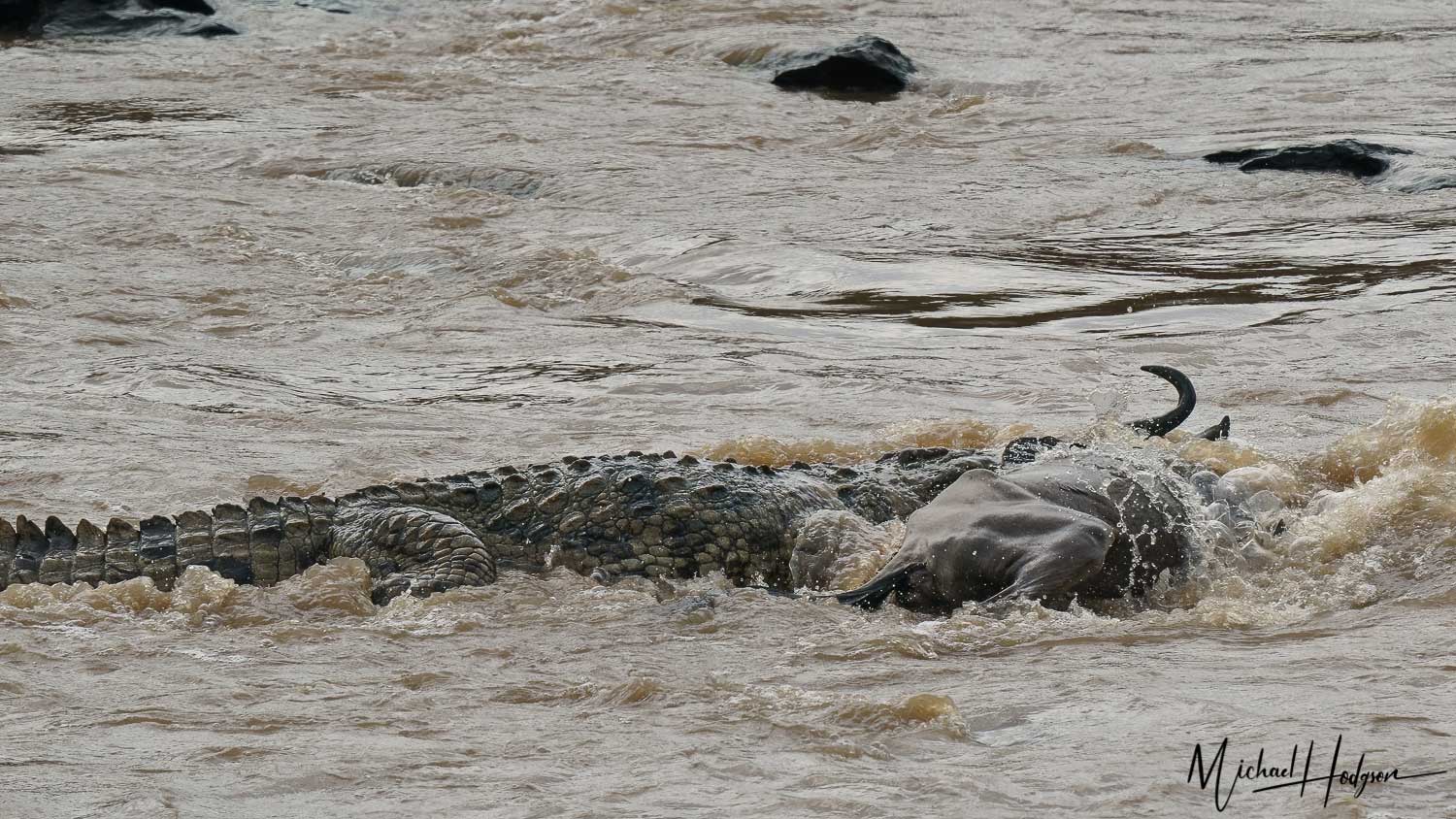 There, in the deeper water of the Mara River, it wrestled the wildebeest around, pulling its head repeatedly under water. 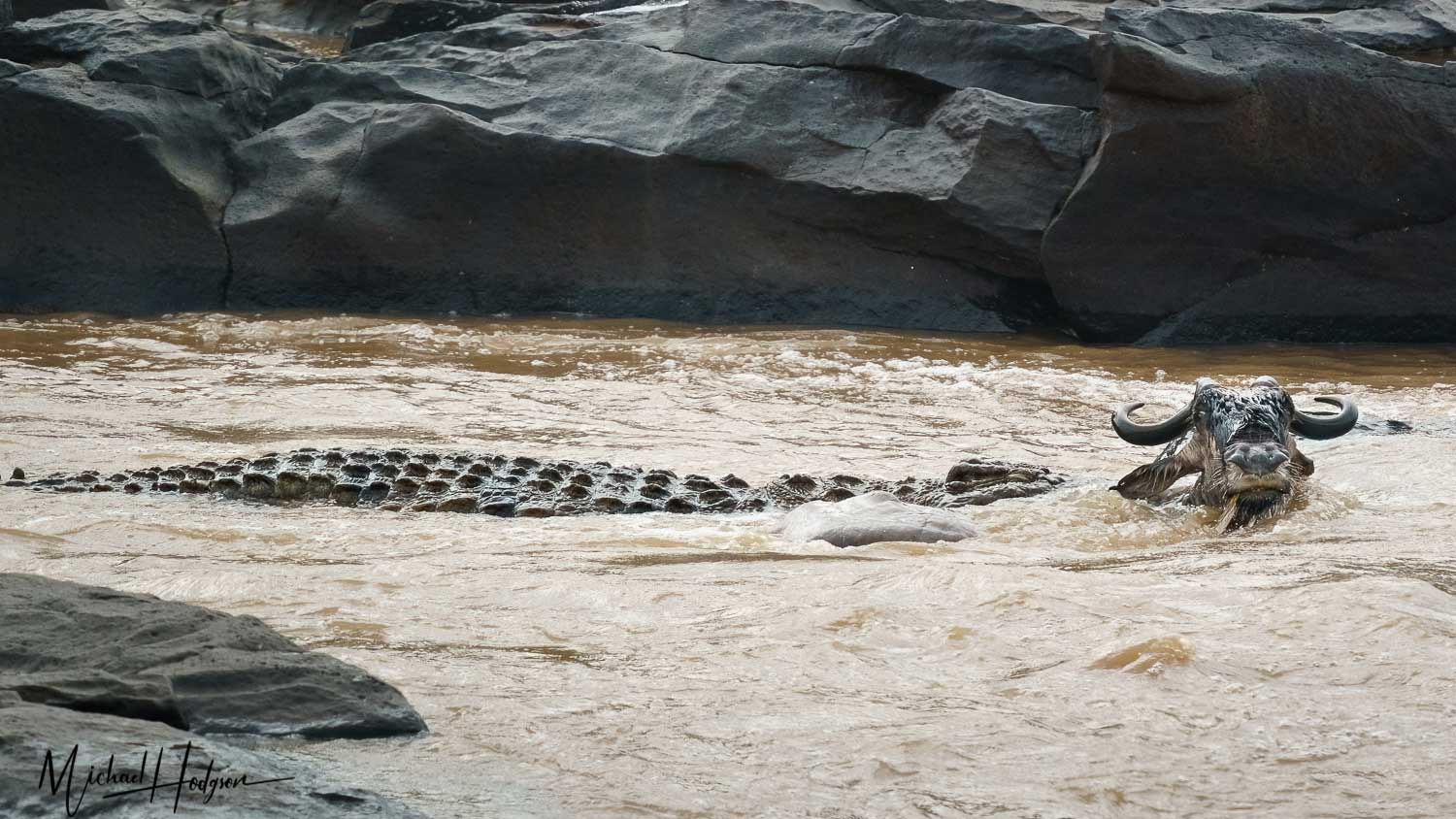 The wildebeest struggled and kept fighting to keep its head above water. 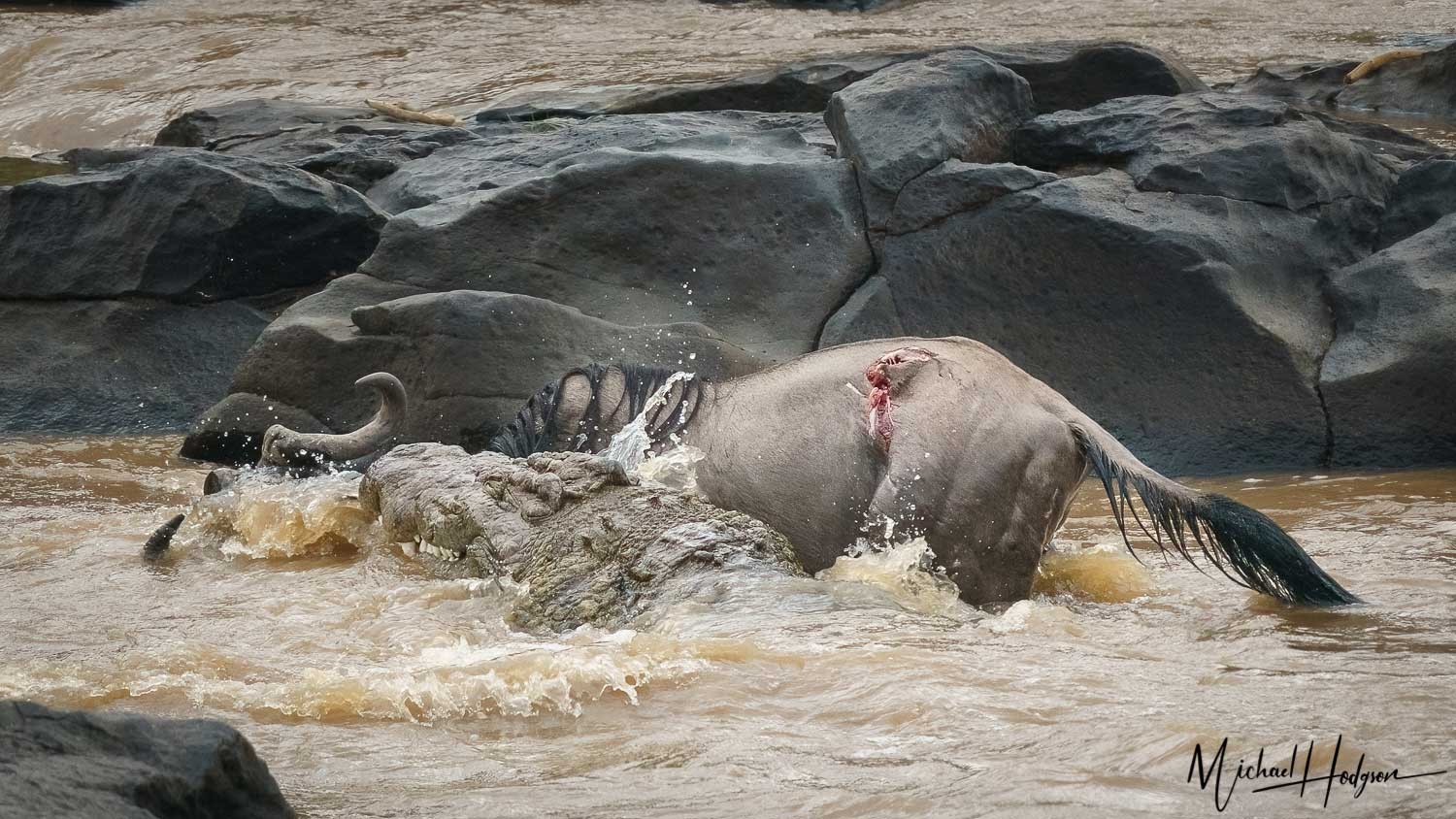 But the crocodile was relentless, slamming the wildebeest’s head and front quarters back into the water each time it tried to stand. 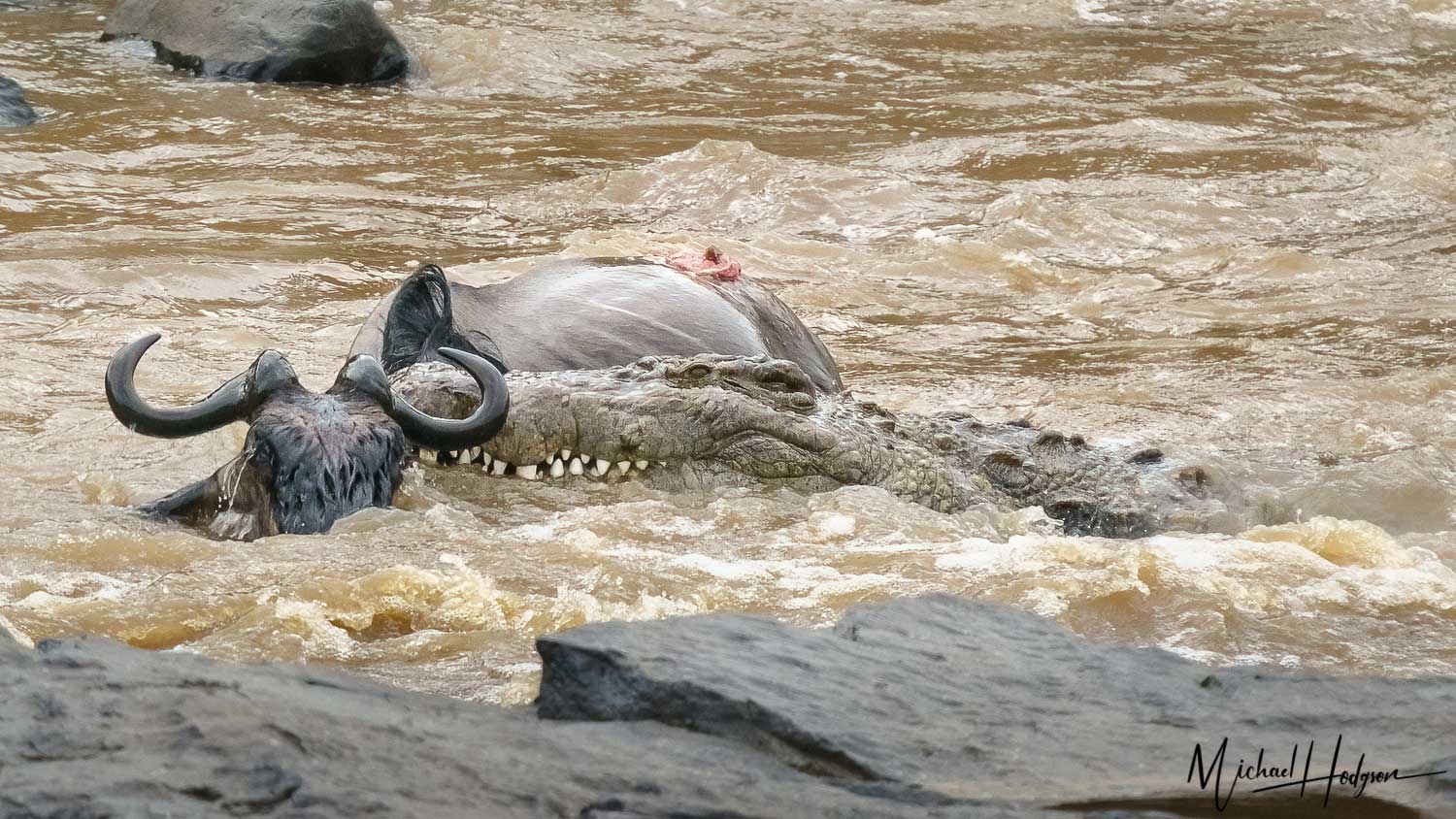 The crocodile dragged the weakened wildebeest’s head underwater one last time and held it there. The struggle was over. 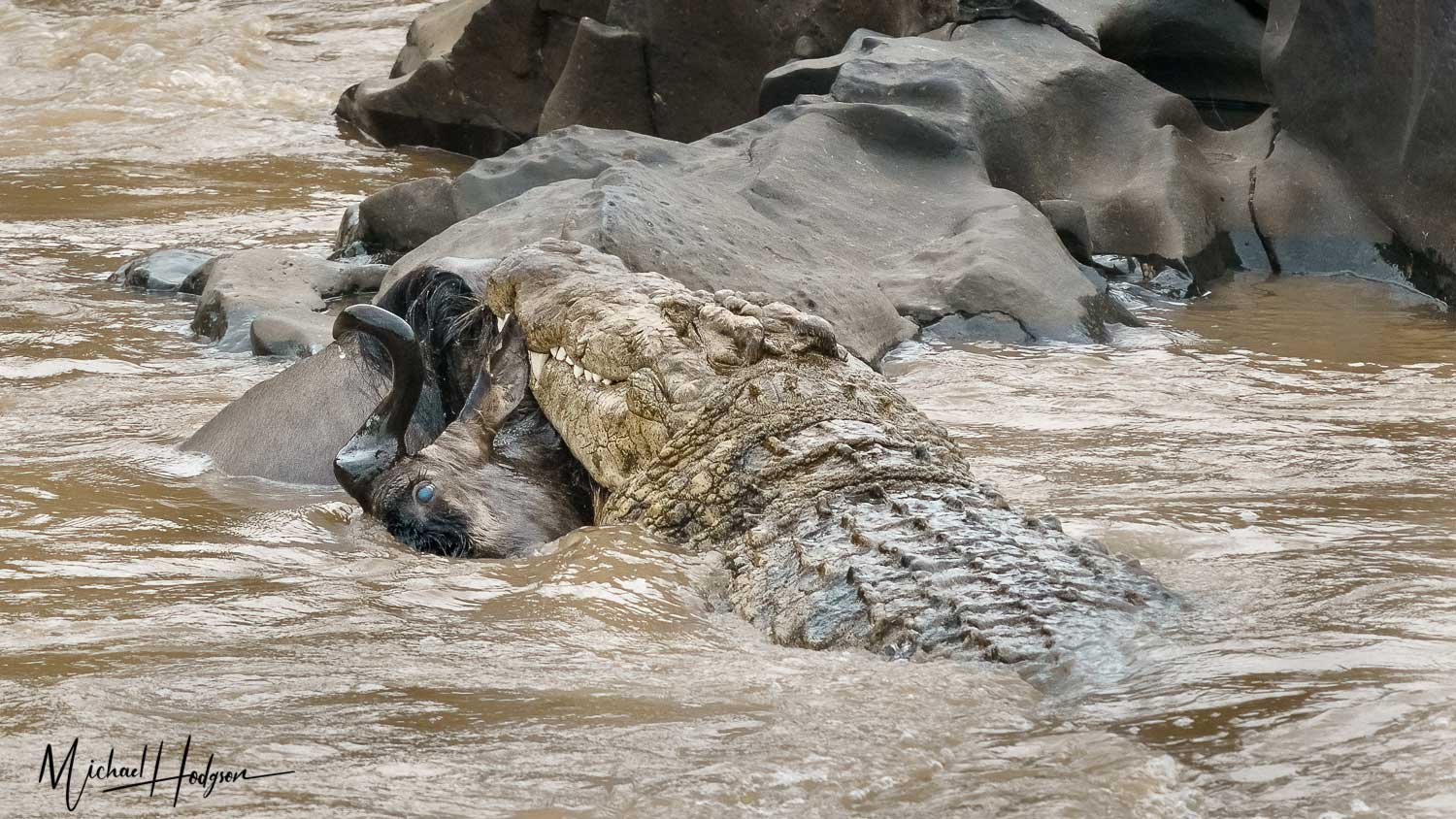 Pushing the carcass with its nose, the crocodile guided the dead wildebeest to the shore where it maneuvered to get a better grip on it, before swimming away to stow its meal for later. From start to finish, the battle between the wildebeest and the crocodile had lasted nearly 15 minutes. 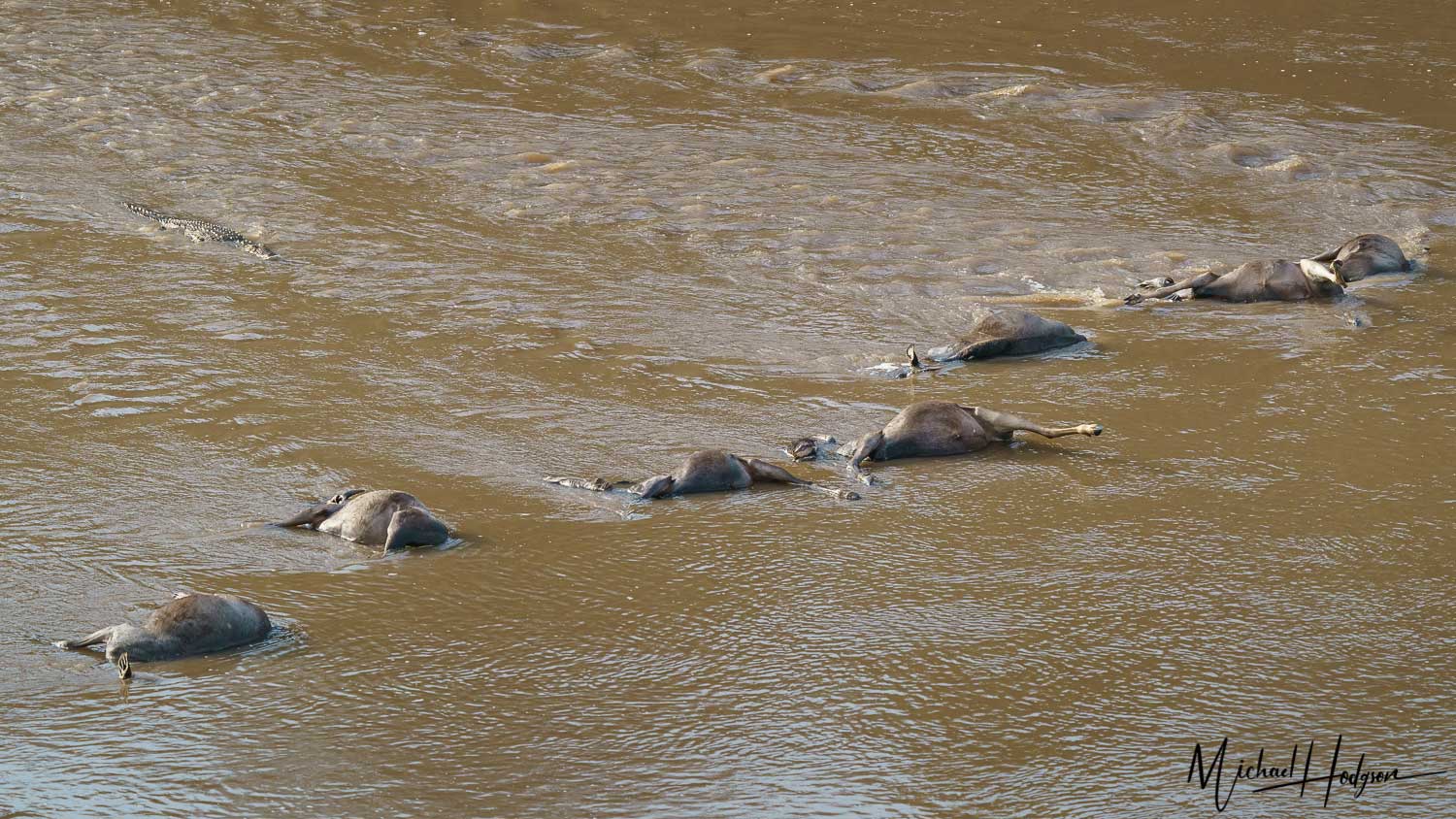 The majority of wildebeest deaths are not a result of crocodile attacks. These wildebeest died in an earlier crossing, where their bodies will become future meals for crocodiles, hyenas, vultures and more. The cycle of life. 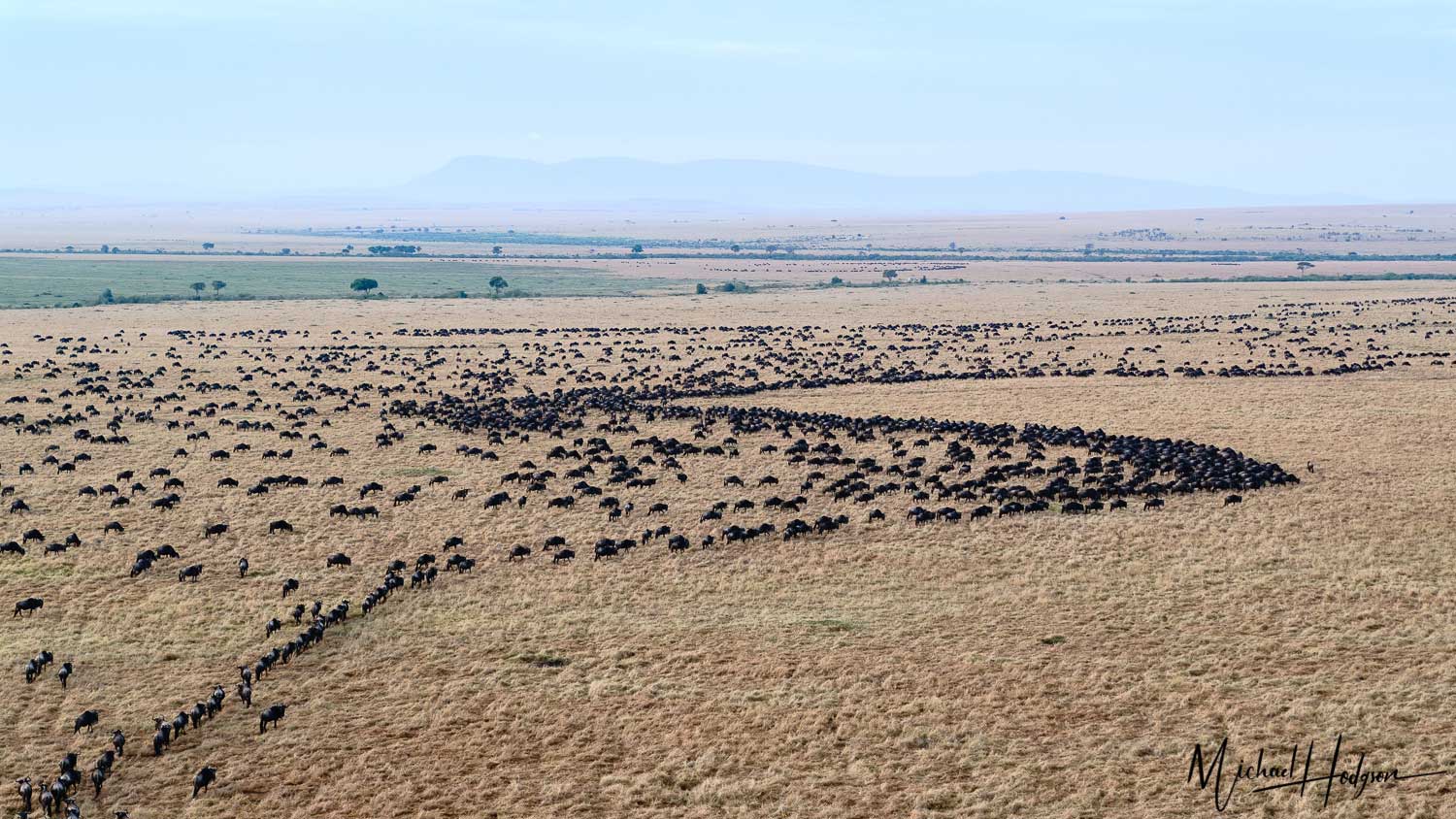 The wildebeest that survive continue streaming into the Maasai Mara in the thousands. Many will return to the Serengeti where, between January and March, another half million wildebeest will be born. And then, beginning in July, the cycle and the Great Migration starts all over again.

Discover more things to do in Kenya 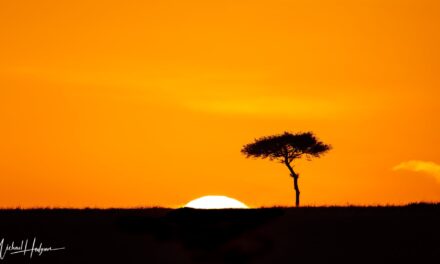 Why I Love Kenya – For 43 years I dreamed of returning 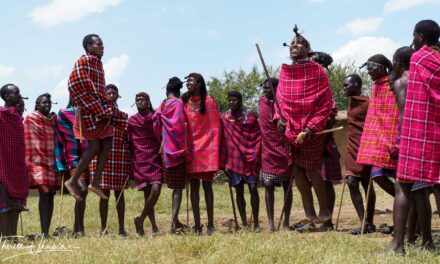 Visiting a Maasai village in Kenya – What to expect 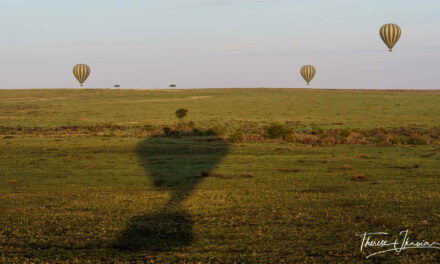 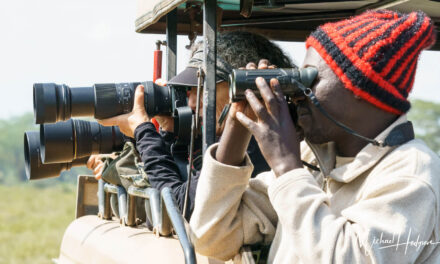 Photo Safari Tips: Make the most of your African photo safari