Historic Genoa a perfect US 395 stop in Carson Valley Nevada 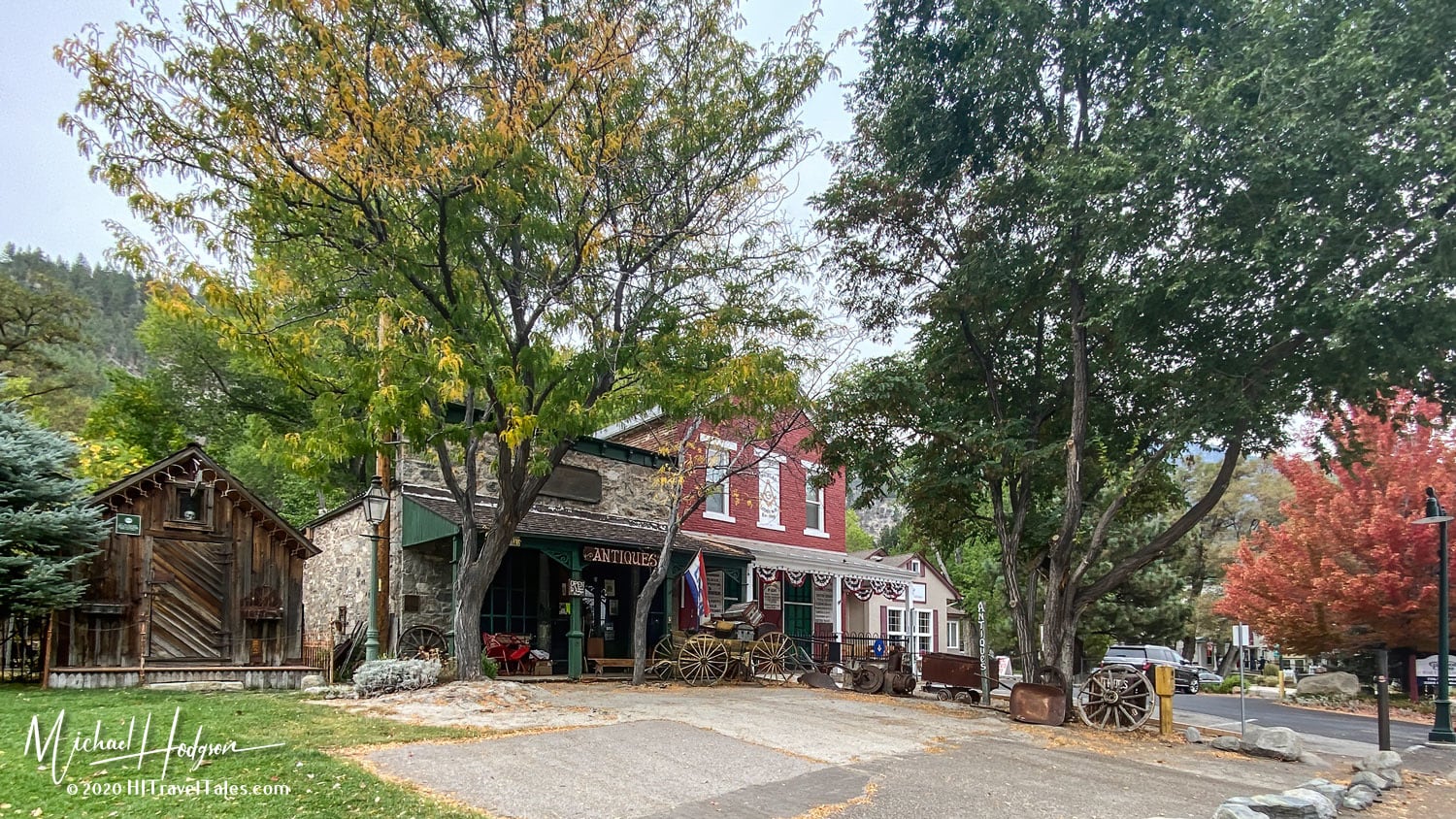 Located just south of Reno in the Carson Valley, and tucked up against the Eastern Sierra Nevada on US 395 in Nevada, historic Genoa is worth even a brief stopover. Dating back to 1850, the quaint village promises history, hikes and great food and drinks.

Let’s start with the nitty-gritty: The Nevada town of Genoa in Carson Valley is pronounced “Jen-OH-uh.” Not “JEN-oh-uh,” like the Italian city. Genoa is in fact pretty far from Italy, hunkered at the base of the Sierra Nevada’s eastern slope. That spot combined with its history and outdoor beauty makes historic Genoa perfectly located for a road trip stopover, a day excursion from regional cities such as Reno, or a visit for some Western history when heading up or down US 395.

At the edge of beautiful Carson Valley, Genoa isn’t right on the 395 highway. Which means even folks we know who have gone up and down that Eastern Sierra route innumerable times often haven’t taken the time to head west for a measly six minutes to visit historic Genoa.

Don’t you make that mistake! If you are in Carson valley, Reno or Lake Tahoe, or driving US 395, head over to Genoa for a few hours to an entire day. Gorgeous hikes, history dating back to 1850, family-friendly fun, and seriously some of the best food in the region await you.

How to spend a day visiting Genoa on US 395

You can pick and choose from our list, depending on how much time you have. An all-day adventure must include Mormon Station history, the Genoa cemetery, and a hike, while an outing that extends into the afternoon or evening needs to include a visit to the Genoa Bar and Saloon or the amazing Pink House restaurant. If you just want a mid-drive leg-stretch, then take a walk around town and grab lunch at the Pink House instead. 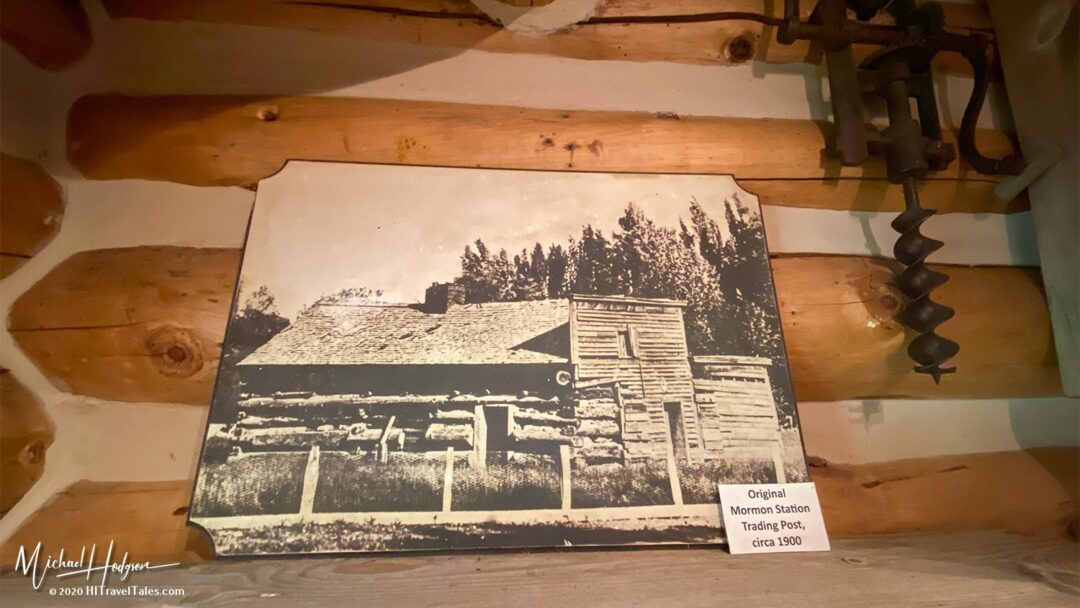 In 1850, two Mormon trader pioneers established a temporary trading post nestled up against the hills on the west side of Carson Valley. In 1851, others realized this was perhaps more lucrative than hunting for gold, and a permanent trading post on the Overland Emigrant Trail was created, which quickly grew into a settlement with everything travelers needed. It was dubbed “Mormon Station,” but the name was changed in 1855 to “Genoa,” in honor of Christopher Columbus’ birthplace. Genoa became a key outpost as gold and silver discoveries continued, but it declined in importance in the early 1900s when the county seat moved over to Minden a few miles away. 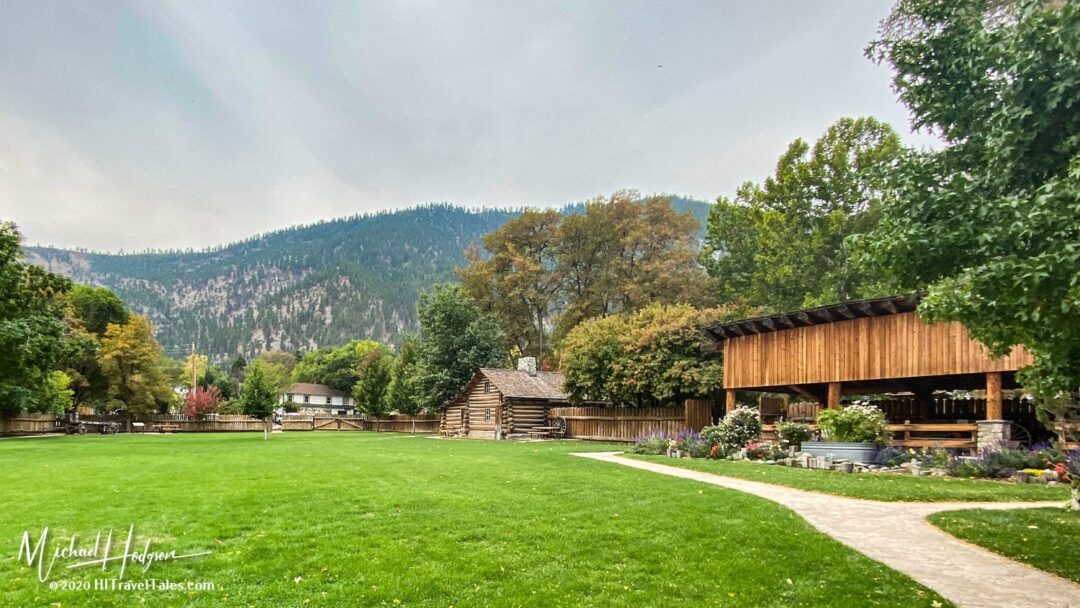 Today, in Genoa, there is the small but quite interesting Mormon Station State Historic Park  with a museum that was rebuilt to replicate the original outpost that burnt down in 1910 along with most of the town. There, you can wander through the old stockade and wagon shed next to the park; an expansive green space with mature trees offers shade for picnics and a little playtime for the kids. You could spend anywhere from 15 minutes for a quick visit here or a couple of hours if you read the signage, wander the museum, and hang out on the lawn. The only tiny fee is for the museum — $1 when we went through in 2020. 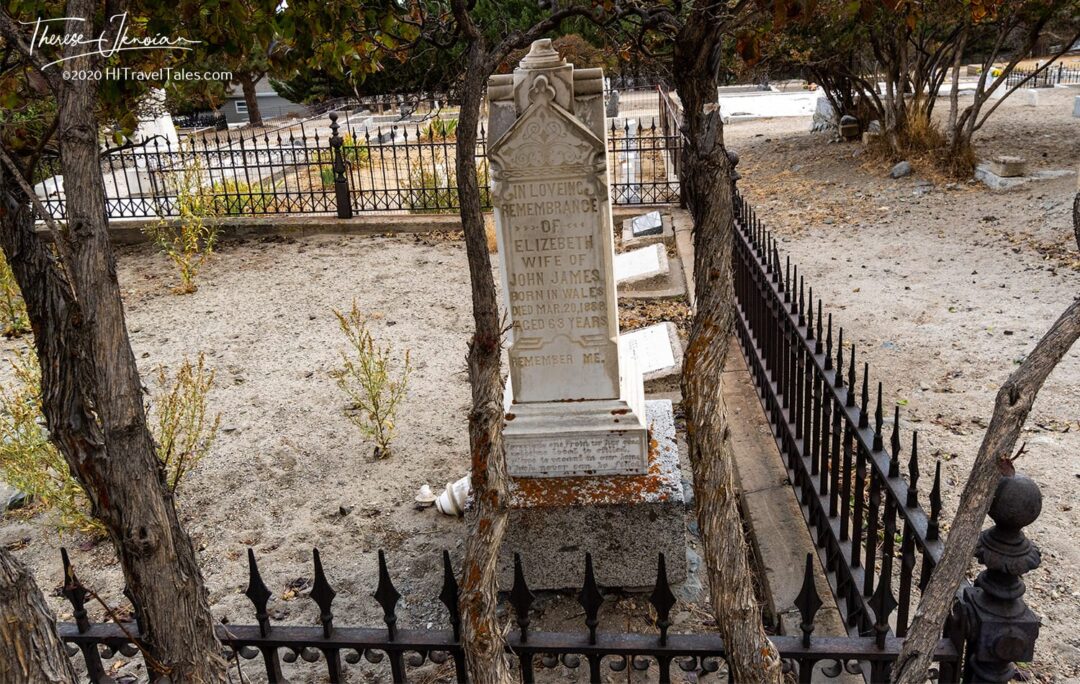 For cemetery and history buffs, the historic Genoa Cemetery just a half-mile up Main Street from Mormon Station is a great place for a stroll to admire headstones and wonder about the pioneers’ markers. Outdoor and ski enthusiasts will want to find the gravesite of Snowshoe Thompson. A Norwegian immigrant, Jon Torsteinson–Rue, a.k.a. “Snowshoe,” was an expert skier, and the U.S. Postal Service was desperate to successfully deliver mail across the mountains. 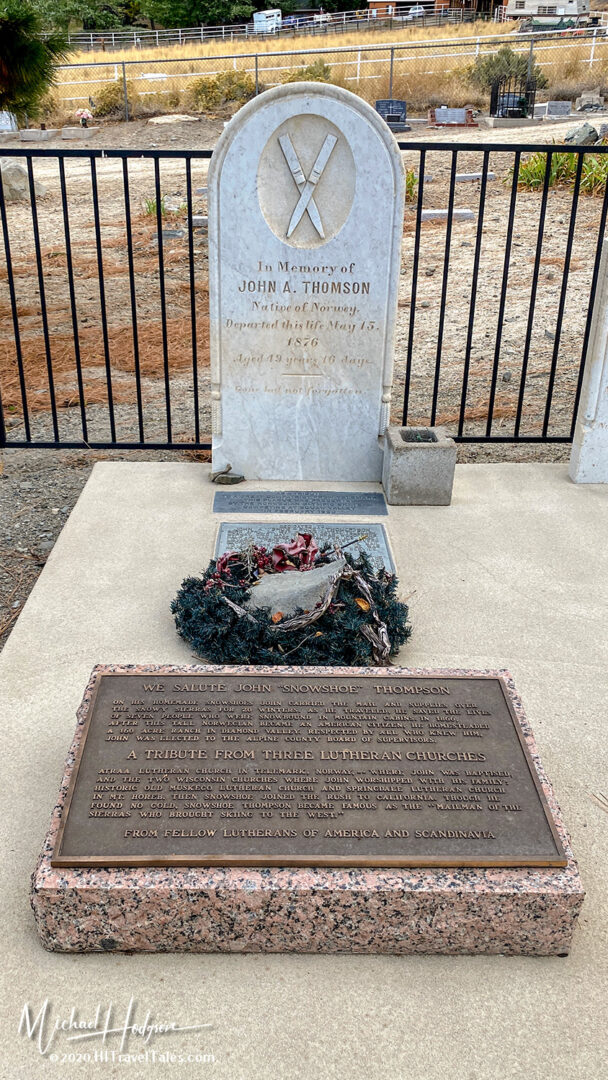 In 1855, he took a job to carry mail from the Sacramento, Calif., region across the Sierra Nevada to Genoa – on heavy homemade skis. Nobody else had been able to complete this crossing successfully. Several times a month until 1876, he’d make the three-day trek, becoming a legend for his ability, athleticism and promptness. He died in 1876 from appendicitis and was actually never paid for his services. His gravesite has a pair of crossed skis with the engraving, “Gone but not forgotten,” and a statue of Snowshoe Thompson is in front of Mormon Station park. Once at the cemetery, you could spend a few minutes going straight to his grave, or wander for an hour as we did – but we are fans of old cemeteries.

Take a hike on the Genoa trail system

With 16 miles of trails accessible right from the little historic town of Genoa, why not shake off your road trip with a little activity? Particularly recommended is the southern section of the Genoa Loop, which takes you to a nice waterfall. You can do the loop from either end as an out-and-back or complete the entire loop as a one-way trek, which includes connecting the ends along Main Street (8.6 miles, about 7 if you plan a car shuttle at each end). To head to the waterfall, head out Carson Street and up the trail (approximately 6 miles round trip).

Looking for something mellower, paved, and accessible? Take the Genoa Vista Trail from town south to Walley’s Resort (1.3 miles one way). Head to the Carson Valley Trails Association for maps and details. 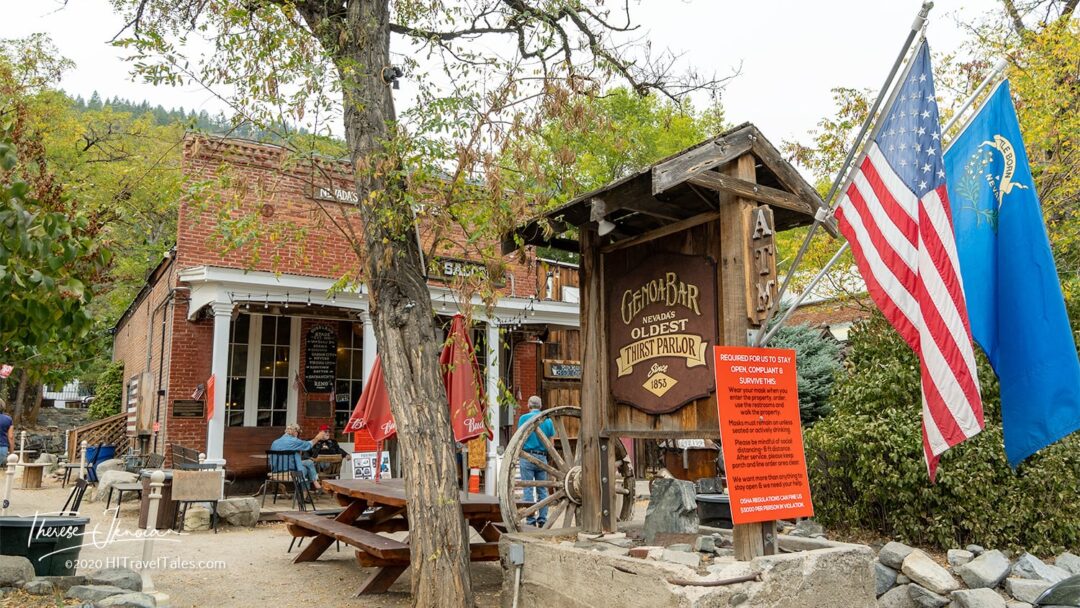 Founded in 1853, the quaint yet historic Genoa Bar does indeed call itself a “thirst parlor.” Much of the building is original (this section of town did not burn down in 1910). Admire the wood floors, one red original oil lamp, and a “diamond dust” mirror – basically a mirror with a real silver backing. The Genoa Bar is a destination for many, including road cyclists and motorcyclists, to car clubs to history geeks. Movies have been filmed there, and celebrities and musicians have also visited. Genoa Bar oldest saloon definitely has a Western flavor and Old West attitude! We visited during the COVID-19 pandemic and thus were not able to get inside, since it was abiding by all safety protocols with spaced outdoor seating – which was great in nice weather! 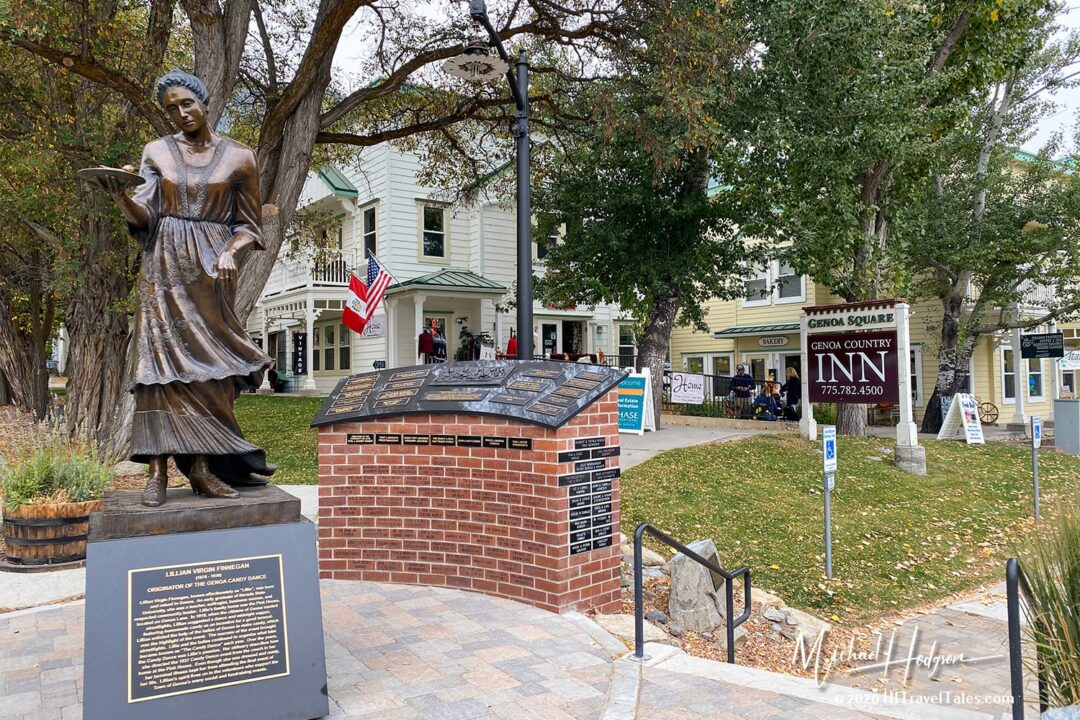 Special events abound in Genoa if you time it right

The little town of Genoa Nevada in Carson Valley also has any number of special events organized by proud locals, including the so-called Candy Dance. A popular event that shuts down the streets and attracts people from around the region, the Candy Dance, normally held in September (canceled in 2020 due to the COVID-19 pandemic), was first held in 1919 to raise money for streetlights. Of course, in 2020, all events ended up being canceled, including, outdoor concerts and holiday events, but we are looking forward to their return. 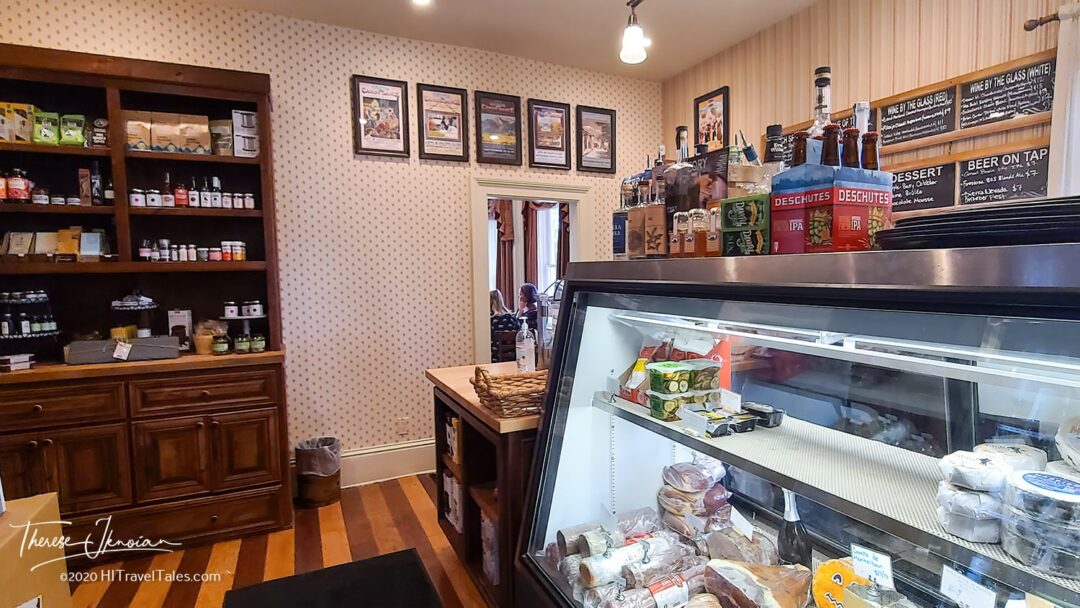 Ready for dinner? Head straight to the Pink House

Ed Note: On October 25, 2022, the Pink House announced on its Facebook page it has new owners. “Well friends, the time has come to spill the beans! The Pink House has officially sold. The new owners are Ike Marr and his wife Stephanie. They have lived in Genoa since 2015 and are both humbled and honored to have been chosen by Lois and the crew to continue the history of The Pink House into the future.”

Prior to being purchased by Lois Wray and her husband, Dan, in 2014, the “Pink House” – yes, it is in fact pink now – had been a private residence, and had housed rental units and commercial businesses, but had fallen into disrepair. Wray told us after going back and forth past it for a few years and thinking, “Somebody needs to fix this up,” her husband talked her into taking on the monumental task. Working with the Douglas County Historical Society and the State Historical Preservation Office, the Wrays restored the circa-1855 building to its Gothic Revival splendor. The Pink House restaurant (on the National Register of Historic Places since 2004) opened in late 2015 and has been a destination for fine dining with a European flair for locals and day-trippers alike. 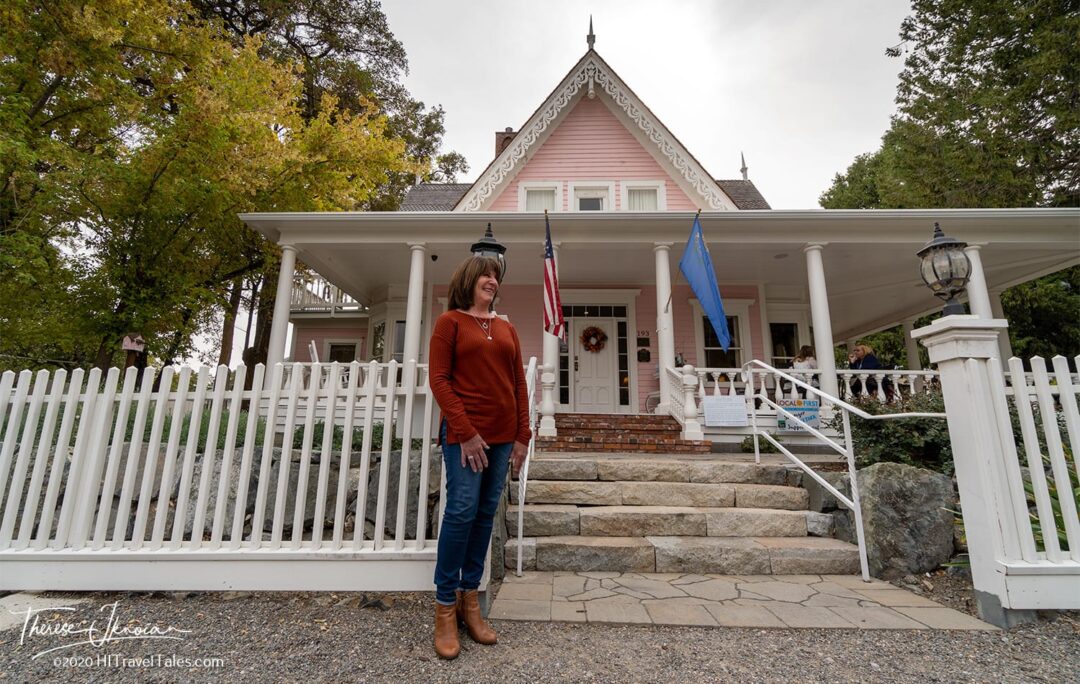 Yves Gidot, the French chef who had overseen the renowned “La Ferme” restaurant on the adjoining property, took over the kitchen at the Pink House because La Ferme closed in 2015. If you are looking for fine cheeses, a huge variety of charcuterie, meals with a fine and wordly touch, and a variety of select wine, beer and whiskey, not to mention an amazingly well-trained staff, a meal at the Pink House is a must. You can also order goodies to go in the charcuterie shop. Make a reservation to assure you get in, especially on a weekend. We highly recommend the signature item, a custom charcuterie board! 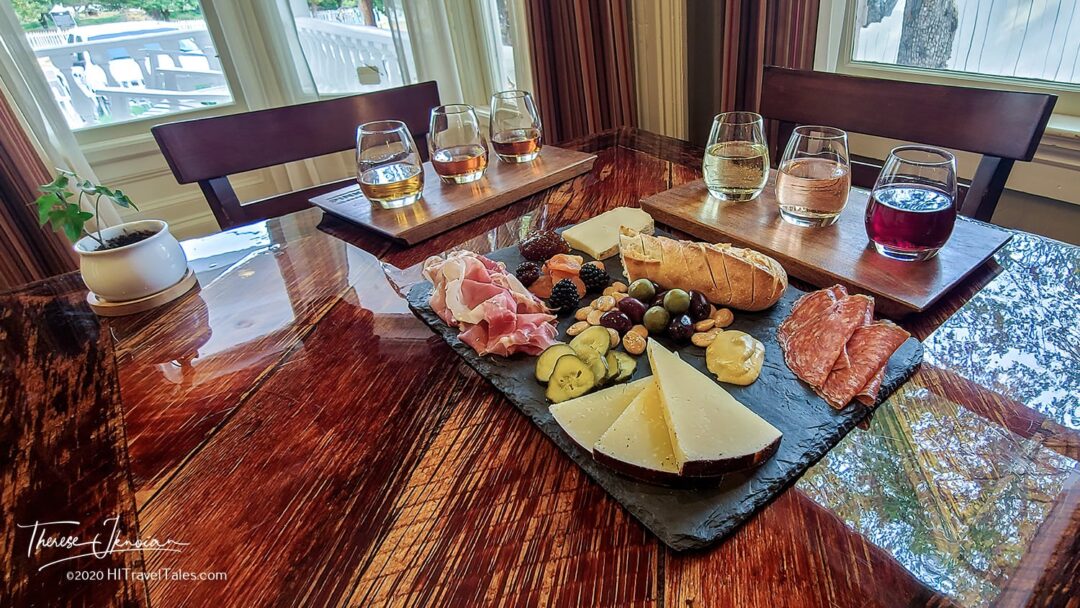 One side note: Wray has restored the former La Ferme property and building, and it has reopened as Daniel’s Fine Dining. Gidot will oversee the kitchen there. Meaning that tiny little Genoa has two of the finest destination restaurants you can find anywhere in the broader region.

Discover other things to do near Genoa 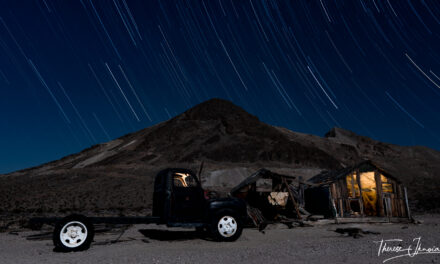 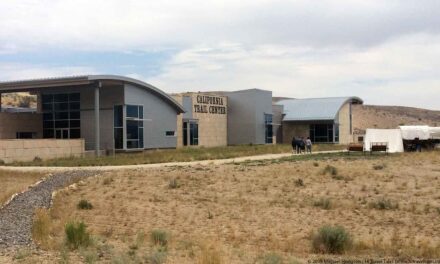 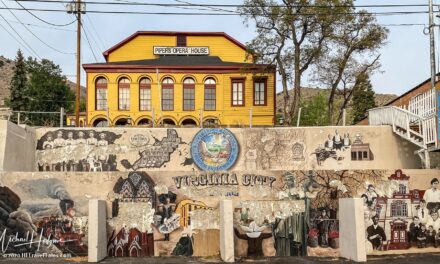 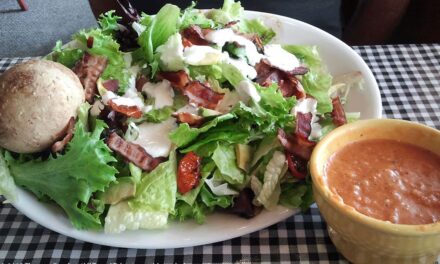