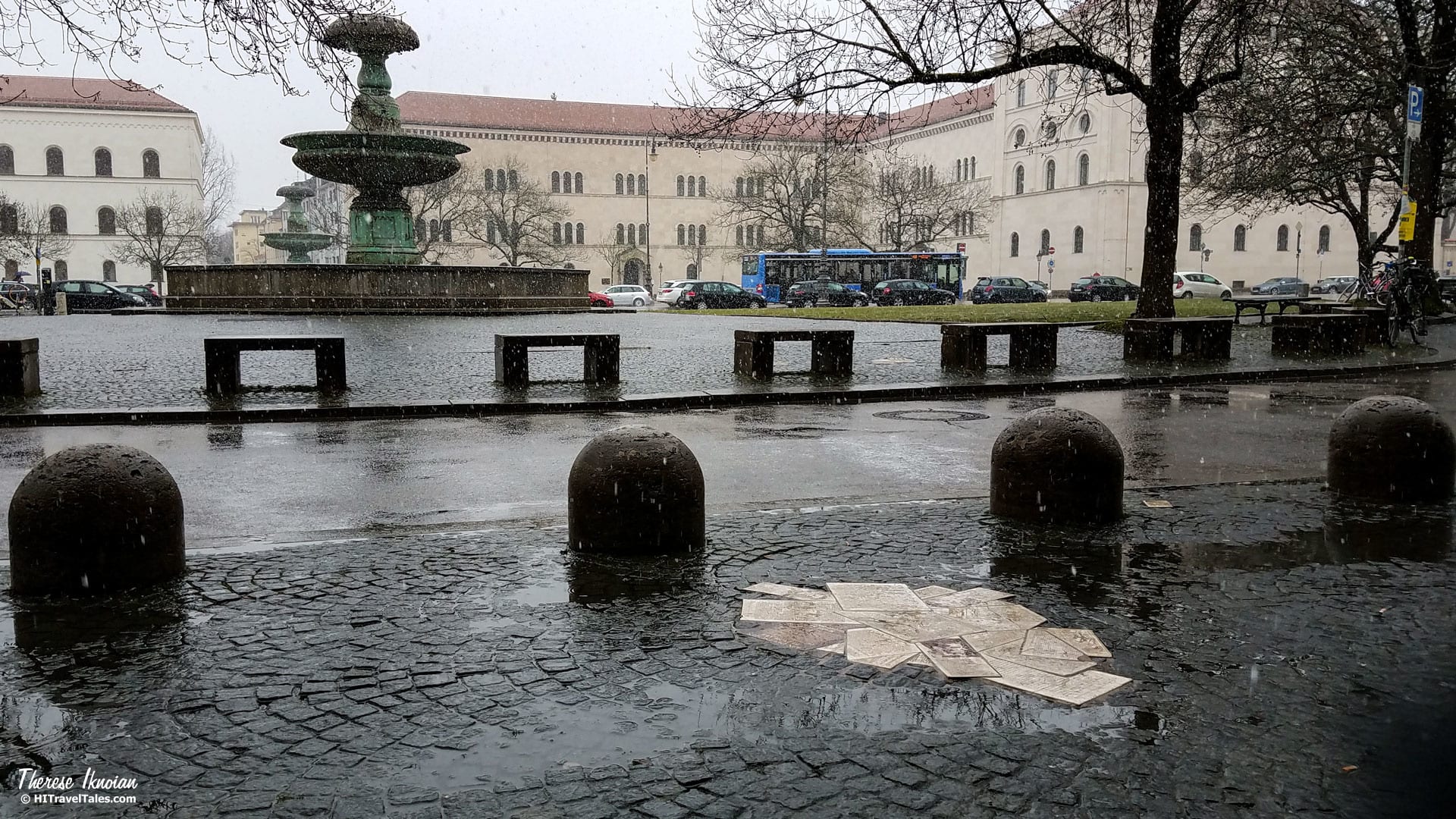 Sophie Scholl and the White Rose movement are a poignent reminder and example of the power of youthful resistance to the Nazi regime in Hitler’s Germany. The White Rose memorial commemorates the history of the students’ resistance.

Next time you are in Munich, be sure to visit the Sophie Scholl memorial. These days Munich is better known for the Oktoberfest (which actually starts in September, but that’s another story). The grand Bavarian city hides dark secrets of Hitler and his 3rd Reich behind all the oomp-pa-pas and ein-zwei-suffa clinking of huge beer steins.

One is in front of the Ludwig-Maximillians-University building on Ludwigstrasse in Munich’s Schwabing district. I have been in Munich more times than I have fingers and toes, but it wasn’t until a friend, who is a trained city guide, pointed out this amazing little “memorial” to Sophie and the White Rose movement that I was aware it was there. 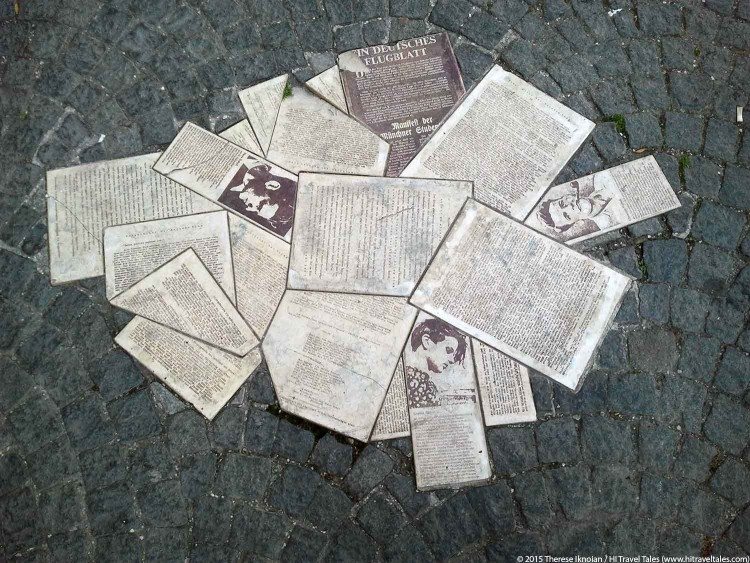 Easily missed, the Sophie Scholl memorial looks like loose pieces of paper scattered on the ground in front of the university building. In actuality, they are attached permanently to the ground in front of the main entrance on the so-called “Geschwister Scholl Platz.” “Geschwister Scholl” means basically “Scholl siblings.” Hans and Sophie Scholl were founding members of the student resistance movement to Hitler’s regime called “White Rose” (Weisse Rose). They bravely wrote and printed flyers denouncing the Nazi regime and distributed them in Munich at the university. They were in the end tracked down by the Nazis and put to death by guillotine, as were other members of the White Rose (All of this is depicted dramatically if not disturbingly in the 2005 Oscar-nominated film “Sophie Scholl: The Final Days”).

Read up a bit on the bravery of these Scholl siblings who were key in the ultimate downfall of Hitler, and then take a walk to the massive front doors of this university building. Stop to soak in the representation of the Hans and Sophie Scholl flyers on the stones in front. It was their sixth flyer in 1943 called “Ein Deutsches Flugblatt” (A German Flyer), depicted on the ground here, which resulted in their arrest. 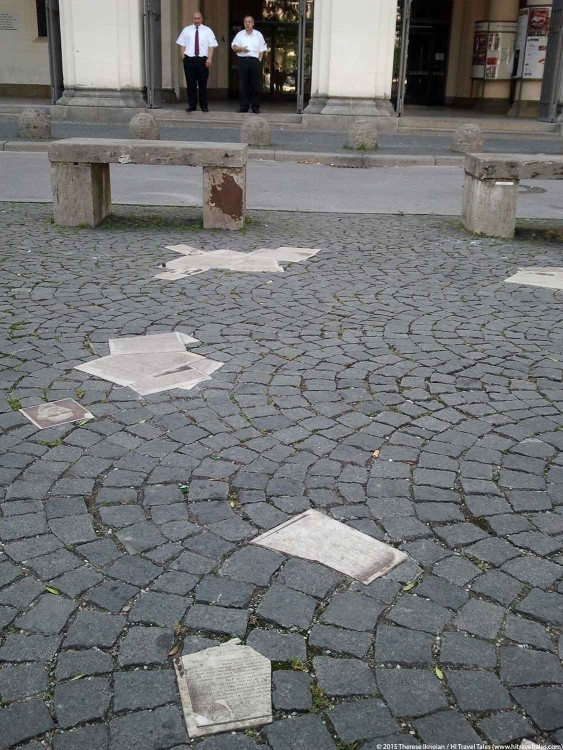 Step inside the building and walk into the light-flooded center courtyard. Look up at the second floor gallery. That is where the siblings sent the papers flying so they would flutter down and be available for all the students to find. Also look at the statue of Sophie Scholl. Imagine this stark building filled with students in the 1940s as the flyers littered the stairwells and Hans and Sophie Scholl being tracked down by Nazi guards.

Unfortunately, the Munich visitors website only has information in German, but try an online translation tool to give you the gist.

The city office has however put together a so-called National Socialism historical “trail” that will help you navigate the city, visiting various 3rd Reich sites and memorials, including this Sophie Scholl memorial. Find information, maps and an audio version online by clicking here.

Want more? Memory Loops is an engrossing, award-winning art project and virtual memorial with175 English audio tracks (300 in German) with voices and music recalling historical events during the NS regime between 1933 and 1945.

Learn more about the dark Nazi history in Munich

Learn more about Munich’s dark past and its place in the birth of Nazi terror by visiting other Nazi historical sights and museums. Learn more by reading White Rose Museum a haunting memorial to anti-Nazi movement and Munich NS Documentation Center teaches terror of Nazi reign. To learn more about other places to see in Munich, be sure to read our What to do in Munich: The ultimate city guide for travelers with its downloadable Ultimate City Guide to Munich PDF, free for our Subscriber Club members.

Discover more things to do in Munich related to Nazi history 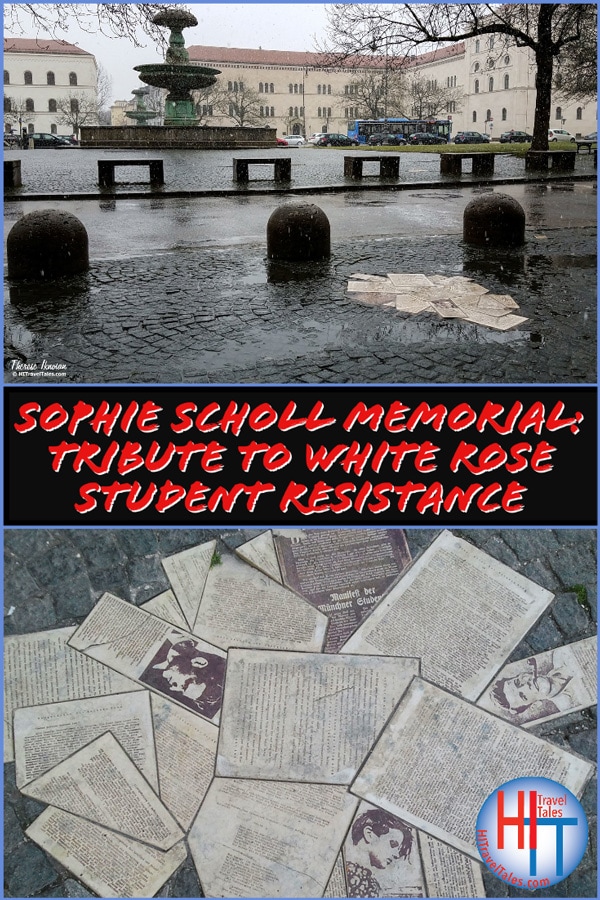 Heads up! This information on the Sophie Scholl Memorial was accurate when we published it on HI Travel Tales, but, as we know, traveling is all about changes (and inflation, sadly). It is your sole responsibility to confirm prices, transportation schedules, hours of operation, safety and health considerations, and any other important details before your adventure.
Advertisement 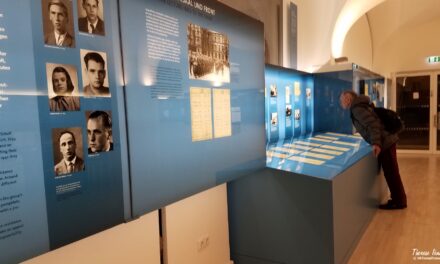