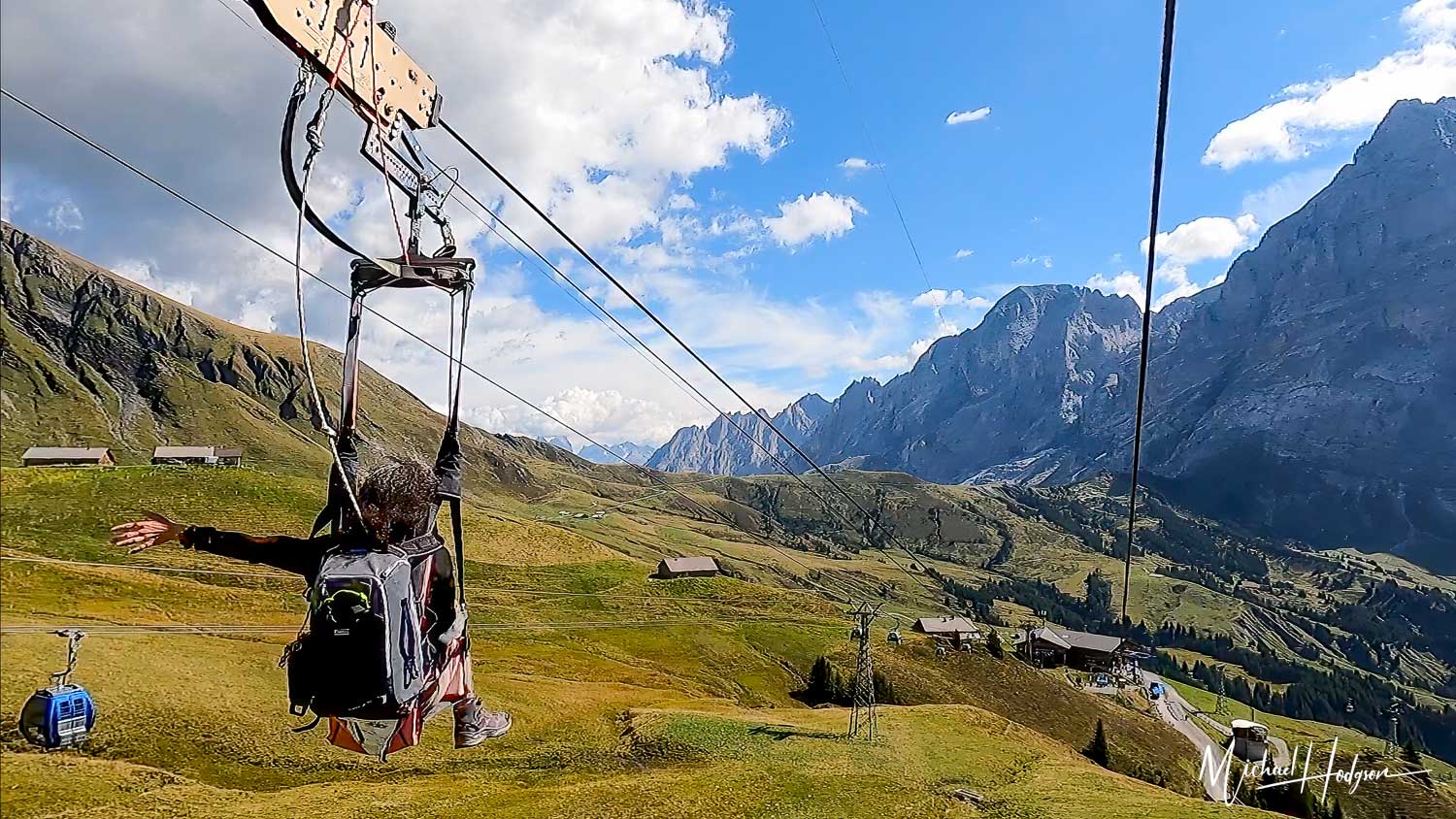 High above Grindelwald, Switzerland, sits the adventure and skiing mecca known as Grindelwald-First in the Jungfrau region. Here, with a spectacular view of the Eiger mountain, anyone can safely experience a day of alpine adventure and thrills with Jungfrau’s “Top of Adventure” activities. Therese and I recently spent a very adventure-filled day riding gondolas, mountain carts, zip lines, and wandering a steel path hanging from the edge of a cliff.

Taking the gondola up to Grindelwald-First

Our day began at 10 a.m. with a 25-minute ride in the gondola from Grindelwald (3,392 feet) up to the summit station First (7,138 feet) – First is pronounced “Feerst” in German). From the open gondola window, I could hear the gentle clanging of Swiss cow bells as green mountain fields and quaint farmhouses below us slipped by.

As we passed through the mid-way Bort station, I watched with curiosity as a robotic arm picked up a three-wheeled cart and with a clang attached it to a rack on the side of our gondola — turns out these were the mountain carts we would be riding later. A few minutes later, as we arrived at another mid-way station called Schreckfeld,, another robotic arm just as quickly and efficiently removed the cart and plopped it on a conveyer belt to be whisked back to the start – Swiss efficiency and ingenuity at its finest!

A last steep climb up a cliff (with a view to our left of the famous Eiger North Face and of the zip lines we would be riding later), and we arrived at summit station First of Grindelwald.

Beginning with a Cliff Walk

Our adventures began with the First Cliff Walk presented by Tissot. This is one activity on the mountain you do not have to pay for. Although the walk along the cliff was fairly packed with tourists, it didn’t feel too crowded … until we arrived at the overlook. There, a long line formed as everyone waited patiently for their Instagram moment at the very end of the ramp. Therese and I both smiled with the knowledge that by 5:30 p.m., most of the tourists would be gone, and we would have this ramp and walk to ourselves. That is certainly one huge benefit of staying the night at the First inn or choosing to walk down to Grindelwald rather than take the gondola.

Plummeting down to Schreckfeld station on the First Flyer zipline

I love ziplines! Even the one-hour wait in line did not dampen my excitement. The incredible views of the Alps in the Jungfrau region helped pass the time, I will admit. Once up on the platform, Therese and I were strapped securely into our bucket seats, and we hung from the wire above just long enough to begin contemplating the upcoming 2,624-foot-long plunge down to Grindelwald-First’s Schreckfeld station. We’d heard the ride reached a top speed 52 mph.

With a “three, two, one, bye-bye” we were launched. Wind began rushing past me accompanied by the singing hum of the wire I was connected to above as a constant serenade. I looked to the right at the Eiger and smiled. Therese, lighter than me on the wire, soon passed by on my left, taking photos (of course!) with one hand out to catch the air as she flew toward Schreckfeld.

A huge grin plastered on my face, I catapulted agaiinst the springs at the bottom which safely and all too quickly brought my thrill ride to an end.

A slow ride up and fast glide down on First Glider

For a ride that promised riders would “feel free as an eagle” I didn’t feel too free at all bundled up in my stiff harness and truss. I waddled over to my wing position and then, when instructed, lifted my feet up behind me, and swung into a prone position, now hanging beneath the wings of a giant fake bird above. I glanced over at Therese next to me as she wriggled about trying to get comfortable – and arrange her camera for shooting. There were supposed to be four “flying” on this trip, but one decided at the last minute she just could not manage the discomfort she felt in the harness, leaving three of us to make the journey.

With a brief wave from the attendant, our “glider” began to climb up toward First station, feet first. It is a very strange feeling to be facing downhill while being pulled up, watching the ground slip away beneath you and Schreckfeld station get ever smaller. As we reached the top, the glider slowed and paused, leaving us hanging, pondering our fate. 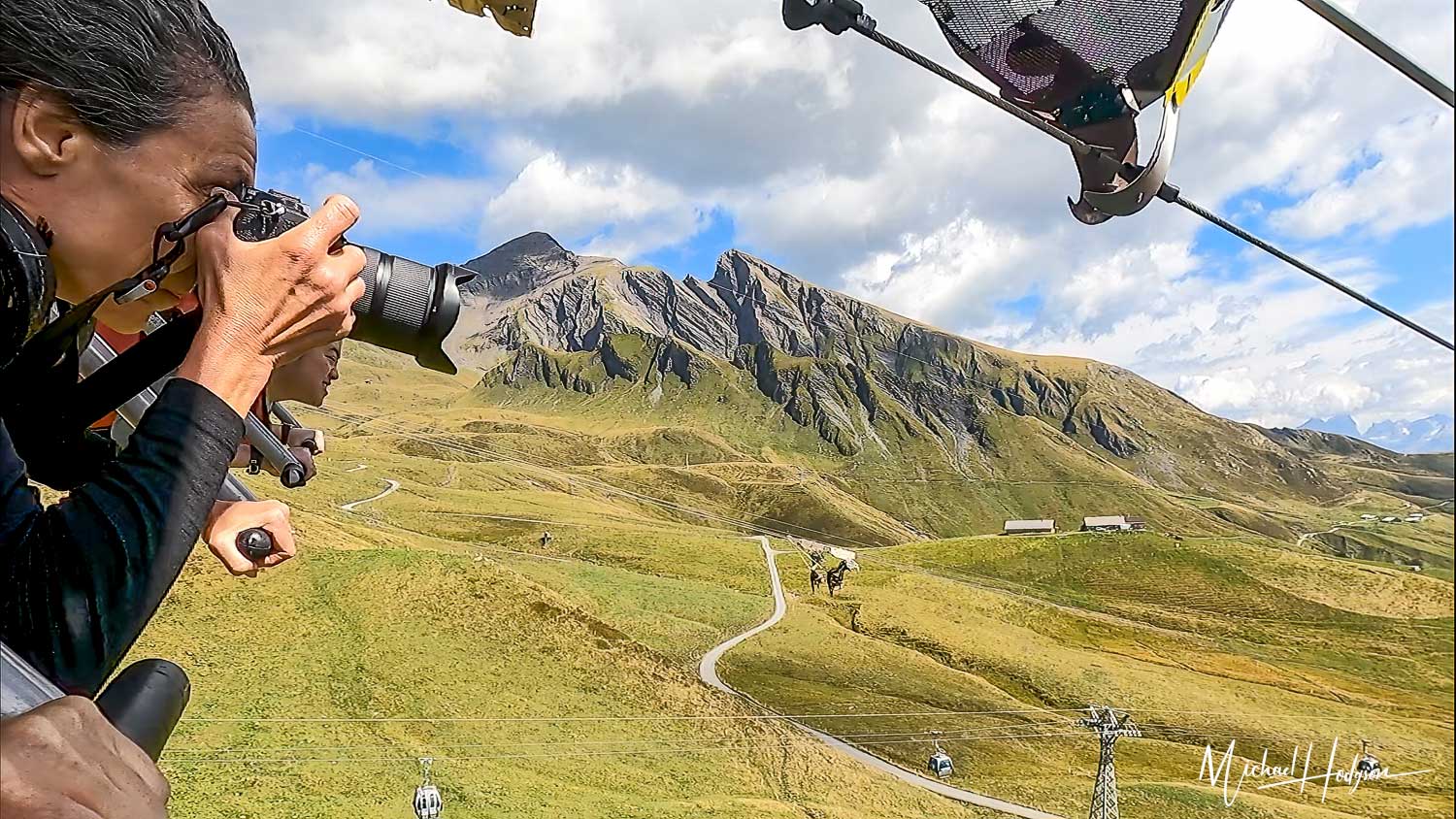 Then, without warning, we began our 43 mph (so I heard) glide back toward Schreckfeld. It was indeed a very different sensation than the First Flyer. With the First Glider, I heard only the sound of the wind rushing past – oh, and the quiet screams of joy (I think it was joy) from our accompanying passenger. And, just like that, we were back at the station, unclipping from our harnesses, and waddling back into the staging area to grab our things and leave. It was certainly fun, but to me, nowhere near as exciting as First Flyer.

After exiting the First Glider, we walked down and over to join a long line that moved quickly, unlike the previous rides. The safety talk, in Swiss-German-accented English, was nearly as entertaining as the ride itself (listen in below).

Helmets on, into our seats, and we pushed off … quite literally. The first 50 feet or so were relatively flat gravel, requiring a sort of awkward heel propulsion method I’d not used since riding a Big Wheel in kindergarten. Eventually though, gravity took over, and the free-wheeling ride began.

Riding the three-wheel Mountain Carts on Grindelwald-First quickly became my second favorite activity as Therese and I rolled quickly downhill, first bumping along on a rougher gravel path and then rolling smoothly on a paved surface all the way to the Grindelwald Bort Station. I can guarantee you will be laughing and smiling the entire time, just as we were. 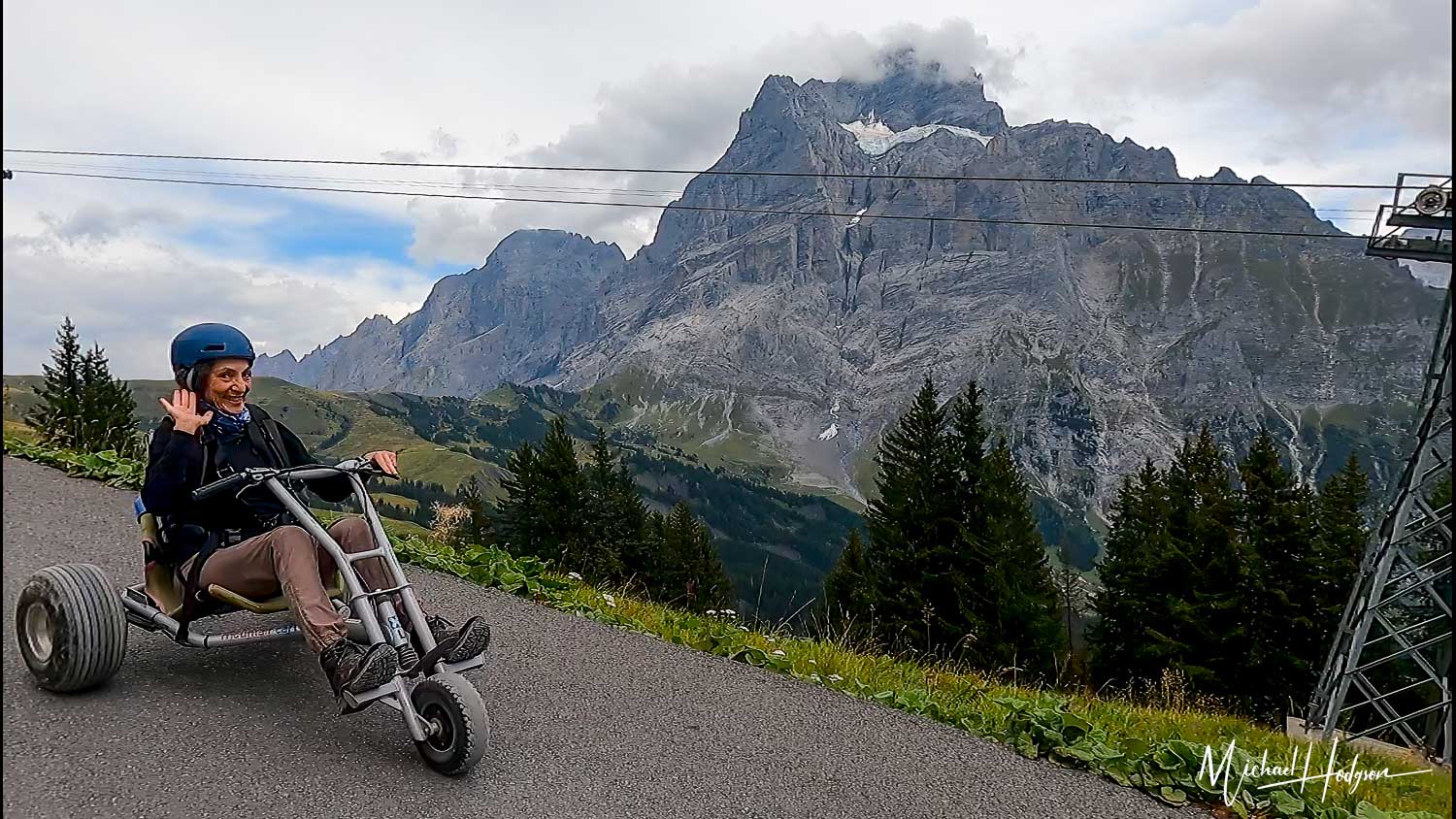 There is a fourth activity you can choose to do as well, on a so-called Trottibike scooter, going from Bort Station all the way to the town of Grindelwald. It looked super fun. By the time we got to Bort Station, though, weather was beginning to roll in, and it was late in the afternoon, so Therese and I elected to head back up on the gondola to start our evening with a well-deserved drink at summit station First at the First Mountain Inn where we were staying the night.

Ending with a sunset and rainbow on the Cliff Walk

As the sun set, I stood at the end of the lookout platform on the Cliff Walk gazing down at Grindelwald as it was slowly swallowed up in the shadows of the surrounding peaks. The alpine pasture and rolling terrain below my feet took on a rich glow, made more magical by the swirling clouds announcing an incoming evening thunderstorm.

A sudden downpour passed quickly, and the clouds pulled back like a Broadway stage curtain to let in the last rays of a setting sun painting the peaks in a rich shades of purple, yellow, and green. A rainbow arching over the valley became a colorful ribbon tied around a perfect day of adventure in the Switzerland Jungfrau Region. 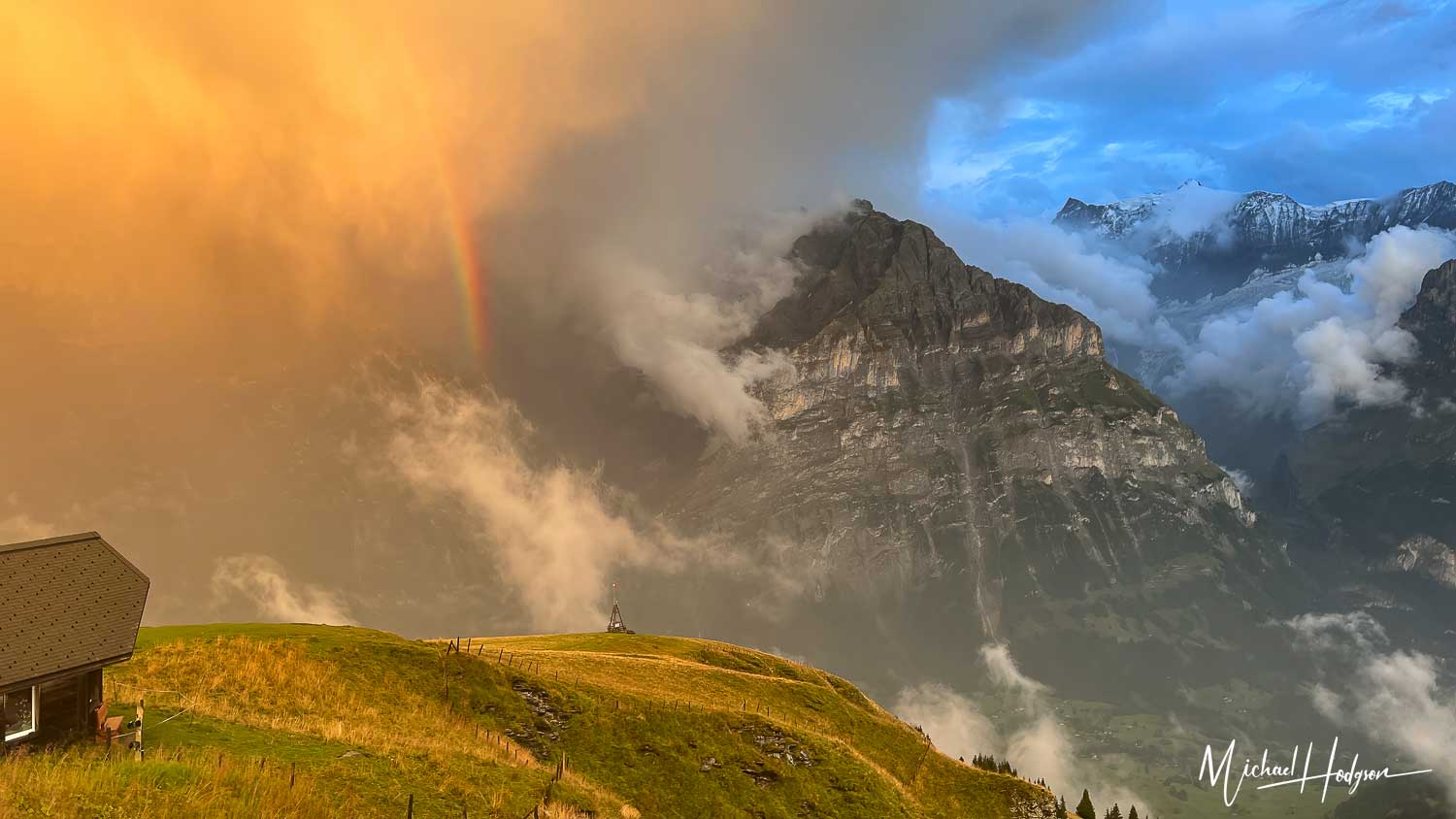 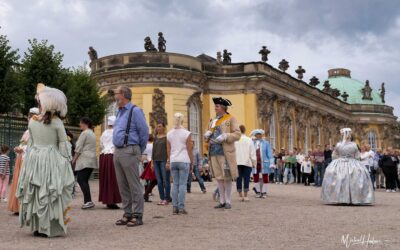