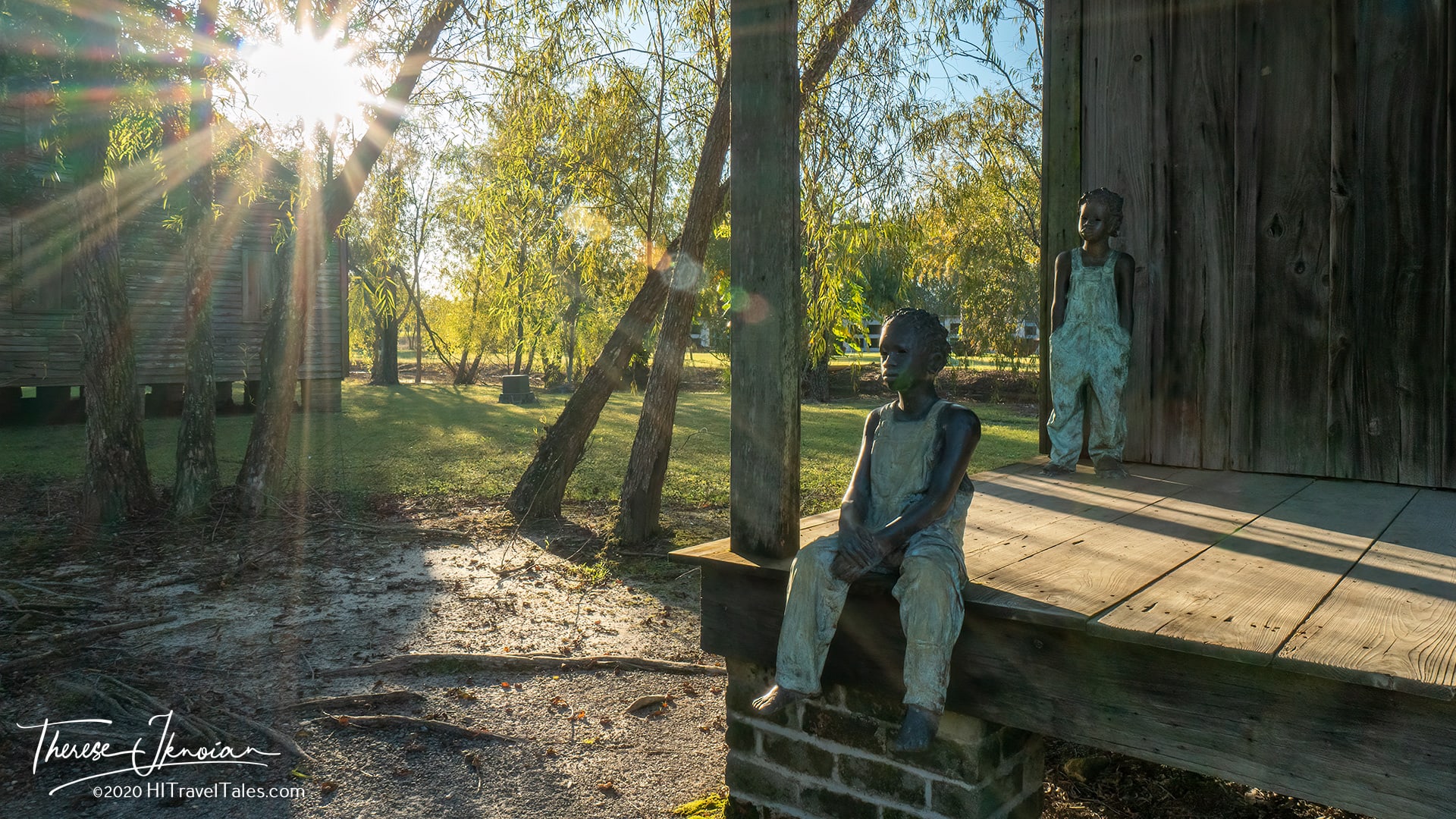 The tour at Whitney Plantation museum of slavery was so sobering that I actually found it difficult to take notes or many photos. Instead, I found myself mesmerized by the stories, philosophy and history shared by our guide during a tour of the plantation outside New Orleans.

Whitney, you see, is the only plantation that actually tells the story of slavery through the eyes of the slaves. On this New Orleans area tour in plantation country, there is no candy coating, no spectacular sweeping entrances and oak-lined walkways, no pristine green lawns, no sales of mint juleps to enjoy beside a pond, and no sanitized architecture that makes you gape in wonder and awe, ready to plan a glamorous wedding.

You spend 90 personal minutes with your guide who leads you through slave cabins, outbuildings and memorials to honor slaves at the former Louisiana sugarcane plantation. There is only a basic script, our guide Ali told me later; guides do a lot of filling in around the required points, often based on participant interest and questions. What is the goal of the tours at Whitney Plantation? “To tell the truth,” he said.

“Everybody can’t get to Whitney, but they can learn some of this history,” he said. “It’s important for young people to see this and know this and realize” what happened. “The system was business; racism was a tool; a person was a commodity.” 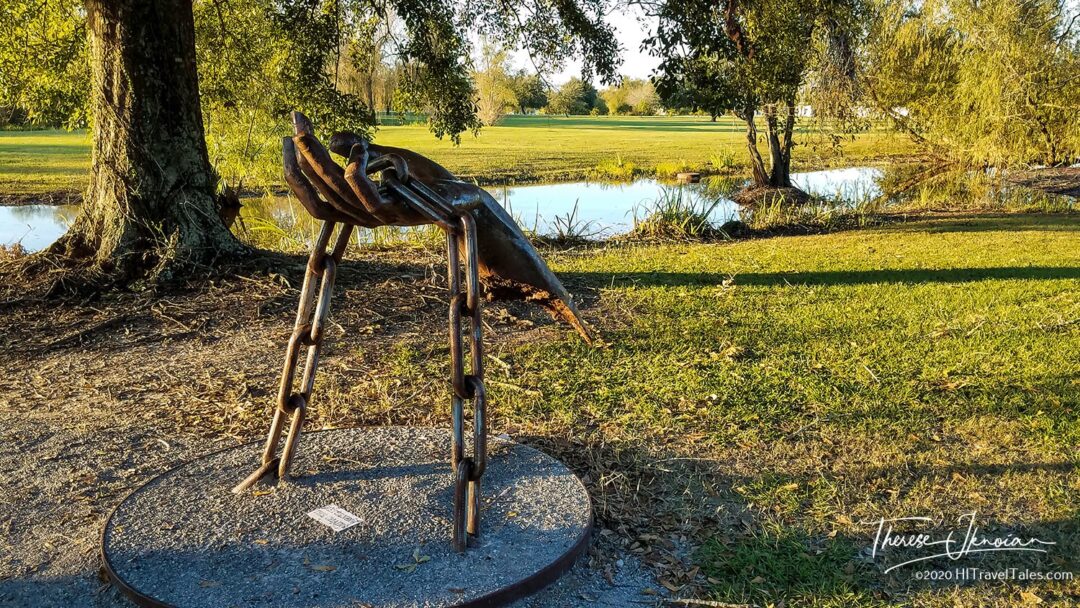 One of many sculptures or pieces of art on the Whitney Plantation museum of slavery is this one called, “Returning the Chains.”

Since it opened in December 2014, demand for its tours has been so immense that Whitney staff can’t accommodate all the requests for tickets. After five years, total visitor numbers were nearly 400,000 – but even that left many unable to experience the reality presented at what Whitney prefers to call a “museum of slavery.”

With such huge demand constantly growing – and with the COVID-19 pandemic closing down its tours for a time in early 2020 – Whitney staff went into high gear, pivoting on its plan for handheld audio guides for visitors who could not book a tour. Instead, Whitney quickly launched an app, also adding on-site self-guided tours with the app when they reopened. The app means you can also get the experience of the Whitney Plantation Museum tour anywhere. At home, you may perhaps not have the personal experience as we did of being onsite at the museum of slavery on the plantation established along the Mississippi River in 1752. Nevertheless, it’s a thorough experience filled with information, stories, history and photos.

Search under “Whitney Plantation” at either the Google Play Store or Apple App Store to download the app and start your journey through the museum of slavery. 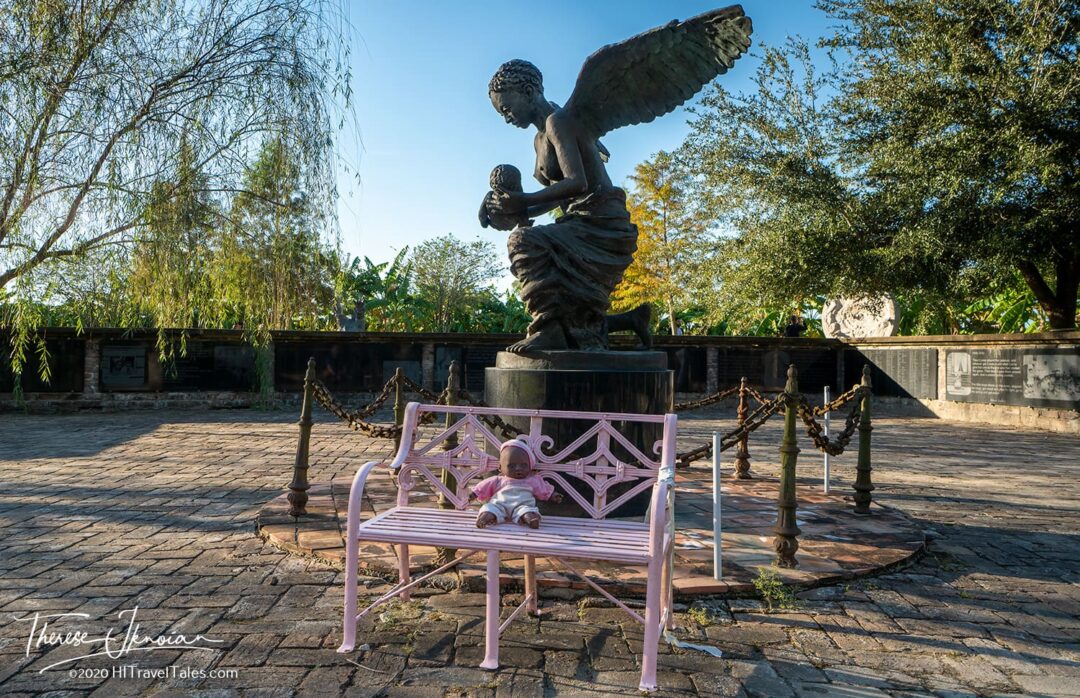 The Field of Angels is a memorial at the Whitney Plantation dedicated to the enslaved children who died in the parish between 1823 and 1863. Names and date of death are engraved on the plaques.

Meanwhile, In December 2019, Whitney held a fifth-anniversary celebration, a big turning point for the site. At the celebration, the New Orleans lawyer who in 1999 bought the former Haydel Plantation – at that time in disrepair after nearly a decade of being shut down – turned over formerly the entire ownership to the newly created Whitney Plantation 501(c)(3) non-profit and himself stepped down. Although always operated as a non-profit museum since its opening, this made it official: John Cummings, who had sunk about $10 million of his own money into restoration and development during his 20-year ownership, was no longer the owner; the Whitney Plantation Museum of slavery was now governed by a board of directors, said Joy Banner, Whitney director of communications. In case you are wondering, Cummings is a white Catholic who grew up in the area and only became immersed in the history of slavery after purchasing Whitney, Banner said, when he started doing detailed research.

Cummings, said Banner, is a “white Southern gentleman” who read and began to understand the legacy of slavery. “He allowed himself to learn the information….

“What is important and unique is that this is taking place on a Louisiana plantation,… but we still want folks to understand they are getting an education,” said Banner, who herself is a descendant of Whitney slaves and grew up about two miles away.

Stories of slavery hard to hear at the Whitney Plantation

When reading online reviews of Whitney plantation museum of slavery tours, many reviewers write something like, “it’s hard to hear” or “extremely emotional experience,” but then add that the education is important and will not be soon forgotten. Indeed, that’s why our guide, Ali Johnson, with a background in computers, came to be a guide. He passionately wants to tell the real story to all who will listen. 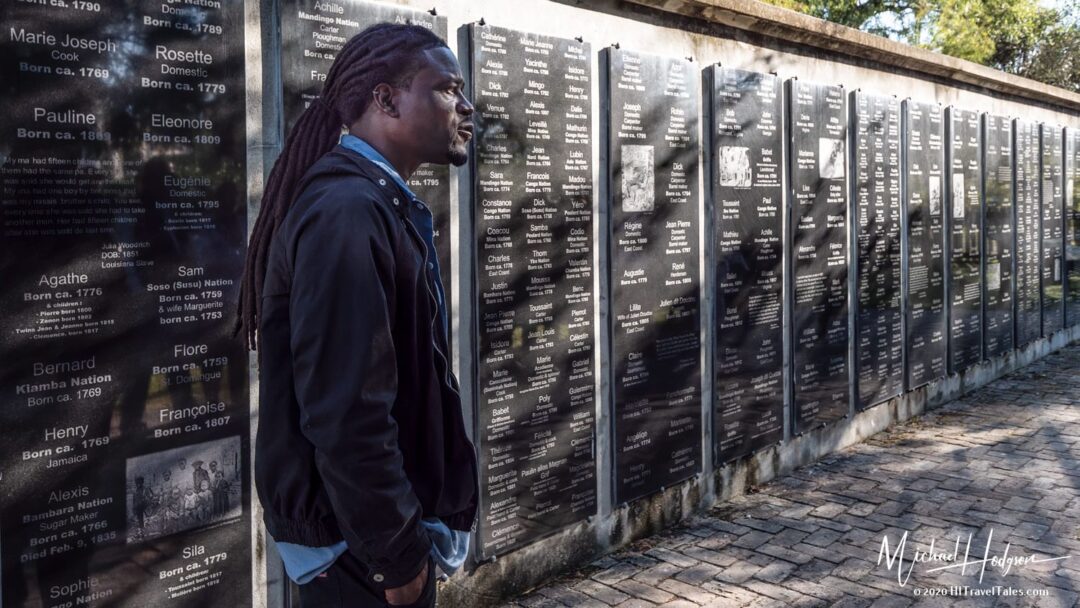 Our guide, Ali Johnson, told tales of history and politics at the Wall of Honor that lists names of enslaved people known to have been at Whitney Plantation.

I listened. The whole group listened. We listened so much that our tour took closer to two hours instead of 90 minutes. Standing at the memorial “Wall of Honor,” Ali talked philosophy and history as your eyes wander up and down the names of 360 known slaves who worked there. You also note there are not a lot of African names. Because, Ali says, many had their names changed in yet another way to rob their identity. Whitney was a working plantation of some sort from its founding in 1752 to 1990.

In 1990, Formosa Chemicals and Fiber Corporation purchased it with the intent to operate some kind of chemical-based manufacturing facility. The community however pushed back against yet another chemical plant in an area already known as “cancer alley,” plus there was a downturn in the market, Banner explained. Whitney sat empty and fenced off for nearly a decade. Cummings stepped in in 1999. The rest is history.

Many travelers flock to the New Orleans area plantation country for its grandeur of magnolia-draped plantations all along the Mississippi River, but Whitney Plantation is reality. In early 2020, during the resurgence of the “Black Lives Matter” movement, an Instagram post by Banner went viral with the statement “Why we don’t allow weddings:”

“Over 350 people were enslaved at Whitney Plantation throughout the 18th and 19th centuries. Our tour has always focused on the brutal labor and stolen freedom of those that created vast economic wealth for the enslaving families. We do not glamorize the Big House or the grounds,” the post read.

“In addition to our mission to educate visitors and the larger community about slavery and its legacies, our site is a place of memory and reverence. Our on-site memorials list the names of individuals who were enslaved at Whitney, individuals who were enslaved throughout Louisiana, children who died during enslavement, and a memorial for the revolutionaries of the largest US slave revolt. For these reasons, the Big House has never been nor ever will be a wedding venue. Plantations are sites of immense cruelty and violence. We do not allow any event that would overshadow this reality and disrespect the memory of all those who suffered, labored, and died here.”

We had already toured several glamour plantations, being led on tours of beautifully renovated and furnished mansions by ladies in poofy, hoop-skirted ballgowns. Certainly, they were gorgeous, but in a way it all felt a little Disneyland-esque, like a romp through Snow White’s castle. 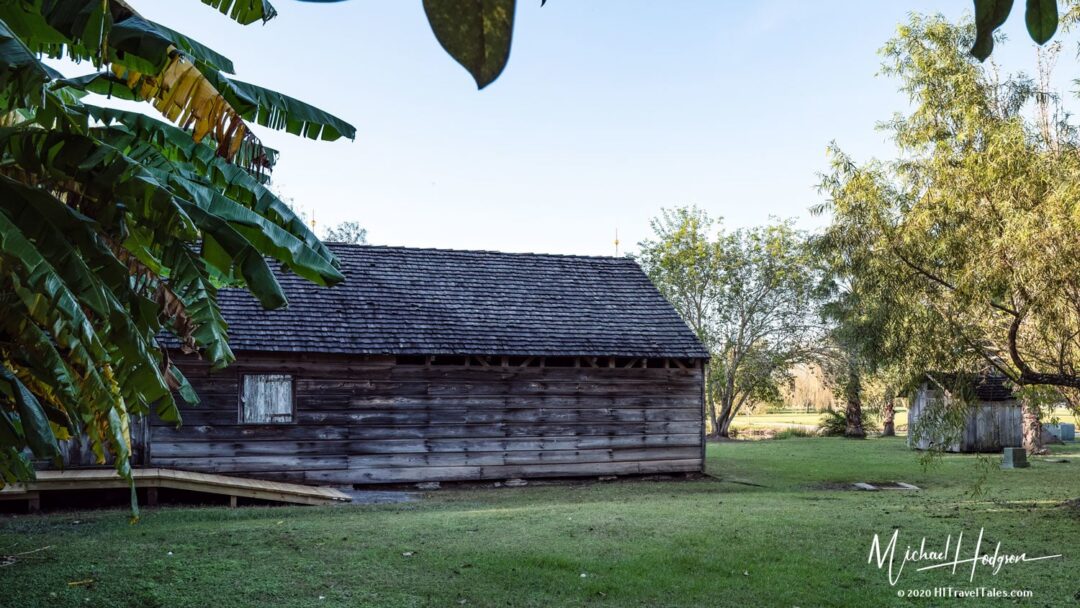 In contrast, what drew me in at the Whitney Plantation museum of slavery were Ali’s stories, combined with the haunting memorials, and simply standing next to fields gazing across where slaves once worked­. You were left to feel the breeze in your hair on a non-beautified plot of land where lives were just that commodity Ali spoke of.

Then there were “The Children of Whitney” statues – a series of haunting sculptures by artist Woodrow Nash scattered across the grounds. These small plaintive statues stand and sit with empty eyes, sadly and silently, in the church, on the stoops of former cabins, around the grounds, staring blankly into space. Ali said they are moved around so it can be a surprise to find them in different places.

These statues represent the stories from then-children who were enslaved on the New Orleans plantations, the sculptor has said. Their stories were collected in about 1940, meaning any living former slave was a child at the time of the stories they recalled. The sculptures by Nash represent those slave children. The statues are compelling embodiments of real children, begging you to sit down with them and listen to their stories, now preserved for others. 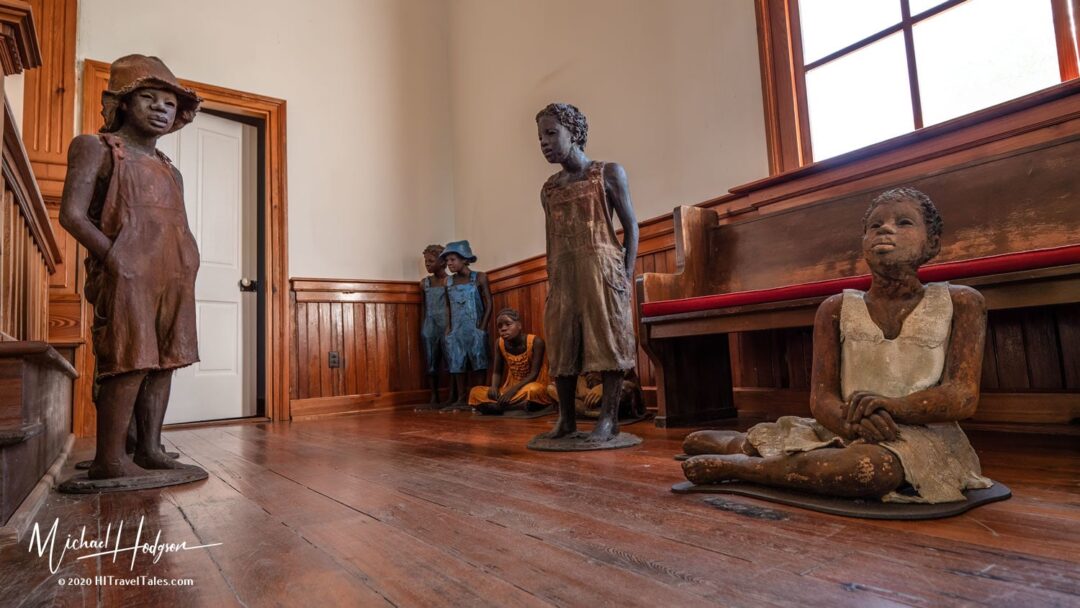 The Antioch Baptist Church was built by formerly enslaved people in 1870. It was not originally part of Whitney. Inside the church building are the haunting statues of children done by artist Woodrow Nash. These statues are also scattered around the Whitney grounds.

Visitor numbers at Whitney Plantation have nearly doubled every year since its opening, Banner said. As a Whitney descendant, she said, “what excites me most … is the opportunity to benefit the community.” Much of the descendant community still live right in the area. Thus, on the list of future projects for Banner are more community and school tours. “We have an obligation to the descendant communities,” she added.

In Whitney Plantation’s five years, some exhibits have changed, but “the basic message of telling the story of slavery is the same,” she added. “People are looking for a place and a space where the life and labor of people are respected.”

And, no, weddings will never be part of the plan. 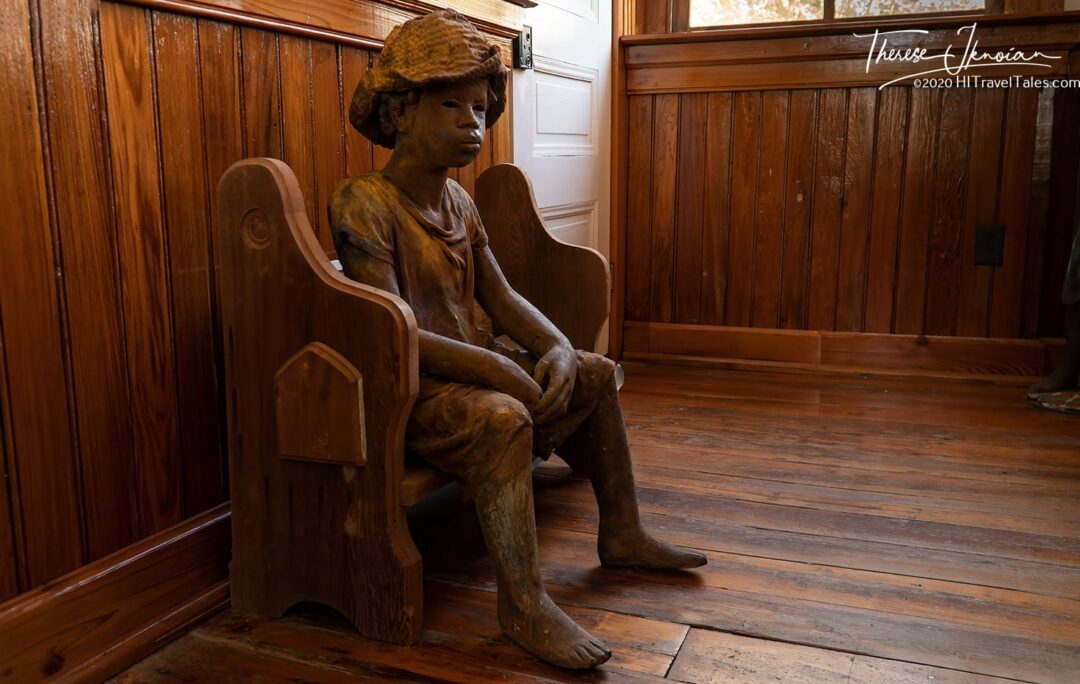 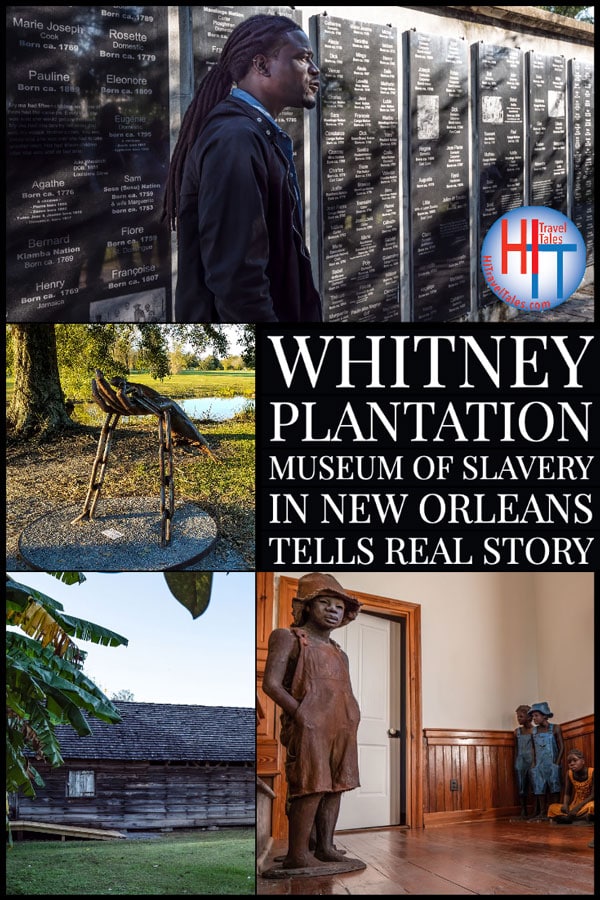 Disclosure:
Our visit to Whitney Plantation was hosted by Louisiana’s River Parishes. Any reviews, mentions and opinions here are our own, and are not approved, provided, or otherwise endorsed or influenced by Louisiana’s River Parishes or Whitney Plantation.​ ​
Heads up! This information on the Whitney Plantation Museum was accurate when we published it on HI Travel Tales, but, as we know, traveling is all about changes (and inflation, sadly). It is your sole responsibility to confirm prices, transportation schedules, hours of operation, safety and health considerations, and any other important details before your adventure. 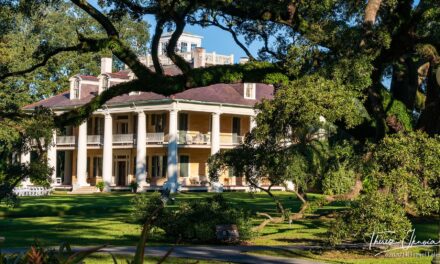 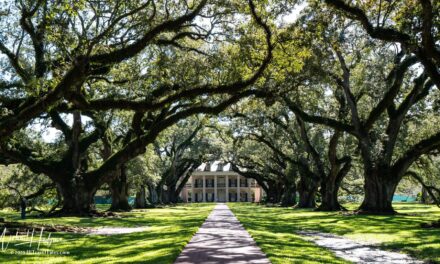