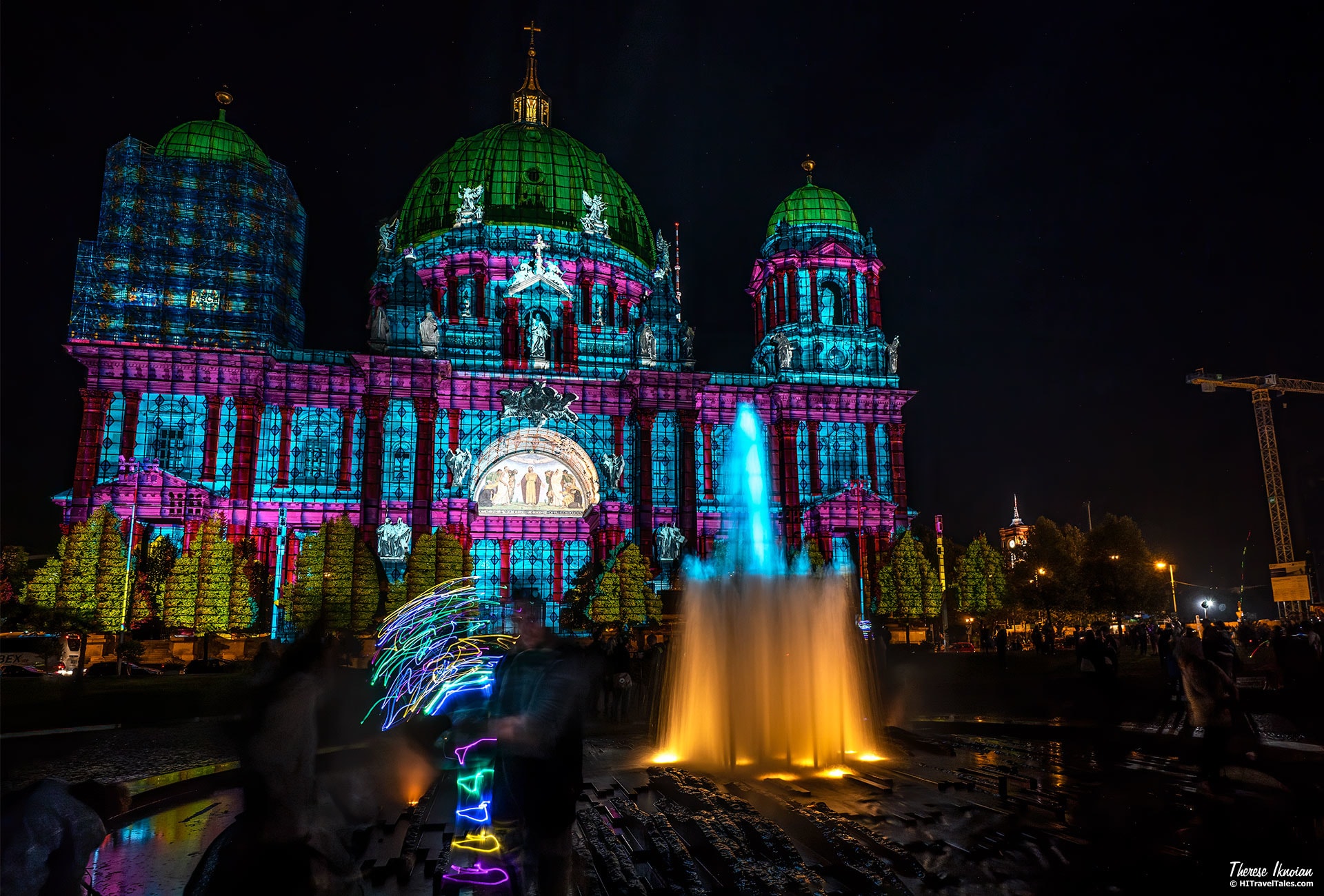 As the luxurious dog days of summer wane, Berliners are dragged toward the dreaded winter of short, dark days. Just in time, a bright diversion appears in October: not one, but two light festivals that illuminate hundreds of buildings, parks, monuments and facades all across the city with dancing lights.

For two weeks in October, when nights can still be warm, but may also bring a harbinger of winter chill, the streets again fill, this time the bait is not the long summer sun, but the darkness – and the illuminations that dark skies allow. 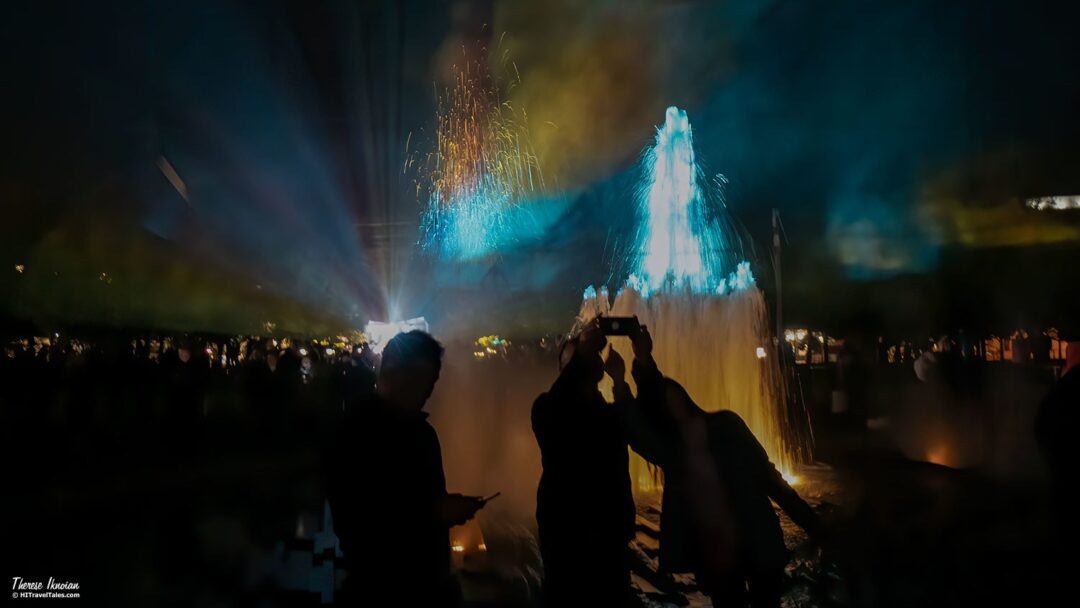 The original light festival in Berlin called, intuitively enough, Festival of Lights, is perhaps a more glamorous, slick and (some might say) commercial endeavor. The other festival, Berlin Leuchtet (“Berlin Illuminated”) was launched by some of the creators of the Festival of Lights. Politics and competition? Probably. Do we care? No. Two festivals in Berlin make for more lights, brighter fall evenings, and double the fun. 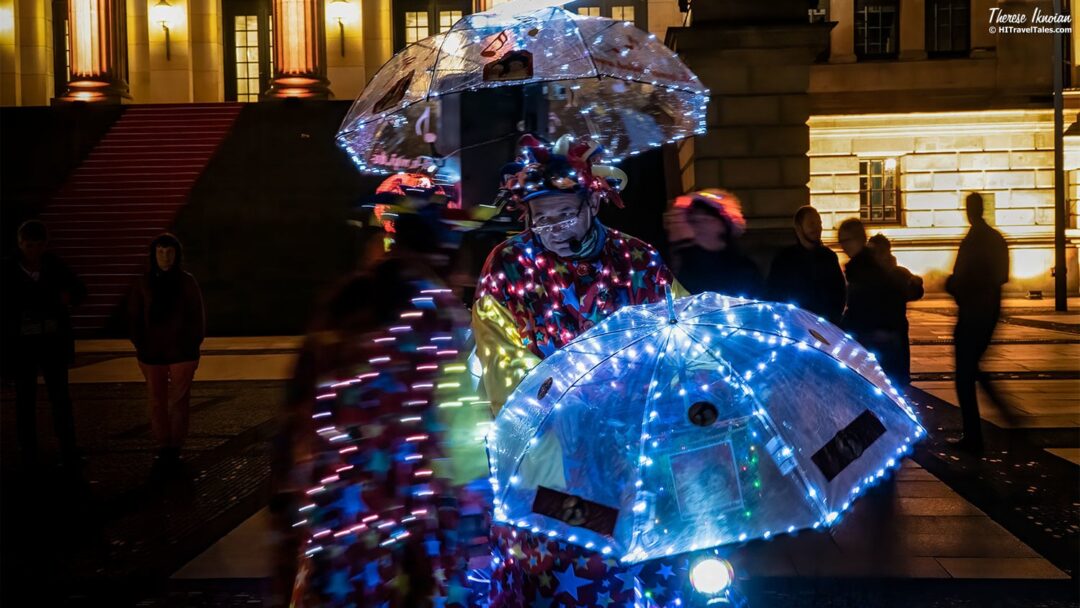 Germans tend to be cooler than in some countries. You don’t just chatter aimlessly with people you meet on the street. You shake hands; you don’t hug. But during the festivals of lights – maybe because of the cloak of darkness that adds a dash of an impersonal nature – things change. It’s like ooo’ing and aaah’ing over a fireworks show or a full moon; you want to point and gasp and share that awe with somebody else – even a complete stranger. 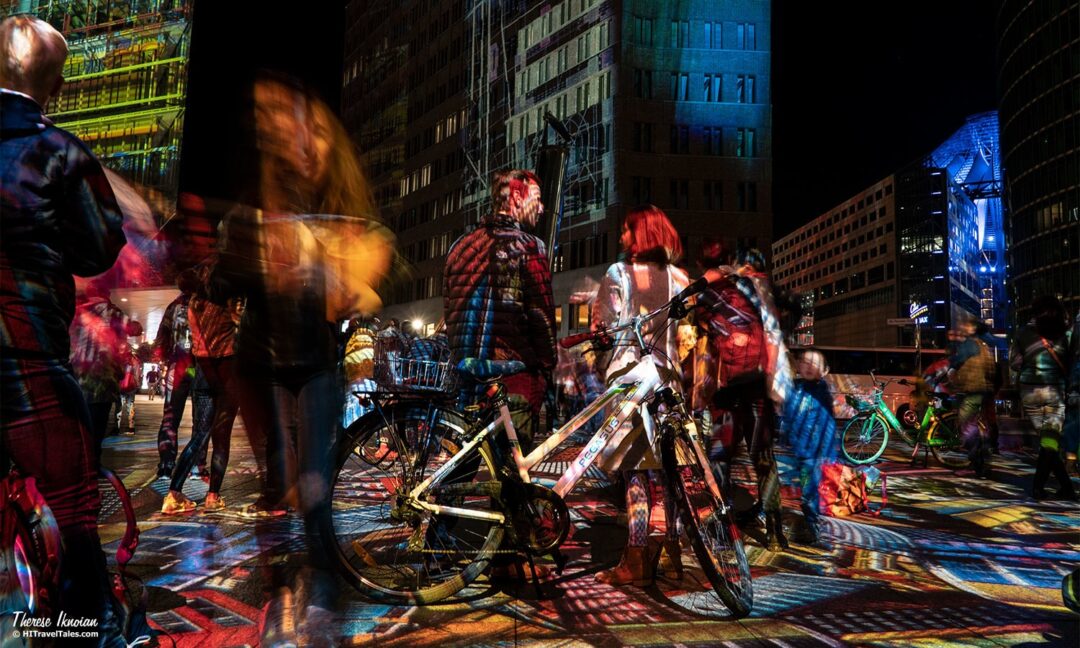 Hundreds of thousands of residents and visitors roam the streets, fill the subways, congregate at key illuminations, and throng squares surrounded by light shows…until the festivals flip the switches off at about midnight (Remember, it is still Germany so one most follow SOME decorum, right?). Spectators of the light festivals are often bathed in ever-changing colors on all sides. Kids romp and reach out to touch rays of light that disappear as quickly as they appear. 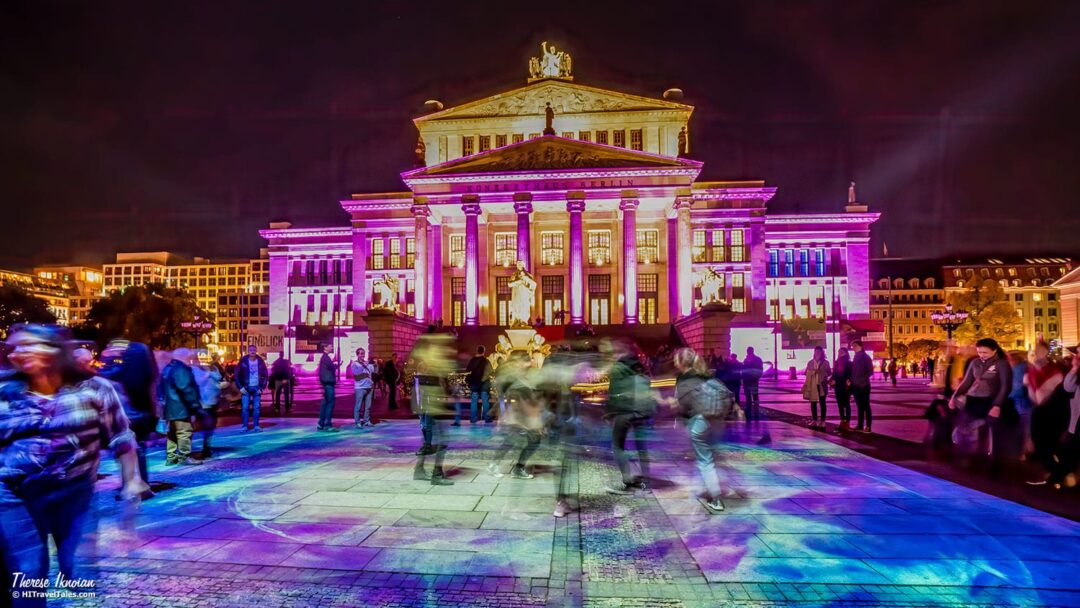 These festivals of lights in Berlin are also a travel photographer’s dream. It’s as if the call went out to everybody who loves to take photographs, especially at night. Packs of photographers, tripods slung over shoulders and gear bags on their backs roam the streets on a hunt for a magical moment caused by the intersection of the right shutter speed, at the right moment, with the right light effect. There are so many effects to capture — so many photographers on the streets. In some places, tripods are set up in a long row, but everybody shares, moves over to give room to the next, or discusses a favorite spot.

Block out your calendar

It may be easy to SAY, oh, I’ll just go check out a few spots illuminated for the Festival of Lights and Berlin Leuchtet on a couple of evenings. Ah, but the hunt becomes addictive. The adrenalin of tracking and capturing one illumination makes you want another and then another. One evening turns into two, and then into a nightly rush. 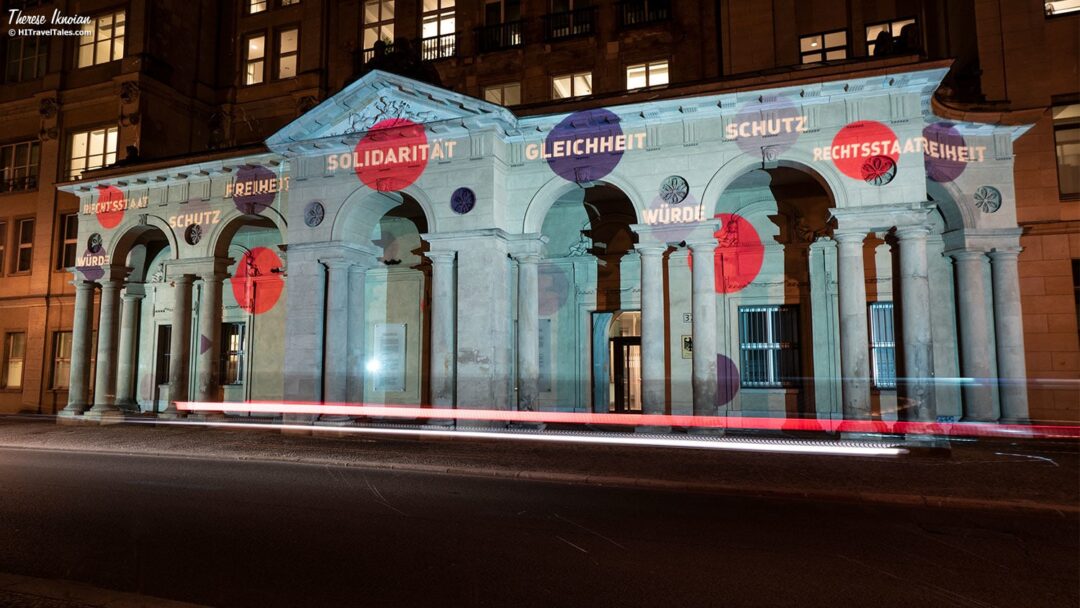 And with so many hundreds of illuminations across the city, you can spend every evening for two weeks and still not see them all. Of course, you want to see the biggest, but sometimes small, more static illuminations during the festival of lights in Berlin can be quite mesmerizing, like the simplicity of small floating boats on a pond slightly hidden behind a building. 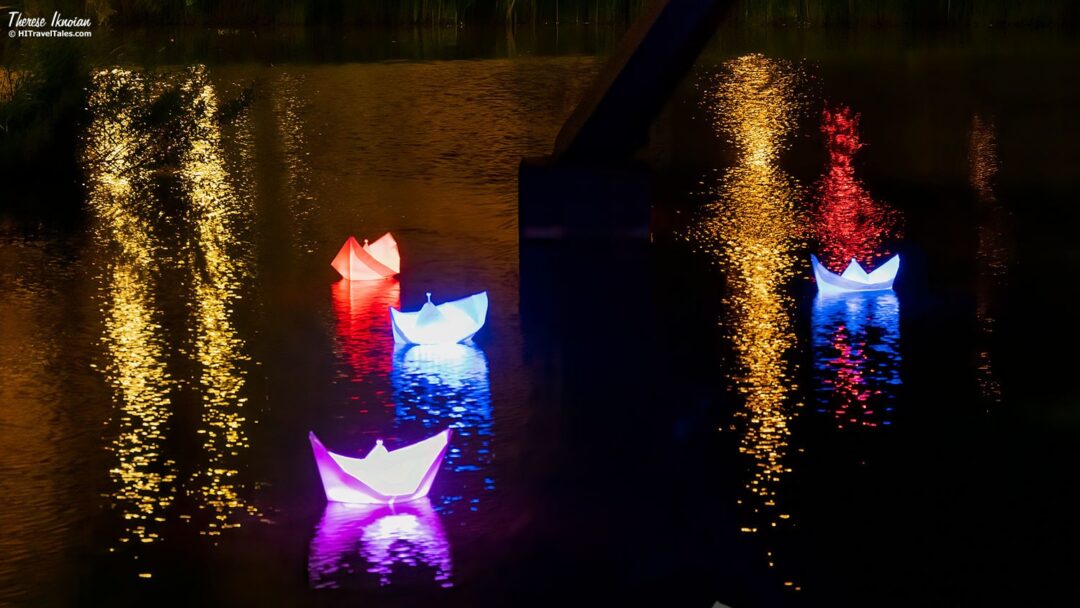 The buildings, facades and monuments illuminated change most years. But one of several constants for the festival of lights in Berlin is the Berlin Cathedral. With such a magnificent and noble building fronted by a garden and fountain surrounded by other grand buildings, how can you miss? The current iteration of the Cathedral was finished in 1905 but its history dates back to the 1400s. It was heavily damaged in WWII with reconstruction starting in 1975. Certainly, the entire building and one or more sides is usually illuminated, but if you catch just the right angle, Berlin’s landmark TV Tower will peek between the spires. The large square in front is called the Lustgarten, and the feeling is magical indeed in the park created in 1646. 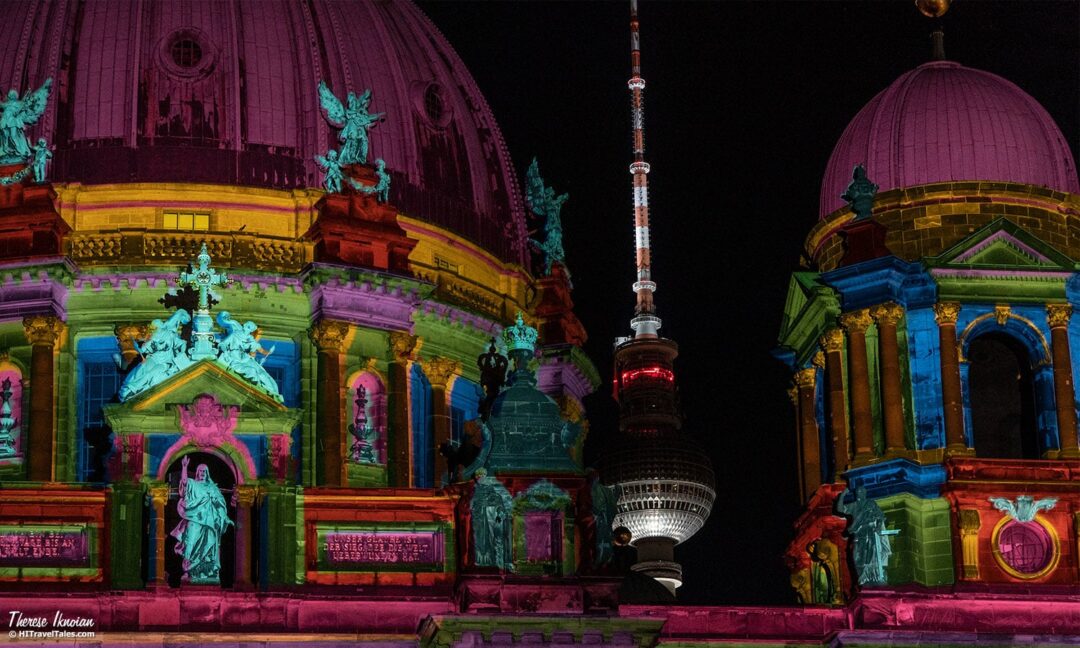 Compared to the peaceful surroundings in the Lustgarten at the Berlin Cathedral, you then have another huge magnet at the prestigious Bebelplatz. You are surrounded by majestic buildings all illuminated from top to bottom, leaving your head swiveling to catch it all as it twinkles and morphs. With so many illuminations in the surrounding area, both Bebelplatz and Gendarmenmarkt sees busloads of tourists, group festival of lights walks, and full-scale action. Less peaceful than the cathedral but nonetheless breathtaking. 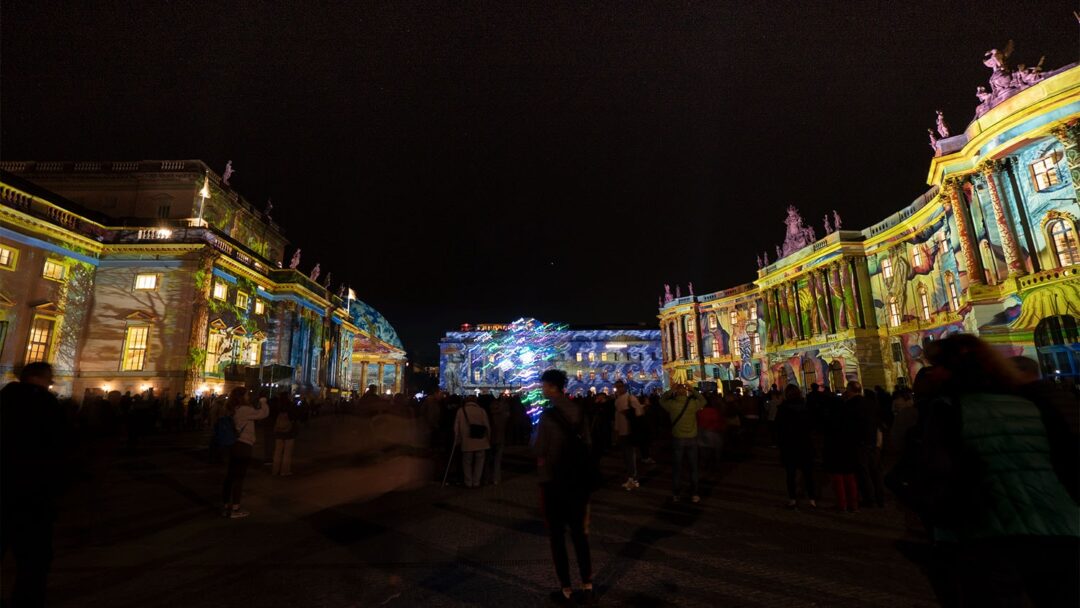 The Bode Museum, situated on a much-photographed corner on Museum Island, begs you to sit and watch on a stroll along the Spree River — you and thousands of your best friends of course. 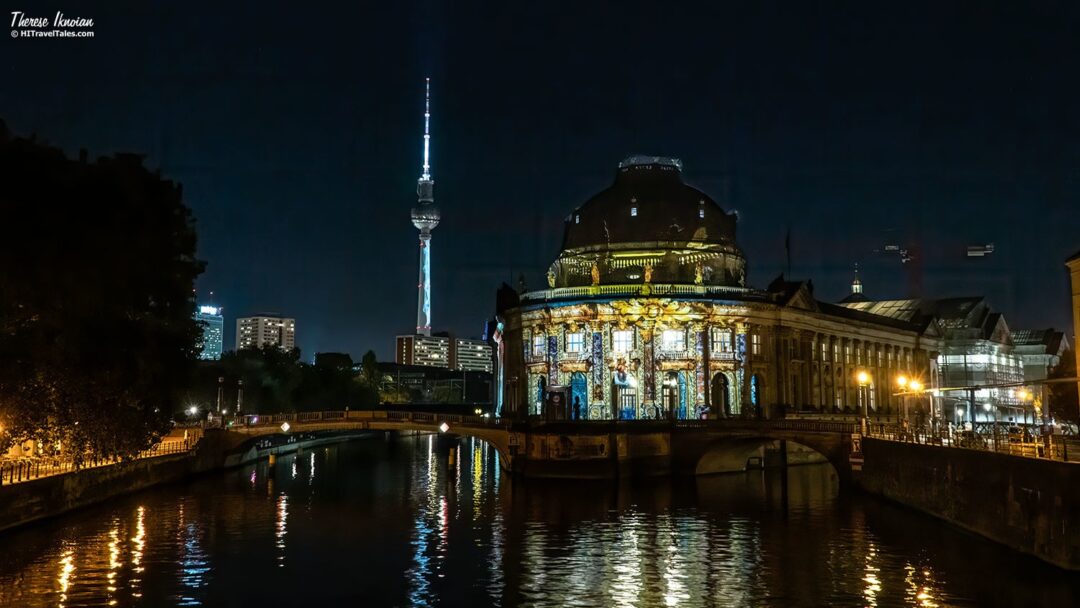 The must-see Brandenburg Gate, once a landmark when it sat in “No Man’s Land” between East and West Berlin, is now a gathering place for tourists and residents, alike. Its columns and horse-drawn chariot on top with the goddess of victory at the helm are invariably lit and accompanied by music. In 2018, the illuminations told a story of the history of the planet and its animals. Elephants galloped toward you then disappeared, the Berlin cityscape danced across the top then faded, and a giant panda was on the prowl between columns. 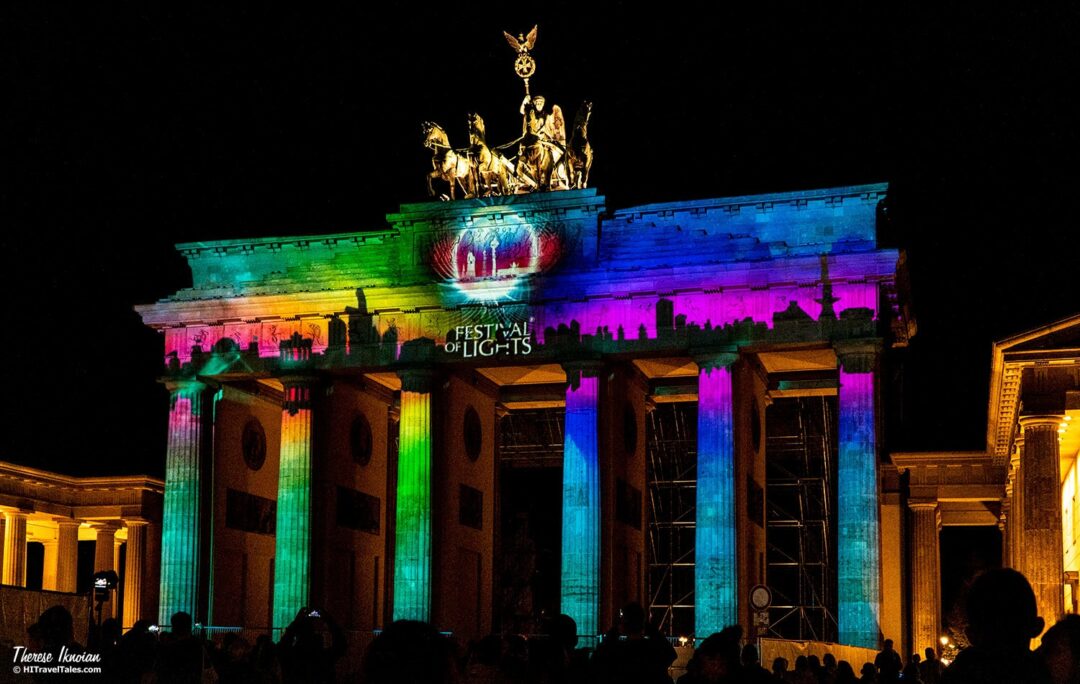 And of course, there are performers, some official — some not so much. The Flow of Fire troupe performs most years on Gendarmenmarkt on weekends, drawing a huge crowd for a couple of fire shows each night. 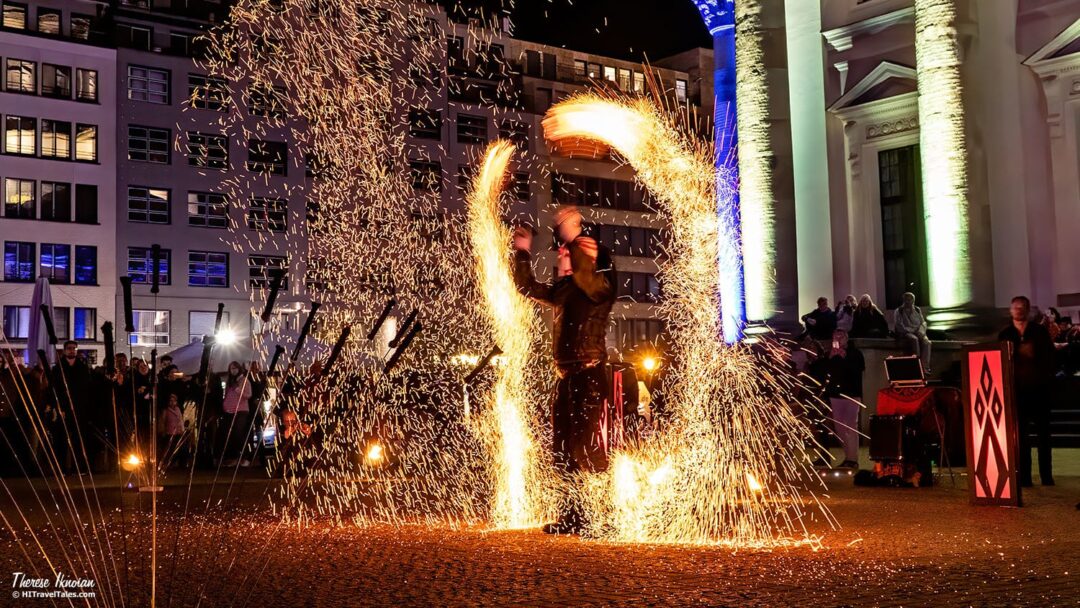 Of course even the streets and sidewalks are alive with lights. Pedicabs and bikes are decked out with LED strings, while kids (and a few adults) buy LED bracelets and balloons. These lights can add to the levity. Catch the lights just right on a camera with a longer exposure and there are playful smears, streaks and dabs. 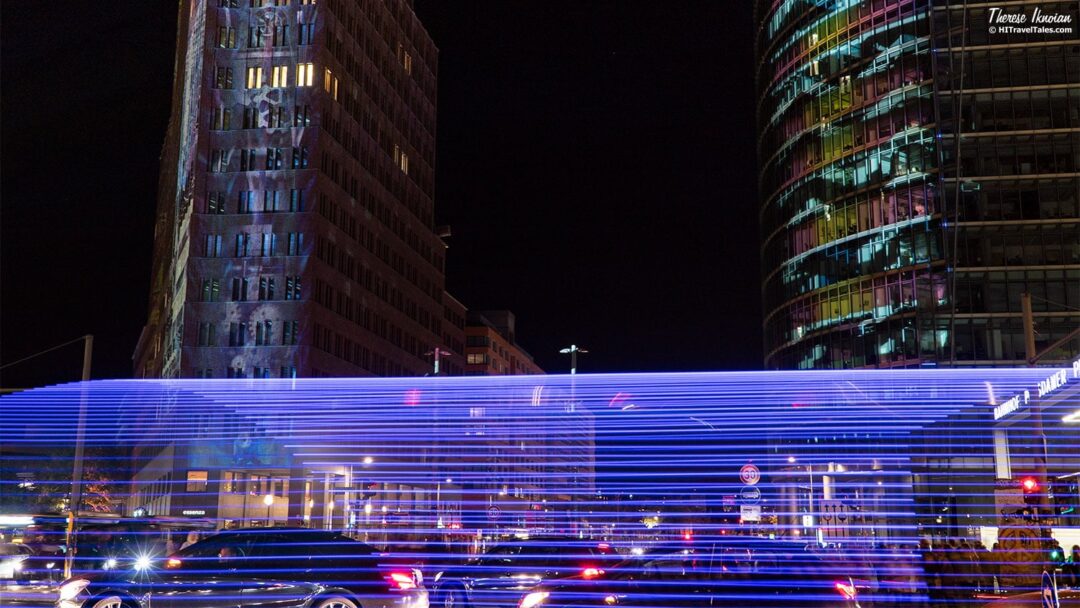 In 2019, Berlin Festival of Lights will run Oct. 11-20, and Berlin Leuchtet from Oct. 9-20 (Leuchtet’s German website version is fuller than the English one, so check here for additional information and maps. And don’t miss the landmark Victory Column (Siegessäule) in the Tiergarten if it is illuminated as it was in 2018. As another illumination said, “Life is short, let’s make it sweet.” Not one, but two festivals of lights in Berlin are sweet indeed. 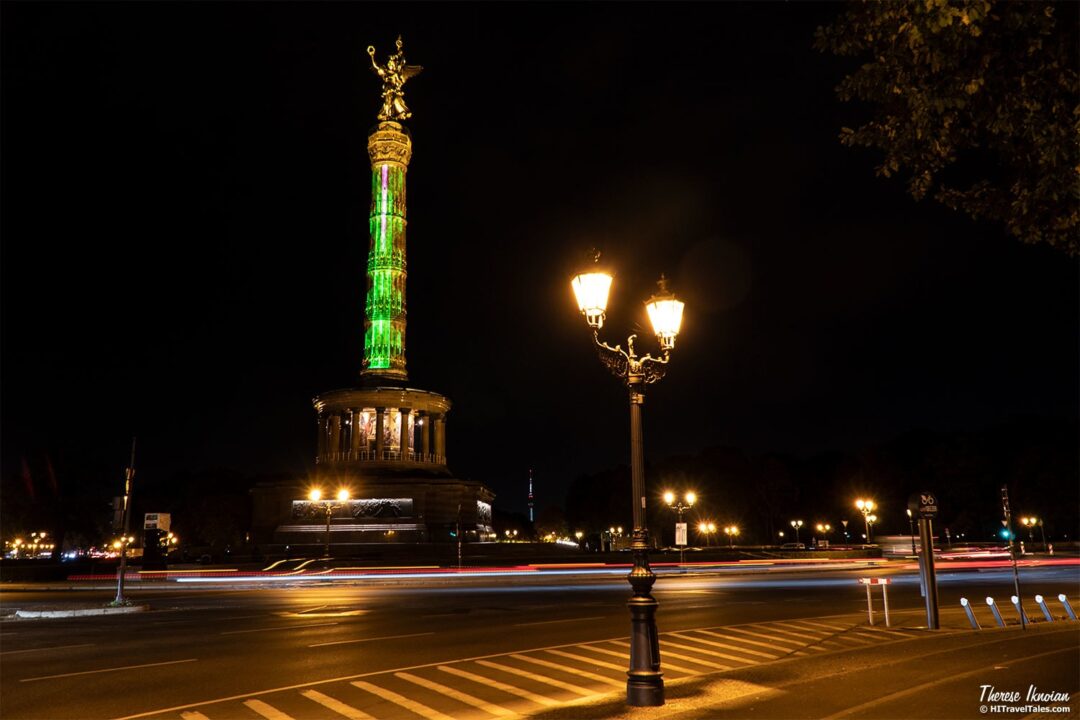 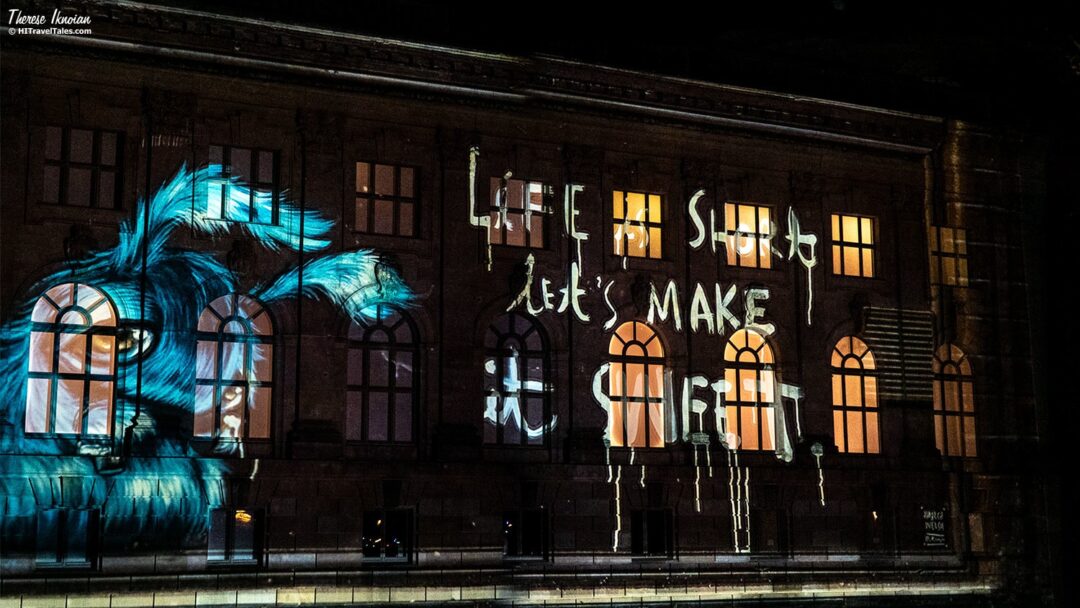 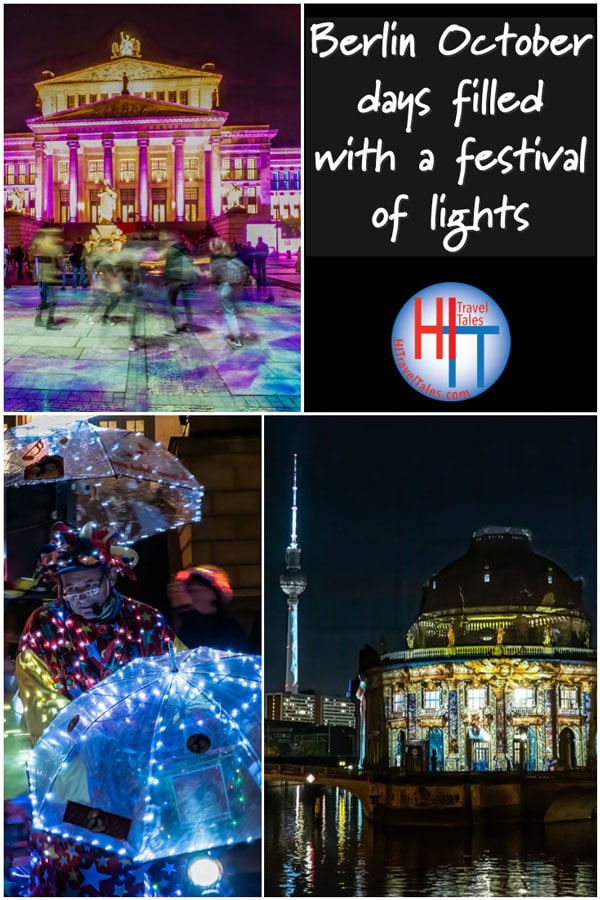 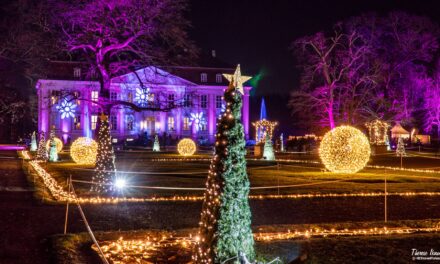 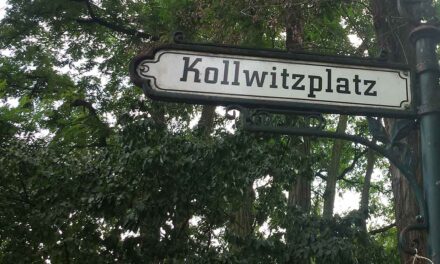 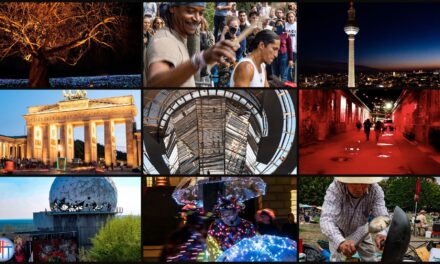 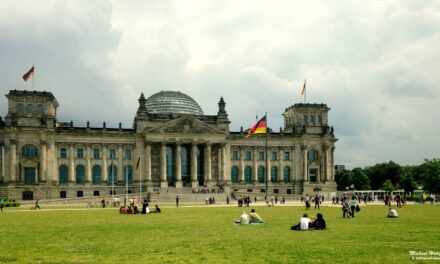