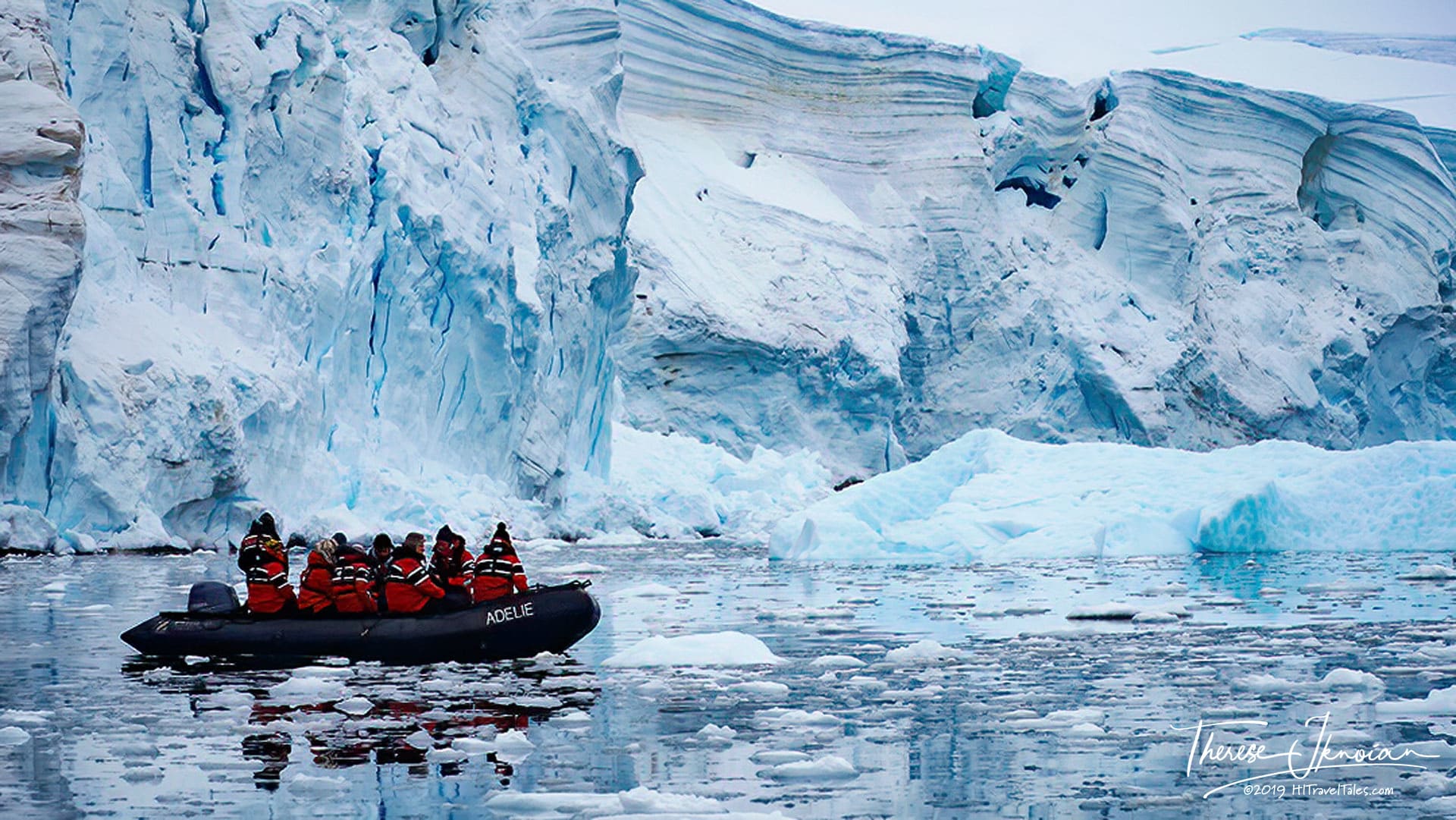 It was the slap of kayak paddles that snapped my head around. We were floating on a Zodiac, engine silenced, in the middle of Paradise Bay Antarctica. At the behest of our boat driver, everybody on our raft with 10 people was doing his or her level best to sit still, listening to the Antarctic silence – at least as much of it as we could muster between the squeaks of boot soles over rubber tubing and the rustle of waterproof jackets on restless passengers. Admittedly, it is hard to sit quietly when in every direction, there is something magical to look at and marvel over.

Paradise Harbor or Bay (its name, depending on what map you are reading or guide you are listening to) sits just off the Antarctic Peninsula and is protected both by the peninsula itself and several islands just offshore. Steep mountain slopes lined with curtains of blue-, white- and greenish-colored glaciers are reflected in calm, steely waters dotted with floating ice bits. It is truly one of the most scenic and pristine spots imaginable, which is why nearly every Antarctica cruise makes a visit here.

My wife, Therese Iknoian, and I were lucky enough to be part of a Polar Latitudes’ expedition cruise that set out in late February 2018. On Day 6, the morning started off misty and gray, but that did not dampen enthusiasm for cruising around on Zodiacs into Paradise Bay Antarctica. A small contingent of our group — those signed up for kayaking — had headed off prior.

Our Zodiac left the ship shortly after the kayakers, and soon we were gliding alongside steep rock cliffs, dotted with the nests high above of blue-eyed shags. As I listened to the cries of the shags while they swooped and dove on and off their nests, I was also mesmerized by the colors and texture of the rocky cliffs slipping by – emerald green moss, dark black and gray stone, orange and yellow lichen and, in places, blueish-green streaks from copper deposits. 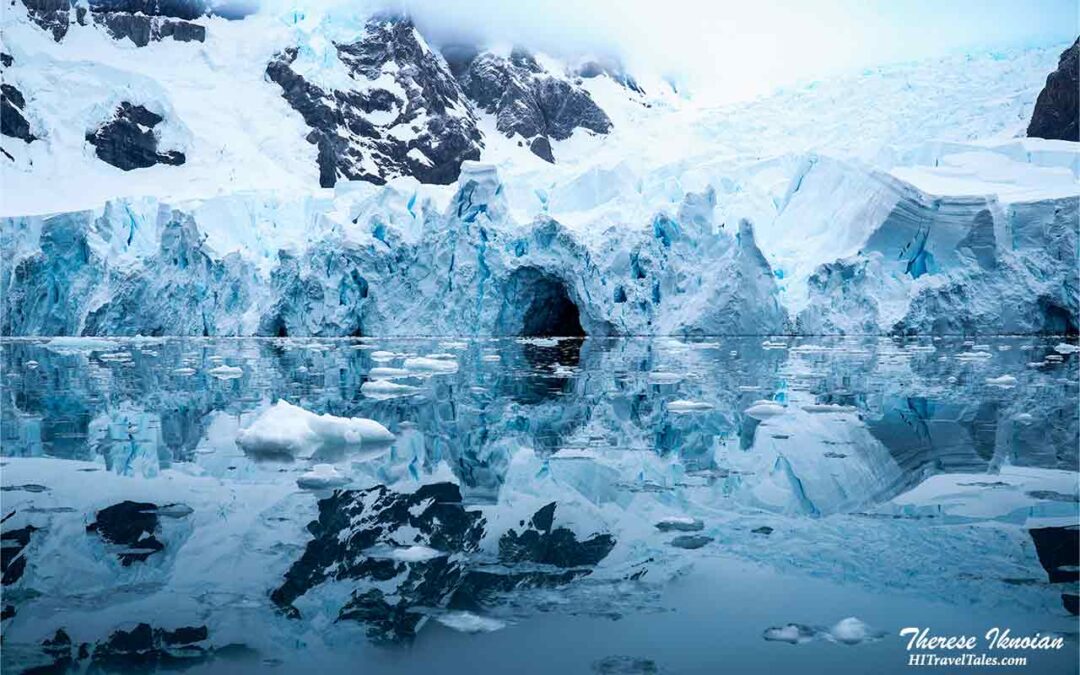 In front of us, a huge glacial wall of fissured ice rose out of the water, and a yawning ice cave beckoned us, teasing the imagination. But to get too close to a glacier in the ocean, even a place named “paradise,’ would be inviting disaster. Ice regularly calves off walls, falling into the waters below with a thunderous roar. Any boat too close risks being swamped by the resulting waves or, worse, crushed by the weight above. We would float a safe distance away to watch and listen.

And in listening, one learns that an Antarctic silence is not so much the absence of sound. As we sat with the engine turned off, we could hear the crackling of the glacial ice, the cries of shags and terns dipping and soaring above, the creaking and rumbling of floating ice chunks grinding together, the lap of water against the shore and our boats. A nearby splashing from several Gentoo penguins playfully porpoising near our boat brought smiles. The slap of kayak paddles on the water that we heard from a distance seemed so out of place. As I spun around to watch several of our kayaking compatriots glide by, paddles flashing in rhythm, I found myself understanding what was meant by Antarctic silence. It is simply the absence of human sounds – no engines, voices, horns, ringing tones, clattering noises, or humming and clicking cameras. 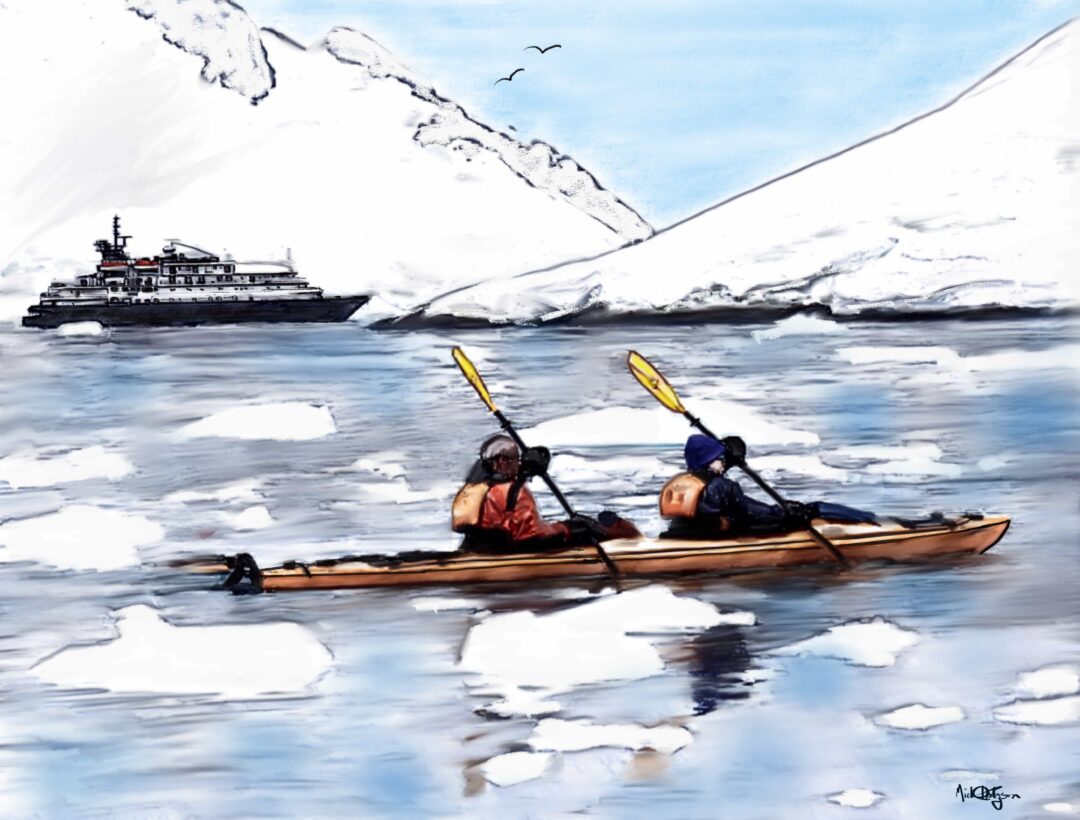 “Antarctic Silence” was sketched and painted on my iPad. If you like my art, you can show appreciation by supporting my work through a purchase here — on my art website at Fine Art America. This image is available in all sizes and suitable for framing. It is also available on coffee mugs, pillows, smartphone cases, notecards and more.

We sat still for a while longer, watching the kayaks slip away. The longer we sat, the more the silence enveloped us. Off in the distance, I could see our ship. The serenity of the scene was unforgettable, and one that I tried to capture with my artwork, above. It is the unadulterated purity of the landscape, draped in a curtain of subtly contrasting colors and visual textures, combined with the natural silence that makes Antarctica such an addictive, restorative place to visit.

Yes, it is true that Antarctica is the coldest, windiest and least-populated of any of the world’s continents. It is wilderness in the truest sense of the word. It is also a continent protected by an international collaboration that is, especially when seen through the lens of past and current global conflicts, unprecedented. And it is home to some of the most amazing wildlife imaginable – penguins, seals and whales to name but a few. For all of these reasons, and hundreds more, Antarctica worms its way into your soul. Its silence becomes a call you will hear in your dreams forever.

Want to visit Antarctica? There are many companies to choose from when booking your travel to Antarctica. We recommend Polar Latitudes from personal experience, and Journeys International from having worked with them.

Here are several guidebooks on Antarctica we recommend:

If you are a member of our Subscriber Club you can download Michael’s original artwork, Antarctic Silence as a printable PDF here.  Not a member of our Subscriber Club yet? It is easy and free to join. Just click on the button below. In addition to full access to our free travel book and recipe library, you will receive a monthly newsletter full of travel inspiration from award-winning travel writers and photographers. 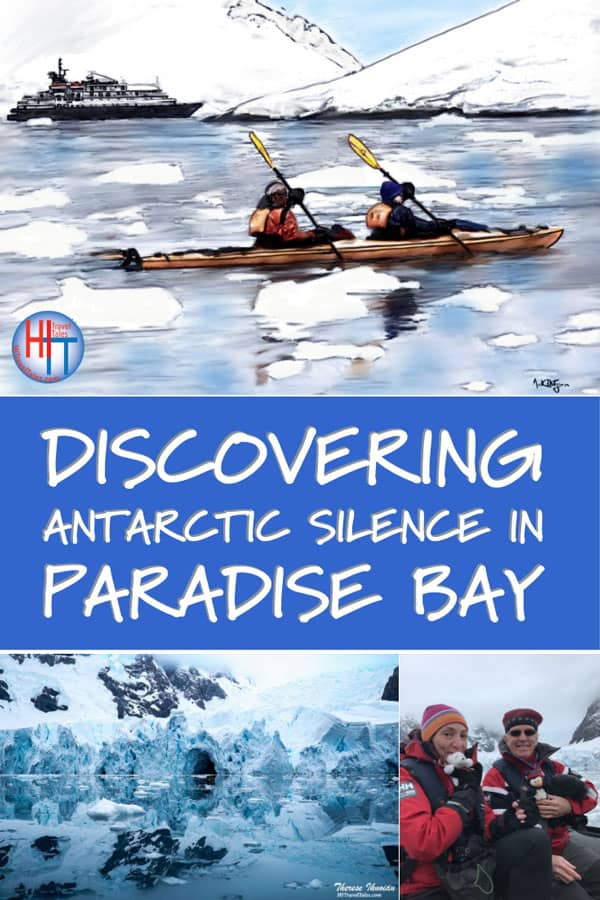 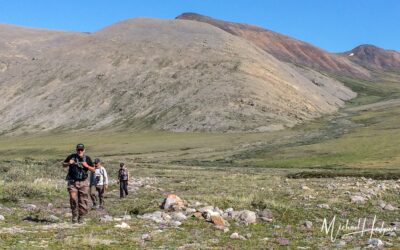 Hiking checklist: 11 essentials for hikers anywhere in the world

From road trippers to adventure travelers, everyone who heads out on a hike needs to pack along emergency gear to keep them safe if things go wrong. The 11 essentials for hikers are items that are easy to carry and pack, and might just save a life – yours. 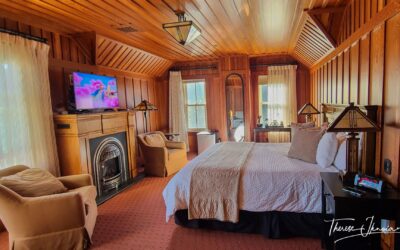 Tucked onto a bluff overlooking Noyo Harbor in Fort Bragg, California, the Noyo Harbor Inn offers a secluded escape with a surprisingly accessible location along Highway 1. 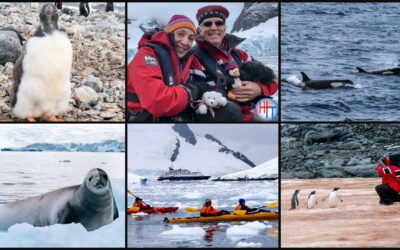 Venturing to the southernmost continent of Antarctica is a bucket-list adventure for many with its endless ice, beautiful blue waters, and wildlife like penguins and whales. In March of 2018, we joined a Polar Latitudes expedition to Antarctica and have assembled here a collection of some of our favorite Antarctica photos shared on Instagram. 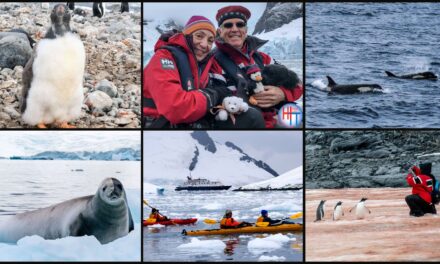 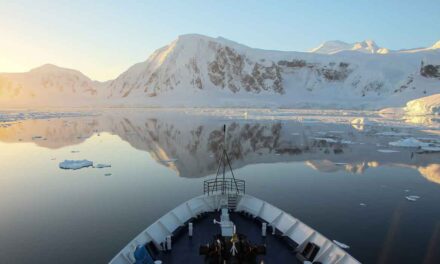 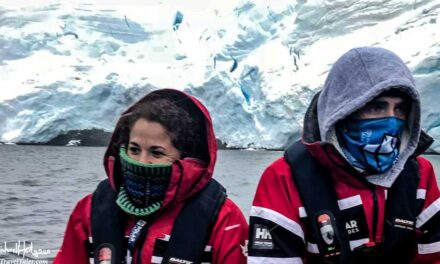 Five tips to know how to stay warm in Antarctica