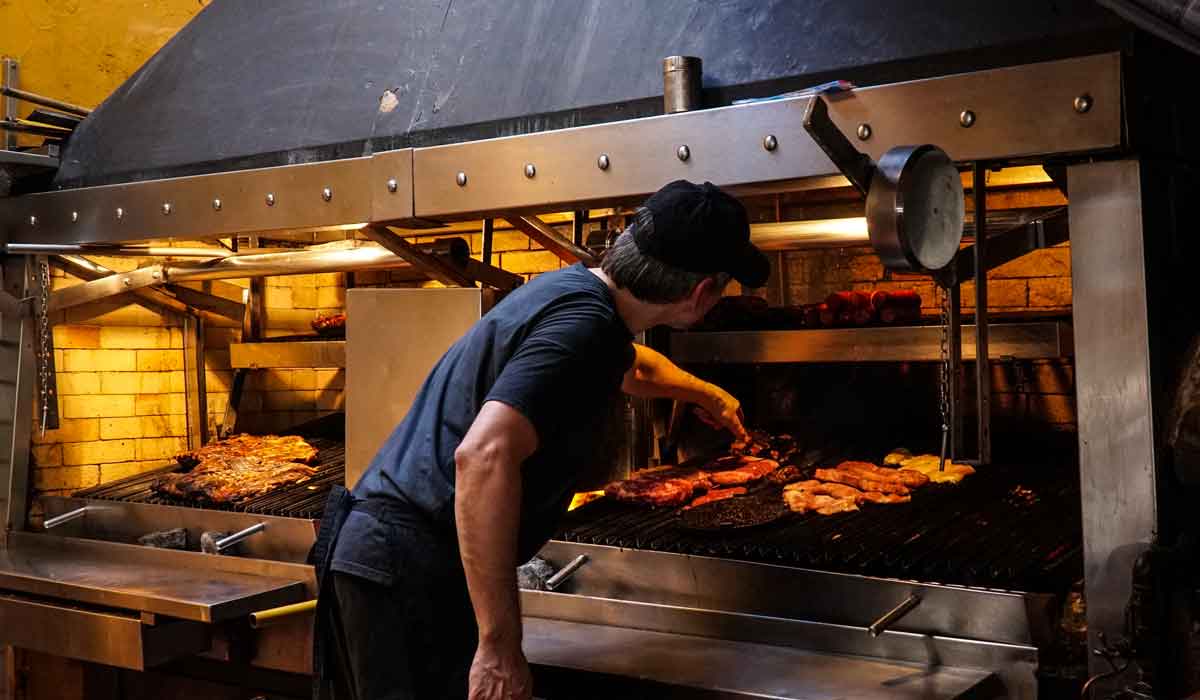 The gasometer in Berlin is the only one in the world you can climb, but it must be with a guide. Take a tour to the top of the gasometer in the Schöneberg neighborhood to experience some of the best views of Berlin, see many of the city’s important landmarks, and learn about Berlin’s history.

Land in any sprawling metropolis as a traveler and finding your through the maze of restaurants, foods, potential language differences and neighborhoods is always a daunting task. That’s where a parrilla food tour can help in Buenos Aires, specifically THE “Parrilla Tour.”

Certainly we expected good food and drink on our Parrilla Tour, but what we got was so much more. Over three hours walking between four establishments in a central Buenos Aires neighborhood, our vivacious guide German Landa taught us everything from how to eat an empanada to how to pronounce “parrilla” (meaning barbeque or grill) like a local. We left energized, filled with satisfying authentic flavors and foods, and ready to tackle the eateries of Buenos Aires on our own. 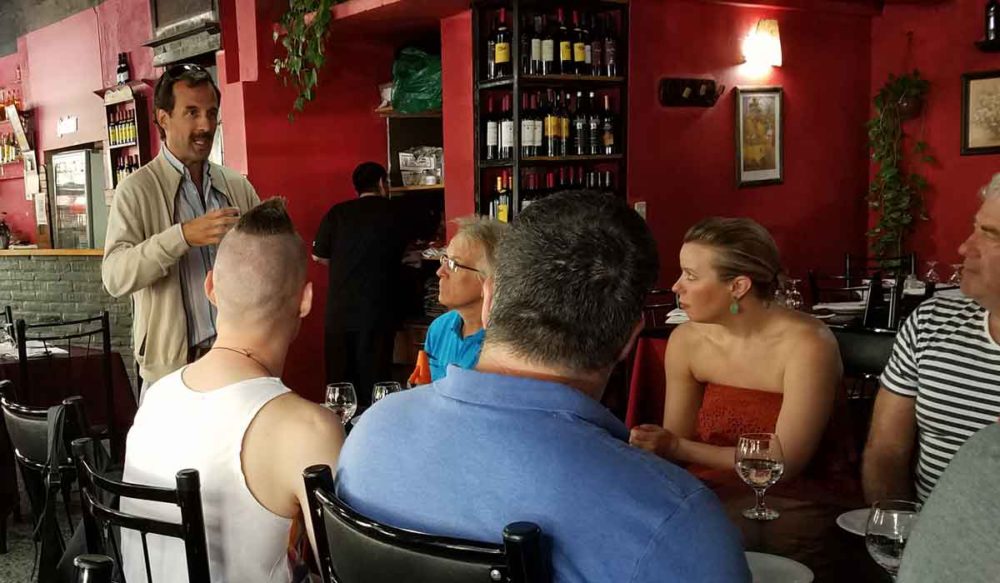 Guide German Landa explains the history and culture behind the dish we are about to be served.

HITT Tip: The “ll” in most Argentinian Spanish is not pronounced like anywhere else, Instead it is a “sh” sound, wather than a “ja” sound, so parrilla is – yes really – “parESHa.” Thanks, German the tour guide (pronounced “Herrrrmann” and please roll that “r.”)

Begun five years ago by Argentinian Santiago Palermo and U.S. expat David Carlisle, Parrilla Tour today offers food tours (in English, of course) in two neighborhoods of Buenos Aires – Palermo and San Telmo. In addition, Parrilla Tour customizes private or small group tours to any traveler’s tastes or interests, from certain types of foods, restaurants, neighborhoods or wine (Carlisle initially came to Argentina frequently as a U.S. wine importer so he knows a thing or two about it).

“The food tour is about wanting to connect with locals and real authentic flavors,” Carlisle told us as we finished up our tour with ice cream (a real specialty in Buenos Aires). “We want people to have a good time, be relaxed, and spend a fun three hours while getting a great introduction to the city and its foods and culture.” 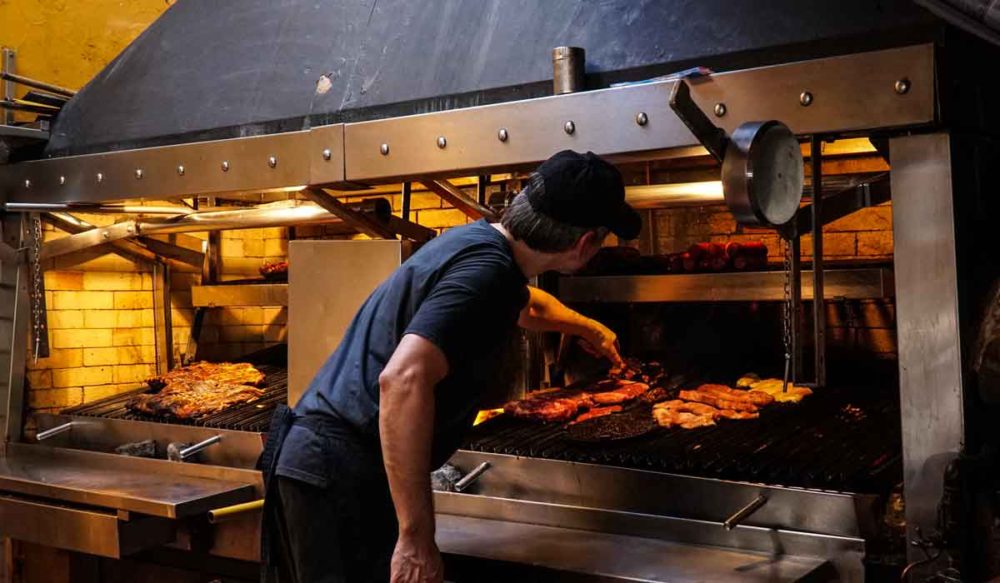 Meat from the grill (parrilla) is something that Argentinians truly love — and you will too.

HITT Tip: Take one of these parrilla food tours your first or second day in Buenos Aires (depending on what time you land!). Why, you ask? Because you get so many cultural and language insights on your food tour in Buenos Aires that you will gain knowledge that will benefit the rest of your stay.

We took the tour our first full day in Buenos Aires. Still feeling a little jet-lagged and not feeling ready to pig out on steak and drink wine, we hoofed our way to the meeting point in the outer reaches of Palermo in a “barrio” (neighborhood) called Las Cañitas. From the moment German, the guide, greeted us we knew this was going to be special. He ideally mixes a little Spanish into his perfect (and totally enthusiastic) English so you learn some words along the way too. 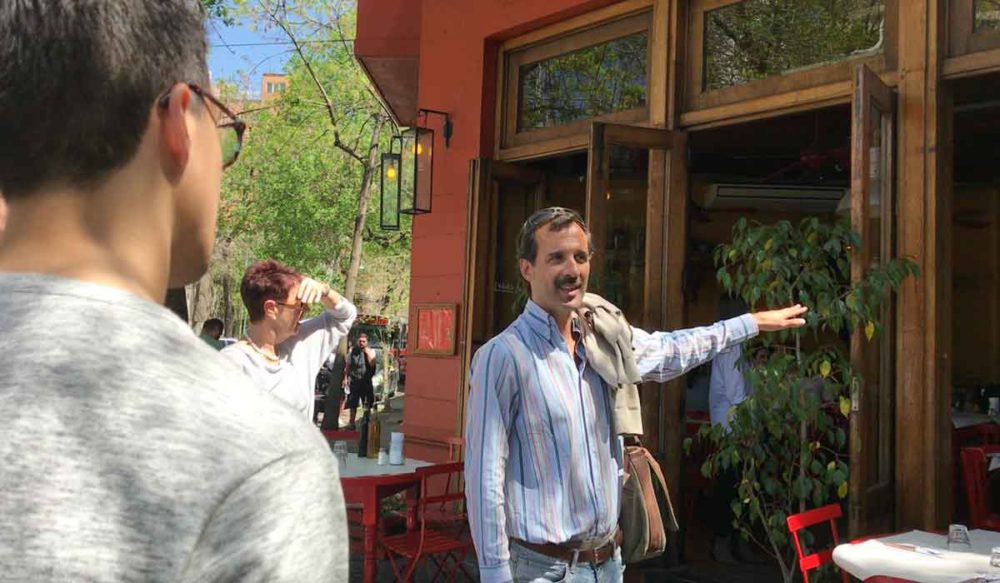 German Landa gives us a quick intro to the restaurant and its history in the neighborhood before welcoming us inside.

Not sure how to say something? Ask. Curious how they cook the meat? Ask. Wondering about the culture of tango? Ask. Are you getting the point? This is a food tour on steroids – language, nightlife, traditions, customs, drink, history, you name it, you can learn it. Just ask.

Not only that, you will do your learning with a maximum group of about 12-14 from all over the world. Our tour had a total of 10, with people from Japan, Australia, New Zealand and the United States (Florida and California). German, our guide, says every tour is different. Some just want to know about food, some wine, some want to talk politics.

Custom and private tours if you really want it your way

Parrilla Tour co-founder Carlisle said they are offering more and more custom tours so people can get precisely what they want, with their friends or family alone, in a much more private setting. Plus, you can pick different neighborhoods, a street market, or food trucks if you want. Everything is possible. The typical set tour lasts about three hours (although a private one could be any length of course).

What does the typical tour consist of? First of all, it is a walking tour. Between stops, you’ll cover a several blocks in the neighborhood, during which time your guide will tell you about things you pass by or other restaurants along the way.

Stops on the tour:

Choripan – Although translated as “sausage sandwich” and one of several typical snacks, the choripan restaurant Parrilla Tour includes on its food tour is special since it uses only beef, which is unusual. Your guide will explain the spices and sauces (Chimichurra and Creolla – remember the “ll” is pronounced as an “sh” so this becomes “cree-oSHa”), which is a fresh-chopped salsa. Not what we expected when we heard “sausage sandwich!” 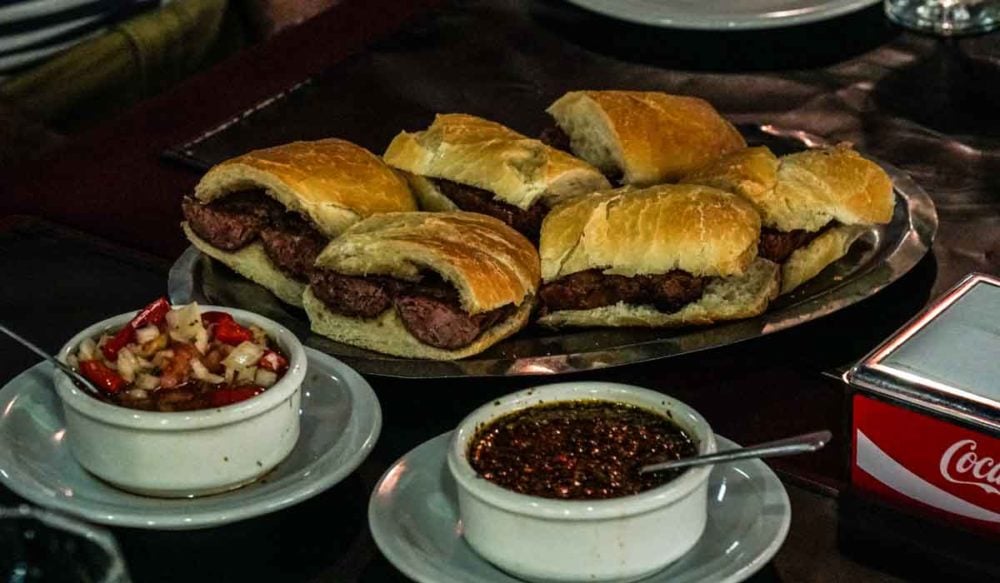 Empanada – Another typical snack or even small meal, an empanada is like a little filled pastry pouch. The restaurant this food tour in Buenos Aires frequents bakes its empanadas (some are fried) and is more typical of Northern Argentina. These are so much yummier and lighter than we dreamed, which lead me to drop into bakeries for empanada snacks during our stay. Wine accompanies this course – a traditional Torrontes. The slash marks baked into the top of the empanada reveal what is inside, by the way. 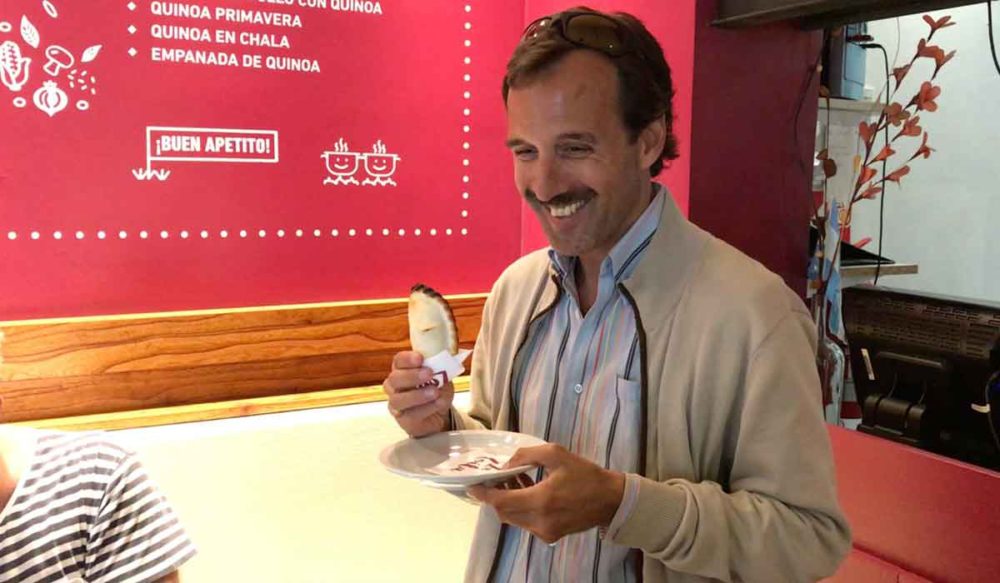 Parrilla – Yes, the hallmark of the tour is the grill restaurant where you will get great slabs of different cuts of beef, as well as fries, mashed squash and potatoes, salads, and other yummy grill goodies. Oh, and wine. Malbec, of course. Eating our main course at 2 p.m. meant the Porteños (the name for those who live in Buenos Aires) are just arriving. Meat here we learn is usually cooked “more than well done,” as German put it, but he orders it more medium for us. Even vegetarians can find grilled vegetables and other goodies. 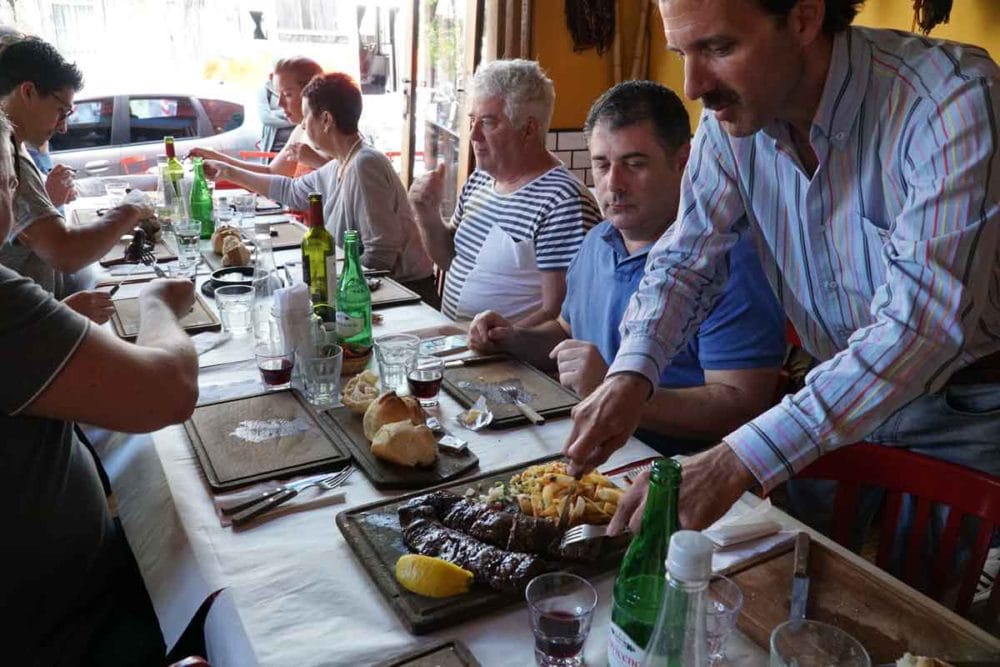 Helado – Ice cream, which is more like a gelato and beloved in Buenos Aires. Our heladeria is not a chain and has a lot more than the “31 flavors,” which makes the choice really difficult. Yes, a yum way to end the food tour. 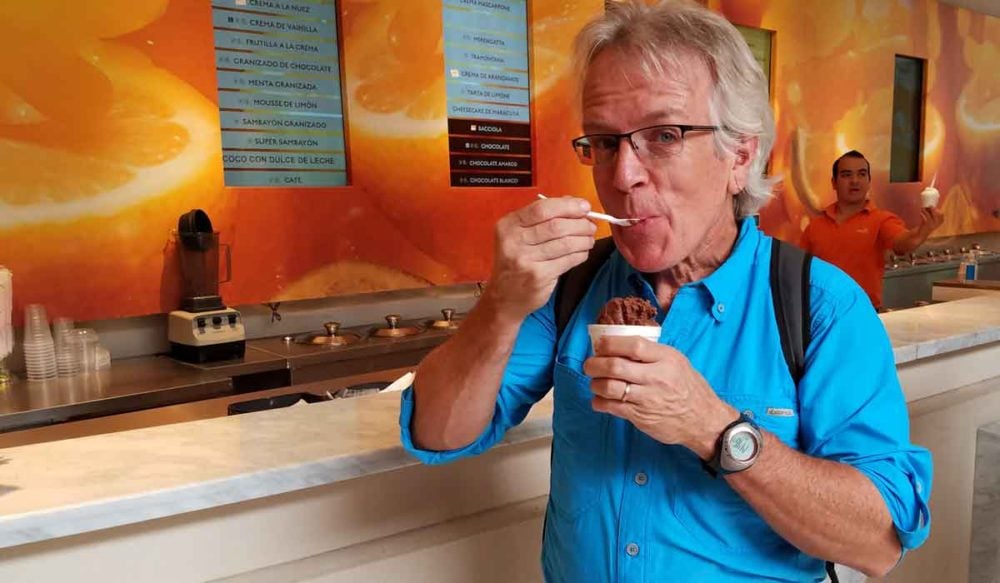 Worried you will be too stuffed to enjoy? Not really! The first sandwich is a tiny appetizer-size piece, and the empanada is also small. Of course, you could pig out at the steak place – if you want. Still, the meal is spread over three hours interrupted by short walks.

HITT Tip: When heading out on a parrilla food tour, don’t bother with breakfast other than perhaps a Café con Leche (coffee with hot milk) and a few “medialunas,” which are a smaller, croissant-shaped bread with an edge of sweetness.

Book this tour prior to arrival at Parrilla Tour, particularly since they don’t happen every day, or email info@parrillatour.com for more information or to schedule a private or custom tour. Oh, and this is a tour of, well, meat, but if you are vegetarian or have other special food needs, email in advance and they can try to accommodate you. 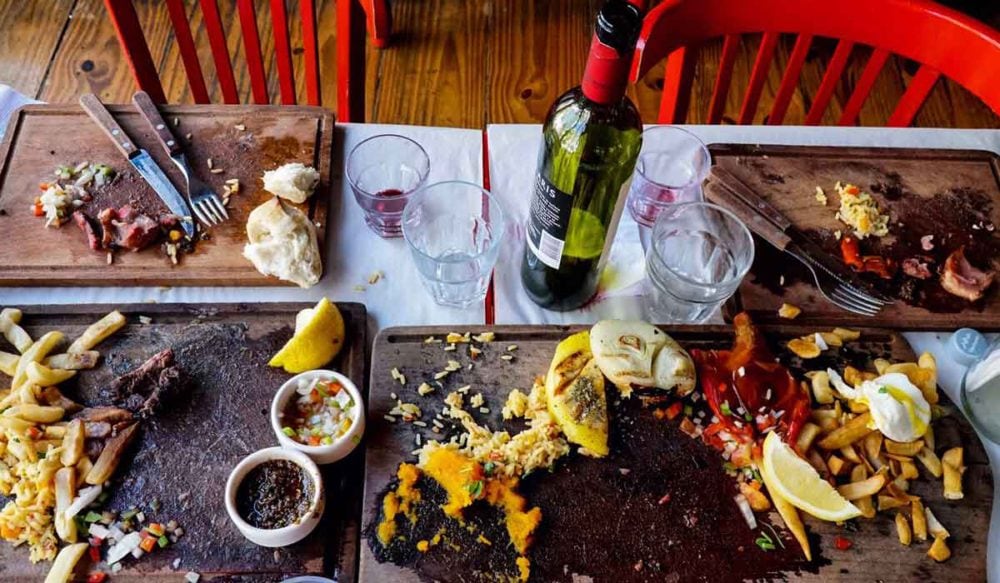 All that remains after our next to final stop — meat, meat, wine, more meat, egg, potatoes … YUM!!!

What you should know: Parrilla Tour provided us with a discounted rate for this parrilla food tour. Despite this, we maintain complete editorial control when working with any tour company or tourism board. All photographs, videos, descriptions and opinions in our articles are our own and are in no way influenced by sponsorship or trip discounts. Any way you slice it, this was truly a yummy experience.

Discover more great things to do in Buenos Aires 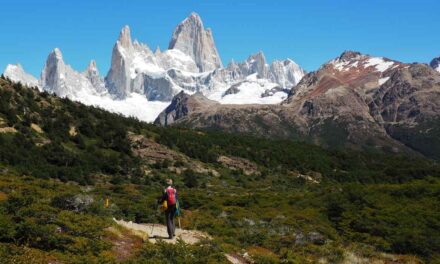 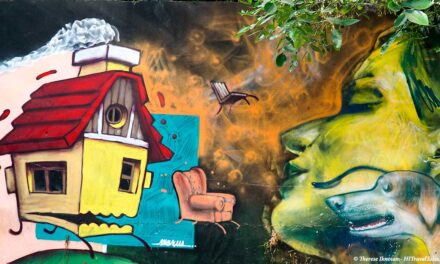 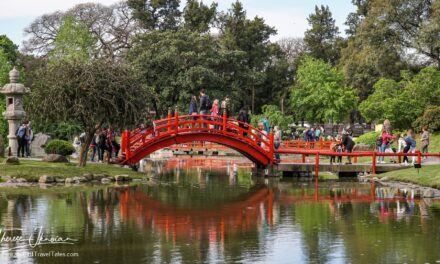 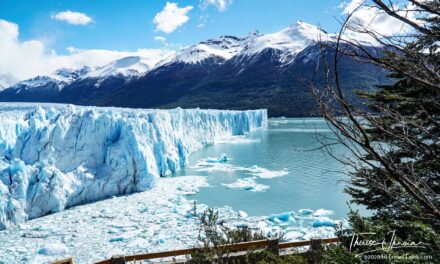 A guide to the best of Patagonia, Southern Argentina